Shanghai Shenhua and Shanghai Port clash in the Chinese Super League on Wednesday, June 8th. Local rivals Shenhua and Port battle it out for points and bragging rights this week. Read our free predictions and find the latest odds for the fixture below in our detailed match preview.

Shanghai Port have had the upper hand in recent derbies and they will kick-off Wednesday’s tussle with Shenhua as favourites to prevail. Read our top three predictions for this week’s fixture below.

Shanghai Port have been the dominant force in recent derby fixtures against local antagonists Shanghai Shenhua and their run of 11-straight meetings with their rivals without defeat should arm them with the impetus to get one over their neighbours again on Wednesday. Port were resounding 5-1 winners when they last visited the Hongkou Stadium for a cup contest in November and they can push for more glory here. Early-season games can be a tad more unpredictable however, so side with Port in the draw no bet market for added insurance.

Shanghai Shenhua and Shanghai Port have regularly traded blows and goals in recent derbies despite the largely one-sided results in the latter’s favour and action at both ends looks possible again in Wednesday’s game. BTTS has landed in four of the last five skirmishes between the city rivals and we’re tipping that pattern to continue this week.

View our list of the top stats for Wednesday’s Super League fixture below alongside a tool to help you choose the best odds.

A second half penalty from Zhu Chenjie allowed Shanghai Shenua to open their account for the season with a win at Guangzhou FC last week, though they should find it tougher to follow up that victory with another on Wednesday. Liu Ruofan was withdrawn early in that fixture with an injury and the forward is a doubt this week.

Shanghai Port endured a nightmare start to the season when they lost with ten-men at home to Wuhan Yangtze River. Xu Xin was dismissed just before the break in their defeat and the attacker will sit out Wednesday's match through suspension as a result. 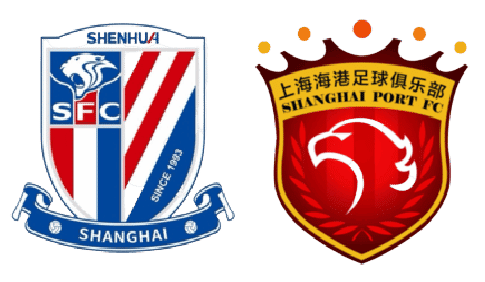 The bookies have priced Shanghai Port as their favourites to win this week.