Shanghai Port and Hebei meet in the Chinese Super League on Tuesday, July 4th. Port are aiming to beat Hebei for the second time this season. Read our free predictions and find the latest odds for the fixture below in our detailed match preview.

Hebei have lost six of their first seven matches of the new Super League season ahead of their tussle with Shanghai Port on Tuesday. Read our top three predictions for this week’s fixture below.

With match result odds not worth pursuing here, a stake on under 2.5 goals is favoured instead when a goal-shy Shanghai Port side take on serial losers Hebei on Tuesday. Port are averaging just one goal per 90 minutes this season and while they did net twice when the beat Hebei 2-0 in June, their game-closing second strike didn’t arrive until the 80th minute. We don’t expect a deluge of action here, so back under 2.5 goals to be notched.

Senegalese attacker Cherif Ndiaye has scored four of Shanghai Port’s seven Super League this season himself and the 26-year-old managed to net three of those in his last three appearances. Ndiaye also made his mark when he last faced Hebei in June and the lethal finisher is an excellent prospect in the anytime goalscorer markets again on Tuesday.

Top Betting Odds and Stats for Shanghai Port vs Hebei

Read our rundown of the best stats for Tuesday’s fixture below alongside a tool to help you choose the best odds.

You can read all of the latest team news and injury info for Shanghai Port vs Hebei in the Super League on Tuesday below.

Shanghai Port will be without Xu Xin, Aaron Mooy and Ablahan Haliq this week, while Oscar and Wei Zhen are still considered doubtful. Port drew 1-1 in the Shanghai derby against Shenhua in their most recent match on Wednesday.

Hebei have a clean bill of health at present and an injury free squad allowed them to break their duck for the season with a 2-1 win over Wuhan Yangtze on Thursday. Hebei are still second last however, having lost six times on the trot before that. 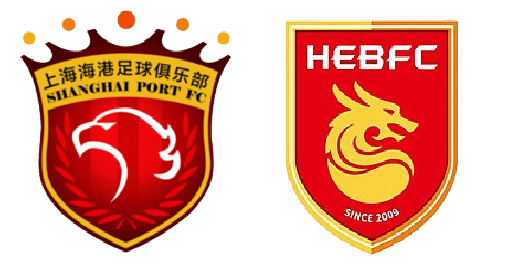 Where will Tuesday’s game be played?

The Puwan Stadium will host Shanghai Port vs Hebei on Tuesday.