One of the more interesting matches of the mid-week La Liga round is certainly the Sevilla vs Valencia duel. If you want to learn more about this, game, check our preview and free betting tips.

The best tips and predictions for Sevilla vs Valencia

You can take a look at our favourite La Liga betting tips on our website, including our predictions for the Sevilla vs Valencia duel:

The two teams enter this game being only two points apart in the standings, so this should be a very exciting duel. That being said, Sevilla beat Valencia in their last four meetings and while Valencia is in good form at the start of the new season, Sevilla is still the better team. They are also playing at home, so our prediction is for Sevilla to win this game.

Four of the last five head-to-head duels between Sevilla and Valencia have gone under 2.5 total goals and we don't see any reason why their next meeting should be any different. However, Valencia did average 2.8 goals per game so far in La Liga, but Sevilla only averaged 1.5 goals per game in their first four matches in the league. Given the fact that we expect Sevilla to dictate the tempo, betting on under in this game sounds like a smart move.

Youssef En-Nesyri to Score at Any Time

The Moroccan striker was the top scorer for Sevilla in La Liga last season with 18 goals and he is the picture of consistency since he didn't miss a single game in the league last season. En-Nesyri has started the new season in the same vein with two goals in the first four matches, so we feel it's worth betting on him to net a goal against Valencia as well.

If you wish to bet on the top Sevilla vs Valencia odds, check our list of odds from the finest UK betting sites:

Sevilla vs Valencia preview: A very close and exciting matchup

After the first four games in the new La Liga season, Sevilla has two wins and two draws. In the meantime, they also had a game with Red Bull Salzburg in their first the Champions League group stages which they drew as well. All in all, Sevilla had a pretty good start to the new season and, more importantly, the team is completely free of injuries and suspensions at the moment.

The Bats entered the new season after disappointing their fans again last season and those fans probably lost all hope that the team could get back to being one of the best teams in Spain. However, Valencia had a great start of the season with three wins and a draw before they finally lost over the weekend in a very exciting duel against Real Madrid. On the downside, Valencia has a few injured players at the moment, including Soler, Cheryshev, Gaya and Correia. 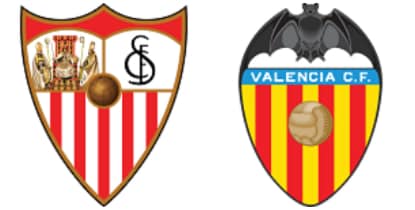