One of the more interesting matches in the upcoming La Liga round is the Sevilla vs Osasuna duel, so check our preview of this game to learn more about it.

Our top Sevilla vs Osasuna betting tips and predictions

We can offer you all La Liga betting predictions on our website, along with our free betting tips for Sevilla vs Osasuna:

With both teams in great form and separated by just two points in the standings, this should be a very exciting and close duel. And while Osasuna enters this game after snatching a point from Real Madrid in the last round, we don't think they can do it again against another favourite. So, our prediction is for Sevilla to win this game, just like they did in four of the last five h2h duels with Osasuna.

Although we've only seen two of the last five h2h duels between Sevilla and Osasuna go over 2.5 total goals, this match could be very different. First of all, both teams are playing well and we expect them both to go for the win. In addition to this, Sevilla averaged 2.40 goals per game and Osasuna 2.45 goals per game this season in La Liga, so they should be able to combine for at least three goals together.

Since we expect to see at least three goals in this match, we also expect both teams to score, despite the fact that this only happened in two of the five most recent meetings between Sevilla and Osasuna. Both teams have score in 55% of all Osasuna matches in the league so far, as well as 40% of all Sevilla games in La Liga this season.

The best odds, stats, and more for Sevilla vs Osasuna

If you are looking for the top odds and stats for the Sevilla vs Osasuna duel, check them our right here:

The new season has been great so far for Sevilla since the team is sharing the second place and they are only three points behind Real Sociedad at the top. In the last five matches in all competitions, Sevilla has two wins, two draws, and one loss, so they have been a bit inconsistent lately. Papu Gomez and Rekik are the only two players currently on the club's injury list, so that's another positive for Sevilla.

The team from Pamplona has surprised many with their performances this season since they are currently in the seventh place in the standings, two points away from the places that lead to Champions League next season. Furthermore, the team has three wins and two draws in the last five games in the league, including a draw in Madrid against Real in the last round. Hernandez, Herrera, and Ramlho are injured and they will miss the next match.

The most frequent questions for Sevilla vs Osasuna 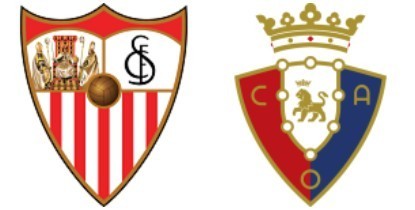