The first match of the upcoming La Liga round is the Sevilla vs Elche duel, so let's take a closer look at this game and what we can expect from it.

Our favourite betting tips and predictions for Sevilla vs Elche

If you need help to find the right bet for Sevilla vs Elche, check our top betting tips for this duel:

Sevilla to Win at Half Time and Full Time

Although Elche is in great form and they even managed to avoid defeat in Madrid against Real a few weeks ago, Sevilla really needs this win to stay close to Real Madrid in title race and we have no doubt that they will get it.

Furthermore, Sevilla beat Elche in three of their last five meetings and they've led at half time in two of those three wins, which is our prediction for this game as well.

Three of the previous five head-to-head duels between Sevilla and Valencia have gone under 2.5 total goals and we can see that happening once again on Friday.

The latest odds and important stats for Sevilla vs Elche

If you are trying to find the top Sevilla vs Elche odds, check our list of odds chosen the best UK betting websites:

While the home team is the clear favourite in this game, it can still turn out to be an interesting one. So, let's take a closer look at the teams right now:

Drawing with Osasuna in the last round has been a disappointing result for Sevilla, especially after Real Madrid won their game and increased their advantage over Sevilla to six games in the title race. Now Sevilla has a chance to get right back on track with a relatively easy win over Elche, but we all know that those easy wins are sometimes hardest to come by, especially with Elche in good form.

Sevilla will miss Gonazlo Montiel in this match due to an injury he suffered in the last game against Osasuna, while Jesus Navas is also unlikely to play in this game. Erik Lamel and Suso are still injured, but Lucas Ocampos is probably despite a slight knock.

The team that was recently in a seemingly desperate situation has turn things around and now they are unbeaten in the last five La Liga matches – including the impressive draw against Real in Madrid. Elche also made Real Madrid sweat in Copa del Rey before that, forcing them to earn their win in overtime to go to the quarter-finals, where they were eventually eliminated.

When it comes to team news, Elche has a pretty great situation right now. The only injured player is Gonzalo Verdu, who is also likely to play in this game if he can shake off a knock.

The most common questions for Sevilla vs Elche 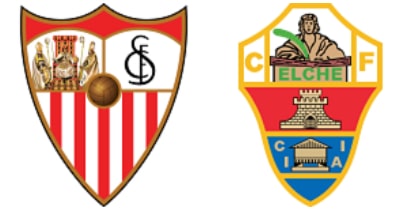