Sevilla and Barcelona meet at the Estadio Ramón Sánchez Pizjuán in La Liga on Saturday, September 3rd. Barca are chasing their third league win on the spin when they visit struggling Sevilla. Read our free predictions and find the latest odds for the fixture below in our detailed match preview.

Winless Sevilla host a rampant-looking Barcelona side in La Liga on Saturday. Can the hosts cause an upset against the title hopefuls? Read our top predictions for this weekend’s fixture below.

Sevilla haven’t started the new La Liga season at all well and their sluggish performances so far mean that they are still searching for their first win. With livewire winger Lucas Ocampos sold to Ajax during the week, Los Nervionenses look even less dynamic in the final third and they look ill-equipped to match a Barcelona side that are hitting their stride. Barca won each of their last two league assignments and hit eight goals along the way and they should have too much firepower for their hosts this weekend.

Robert Lewandowski has already looked the part in a Barcelona shirt and the prolific Pole doubled his tally for the campaign with two well-taken efforts against Real Valladolid last week. The 34-year-old should be well-serviced again on Saturday by his talented, creative supporting cast and Lewandowski is priced generously as just below evens to add to his early haul with a strike against Sevilla.

Top Betting Odds and Stats for Sevilla vs Barcelona

View our list of the top stats for Saturday’s match below alongside a tool to help you choose the best odds.

Read all of the latest injury updates and team news for Saturday’s La Liga skirmish between Sevilla and Barcelona below.

Defender Marcos Teixeira Marcao is out injured for Sevilla, as is attacker Jesus Manuel Corona. Lucas Ocampos has been sold to Ajax, though newly captured winger Adnan Januzaj could make his debut on the flank having just signed for the club on a free transfer.

Andreas Christensen has been laid low with a fever, though he should recover in time to play on Saturday. Pierre-Emerick Aubameyang is out with a broken jaw following a break-in incident at his house, though the Gabon international looks set to seal a move to Chelsea before the weekend. 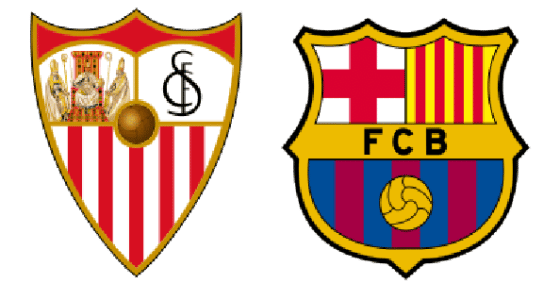 Real Madrid are the current leaders in La Liga.

Viewers in the UK can watch Sevilla vs Barcelona on Premier Sports 1 or La Liga TV.