It isn’t often a player with 26 goal involvements in a single season goes under the radar.

For example, Kai Havertz, linked with a €100million move to Bayern Munich, finished the 2018/19 season with 17 goals and three assists.

And then there's Bruno Fernandes, rumoured to be a transfer target for Liverpool, Tottenham Hotspur and both Manchester clubs, who netted 20 times and assisted a further 13 in Liga NOS last season. Sporting are believed to want in the region of €70million for the 24-year-old.

Pure goalscoring midfielders are worth their weight in gold. That’s why it’s bizarre Pablo Sarabia’s exploits for Sevilla haven’t taken him into the same realms as Fernandes and Havertz.

The versatile 27-year-old reportedly has a €19million release clause in his deal, yet clubs, strangely, aren’t queuing up to sign the Real Madrid academy graduate.

He finished the 2018/19 season with 13 goals and 13 assists, and he was directly involved in 42 per cent of the goals Sevilla scored in LaLiga.

In his prime years, Sarabia should be a top target for ambitious Premier League clubs – not only those looking to crack the top six but teams already in it.

Not only does he have a track record – he’s been involved in 66 goals in the last four LaLiga seasons – he also has experience in the Champions League and Europa League.

He's a potential difference-maker and a regular game-changer. During the 2018/19 campaign, Sarabia was used in several roles for Sevilla but was primarily deployed on the right side of the pitch, either as part of a midfield three or as a member of the attack. 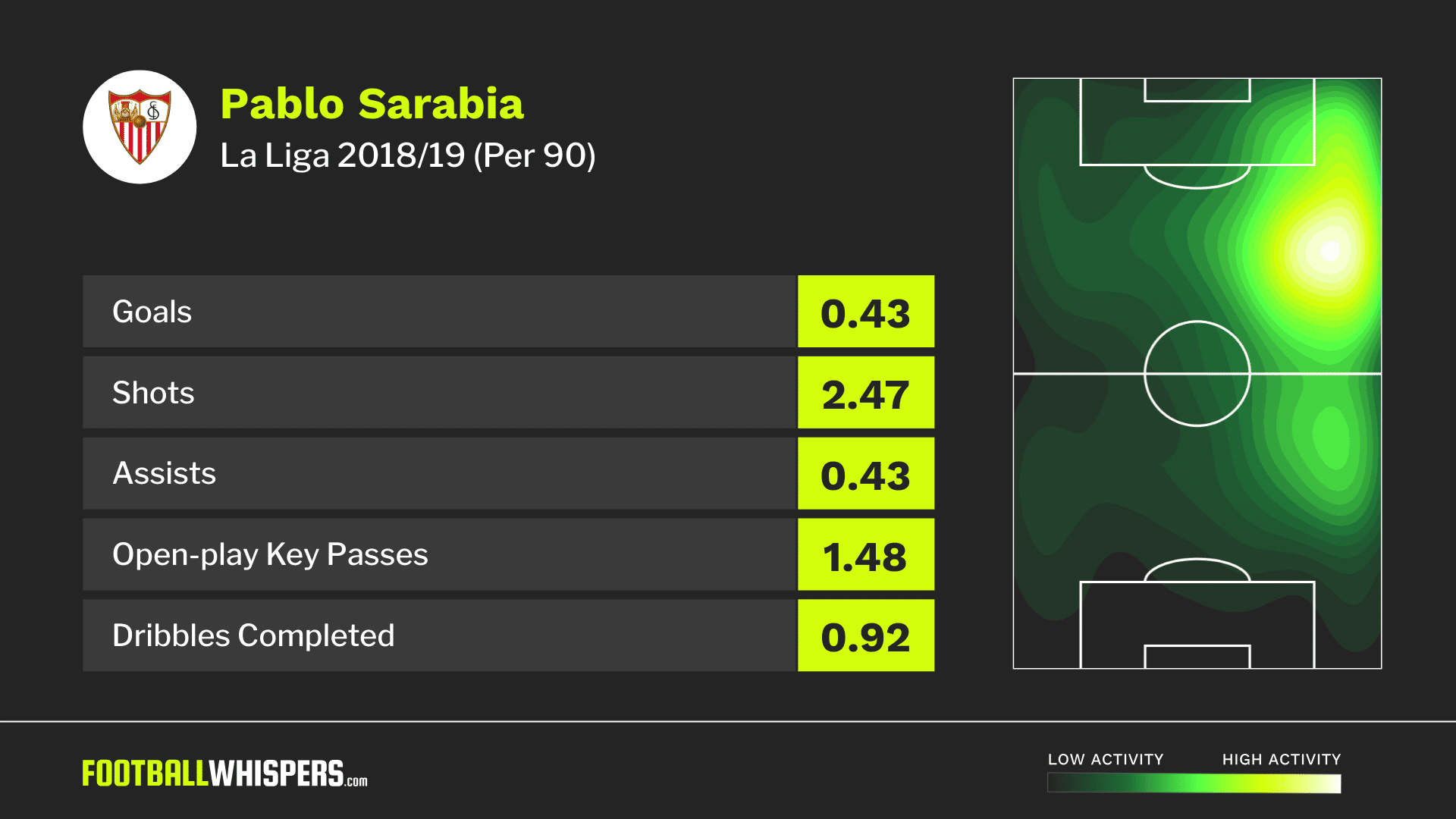 And unlike most modern-day players who like to drift into central zones, Sarabia gravitates to the right side of the pitch, as evidenced by his heat map (above). He is comfortable operating in wide areas.

He's not an elite dribbler, averaging 2.47 per 90 and completing 0.92 of those, but Sarabia's real value is what he does off the ball.

He regularly drifts into dangerous areas, finding pockets of space, and this is where he does the most damage. All he needs when wide is half a yard to float a cross into the penalty area – usually a left-footed inswinger – and, because he's unnervingly precise, these balls into the box need a slight touch to turn into goals.

No player in LaLiga managed more assists than Sarabia last term and only Lionel Messi could match his tally of 13.

But perhaps the most striking part of the Sevilla man's game is how two-footed he is. The majority of his assists come from his left while most of his goals are right-footed efforts. He's unpredictable and it makes him difficult to defend against.

What makes him such a dangerous player is how sustainable his output is. He's a reliable threat and has been for a number of years now. But his return of 13 assists during the 2018/19 campaign was his most prolific to date. Sarabia's expected goals (xG) total backs up the return. His xG for the season was 11.1 with an average of 0.35 per 90. 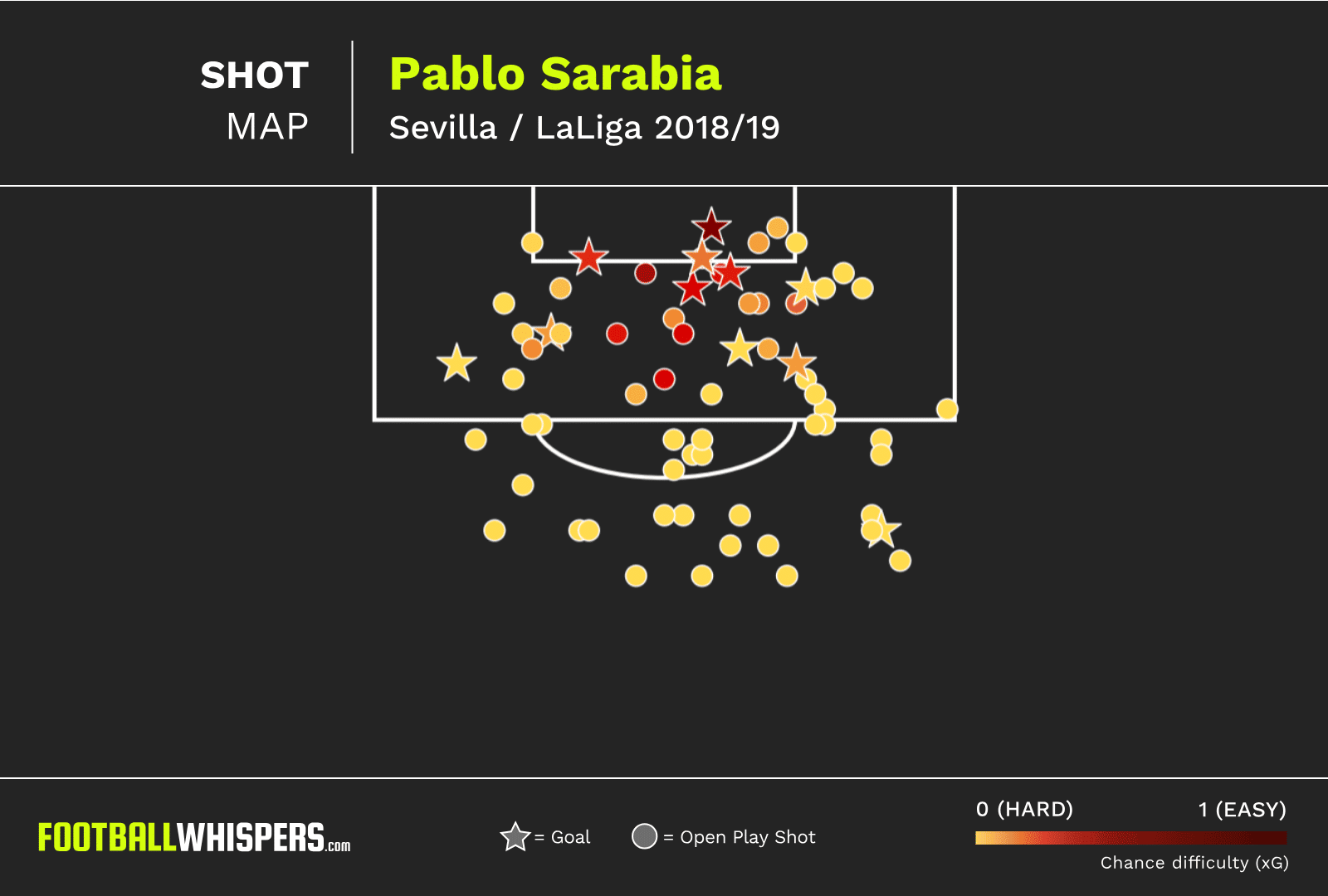 When you cast an eye over his shot map (above) it's clear why he's such a reliable goal threat. He takes very few shots from outside the area, a trait which highlights his intelligence. While he scores some difficult chances, those more of an orange colour, he does have a fair amount of shots which fall into the easy category.

They're only easy, however, because Sarabia manages to position himself in such areas with great regularity. A number of his goals last season could be classed as tap-ins but the skill involved to get into such areas is one very few have.

To be blunt about it; goals win you games. Having reliable goalscorers in your team increases the chances of you picking up all three points. The 27-year-old is just that.

While LaLiga attackers have struggled to adapt to the Premier League in the past, those have been reliant on pace for the most part. Sarabia's game is based on intelligent movement and taking up clever positions. A transferable skillset.

A number of clubs could do with a player like him. With a release clause of just €19million he wouldn't even be considered a risk for most clubs in the Premier League.