Round 24 of Serie A fixtures isn’t quite over yet, as AC Milan travel to face Lazio tonight. However, there have already been some good games and brilliant goals in the round. Here, we cover the latest action from Italy’s top flight.

Juventus maintained their seven-point lead at the top of Serie A with a 2-0 victory over Cagliari at the Stadio Sant’Elia on Sunday evening. However, the champions did have to work for the points, with the Sardinian side setting a fast pace in the early going.

Gonzalo Higuain broke the deadlock on 36 minutes with an outstanding piece of predatory attacking. The Argentine beat the home side’s offside trap to latch onto a through-ball by Claudio Marchisio before beautifully steering home from a difficult angle even as Cagliari goalkeeper Rafael rushed out. 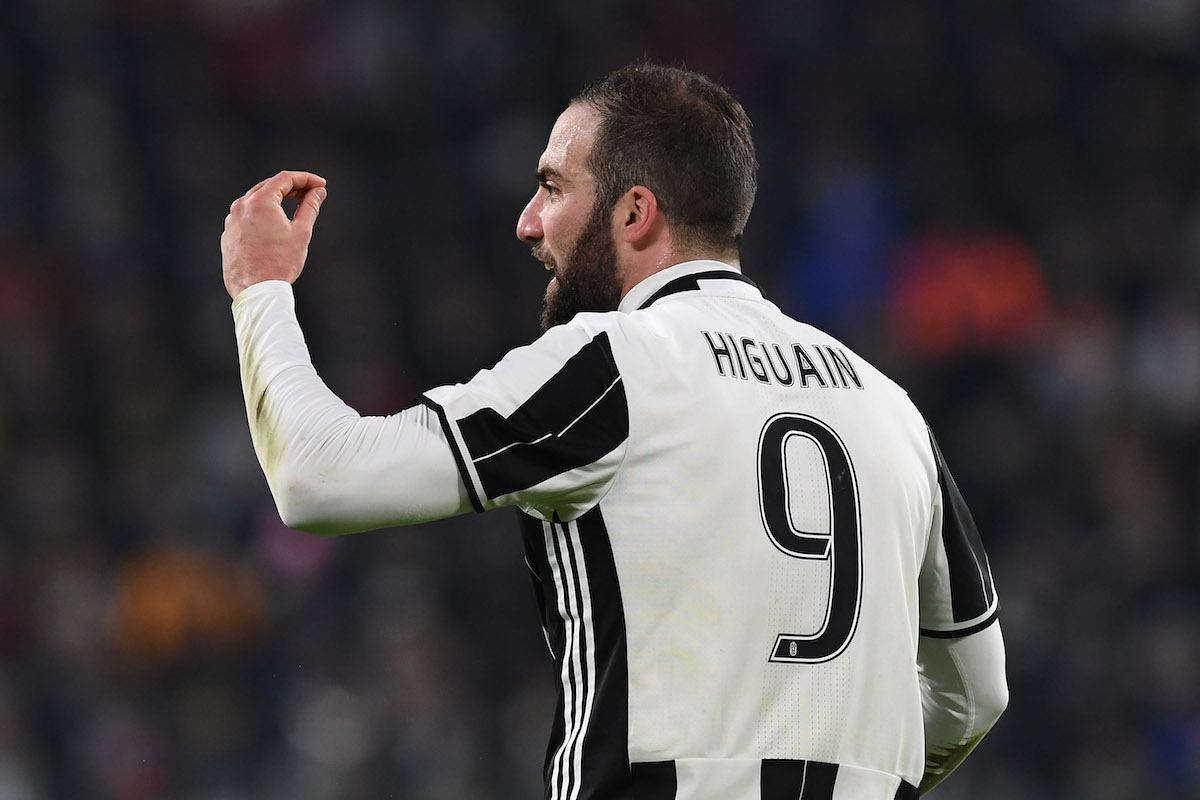 Higuain doubled the lead just after the break following a typically sharp Juventus counter-attack. The Bianconeri turned a Cagliari corner into a scoring opportunity of their own with a fast, incisive breakaway and Paulo Dybala played his compatriot Higuain through to double the lead.

Since switching to a 4-2-3-1 formation, Juventus have now won six consecutive games in all competitions. In the process the mastermind behind those tactics – head coach Massimiliano Allegri – secured his 100th victory since taking charge in 2014.

With a hugely important trip to the Santiago Bernabeu Stadium coming up on Wednesday, it would have been easy for Napoli to take their eyes off the domestic prize—namely a top three place. But, with a squad depth they simply didn’t have last season combined with a real desire to keep up their good form, they staved off complacency and underperformance to beat Genoa last Friday night.

Maurizio Sarri refused to talk about Real Madrid until his side had won this match, but in the first half it looked like his side were going to be frustrated. Genoa defended well, pressured their hosts and occasionally threatened themselves—Giovanni Simeone – son of Diego – saw a good effort go just over the crossbar. 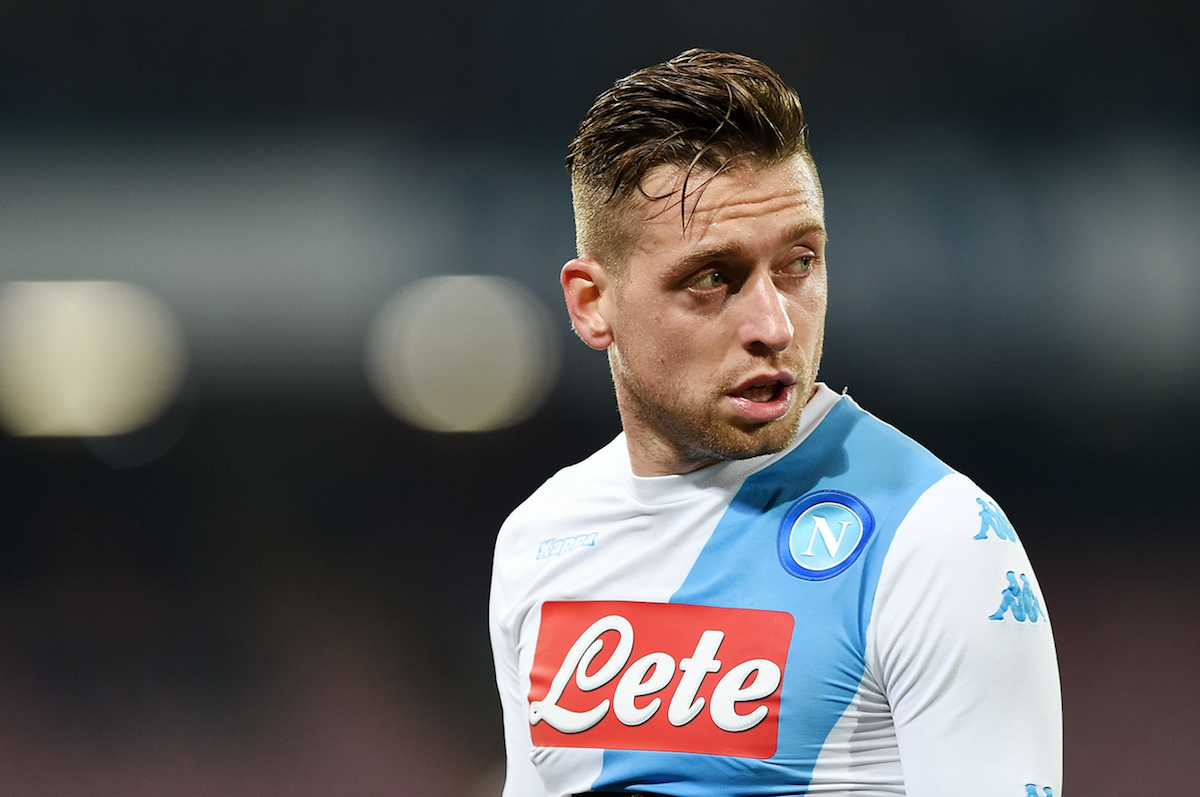 However, in the second half Napoli increased the tempo of their passing and opened up their opposition. Polish midfielder Piotr Zielinski hammered home to make it 1-0 before Emanuele Giaccherini scored his first goal for the club. The former Sunderland winger tapped home into an unguarded net after excellent work down the left by the relentless Dries Mertens.

With three points essentially in the bag, Sarri introduced new signing Leonardo Pavoletti from the bench to play against his old club, but the striker was unable to add to the 2-0 lead. 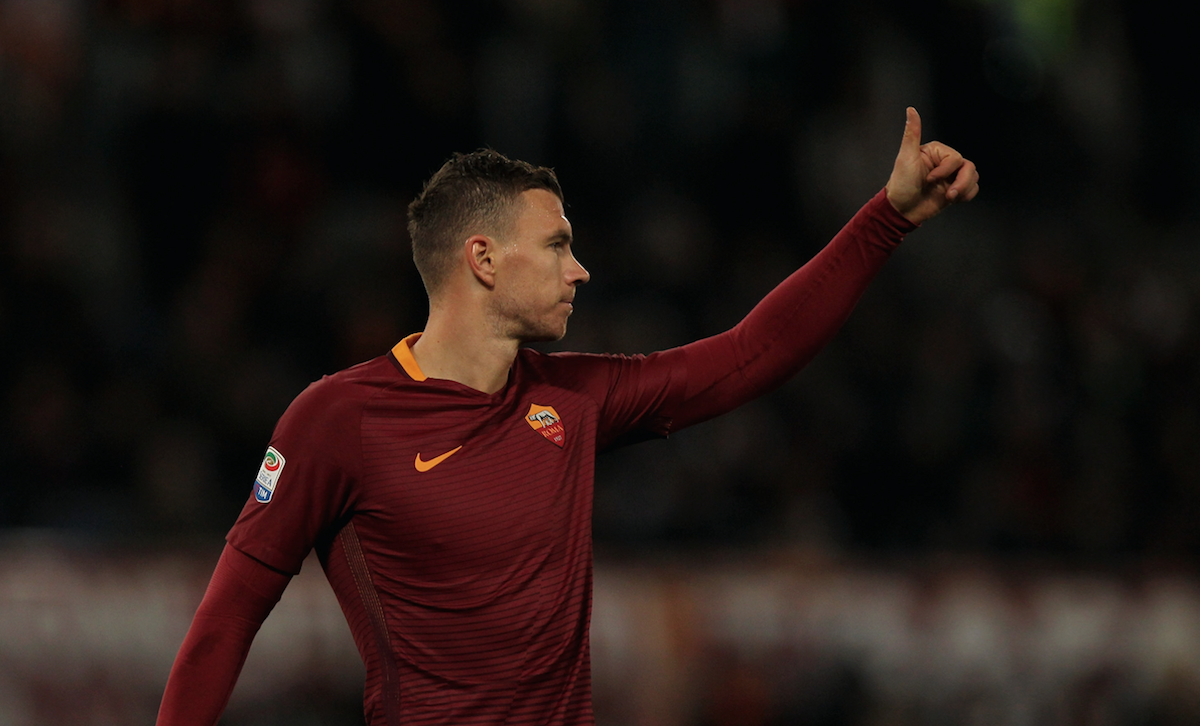 Radja Nainggolan scored a well worked goal to open the scoring for Roma against Crotone on Sunday, but only after Edin Dzeko had missed a penalty. The Bosnian striker screwed his spot-kick wide after 15 minutes, though he eventually atoned for the miss with a 77th-minute tap-in from a Mohamed Salah cross.

That strike meant Dzeko remains joint top scorer in Serie A with Higuain on 18 goals, while Roma kept a firm grip on second place.

After a dull first half of few real scoring chances for either side, Fiorentina took the lead on 41 minutes courtesy of an accurate Borja Valero finish. And, with that strike alleviating some of the pressure that came following a 4-0 defeat to Roma last week, the Viola gradually opened up Udinese in the second period.

A rare Khouma Babacar goal was followed up by a calmly struck Federico Bernardeschi penalty as Fiorentina got back to winning ways in impressive fashion. 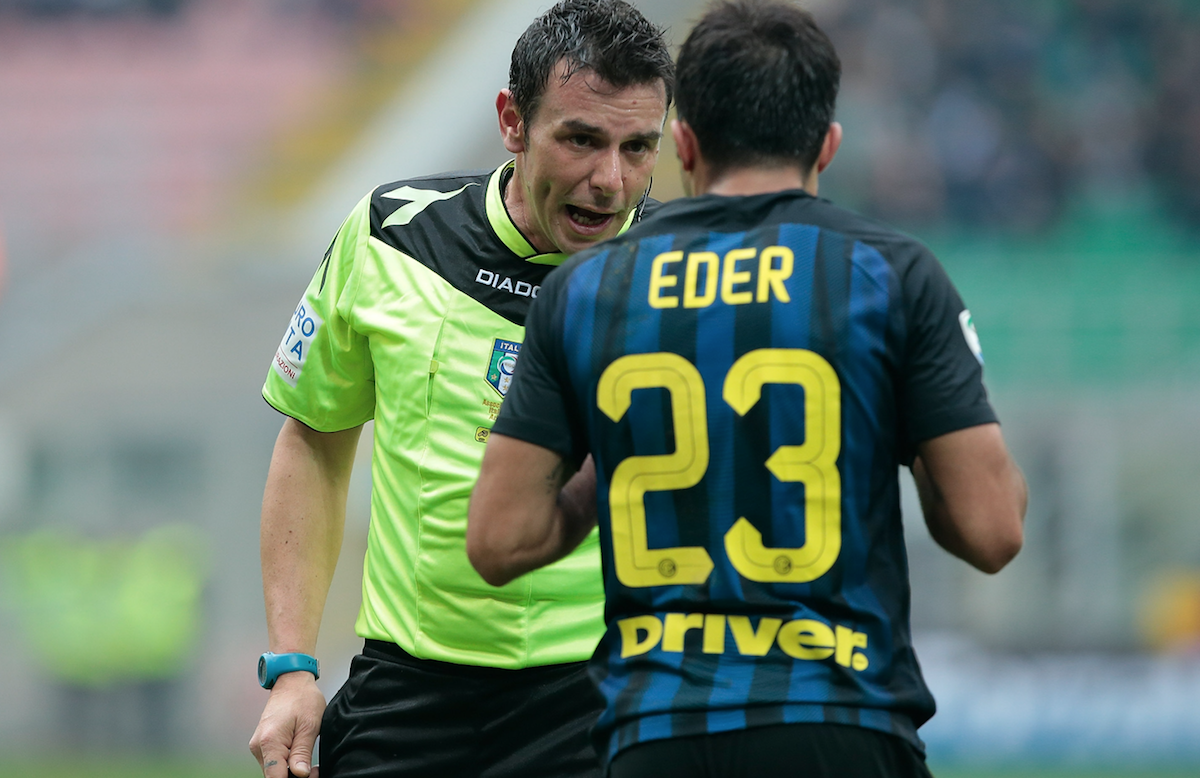 Inter recovered from a week of intense mudslinging with Juventus to record a win over relegation-threatened Empoli at the San Siro. Stefano Pioli’s side took the lead as Eder chested home into an open goal, and the Brazil-born Italy forward was instrumental again to tee up Antonio Candreva for the Nerazzurri’s second with an exceptional curled cross with the outside of his right boot.

Atalanta’s incredible rise showed no sign of stopping as they took apart lowly Palermo at the Stadio Renzo Barbera on Sunday afternoon. La Dea threatened consistently before taking the lead on 19 minutes through an Andrea Conti header.

They then extended their lead with an Alejandro Gomez strike before Palermo’s Ivaylo Chochev pulled one back. Victory was eventually confirmed on 78 minutes for Atalanta as new signing Bryan Cristante stooped low to head home from close range.

Bologna arrived at the Stadio Luigi Ferraris in terrible form, with a 7-1 defeat to Napoli and a late 1-0 loss against a nine-man Milan, both of which occurred at home, delivering successive blows to their collective morale.

This didn’t show early on against Sampdoria, however, as Blerim Dzemaili fired them into the lead on 18 minutes with a powerful strike. But, just as it looked like Roberto Donadoni’s side could gain a crucial win, they unravelled. A controversial penalty call led to an equaliser from the spot by Luis Muriel on 82 minutes.

Patrick Shick then put Sampdoria into the lead on 83 minutes. And, on 88 minutes, an Ibrahima Mbaye own goal sealed a third straight defeat to Bologna.

Roberto Inglese bagged his first ever Serie A hat-trick as Chievo defeated Sassuolo 3-1, but the striker began the day with a missed penalty. Alessandro Matri gave the home side the lead, but Inglese cancelled it out before half-time with a header from a corner. He then tapped in a second on 56 minutes and a third on 67 minutes to stretch Chievo’s unbeaten league record to three games. 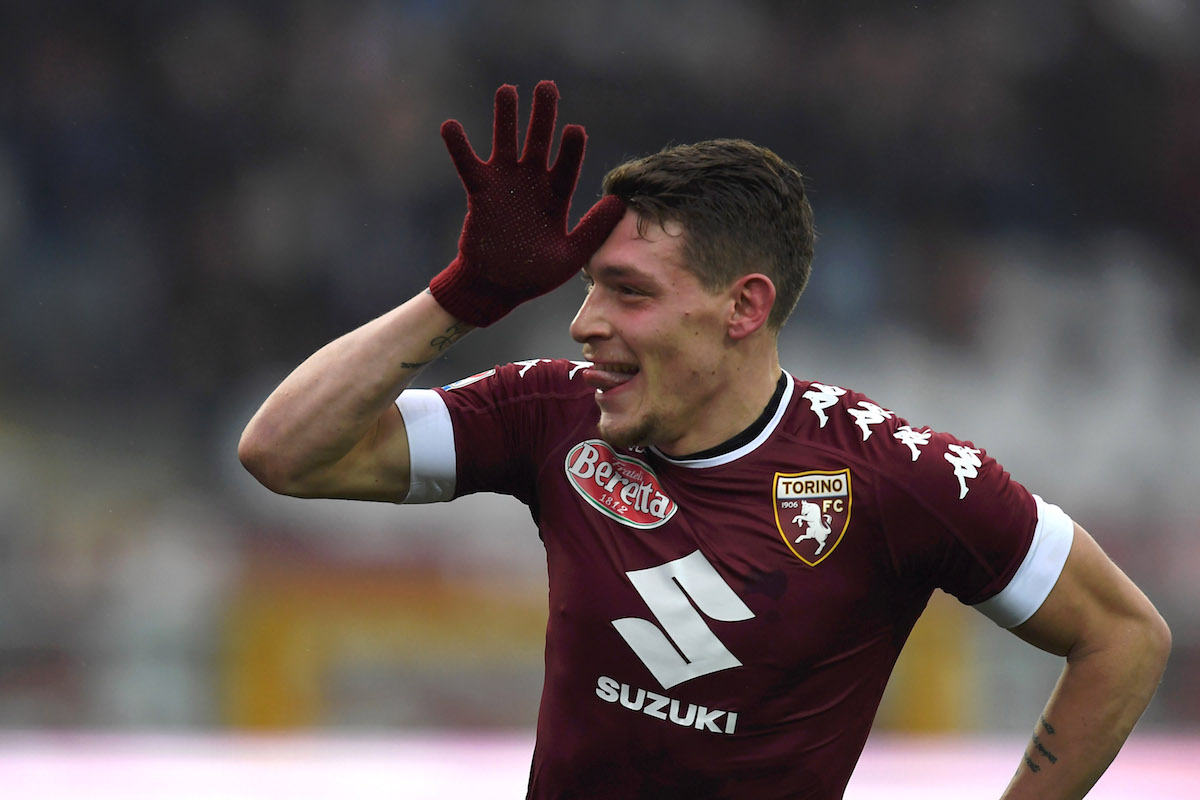 Torino’s victory over Pescara showed the best and the worst of both teams. Both the former’s firepower and the latter’s inability to defend was on show as Torino blazed their way into a 3-0 lead within 15 minutes.

However, Pescara showed their pluckiness to come back from what had become a 5-0 deficit in the second half, pulling the score back to 5-3. They were helped in this endeavour by the tactics of Sinisa Mihajlovic, which continue to ensure Torino are infused with a certain vulnerability at all times.

Either way, Andrea Belotti was happy—the openness of the game suited the striker, who took his tally to 17 goals in 21 league appearances this term.