“The number ten is like a Ferrari, not everyone knows how to drive it.” Antonio Di Natale noted in a recent interview, the former Udinese Captain discussing whether or not Paulo Dybala should switch from his current 21 to take the iconic shirt at Juventus. To do so would be to follow in the footsteps of some truly iconic players, to continue a legacy that encapsulates everything magical about Italian football.

While there is no doubt Alessandro Del Piero made the fabled number his own after wearing it for almost two decades, for many Serie A fans it resonates just as strongly when seen during clips of his immediate predecessor. So many Juventini began watching the club when Roberto Baggio was the star and instantly recognise the sight of him wheeling away in celebration of his latest feat; arms aloft, the black and white stripes of his long-sleeved shirt interrupted only by his brightly coloured captain’s armband, his trademark ponytail bouncing around his neck.

For five seasons he led the Bianconeri with style and panache, usually deployed behind the strikers in his natural trequartista role. Yet he did so much more than supply chances for the likes of Gianluca Vialli and Fabrizio Ravanelli, he tormented would-be defenders himself, deceiving them with a vast assortment of body feints, changes of direction or pace and some truly breathtaking individual runs that left jaws dropped and mouths agape.

They also witnessed a player collecting individual and team honours in equal measure. From joining Juventus in 1990 to his departure in 1995, Baggio helped the Old Lady triumph in the Coppa Italia and the UEFA Cup before ending a nine-year wait for the Serie A title in his final campaign. He was named the FIFA World Player of the Year and won the Ballon d'Or 1993, the footballing world recognising the sheer brilliance of the man as he continually delivered for the Bianconeri. 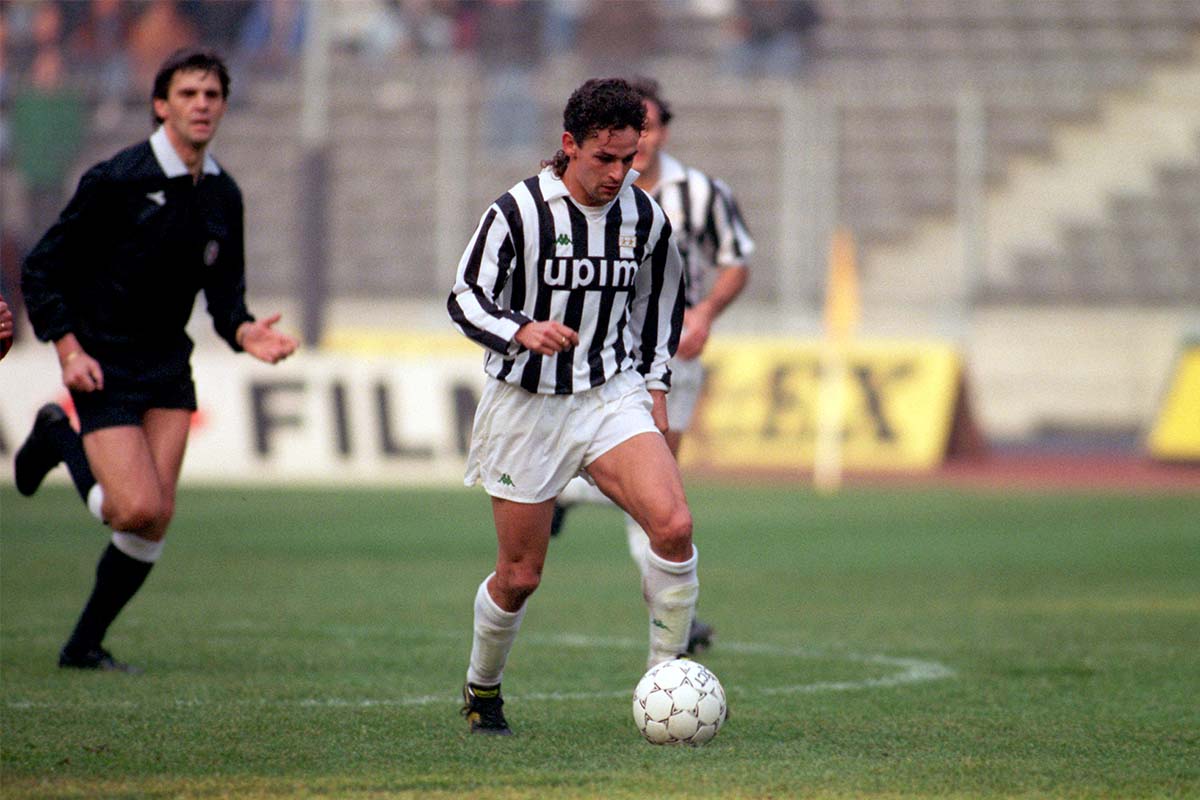 Yet would leave for AC Milan just two years later, quickly moving on for spells with Bologna and Inter, and in truth Il Divin Codino – “The Divine Ponytail” – enjoyed his best moments at either end of his incredible career. Baggio first came to prominence with Vicenza, where his performances earned him a move to Fiorentina in the summer of 1985.

Yet before he could join the Tuscan club, he ruptured the cruciate ligament in his right knee and the talented 18 year old was told by doctors he would never play again. However, the Viola honoured their agreement and sent him to France for pioneering surgery that, while leaving the youngster in complete agony, eventually saw him return to action after a two-year rehabilitation.

Baggio finally took to the pitch at the Stadio Artemio Franchi wearing that distinctive purple shirt and the supporters fell in love as he dancing past defenders before despatching unstoppable shots towards goal with increasingly regularity. He could finish from almost anywhere on the field in spectacular fashion; powerful volleys, delicate chips, perfectly executed curling free kicks and penalties, he scored them all as if born to do so.

Fiorentina would lose the 1990 UEFA Cup Final to bitter rivals Juventus, supporters then forced to watch as their star player was sold to the Bianconeri in a world record £8 million move that sparked riots on the streets of Florence. For those fans, this was not about money, but when the two clubs next went head to head, they would learn that Baggio shared their feelings.

Playing away from home, Juve were awarded a penalty which their new signing refused to take. Substituted by Coach Giovanni Trapattoni almost immediately, Baggio was showered with adulation by fans on the Curva Fiesole and chose the best possible way to reciprocate their love. Bending down, he picked up a Fiorentina scarf thrown to him by a supporter and pulled it around his neck, much to the delight of those in attendance and they have never forgotten his gesture. 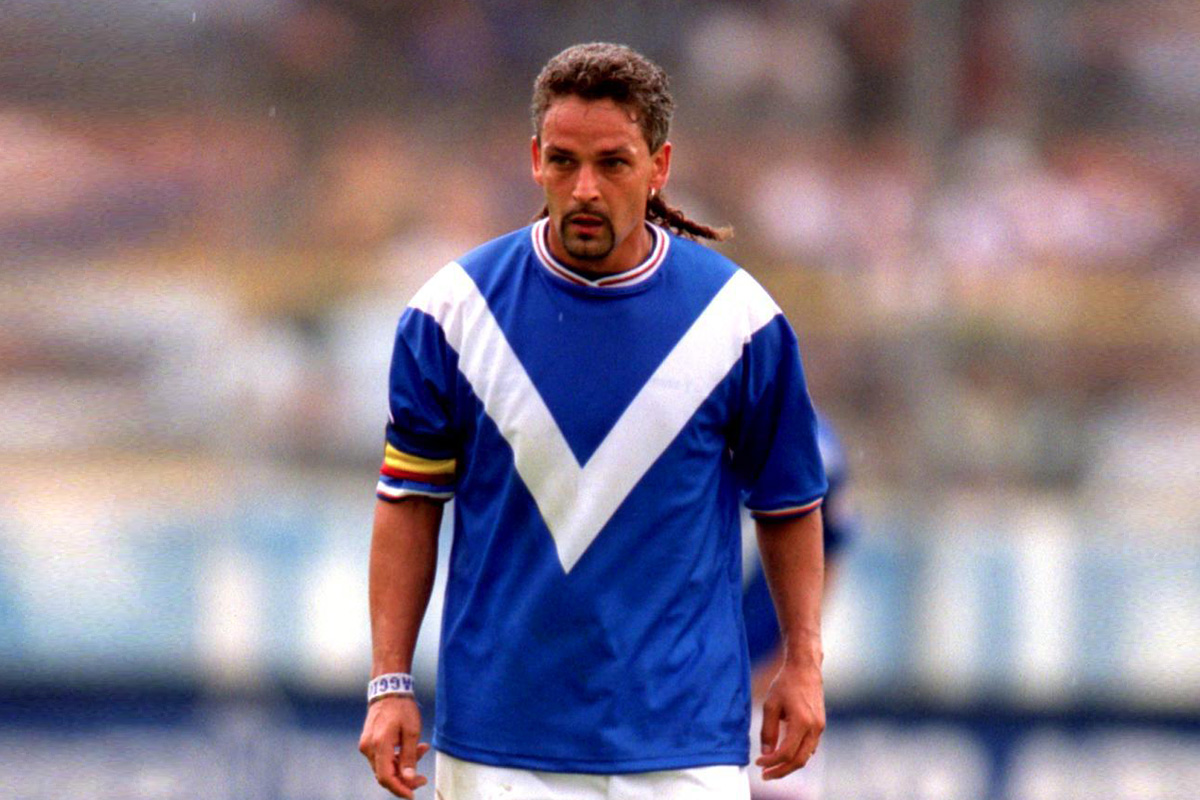 Years later, after those spells in Turin and Milan, Baggio would find himself at Brescia, where once again he found a small club willing to embrace him fully. He helped them retain their Serie A status while recording some truly famous wins and played a crucial role in developing promising young team-mates Luca Toni and Andrea Pirlo.

Del Piero and Francesco Totti – this latter discussed at length in this previous column – would continue to ensure the No.10 remained a shirt of legends, but when Baggio was at his best the league was filled with similar players.

Roberto Mancini, helped steer Sampdoria to an unlikely Scudetto in 1992, while Maradona’s exploits at Napoli need little introduction. Romanian star Gheorghe Hagi spent two seasons with Brescia, Gianfranco Zola emerged from El Diego’s shadow at the San Paolo to thrive at Parma as only Arrigo Sacchi and AC Milan eschewed the role with their switch to 4-4-2.

But if, as Di Natale would have it, the number 10 truly was a high-performance sports car, then Baggio was Ayrton Senna. Not only did he know how to drive it, but he did it with more style and grace than anyone else, delighting crowds across the peninsula with his incredible feats and always leaving them wanting more.