The Serie A table remained largely unchanged after the weekend, with all of the top seven sides winning to maintain their positions. Juventus remain on course for a sixth successive title, while Roma and Napoli continued to push on for a top three finish. However, the relegation battle was opened up ever so slightly by Pescara’s second win of the season. 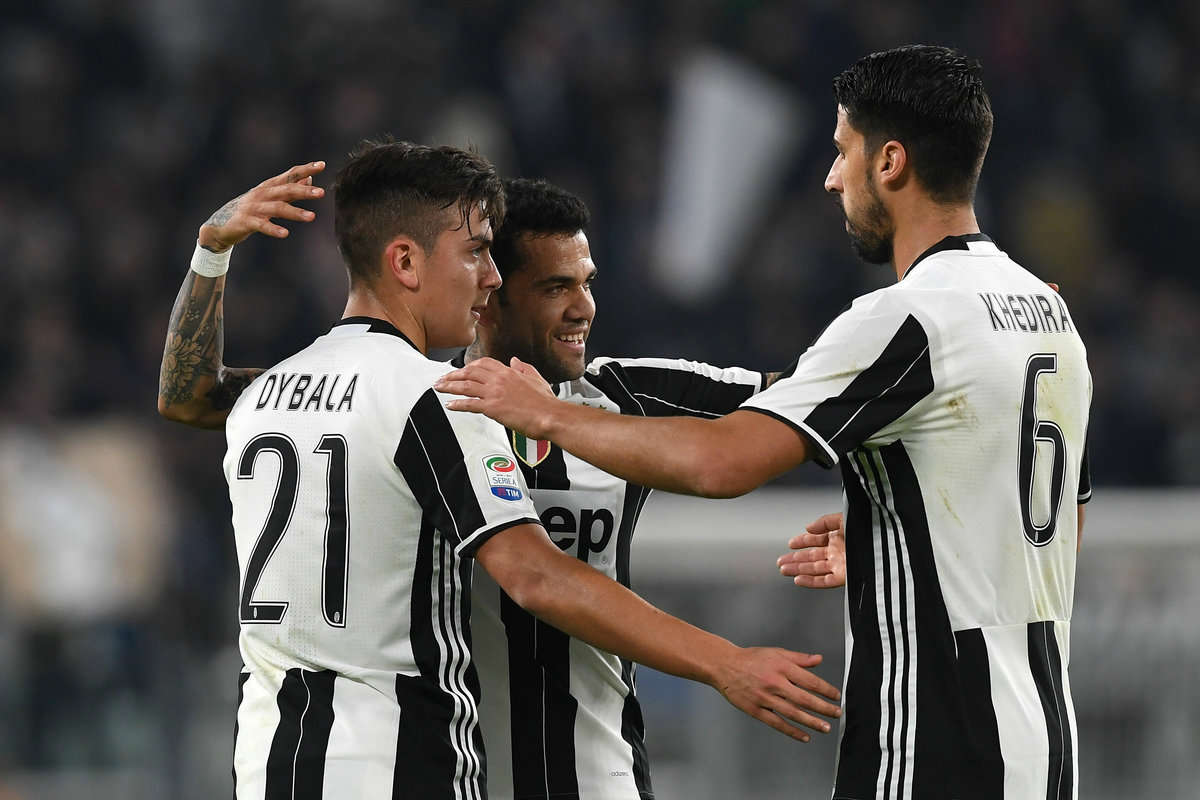 Juventus prepared for their Champions League round of 16 clash with Porto by breezing past relegation-threatened Palermo at home last Friday night. In a match they were widely expected to win comfortably, the champions did their job with a minimum of fuss, taking control early in the game and refusing to let go.

Paulo Dybala — part of a slightly altered front three of him, Gonzalo Higuaín and Croatian trickster Marko Pjaca — hit the post from a free kick just five minutes into the game. However, eight minutes later his near miss was all but forgotten as some terrible defending by the away side allowed Higuaín in from a free-kick. The Argentine centre forward failed to beat Josip Posavec but the goalkeeper could only parry the ball into Claudio Marchisio’s path, and the lifelong Juventino found the net with ease.

Diego Lopez’s Palermo side did threaten on occasion. One such moment came on 17 minutes when, despite the ball running away from him and at a tight angle, Ilija Nesterovski managed to force a strong save from Gianluigi Buffon with a sliding shot. Leonardo Bonucci, making his 300th appearance for the club, was on hand to clear the danger.

Juventus quickly resumed control after that, however. And, before half-time they were 2-0 up thanks to a stunning, curled Dybala free kick. From that moment on it was no longer a case of if Juve would win, but by how much, in pursuit of their sixth consecutive victory.

Massimiliano Allegri’s team didn’t let up in the second half, with Dybala continuing to cause problems with his movement between the lines. ‘La Joya’ found space and time just past the hour mark to slide a pass through to Higuaín, putting his compatriot one on one with Posavec once again. This time Higuaín made no mistake, lifting the ball beautifully over the ‘keeper and into the net for his 19th league goal of the campaign.

At 3-0, the match was essentially over as a contest, but an insatiable Juventus added a fourth late on. Higuaín repaid the favour by setting up Dybala for a second goal against his former club with a clever back-heel. Palermo got on the scoresheet themselves with an Ivaylo Chochev header from a corner, but it was far too little too late.

In his post-match interview, Allegri spoke of the importance of the win. “It was a league match with three points which are just as valuable as the ones against Inter,” he told Mediaset Premium. “It’s one game less to winning the Scudetto and I congratulate the lads for the way they approached the game.” 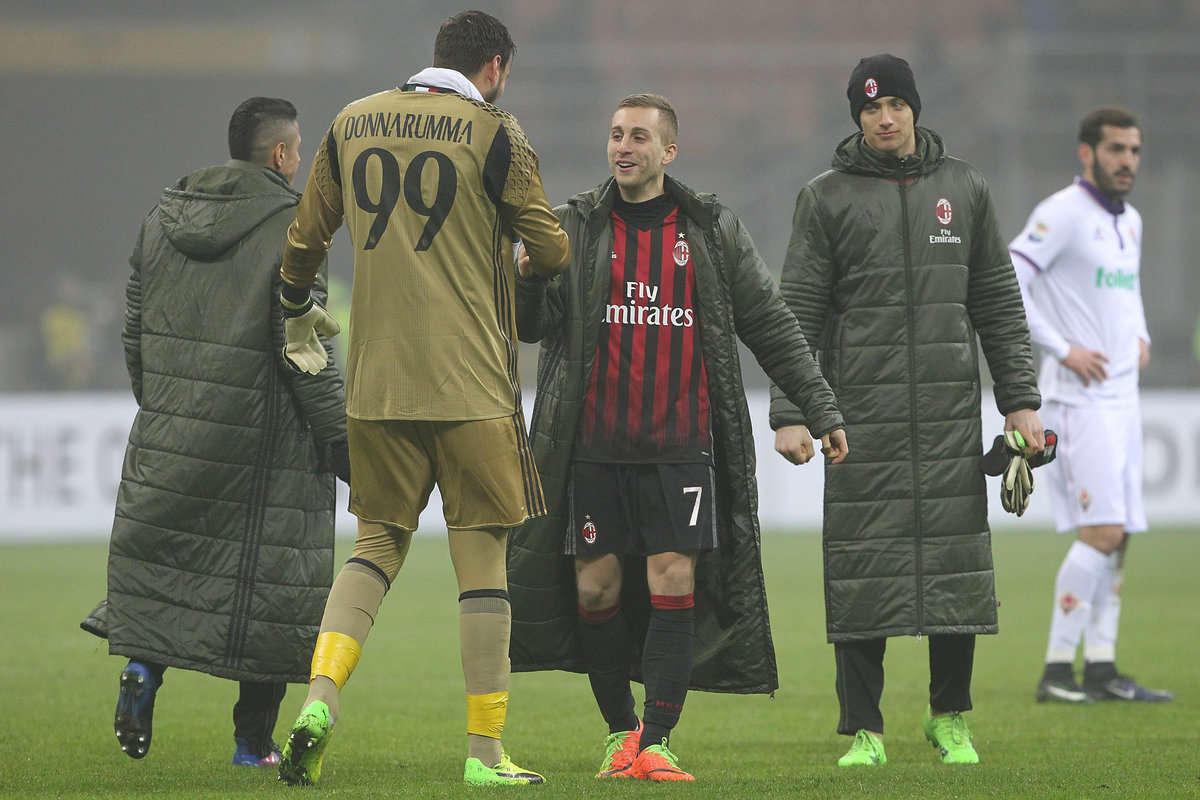 Vincenzo Montella came up against his old side at the weekend as Milan welcomed Fiorentina to the San Siro.

And, ultimately, he got the better of his former employers in what was a crucial match in the race for a Europa League place. Fiorentina dominated the ball with 62 per cent of possession, but fell behind through some weak defending from a Milan free kick. Juraj Kucka benefitted, stooping low to head home. Nikola Kalinić equalised after an intelligent run behind the Rossoneri’s defence, but Gerard Deulofeu, on loan from Everton, sealed the win for Montella’s men with a superbly struck finish from outside the box. 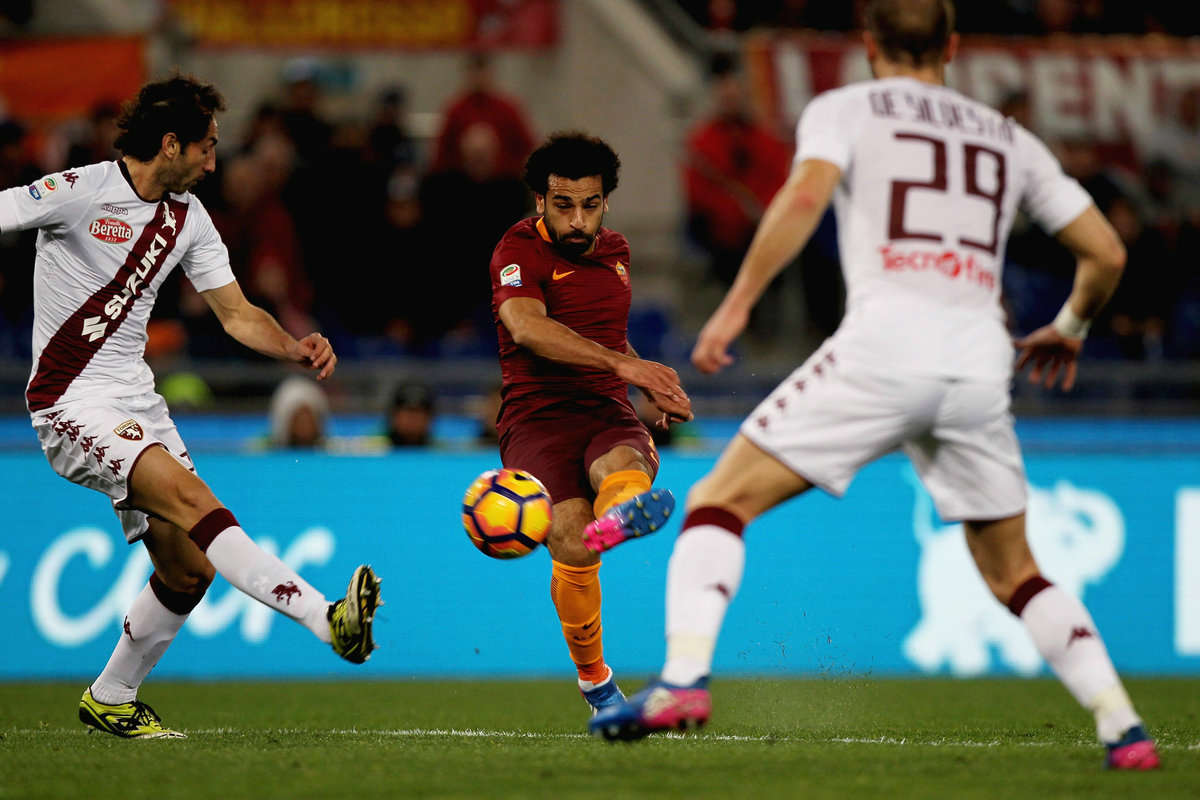 Edin Dzeko continued his outstanding run of form, scoring in his eighth consecutive match to give Roma the lead against Torino on Sunday evening.

The Bosnian has hit 11 goals in that sequence, making him Serie A’s joint top scorer with Higuaín—both are on 19 for the campaign. As was to be expected against Torino, more goals came through a Mohamed Salah volley, a thunderbolt from Leandro Paredes and a well-placed Radja Nainggolan finish. Maxi Lopez ensured the away side also got on the scoresheet. 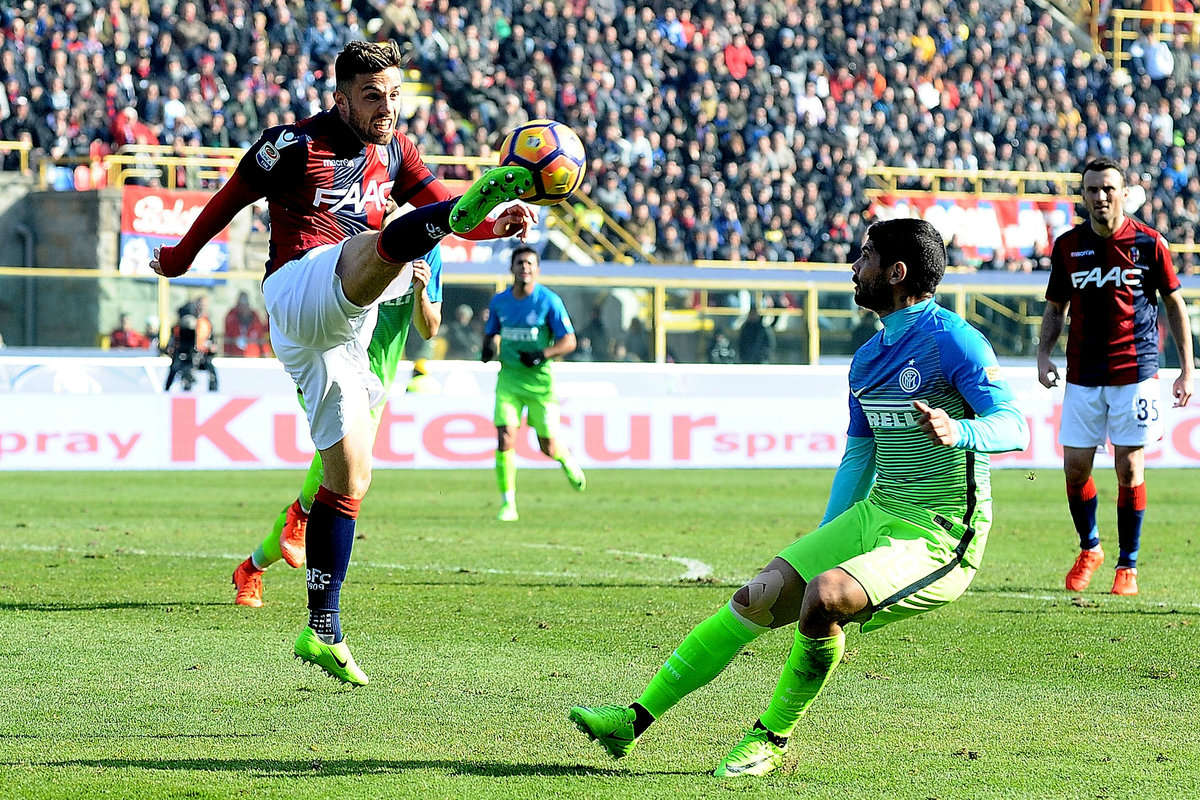 Inter continued their recovery from defeat to Juventus by winning away to Bologna in a closely fought contest on Sunday morning.

Stefano Pioli’s side, set up in a rough 4-4-2, were difficult to break down but, without Mauro Icardi up front, lacked the same goal threat. The winner eventually came after a concerted period of pressure, with substitute Gabriel Barbosa tapping into an empty net to seal the win. 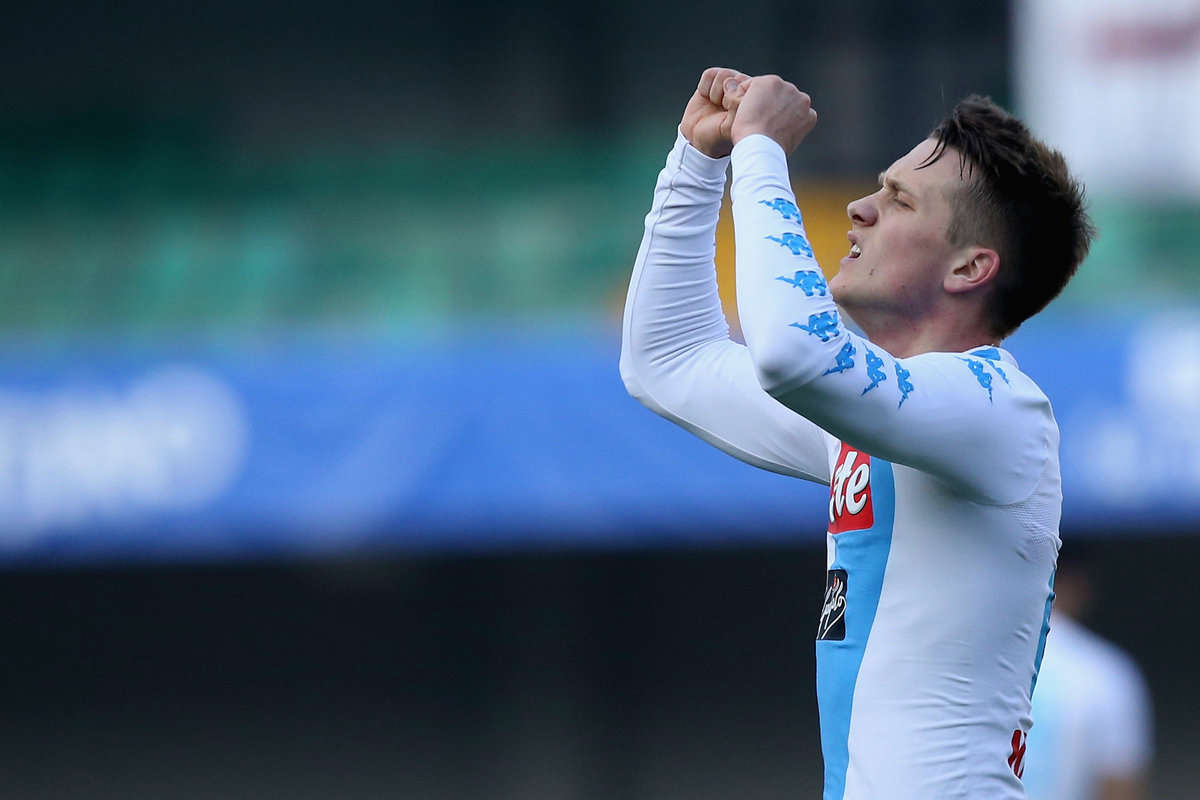 Napoli bounced back from their 3-1 defeat away to Real Madrid in the first leg of their Champions League second round tie with win by the same scoreline away to Chievo.

Maurizio Sarri rested some key players, including Dries Mertens, but his side were still too strong for their hosts. A curled strike from Lorenzo Insigne was followed up by a Marek Hamšík tap-in and a deflected Piotr Zieliński drive as Napoli went 3-0 up. Riccardo Meggiorini led a fightback late on with a calm finish, but Chievo couldn’t add to their one goal.

Pescara’s strange season got stranger on Sunday afternoon. Having started the season brightly with a 2-2 draw at home to Napoli that featured some stunning football, the Delfini failed to win one single match on the pitch in their opening 24 league fixtures.

Their only victory, over Sassuolo, was awarded to them due to an illegal signing made by their opposition. However, with cult hero Zdeněk Zeman back in charge as head coach following Massimo Oddo’s dismissal, they thrashed Genoa 5-0 thanks to some wonderful attacking interplay and strikes from Gianluca Caprari (twice), Ahmad Benali and Alberto Cerri, as well as an own goal by Lucas Orban. While still rooted to the bottom of the table, there may yet be hope for Pescara.

Gian Piero Gasperini’s Atalanta continue to thrill Serie A. La Dea won 1-0 at home to lowly Crotone thanks to an Andrea Conti goal to retain their fifth-place position as they look to secure a place in continental competition next season. 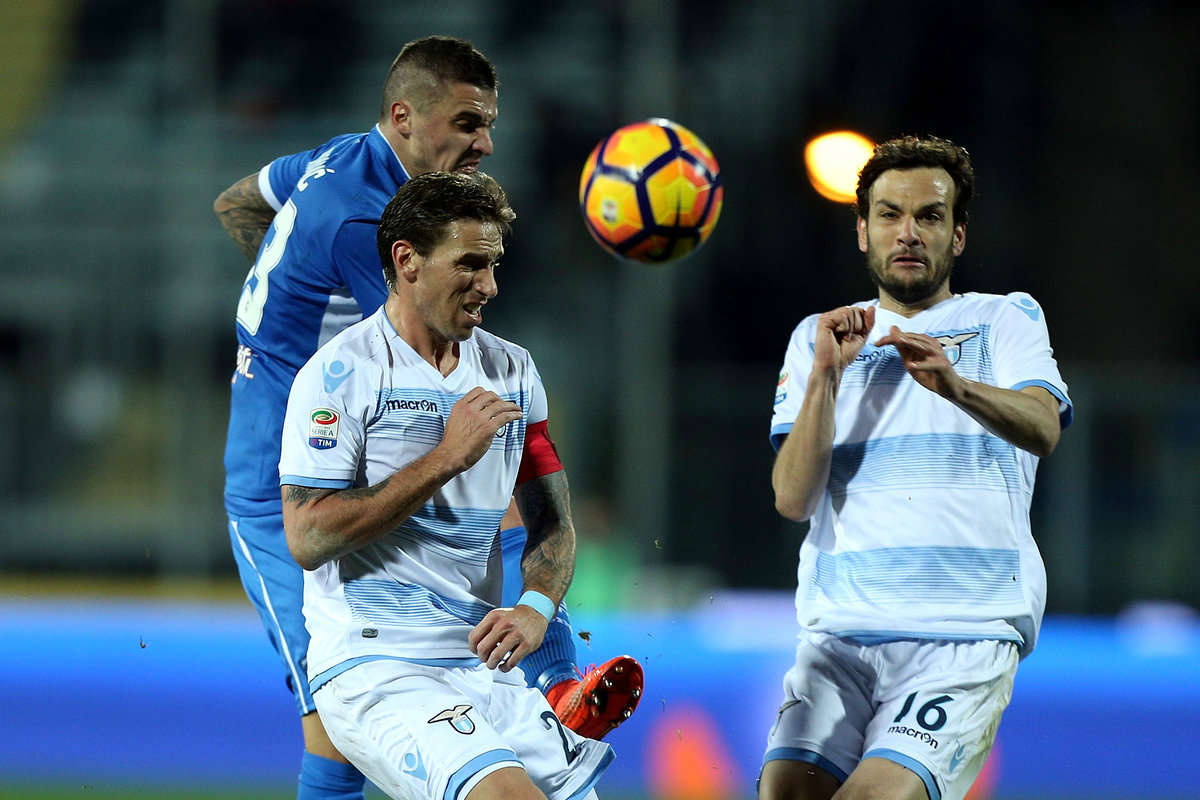 Lazio were disappointed that they could only draw 1-1 with Milan at home the weekend before last, but they made up for it with three crucial points against Empoli.

Rade Krunić put the Tuscan side ahead with a fine effort on 67 minutes, but Lazio equalised immediately through Ciro Immobile. And, with 10 minutes of normal time remaining, Keita Baldé Diao found the winner for Simone Inzaghi’s side.

A double from Grégoire Defrel allowed Sassuolo to stretch their run of consecutive away wins to three against Udinese. Seko Fofana put the home side ahead on seven minutes, but Defrel, back from a spell out through injury, would win the game. The French striker scored with only his second touch to equalise before securing victory for Sassuolo with an exceptionally accurate strike from outside the penalty area.

Sampdoria were unable to extend their run of league wins for four in a row on Sunday, dropping two points at home to Cagliari. Mauricio Isla hit his first Serie A goal for five years to give the away side the lead on six minutes, though Samp eventually found an equaliser through Fabio Quagliarella after some strong running by Luis Muriel.

CHECK OUT WHO WE THINK CAN CHALLENGE JUVENTUS' DOMESTIC DOMINANCE