If you followed the summer transfer window, you would have been surprised to see Nice midfielder Jean Michaël Seri remain in the south of France going into the new campaign.

The Ivorian himself was perhaps the most bamboozled of us all. A deal to Barcelona was close, the Catalan giants ready to spend €40million on the midfielder.

“I feel very bad. I'm not going to lie to you, I'm really hurt,” he told Mundo Deportivo. “For me, football has always been a party, a source of joy.

After helping the club beat Ajax 2-2 on aggregate to reach the Champions League play-off, it was expected Les Aiglons would honour his commitment and allow him to leave for Spain.

The window closed, no agreement was reached and Seri, who had been excellent during the early part of the season was left dumbfounded.

“I didn't play with Nice this weekend because I didn't have my head on football. My dream to go to Barca has been broken, and that for me is terrible.

“The conversations between the two clubs went from bad to worse. As far as I can tell, I've not left Nice due to financial reasons.”

Now that January is upon us, Premier League clubs are looking towards the Allianz Rivera. Chelsea and Manchester City are rivalling Paris Saint-Germain . for his signature, according to The Sun. But The Guardian claim Manchester United could crash the party too, as they did with Alexis Sánchez.

Who is Jean Michael Seri?

Nice signed the combative midfielder from Paços Ferreira in 2013 for €1million. He was an unknown quantity and arrived without any fanfare. When Nampalys Mendy left the club to replace N’Golo Kanté at Leicester City, Seri jumped into his place and has never looked back.

Mostly a deep-lying playmaker, the 26-year-old has box-to-box tendancies and in his 97 appearances for Nice, he has contributed 11 goals and 19 assists.

This season has been much tougher for the Ivory Coast international. Nice have struggled and the six games Seri missed have played a part in their slip down the table.

Making his return as a sub against Caen, he was able to start against Lyon, Toulouse and Metz. They may have found themselves on the receiving end of OL’s wrath, losing 5-0, but they bounced back with two much-needed victories.

Seri is a difficult player to quantify, but when he is on the pitch all elements of your game are enhanced. He is the drive, the metronome and the difference maker.

What are Seri’s strengths?

Initially what you see on the pitch is a player who is up for the fight. He works intensely hard all over the pitch and he sets the tone for the team.

He never tops the charts in terms of tackles or interceptions, you can’t always measure what he brings.

An ability to harass and chase down the man in possession, he forces mistakes, and teams make more errors when he is on the pitch.

However, what sets him apart is his vision and superb ability to pick a pass.

The below graphic shows their recent fixture against Belgian side Zulte Waregem. Seri has the ball in what is a normal situation for the Ivorian. 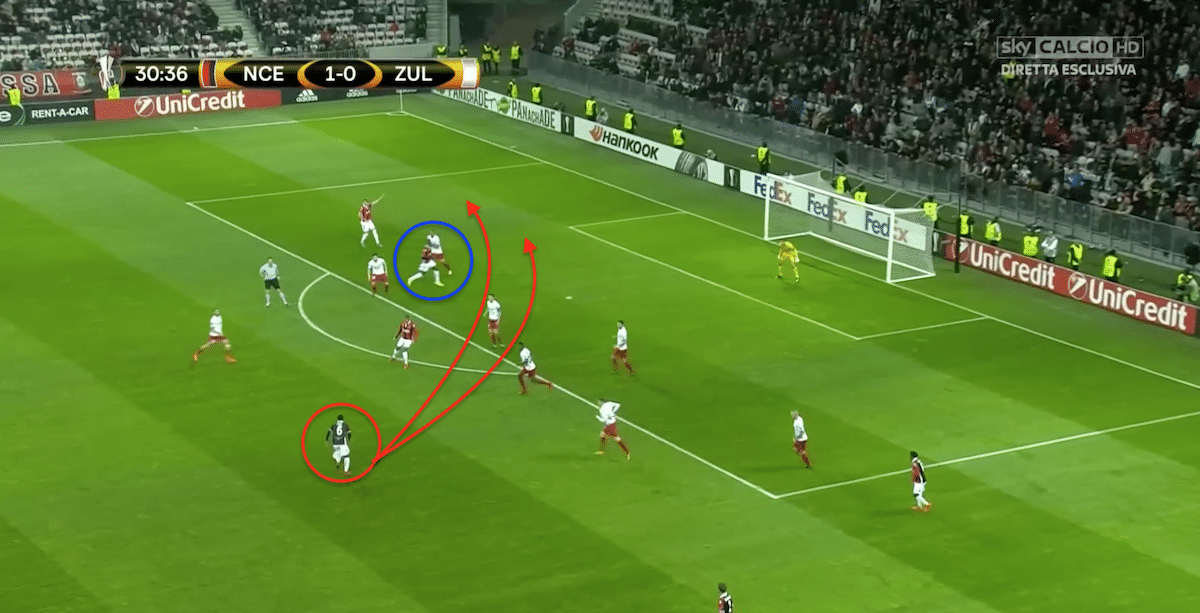 When analysing the situation, the obvious pass is either run at the far post. Players are available and Mario Balotelli (blue) is about to make a run.

Yet, Seri waits for that extra split second and Alassane Pléa (yellow) makes a darting run into the box. 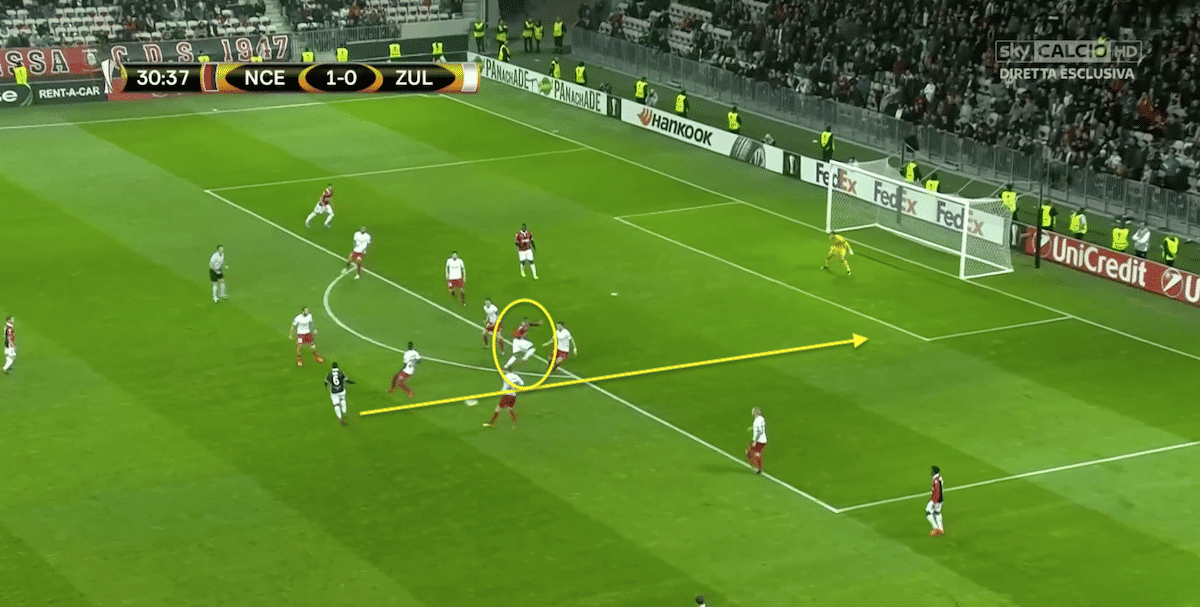 The 26-year-old not only sees his team-mate’s change of bodyweight, but picks him out beautifully with a reserve pass along the ground.

It takes out four Zulte defenders, Pléa provides the cut-back and Balotelli can smash home the finish.

There are not many players around who would have all the skills needed to create such an opening.

What are Seri’s weaknesses?

Due to his size, one area in which is lacking is aerially. Standing around five-foot-five, he will get beaten in most duels, but it helps he is usually the player taking the free-kicks rather than get on the end of them.

For someone who plays in the central of midfield, he doesn’t tackle as much as you would expect, just two attempts per game last season. He won just over 50 percent. Compare him to Kante, with 4.7 attempts per 90 and a 74.4 per cent success rate and Seri would be expected to up his contributions in that field. 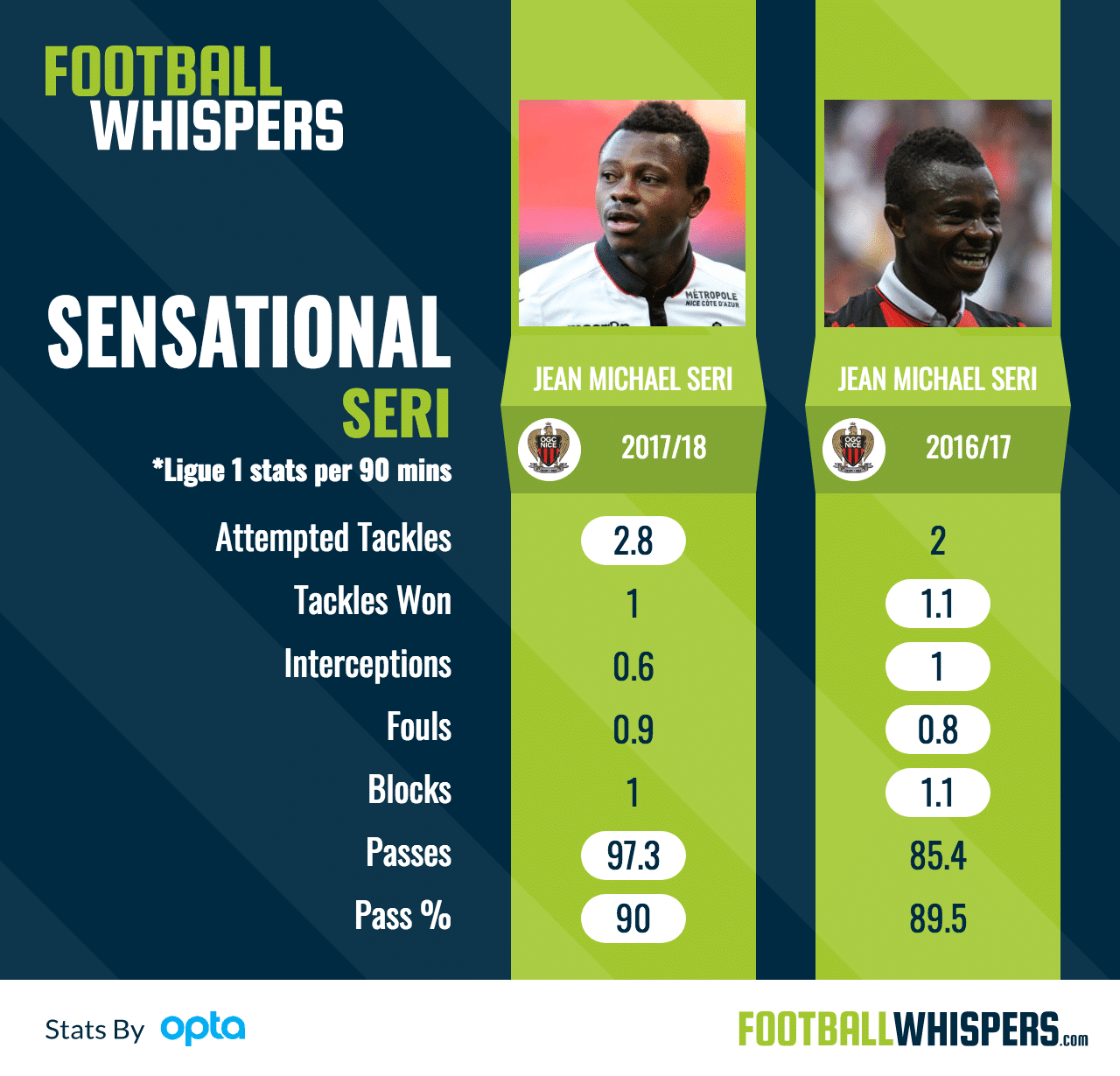 Only Marco Verratti makes more passes per 90 than Seri this season – when analysing players who have played more than ten games.

The drop has come in his defensive contributions, winning fewer tackles and making fewer interceptions per game.

How much is Seri worth?

It was believed in the summer that any bid of around €40million would have been accepted. Barcelona reportedly met the valuation but nothing happened.

Contracted until 2019, the chance of Nice picking up a fee close to their summer evaluation is very slim. He hasn’t played as well, the club are struggling and he is another three months closer to a free move.

It would be wise to start at around the €25million mark and test the resolve of the Ligue 1 club.

The diminutive midfielder has all the tools needed to be a success in England. He has the energy and drive of Kanté, but with better passing skills.

As well as providing a solid base in the middle of the park, he can create and score goals too. A perfect double threat.

Another huge bonus is the fact Seri isn’t cup-tied for the Champions League, which would appeal to any of the English clubs still in the competition.

But is very rare you can pick up a player of Seri’s class and add him to your squad in January. Buying him is an opportunity not to be missed.