As a whispy 18-year-old midfielder, wearing the bright green and black of Racing Santander, broke through on goal at Sevilla's Ramon Sanchez-Pizjuan Stadium one thought popped into his mind: be like Steven Pienaar.

Earlier in the afternoon, as excellently detailed at the time by Sid Lowe, the teenager had watched the Everton star shot a finish over Arsenal goalkeeper Manuel Almunia in the Premier League. When presented with a similar opportunity, he did the same.

“What a goal,” screamed the Spanish commentator. “What little fear. What coolness. The confidence of this lad is insulting.”

Yet Sergio Canales wasn't done. Eleven minutes after his first goal, he was put through again. Sevilla goalkeeper Andrés Palop came out to meet the youngster. Canales manoeuvred around him with ease. He then feinted to cut the ball back onto his left foot and that fooled the covering defender. The finish was an easy one.

“Has this kid got no shame?” the excitable Spanish commentator cried.

Such was Canales' performance that night that when he was substituted with a little under 15 minutes to play, the Sevilla fans gave him a standing ovation.

A star had been born.

Yet for several years that night in Seville was deemed the highlight of Canales' La Liga career. Injuries played their part but his decision to move to Real Madrid at the end of his breakthrough season with Racing was questionable.

He played just 518 minutes of first-team football during his first, and what proved to be only, season with Los Blancos. In the summer of 2011, he joined Valencia on a two-year loan.

It was at Mestalla that the injuries started. In October 2011, Canales suffered a partial tear of the anterior cruciate ligament in his right knee. He was ruled out for six months.

The then 21-year-old returned the following April only to relapse at the end of the month; another tear of the same ligament would sideline him until 2013.

Valencia took up their option to sign Canales while he was out injured, a show of faith in the midfielder. Yet 18 months later he was sold to Real Sociedad for just €3.5million. His star was fading.

At La Real Canales found the consistency his career needed. He played 43 times in his first full season with the club. And he was a regular starter in his second until injury struck yet again – this time a ligament tear in his left knee.

He returned, his knees now both heavily scarred, and spent two more seasons with Sociedad, the second saw him net on five occasions, his biggest haul since his breakout 2009/10 campaign.

In the summer, though, Canales decided to leave the club on a free transfer and joined Quique Setién's Real Betis.

“In football, nobody knows me better than him,” Canales explained. “I was never coached by him but he was my idol at Racing and he has known me since I was ten years old.

“I consider him a top coach, and it's a pleasure to be directed by someone who sees football as I see it.”

And under Setién Canales has, finally, lived up to his undoubted potential. 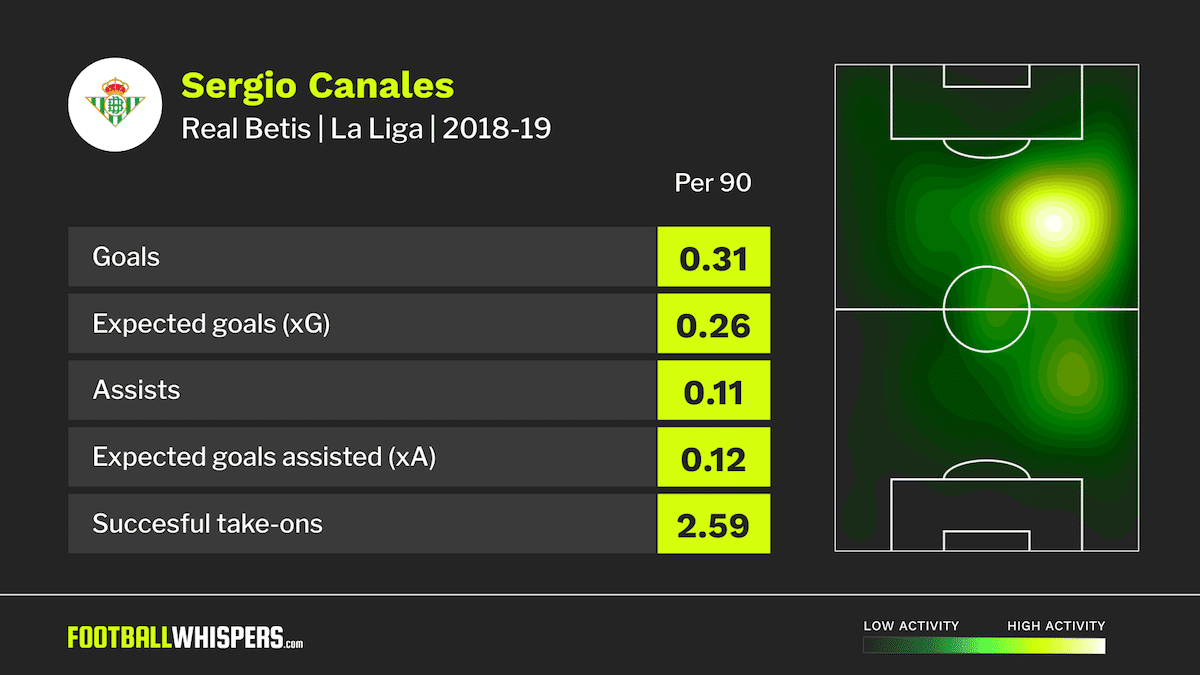 Deployed in a No.10 role or on the right of a three-man midfield, the 27-year-old has been one of the standout performers in La Liga this season. His guile and sublime technique remain and, more impressive given his history of injuries, is the physicality his game contains.

He works tirelessly without the ball; closing down opposing midfielders, restricting space and cutting off passing lanes. His incredible fitness level is partly down to Sergio Sukunza, the midfielder's personal trainer, but Canales, aware of the fragility of a footballer's body, does more gym work than ever before.

“He is so demanding with himself that sometimes we have to stop him in the sessions so he does not get too loaded,” Marcos Álvarez, Real Betis' physical coach said.

All the work and effort is paying off, though. Canales has scored eight times this season, six of which have come in La Liga. And these goals haven't been mere window dressing – he has struck against Real Madrid, Barcelona and Atlético Madrid this term.

His performances have put him in contention for a call-up to the Spanish side. Despite his talent the midfielder has never been capped by his country at senior level.

“Luis Enrique will be watching Canales,” Setién said after the win over Atleti. “I do not get involved in his work but, of course, he is a footballer who is at an extraordinary level.

“He works hard, takes great care of himself and is getting the results. I'm happy for him because of everything that has happened; overcoming what he has overcome has a lot of merit and doing what he is doing is enormous.”

It has taken almost a decade but that whispy teenager has finally become the player Spanish football hoped. It's not hard to imagine the stars of the future watching him and thinking: be like Canales.