Only Eric Brook has scored as many goals for Manchester City as Sergio Agüero.

But while Pep Guardiola's free-scoring side seem set to break all sorts of goal records this season, the Argentine striker was getting along just fine before the Spanish coach turned up.

Of course, Guardiola's quick-passing attacking style suits Agüero's game to a tee, but there been no dramatic change for the man himself this or last season.

His penalty in the recent win over Burnley meant he had equalled the club's record of 177 goals, set by Brook.

His predecessor played 453 matches for the club until 1940. But the Argentina international has scored at a better rate – after 262 games.

And he has been scoring for fun since he got two on his debut, as a substitute against Swansea in August 2011.

That was the first time he started paying back the £38million transfer fee City forked out to bring him over from Atlético Madrid, where he had been their top hitman too.  He has kept repaying it with goals ever since.

The man they call Kun, after a cartoon character he resembles, has notched 20 or more in four out of his six seasons so far in the north-west.

His latest City manager, Pep Guardiola, appreciates the success too and believes there are more goals to come.

“He missed three weeks [before the Burnley game] and that takes away some rhythm but when he breaks it, it will be something special,” Guardiola said.

“It is so important for him to be that top scorer in the history of the club and we are happy to be in that moment with him. He should pay a tribute to us! He should invite us to dinner maybe. One more goal… it's going to happen sooner or later.

More often than not, for Agüero, it happens.

But he is unlikely to score as significant a goal as his injury-time strike against QPR in 2012; it won City their first title in 44 years in the most dramatic of circumstances.

Away from his club records, he has also scored more Premier League goals than any other non-European.

He ticked that off earlier this season with his 124th Premier League goal, overtaking Dwight Yorke at the top of the international ranks.

The man born into poverty in Buenos Aries has done well for himself. One of seven kids, his mum was a cleaner and dad was a baker and taxi driver.

Agüero made his senior debut for Independiente when he was just 15, having joined the club aged nine. He was only 17 when he left for Atlético, in Spain, for £20m.

He now earns around £200,000-a-week including bonuses and lives in a stunning house in Alderley Edge, where he is said to like the wet climate. His car collection, meanwhile,  includes a £260,000 Lamborghini Aventador.

Agüero famously clinched the first of two Premier League titles at the end of his first season and has also won the League Cup twice with City.

He won the Golden Boot in 2014/15 but has not just reserved his goalscoring exploits for his clubs. 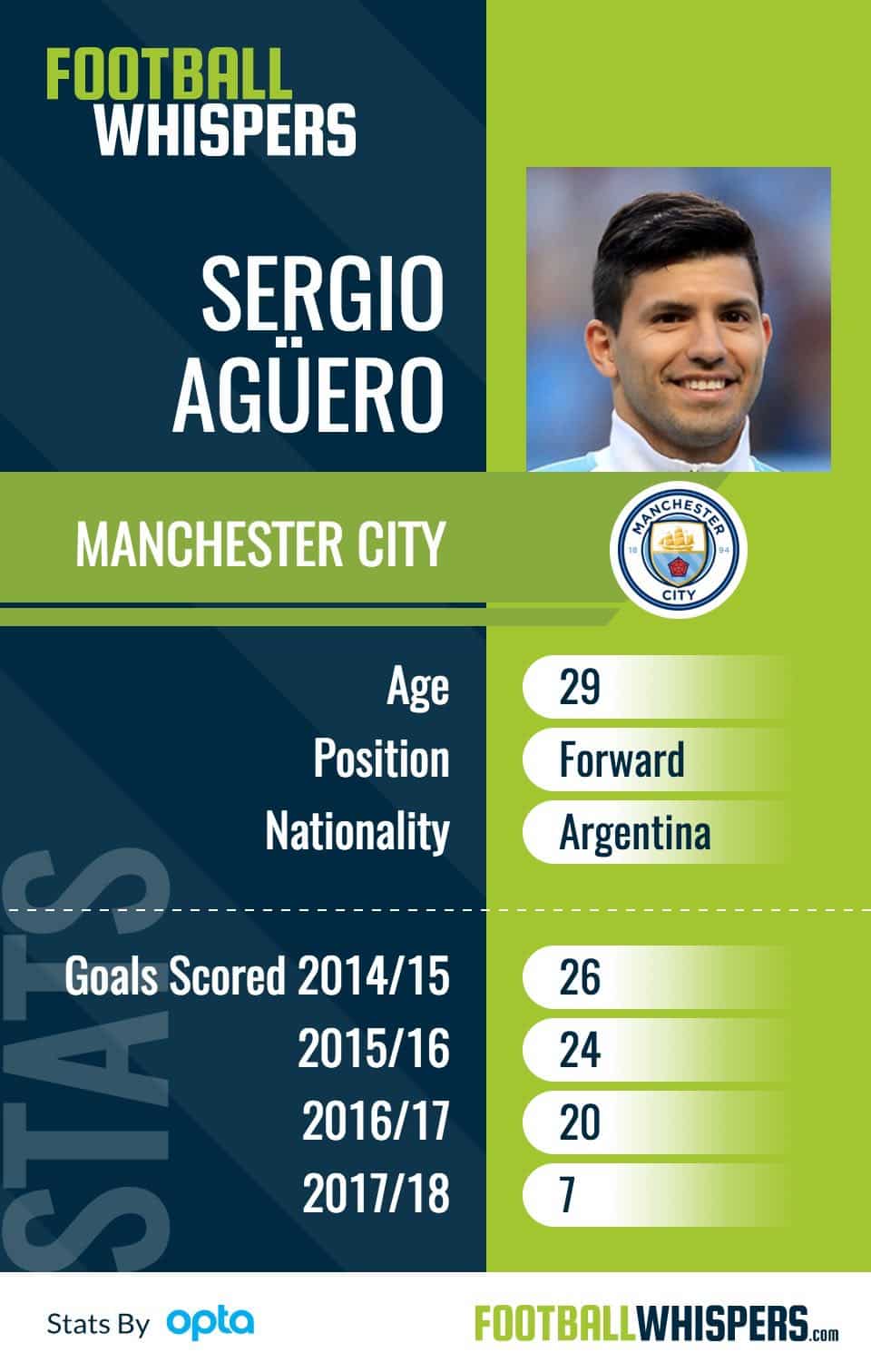 Argentina, for whom he is on longer guaranteed starter, have benefitted to the tune of 34 goals.

That puts him level with his former father-in-law Diego Maradona and one behind third-placed Hernán Crespo. Lionel Messi (58) and Gabriel Batistuta (54) are the top two from their South American country.

In England, his goalscoring feats have often been spectacular. He became only the fifth player to net five goals in a single Premier League match against Newcastle United in 2015.

That came when his side trailed the Magpies 1-0. Agüero struck five times in 21 minutes to help secure a 6-1 win.

He followed that up with a hat-trick in a 6-0 success at Watford the following week. The second goal of that treble was his 200th top-division strike since he arrived in Europe as a 17-year–old.

But it is at City where he will be most fondly remembered. He will undoubtedly become their greatest goalscorer and his record will certainly take some beating.