The report correlated with the overwhelming feeling that change is on the horizon at the Camp Nou, a feeling crystallised primarily by the imminent departure of manager Luis Enrique, but also by some momentous defeats, an early Champions League exit, and the threat of losing the La Liga title to Real Madrid.

Where Sergi Roberto stands amid all this talk of change is unclear. At present, the 25-year-old’s role at Barcelona lacks definition both in terms of his exact position on the pitch and his importance to the team more generally. But he could be pivotal to the new era.

The player’s career has been one of clear peaks and troughs. As a youngster, he had a choice most could only dream of as Real Madrid battled Barça for his signature. He chose the latter and, years down the line, he was seen by some as the successor to Thiago Alcântara, who left for Bayern Munich in 2013. 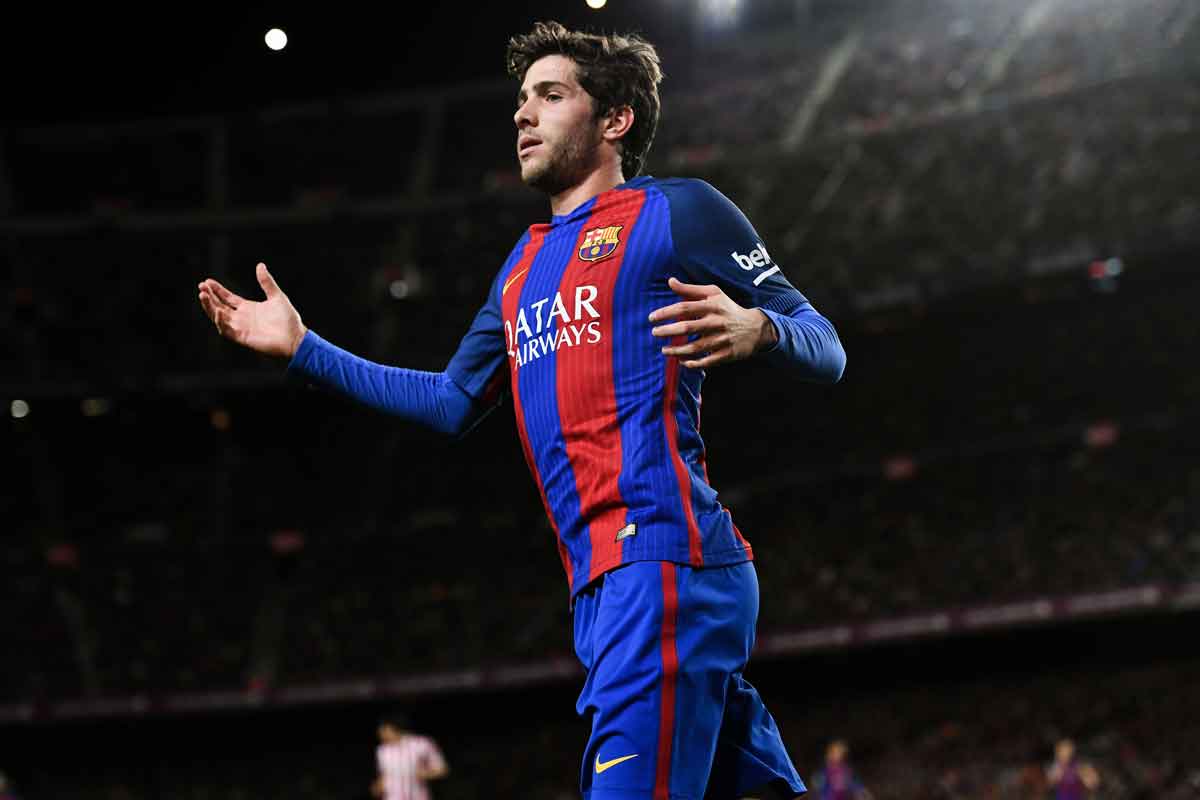 However, there was always a vivid stylistic difference between the two La Masia products. While Thiago played with a vibrant playfulness and imagination, Roberto’s game was, and is, based around efficacy.

Unfortunately, efficacy isn’t quite enough to stand out in a team filled with individuals of such extraordinary talent. And, come 2015, two years after some had predicted his rise, it looked as if he would be on his way.

Yet, just as Roberto’s time at Barcelona appeared over and done with, a crucial piece of tactical forethought by Enrique re-energised the player, breathing new life into his career.

Converted to right-back, he took advantage of Dani Alves’ dip in form and the enforced absence of Aleix Vidal due to a transfer ban to establish himself as a serious first-teamer. And, more than merely filling in, he impressed with his displays.

Club legend Xavi Hernández was encouraged enough to publicly praise Roberto. “The key here is trust, and he’s showed a consistently high level after playing three, four, five games straight,” he told Marca. “Sergi has a lot of quality, both technically and physically. He can adapt well out wide, inside and is having some great performances. I’m happy for him because he’s a guy who’s not raised his voice, worked hard, [and] been sincere and professional in his approach.”

More than coincidence or luck, the player’s conversion had been well planned by Enrique. However, after a strong start, questions were asked over the long-term viability of the experiment, particularly considering Alves’ departure for Juventus last summer and Vidal’s struggle with injuries and form.

The 4-0 away defeat to PSG in the Champions League second round first leg seemed a seminal result for Barcelona as a club. And it was equally momentous for Roberto, for all the wrong reasons.

Isolated by the team’s lack of cohesion and compactness, and humiliated by the pace and skill of Julian Draxler, the 25-year-old was torn apart. He was singled out for criticism and herded into the role of ‘weak link’. His career was, apparently, at a crossroads.

But, in one of the most dramatic villain-to-hero comeback stories in recent football memory, Roberto helped to seal Barcelona’s progress beyond their French rivals to the Champions League quarter-finals, scoring an incredible last-gasp goal to seal a stunning 6-1 home win.

That was one of two major moments in big games that have helped to redefine the player’s image ever so slightly.

The other moment came against Real Madrid last month when, in the dying embers of the game, he set off on a mazy run that took him from right-back to the heart of the opposition half. From there he laid off to André Gomes, who set up Jordi Alba, who crossed to Lionel Messi, who won the game with a typically accurate finish.

But Roberto’s current and future importance to Barcelona is about more than moments.

It also highlighted the perceived disparity between the Brazilian and his successor at the Camp Nou. But this comparison is essentially an unwinnable one for Roberto, who has proven himself to be a sound full-back in his own right, in his own style.

It’s worth noting that statistically, when comparing his form this term to Alves’ last season, the Spaniard comes out on top. He is a more successful dribbler, a more efficient tackler and passer, and has created comparatively more chances. 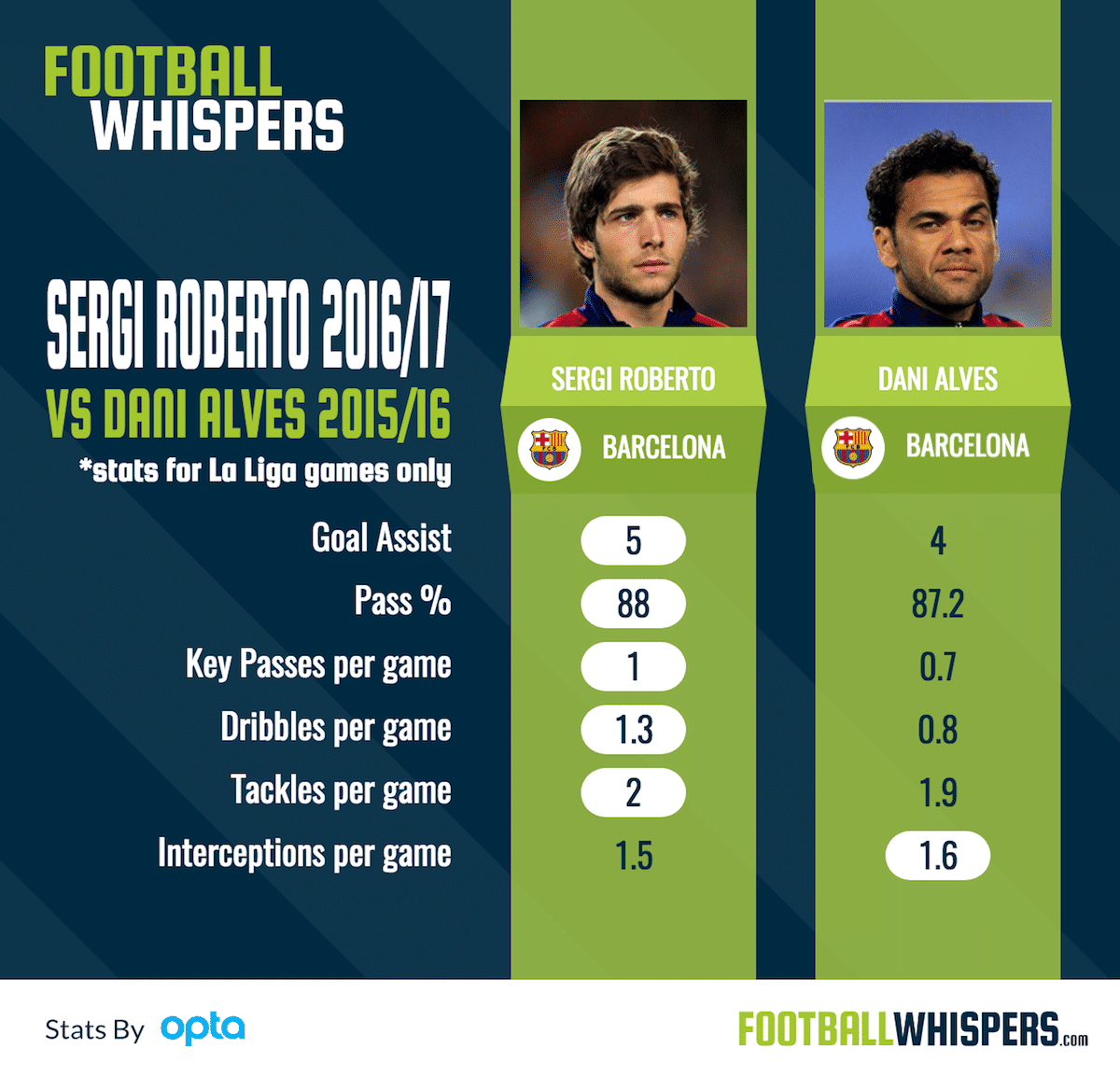 The numbers aren’t everything necessarily, but they provide a positive snapshot of a player who is continuing to learn his trade in a relatively new position.

Roberto’s flexibility could see him move back inside, or further forward, down the line. Indeed, Enrique has been keen to emphasise this aspect of the player’s game. Speaking in a press conference last September, the manager responded to a question about the 25-year-old’s best position by saying: “It depends on the situation. I think there is no better [player on the] right … than Sergi Roberto.

“I have seen many games, and I can't see a better player than him for this position, to play for Barcelona, because we are a team with a lot of possession. But he can [also] play inside or [as a] pivot. I love that he feels good playing at that position. It is very good for us to have a versatile player like him.”

For many players, versatility is seen as a curse, a one-way road to a utility role. But for Roberto, it could be an opportunity. His ability to play in defensive or central midfield, or as a winger, as well as at right-back, could give him an opportunity a specialist wouldn’t get.

There is a chance that he could become the 12th man in an exciting new era. But, at a club like Barcelona, the 12th man is vital.