Serge Gnabry has the eyes of Europe firmly fixed on him.

The Bayern Munich winger put on a finishing clinic at the Tottenham Hotspur Stadium on Tuesday night. He stunned the hosts and, in the process, the 24-year-old joined an exclusive club of players to have netted four goals in the Champions League alongside the likes of Marco Van Basten, Lionel Messi, Cristiano Ronaldo and Robert Lewandowski.

To say this level of performance was expected would be a lie. Gnabry is one of Bayern’s key attackers but heading into the clash against Spurs he’d found the back of the net just once this season, with that single strike coming in the 3-2 win over Paderborn.

And the former Arsenal youngster had previously failed to open his account in Europe’s premier club tournament despite making his debut in the competition, for the Gunners, in the 2012/13 season.

Gnabry played seven minutes that night and had to wait until the 2018/19 campaign to make his full debut. He made seven appearances for the Bavarians as they crashed out to eventual winners Liverpool in the last-16.

He registered an assist but failed to claim a goal, something you wouldn’t have guessed watching him run riot against last season’s defeated finalists.

Gnabry was devastating in the area and electric out of it. The one-time West Brom loanee managed to shine brightest in what was an all-star group of players.

However, just because this performance wasn't expected does not mean Gnabry hasn't been threatening to do something spectacular for quite some time.

He was never really given a fair chance at the Emirates. A loan to the Hawthorns was a poor fit and the former VfB Stuttgart youngster appeared to stagnate with no clear path to allow him to fulfil his potential.

Gnabry needed a fresh start and despite Arsène Wenger trying to tie him down to a long-term deal, the winger forced a move. Werder Bremen stumped up a reported £5million and he returned to Germany.

At the time it didn't look like bad business. The Gunners spent £100,000 to sign the teenager, he wasn't getting first-team football and they made a huge profit. But looking back, it's clear Arsenal made a big mistake.

Hindsight is a wonderful thing. Gnabry has had three years to hone his craft and improve as a player. The thing is, though, the right-footed, firecracker of a winger immediately impressed on his return to his homeland.

This wasn't a slow burner by any means. In his debut campaign with Werder Bremen, he involved himself in 12 goals in close to 2,000 Bundesliga minutes. He wasn't a creative force, registering just one assist, but proved himself to be a goal-getter.

His form convinced Bayern to activate a clause in his deal to sign him for around the £8million mark. He was loaned to Hoffenheim for a season to get more minutes under his belt. 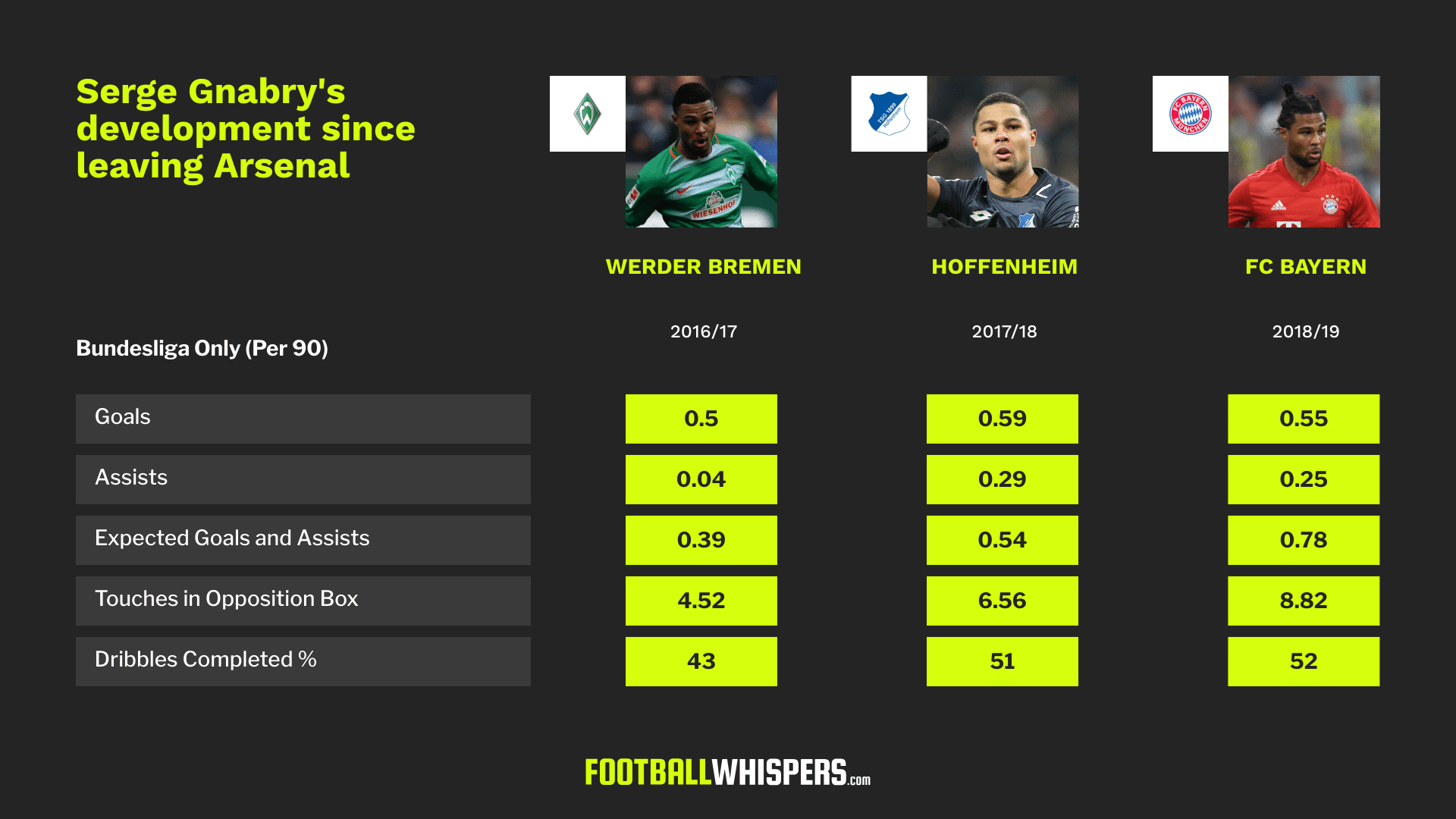 Under Julian Nagelsmann, his productivity improved. Though limited to just 1,500 minutes, he involved himself in 15 goals (five of which were assists). As seen in the graphic above, his underlying numbers also spiked. Gnabry's expected goals and assists per 90 jumped from 0.39 to 0.54.

In the two years post Arsenal, the versatile forward netted 21 goals and chipped in with six assists all while averaging a 0.46 expected goal involvement. Impressive numbers playing for sides who don't usually find themselves near the summit of the Bundesliga.

The big question heading into the 2018/19 campaign was whether or not Gnabry could make the step up from mid-table overperformer to being a consistent threat for the best team in the country.

The short answer to this is yes, he could.

He played more minutes for Bayern than he did for Hoffenheim and his goal output was only 0.04 down, the identical difference in his assist return, too.

The difference was when looking at his expected numbers. Again, they took a huge jump, from 0.54 to 0.78. Furthermore, since his arrival in Germany, his touches in the opposition box have almost doubled while he's attempting and completing more dribbles.

The caveat is he's now playing alongside better players, but that shouldn't take anything away from the fact Gnabry is now performing at a higher level on a consistent basis.

All he needed was the trust of a manager, patience to make mistakes and the opportunity to play football. The Gunners refused to give him that and he's thriving elsewhere.

He's one of a few former Arsenal players who happen to be excelling since departing from the Emirates. And if they aren't careful, Reiss Nelson could be another player they rue not giving a proper chance to.