Liverpool have a thing for Dutch centre-backs.

Virgil Van Dijk kicked it all off. The Reds had to wait six months to sign him. But he was worth the wait. He wasn't the only Dutch defender the club tried to sign during the summer of 2017.

Perr Schuurs was a name mentioned. Starring for Fortuna Sittard at a young age, his commanding performances and versatility resulted in Europe's elite courting him. He eventually signed for Ajax and looks set to replace Matthijs de Ligt for the Amsterdam club next season.

Liverpool got their own back the following season when they raided the Eredivisie champions to land Ki-Jana Hoever ahead of Manchester City, Manchester United and Chelsea.

The Reds have made it a hat-trick of Dutch centre-backs with the signing of Sepp Van Den Berg. The 17-year-old caught the eye for PEC Zwolle during the 2018/19 season and reportedly looked set to join PSV until Liverpool intervened.

Ajax and Bayern Munich had also tried to lure the talented teen away from MAC³PARK Stadion but Van Den Berg has opted to continue his development alongside compatriots Van Dijk and Hoever.

In a world of big money movers, a £1.9million move for a 17-year-old with fewer than 1,000 Eredivisie minutes to his name won't make much of a splash. But this could turn out to be a genius signing by Liverpool down the line.

According to the Evening Standard, the club feel the Dutch starlet is showing a similar potential to that of Joe Gomez when he was at Charlton Athletic. The England international, when fit, kept pace with Van Dijk earlier on in the season, even stealing the spotlight away from the PFA Player of the Year in some matches.

If Van den Berg develops as expected, the Reds have saved themselves £60million.

But what convinced Liverpool to make the teenager their first summer signing, and why is he being tipped to be involved with the first-team as early as next season?

Flagged in a piece by the Liverpool Echo, he was one of only ten teenage centre-backs to have played 750 minutes or more across the Eredivisie or any of Europe's top five leagues.

Trust, leadership and confidence can't be quantified but all were key in him getting into the first-team. There's a maturity to his game you rarely see in a young defender. It's an attractive trait and presumably one of the reasons he caught the eye. 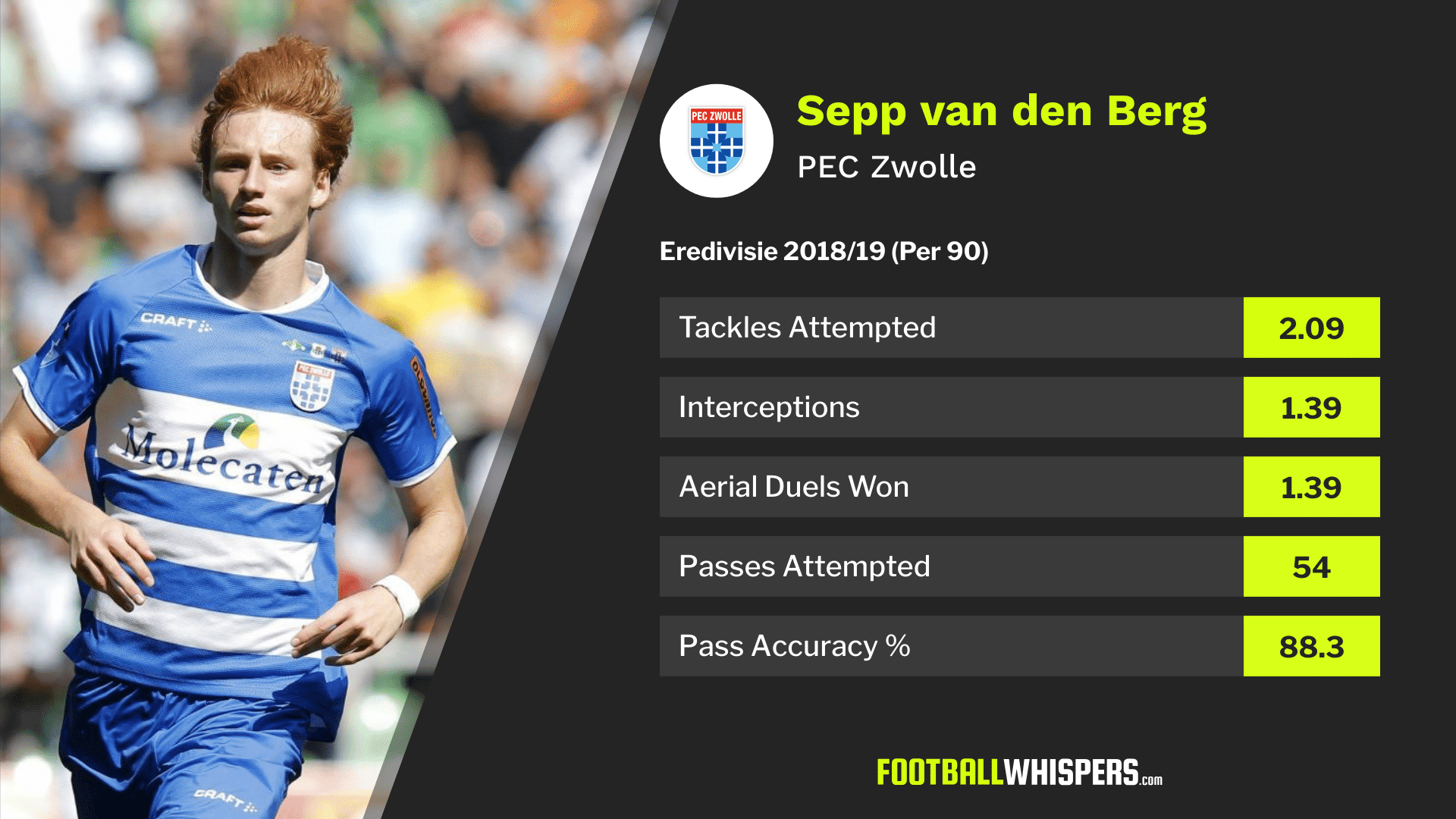 In terms of stats, it's always tricky to judge defenders. A busier defender will have better stats purely because they're having to do more work. Does that make them a better defender? Most of the time, no.

So while his numbers, on paper at least, don't scream amazing defender, there's a lot of content needed. For example, the 2.09 attempted tackles per 90 show he's not overly busy in that sense. It's the same with the 1.39 interceptions. Aerially he's not tested often, competing for 3.4 on a per 90 basis. At 6ft 3ins, however, he's going to be of use in that area.

But these numbers are in the current system he's being deployed in, that isn't to say they won't spike in a different system when he has to do more of one thing.

The key stats to take from the graphic above are his passes attempted and his pass accuracy. He's used to seeing a fair amount of the ball, averaging 54 passes per 90, and he's fairly accurate, despite playing a number of long balls, close to six per 90.

"I’ve seen what kind of players from the Academy grew into the first team here. It is unbelievable, especially when this kind of big club does that." ✊ pic.twitter.com/Uep7fwEtTM

The centre-backs at Liverpool often average the highest number of passes in a game. They have to be confident and composed on the ball, and Van den Berg is just that.

The 17-year-old is rarely dispossessed, just once in the Eredivisie last season despite averaging 0.4 dribbles per 90. He steps into midfield, similar to Gomez and Joël Matip, and slaloms his way past opponents before picking out a pass with either foot.

However, he's also got the Van Dijk-esque ability to play a pass over the top and into the channels with unnerving accuracy and ease. He completes an impressive 65 per cent of his long passes.

He plays 25 per cent of his passes forward, similar to the Liverpool No.4, and ten of his 54 passes come in the opposition's half of the pitch. The teen likes to step up and defend in a high line. On average he wins 2.1 possessions in the middle third per 90.

Van Den Berg also appears to be confident when defending one-on-one in wide areas. Some centre-backs struggle here but the youngster manages the situations well. In this Liverpool team, with the full-backs often high up, it'll be a good skill to have.

One area of his game he will have to improve upon is just how often he goes to ground. He times his tackles well but in the Premier League you're asking for trouble if you slide in a lot of the time. However, learning from Van Dijk should see him develop that part.

He's got the makings of a high-level centre-back who is ideal for a possession-based side. His signing could well be another Michael Edwards masterclass.