Newcastle United fans were well and truly greeted to the silly season of the summer transfer window this week when a report from John Percy at the Daily Telegraph stated that the club were willing to sell winger Matt Ritchie to Championship sides Stoke or Middlesbrough for £15million.

Magpies supporters were unanimous in their bafflement and hoped their club had no intention of selling the Scottish international. On a fan poll conducted by Newcastle United blog The Mag, 94 per cent of fans were in agreement that Ritchie should be kept at the club and play a pivotal role in next season’s Premier League campaign.

However, the Magpies are, unfortunately, far from the most consistent and stable club in the top flight. And although it may seem bizarre on paper, there’s every reason Newcastle could sell their prized winger if the right offer came in. But just how much Rafa Benítez’s side suffer for it?

With three goals and six assists in last season’s league campaign, Ritchie was undoubtedly one of Benítez’s most effective players. Either playing as a winger or sometimes as a No.10, the former Bournemouth man picked up important assists against West Ham United, Swansea and Stoke, as well as goals against Arsenal and Manchester United to help secure Newcastle’s ultimate tenth-place finish and another season in the Premier League.

Newcastle are lacking in quality across their squad and there certainly aren’t too many wide players in Benítez’s squad that could suggest there’s fat to be cut from this team.

The Spanish coach has Christian Atsu and Jacob Murphy, but neither player did enough to suggest the Magpies would be better off without Ritchie next season. And when we look at the stats that becomes abundantly clear. 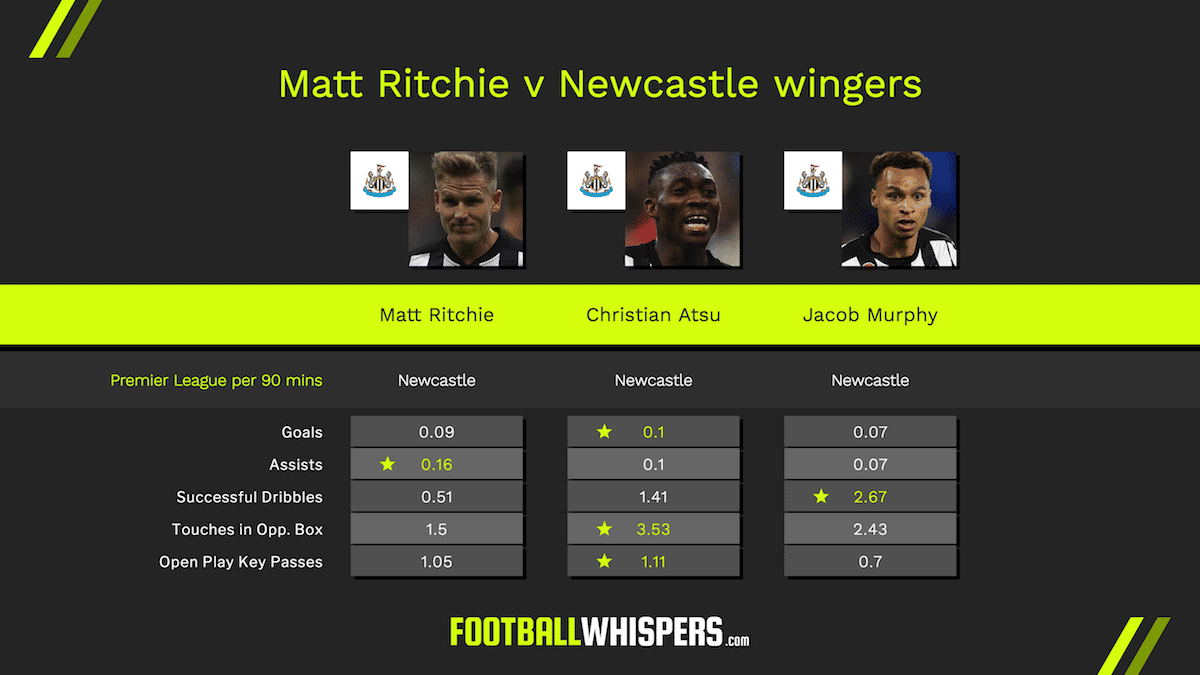 There are some metrics in which Ritchie falls behind his wing counterparts. Atsu’s 1.11 key passes per 90 is slightly higher than Ritchie’s (1.05) and Murphy’s ability to dribble with the ball and skip past opposing defenders becomes rather evident with 2.67 successful take ons per 90, which is considerably more impressive than the Scot (0.51) or Atsu’s (1.41).

However, there’s no denying that the 28-year old was Newcastle’s best player when it came to creating goals for his team-mates or simply getting the ball in to the opposing box.

Last season Ritchie averaged 0.32 big chances created per 90 – again better than either Atsu (0.25) or Murphy (0.23). Unsurprisingly, therefore, he notched more assists over the Premier League campaign than his team-mates combined (5).

Benítez may wish to further explore the idea of playing Ayoze Pérez on the wing and. However, last season the Spanish forward failed to score a single one of his ten goals from a wide position. The 24-year old may be able to do a shift on either wing, but he certainly doesn’t look his best when he does it.

Newcastle have been linked with a host of wide players in recent months and that may have something to do with the club’s apparent eagerness to move Ritchie on.

Former Magpie Andros Townsend and Middlesbrough flyer Adama Traoré are both reportedly Newcastle transfer targets. But replacing Ritchie with either would not be an upgrade. While Townsend has become a steady Premier League presence, Traoré's best body of work has been in the second tier.

Ultimately, though, money talks and particularly at Newcastle where Benítez faces another summer of running battles with owner Mike Ashley over budget. If the North East outfit receive a big offer – even for one of their key players – they’re likely to sell.

But in Ritchie’s case the club would be releasing a key component of what made Benítez’s team so effective last season. And unless they have a rabbit to pull out of the hat there’s no obvious replacement for him in sight.