The signing of Sébastien Haller has been a long time coming for West Ham United.

Not so much in the sense that their pursuit of the Frenchman has been lengthy, but the process to get to this stage has been convoluted and seen them linked with numerous strikers.

In Haller, the East Londoners finally appear to have their man. Eintracht Frankfurt confirmed they have agreed on a price with West Ham for the 25-year-old who has travelled to London to undergo his medical.

Eintracht and @WestHamUtd have agreed terms for the transfer of @HallerSeb. Haller has now been cleared to undergo a medical in London. If all goes to plan then Haller will sign with the Hammers. #SGE pic.twitter.com/VpQNxM4y0I

Long linked with a switch to England, interest in Haller dates back to 2016 when Norwich City and Swansea City were among the Frenchman's suitors. It's a testament to his rapid ascent that he's been talked about as a Manchester United transfer target this summer.

That is thanks in no small part to the 20 goals he bagged in all competitions last season, 15 of which came in the Bundesliga to ensure Frankfurt will play in the Europa League – a competition in which he shone for the semi-finalists – again in 2019/20.

A product of Auxerre's academy, Haller made his mark at next club FC Utrecht. A return of 51 goals in three seasons in the Netherlands caught the eye of Eintracht Frankfurt who took a punt on the 6ft 3in centre forward in the summer of 2017.

His first season in Germany produced a rather modest 13 strikes in all competitions but Haller grew with Die Adler and flourished in his second season in Hesse state.

Having qualified for the Europa League under Niko Kovač by winning the DFB-Pokal, Eintracht made it all the way to the semi-finals where their remarkable run was finally halted – and only on penalties – by eventual winners Chelsea.

And while it was Real Madrid new-boy Luka Jović who stole the show for Frankfurt, bagging ten of his 27 strikes in Europe, the combination play of Jović, Haller and Ante Rebić was the driving force behind their success. 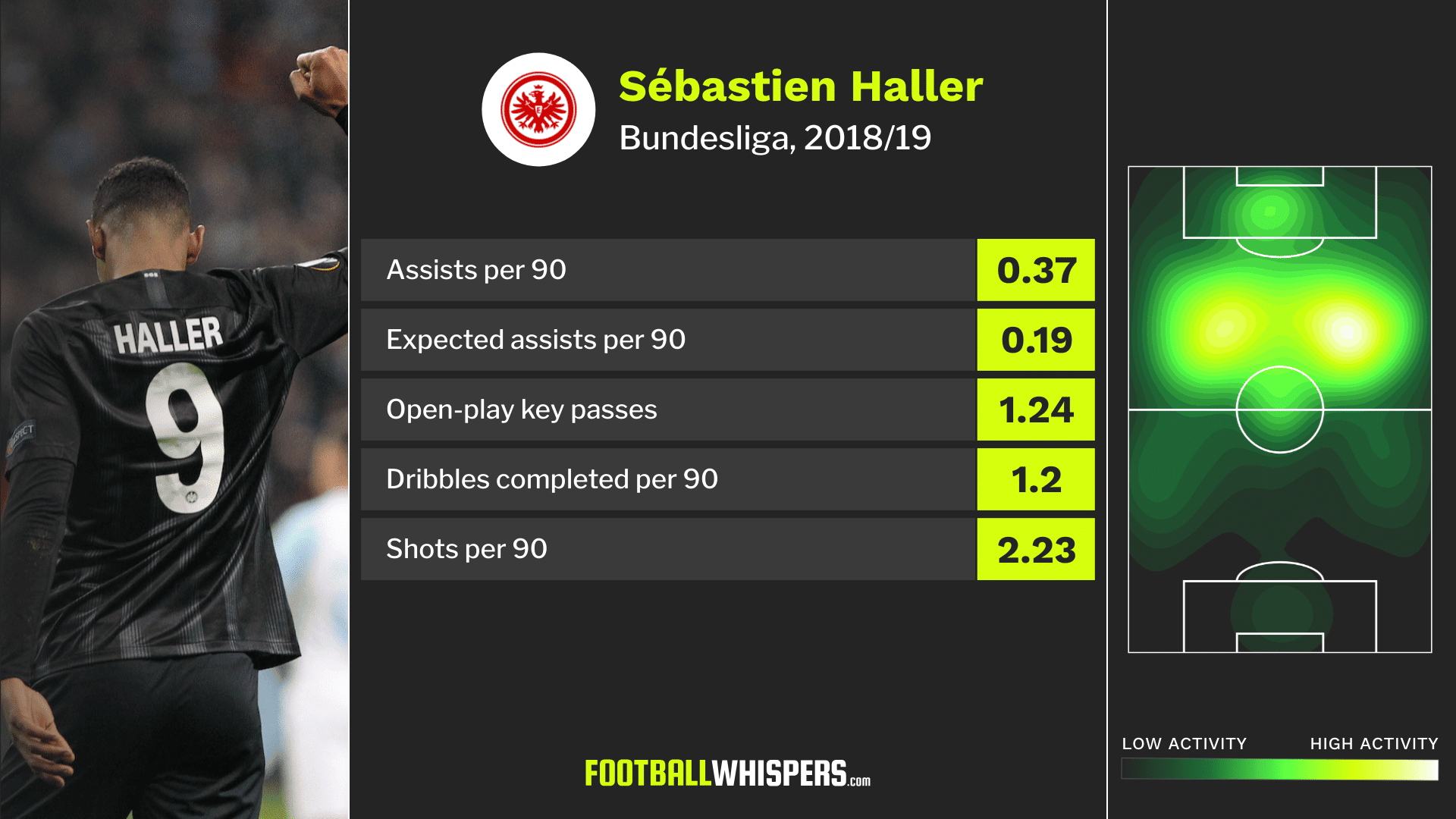 It's hard to look beyond Haller's size but it shouldn't define him as a traditional target man; someone like departed Hammers forward Andy Carroll. Although he won more aerial duels per 90 than any other Bundesliga forward last term (8.29), Haller can work the channels, drop deep and run at defenders.

That is reflected in some of his other metrics for last season. With nine assists in the Bundesliga at a rate of 0.37 per 90 he ranked fourth among the league's forwards. Haller was second for big chances created (0.57 per 90) and with 9.86 forward passes per 90 he placed ninth among his peers.

Unsurprisingly given his all-round contribution, he took a fairly lowly 5.27 touches in the opposition penalty area per 90. But when you consider what else he brings to the party, that is hardly a drawback.

Defensively he is an asset too. No other forward in the Bundesliga won more defensive duels than the Eintracht Frankfurt No.9 last term with an astonishing 12 per 90. 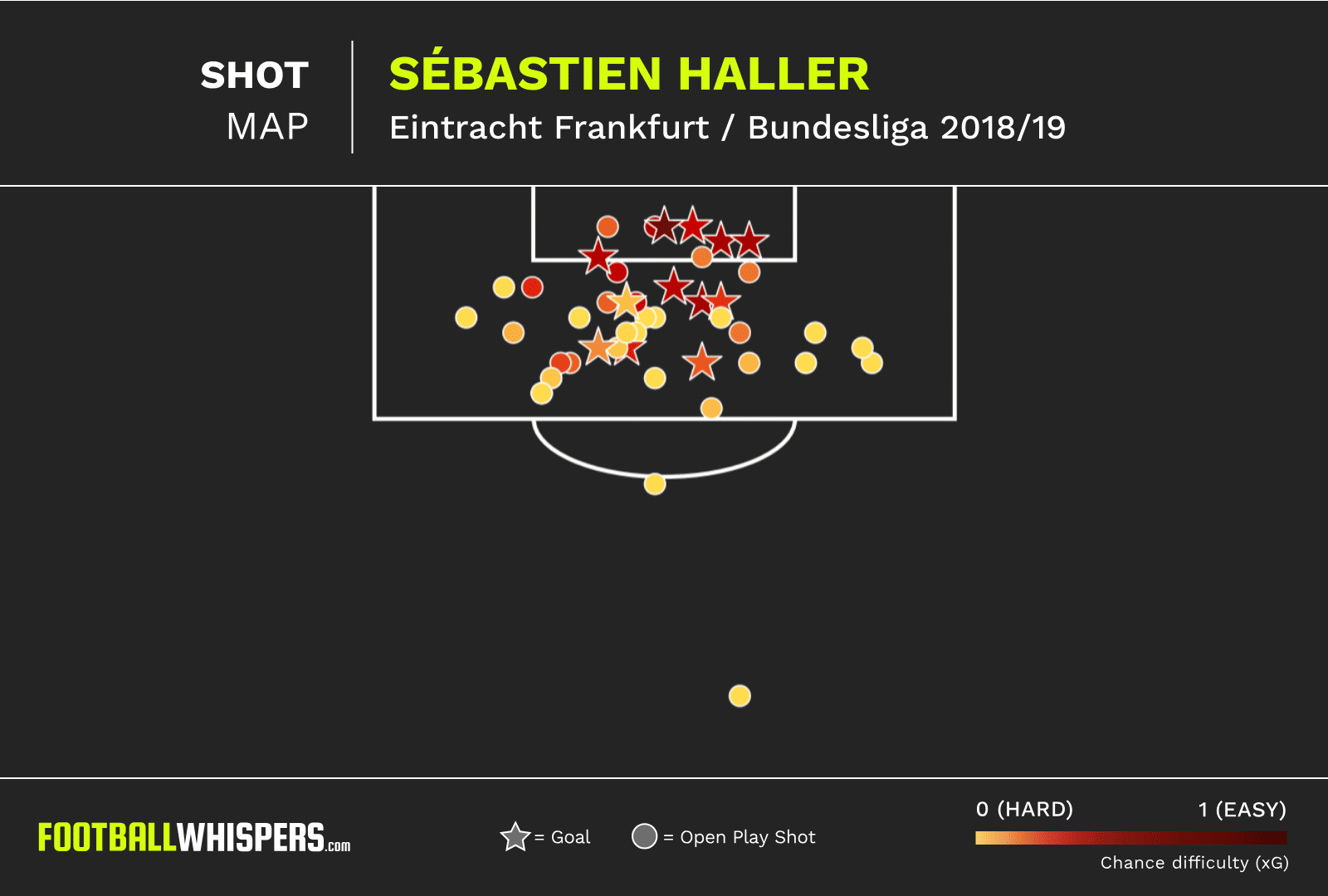 But that's not what should or will excite West Ham fans. His goalscoring will do that. With 0.61 goals per 90, Haller over-achieved against his xG90 (0.54) and post-shot xG (0.53). When you study his shot map for last season (above) it's not hard to see why he was so prolific.

The majority of Haller's shots came from a very central slice of the penalty area and only two efforts all season were taken from outside the penalty box. In other words, his chances were usually high value resulting in a higher chance of finding the back of the net.

West Ham's search for a striker has been long, arduous and littered with false dawns. Marko Arnautović, Javier Hernández and Carroll have been the closest thing to successes. At least when compared to Lucas Pérez, Ashley Fletcher, André Ayew.

They say good things come to those who wait…