Adi Hütter can count himself lucky.

Not every manager has three forwards all operating at maximum efficiency, but the Austrian's first season at Eintracht Frankfurt was turbo-charged by his devastating trident up top: Luka Jović, Sébastien Haller and Ante Rebić.

Between them, the ‘Magic Triangle' contributed to 81 of Eintracht's goals during the 2018/19 season, a staggering 89 per cent.

Unfortunately for Hütter, he won't have such firepower to call upon next term. Jović is off to Real Madrid and, while there has been no talk of Rebić's exit, Haller is a wanted man.

The 24-year-old Frenchman, who joined Die Adler from FC Utrecht in 2017, has been targeted by West Ham and Newcastle United and, as per ESPN, now Manchester United.

It's expected to be a busy summer at Old Trafford, of course, with several comings and goings as part of an extensive rebuild under Ole Gunnar Solskjær.

And an area in which the Norwegian will likely need reinforcements is up front. Having scored 65 goals during the 2018/19 Premier League season – 30 fewer than champions Manchester City – and with Romelu Lukaku seemingly set for Inter, Solskjær will need a fresh injection of ideas in attack.

Some of the names linked with United in recent weeks haven't set pulses racing.

Lyon's Moussa Dembélé, for example, wouldn't strike many as an obvious upgrade on Lukaku, but Haller is an extremely intriguing name which, if the reports are accurate, suggests United are thinking outside the box to fix their problems inside it.

Haller is a potent combination; he's a robust physical specimen with tactical intelligence and technical proficiency. A talented finisher, his awareness of space and creativity was key to Eintracht's success in Hütter's first season at the helm.

While Jović's goalscoring blitz stole most of the plaudits, Haller quietly put together the best season of his career, scoring 20 goals and adding 12 assists. In the Bundesliga, only Jadon Sancho and Eintracht teammate Filip Kostić surpassed his nine assists from open play.

The former Auxerre striker is renowned for his footballing brain. He doesn't offer the same top sprint speed as Romelu Lukaku but, like the Belgian, he uses his body to gain an advantage. A more slender build than United's No.9, Haller certainly throws himself into games; with 8.29 aerial duels won per 90, he is the Bundesliga's most dominant striker in the air.

He loves a challenge, too, winning a whopping 291 defensive duels. Equipped with impressive athleticism, balance and strength, Haller has become a nightmare for defenders, but a joy for his teammates. A crucial part of Eintracht's build-up, he created 14 big chances last season, or 0.57 per 90 minutes.

Haller is interesting from a tactical viewpoint. Although tall and aerially dominant, he is not a throwback target man. Far from it, in fact. In Hütter's impressive 3-4-1-2, he often partnered Jović up top with Rebić in ‘the hole' in between the lines of midfield and attack.

Both Haller and Rebić became adept at dropping into spaces out wide to help feed Jović. As you can see from Haller's open-play key pass map below, he has notched quite a few shot assists after taking up positions on the left and right. 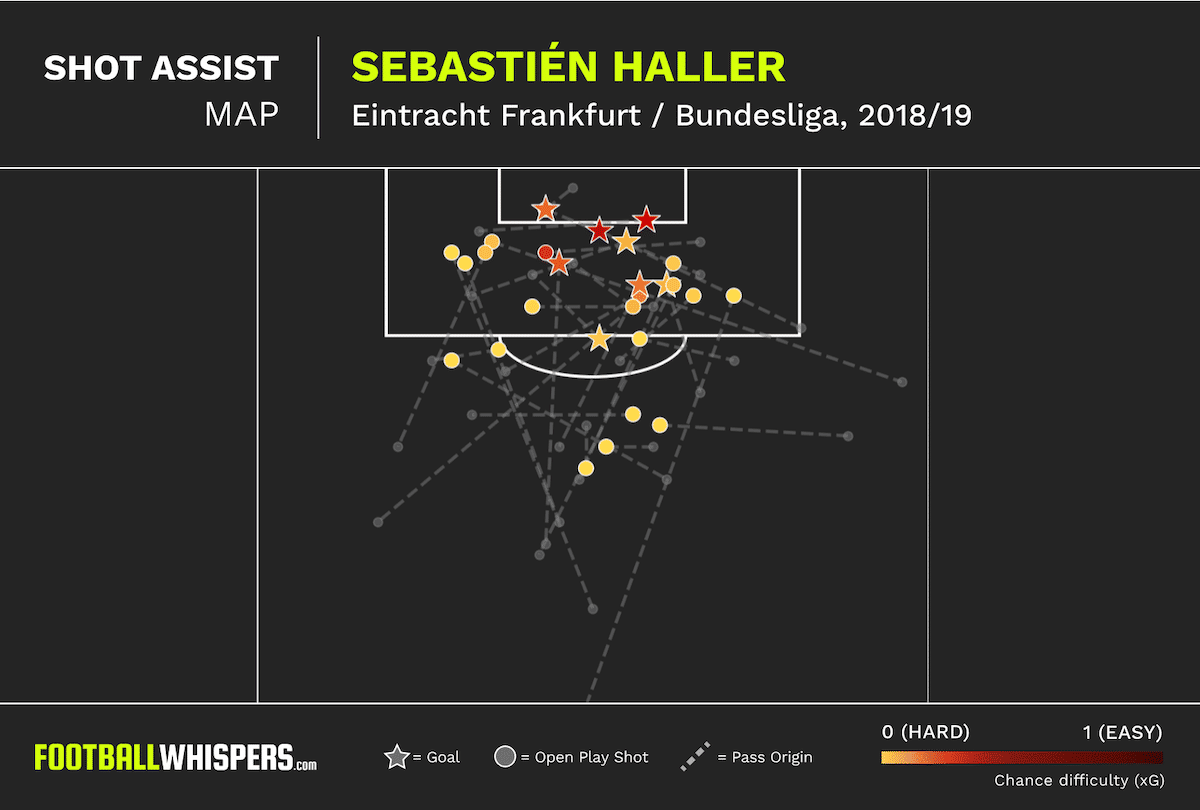 And his open-play touch map shows how often he's in possession out wide and in the area in between the centre circle and the opponent's box, where he often looks to make a key pass or keep attacks flowing. 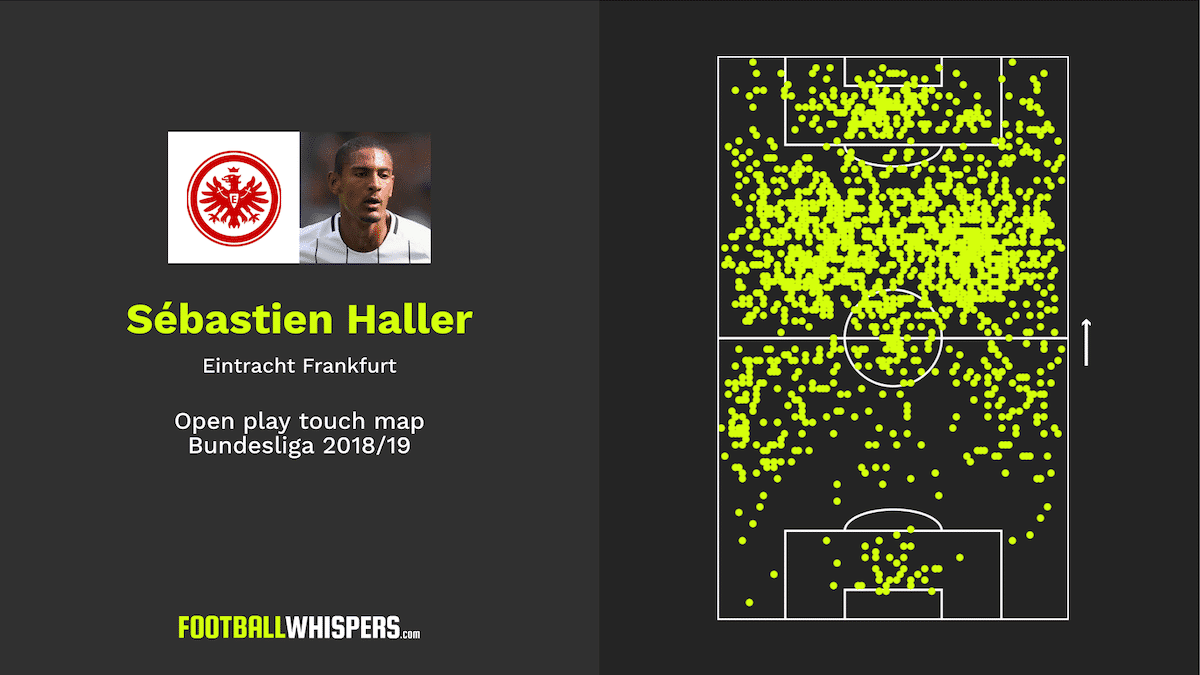 United's tactical set-up is nothing like Eintracht's, of course. Whereas the Germans have found success in adopting a three-man defence, Solskjær has favoured a more conventional 4-3-3.

Assuming he sticks with that system, Haller would take up the central position, flanked by two of Marcus Rashford, Anthony Martial, Jesse Lingard and Alexis Sánchez, none of whom look as though they'll leave Old Trafford this summer.

It would require a change in approach from Haller. He would be the clear focal point in attack and, while he has relished taking on heavier creative responsibilities at Commerzbank-Arena, he is certainly capable of bearing the burden of being the primary source of goals; his last five seasons, three of which were in the Eredivisie, his returns have been 15, nine, 13, 17 and 11.

But his well-rounded skill-set is what's attracting United. Haller not only delivers but brings out the best in those around him. Jović's breakthrough season earned him a move to Real Madrid while Rebić has flourished after making the permanent switch following a two-year loan spell.

It's easy to imagine Haller working in tandem with Rashford and Martial, both of whom could use a lift. They are two players who could benefit from Haller's style; the flick-ons, the lay-offs, the penetrative passing in behind the opposition defence. While the Frenchman doesn't have the searing pace to leave centre-backs in his wake on the break, he has the craft and guile to tap into  Rashford and Martial's potential.

If the reports are accurate, it would be a refreshing move on United's part; to capture the services of one of German football's most rounded, effective centre forwards.

He wouldn't cost nearly as much as Jović and, with the Red Devils expected to recoup a significant fee for Lukaku, Haller would be a worthwhile experiment with the potential to push United into a new era.