For the most part, Liverpool have laid out their summer transfer targets for all to see with very few surprises to date.

Virgil van Dijk, Naby Keïta and Alex Oxlade-Chamberlain have been linked with a move to Anfield for a number of months now. Dominic Solanke was first mooted to be interesting the Reds back in December, Mohamed Salah’s name appeared at the beginning of May and Andrew Robertson was tentatively linked with a move to Merseyside on and off throughout the 2016/17 campaign.

So far for fans it’s been like knowing what all of your Christmas presents are by November. There had been no indication of a mystery gift. The big one with “from Santa” on the label. The one you’re not allowed to shake, touch or even glance at until everything else has been opened.

But, according to Polska Times, supporters could be about to have that moment. They’re linking Liverpool with Polish youngster Sebastian Szymański.

He’s by no means a household name and he’s not a game changer, but the link brings intrigue. And in the football world, intrigue more often than not leads to excitement.

The report claims the Reds sent scouts to watch the 18-year-old last season after he broke into Warsaw Legia’s first-team. He impressed and went on to make a series of substitute appearances.

Polska Times go on to suggest Liverpool could be lining up a bid but that a move is by no means imminent. No fee was mentioned but the player has just the two years remaining on his current deal meaning he shouldn't cost a small fortune like some talented teenage midfielders these days.

Outside of Poland very little is known about the teenage sensation, but Jürgen Klopp has a history of identifying and developing Polish players so immediately it's a link to take note of.

Jakub “Kuba” Błaszczykowski, Łukasz Piszczek and Robert Lewandowski all had the Klopp treatment and went on to be better players. And Piotr Zieliński was on the German manager's radar last summer before moving to Napoli where he has impressed.

We've decided to take a look at Szymański and why Liverpool may indeed have an interest in him.

Why Szymański fits the Liverpool profile

When identifying midfield targets, the Reds seemingly have a certain template they use.

If you compare those who have been linked with a move to Anfield since Klopp replaced Brendan Rodgers at the helm, the majority have shared traits.

Mahmoud Dahoud, Zielinski, Keïta, Sergej Milinković-Savić are all ball carriers. Similarly, Klopp used Adam Lallana and Gini Wijnaldum as centre-midfielders last season and their ability to carry the ball forward and beat a man was noticeable.

With so many teams now looking to press it's why the likes of Pep Guardiola, Mauricio Pochettino, Arsené Wenger and Klopp have started using attacking midfielders in a deeper role.

Players used to working in tight areas under pressure who have the ability to take the opposition out of the game with a drop of a shoulder.

Likewise, Szymański appears to have this ability. He can operate across the midfield and while he may not look the traditional box-to-box midfielder, he certainly has the traits to play such a role in these modern systems.

Stats for the Polish league are scarce and limited so it would be unfair to read too much into those.

Despite his age, he's already a midfield all-rounder. He shows maturity beyond his years with his decision making, he's got quality on the ball and, perhaps more importantly, he's got the determination and the desire to better himself. 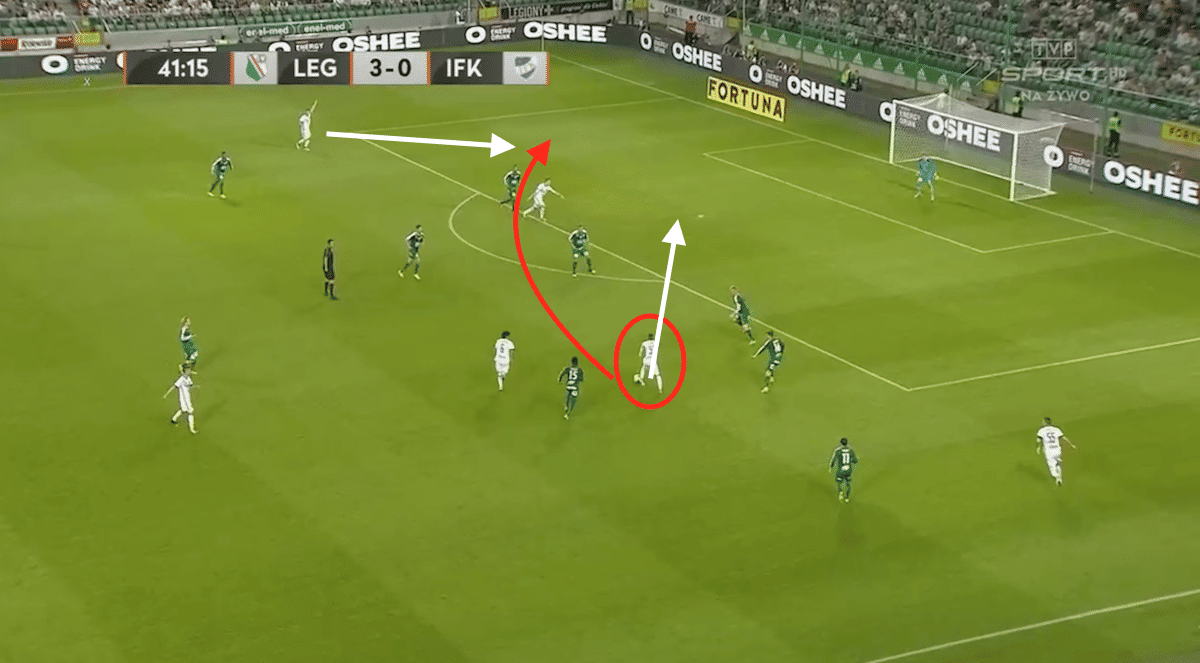 You can take the above picture one of two ways.

Circled in red, Szymański has two passing options. The first, highlighted by the white arrow, would put the striker in one-on-one with the goalkeeper but he is in an offside position.

The second, shown by the red arrow, plays the man in on the left which stretches the opposition's defence and, in theory, leaves the striker with an easier chance to score in the middle if the ball is played across goal.

He goes with the latter option but the man on the flank isn't able to control the ball and it goes out for a goal kick. A promising situation results in nothing.

Should his awareness, to spot his teammate is offside and there's a better chance if the ball is played wide, be applauded or should his lack of killer instinct be an issue?

After all, If the ball is played quick enough the linesman might not flag the striker and there's a chance his team bag a fourth. 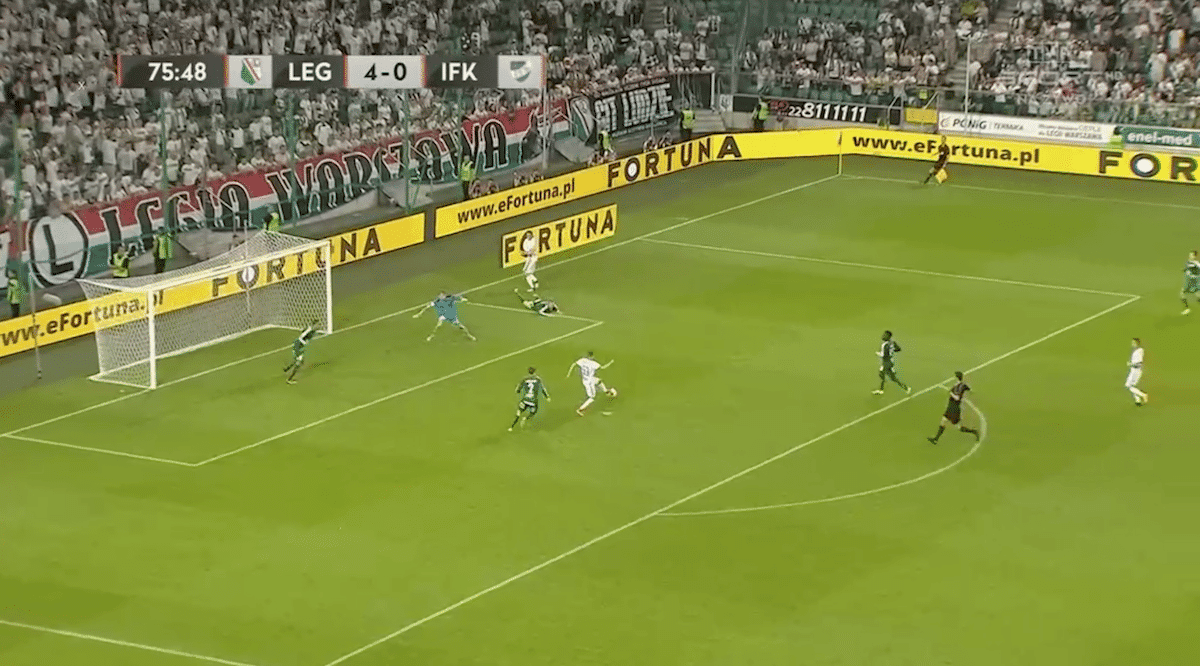 Again you get to see Szymański's awareness but this time he showcases the creative side of his game along with his quick feet. In the initial phase of play he nods the ball forward and continues his run into the penalty area.

The ball back to him, shown in the picture above, isn't the greatest for two reasons. The first being it's played behind him meaning he has to readjust his run and secondly, because it's laid back to his weaker right foot.

But he get's inventive to get the ball back onto his left foot in a dangerous area. 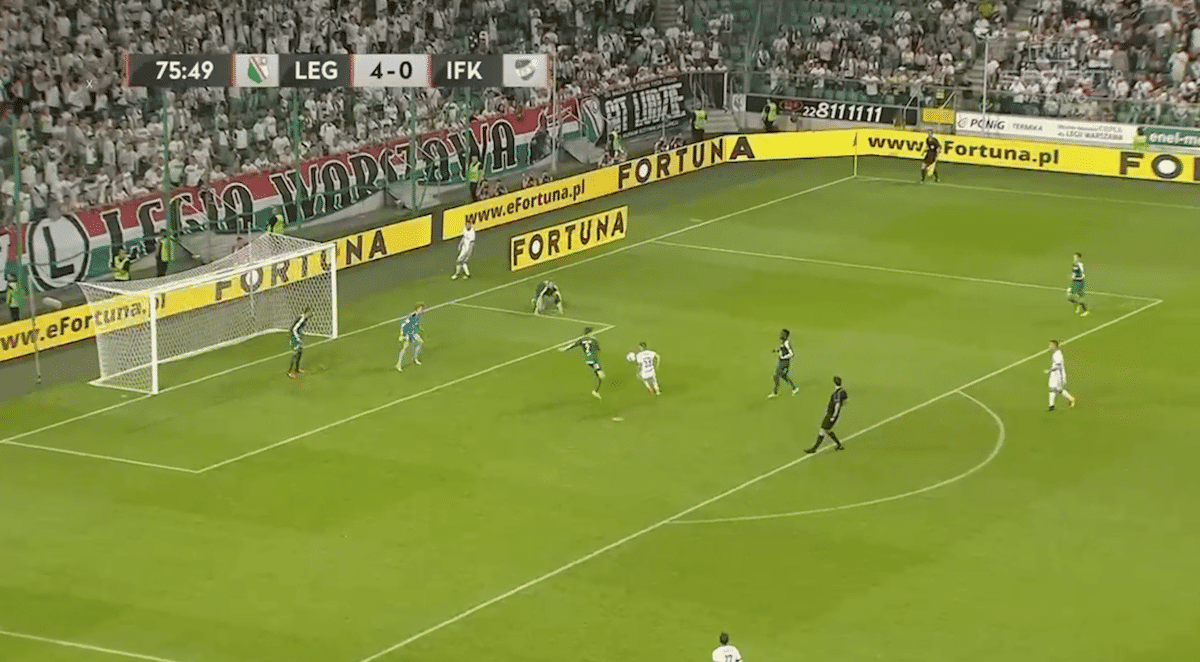 Making the most of the limited amount of space he's been afforded, he flicks the ball over his shoulder while on the turn. Getting it back into a central area. 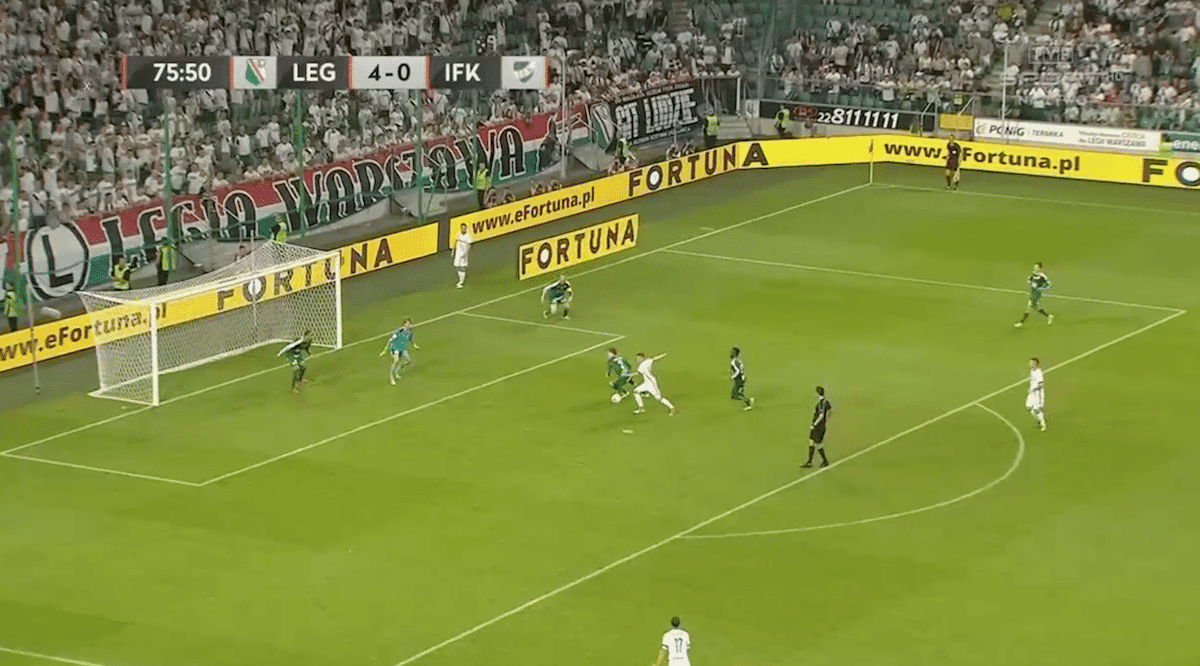 As it falls he's got space to get a shot away on his stronger left foot having carved the space out superbly. Unfortunately he blazes the ball over but what went before it was top draw. The composure in such situations will come with age.

Now you see his determination and how he is ideally suited to play in a transitional team. 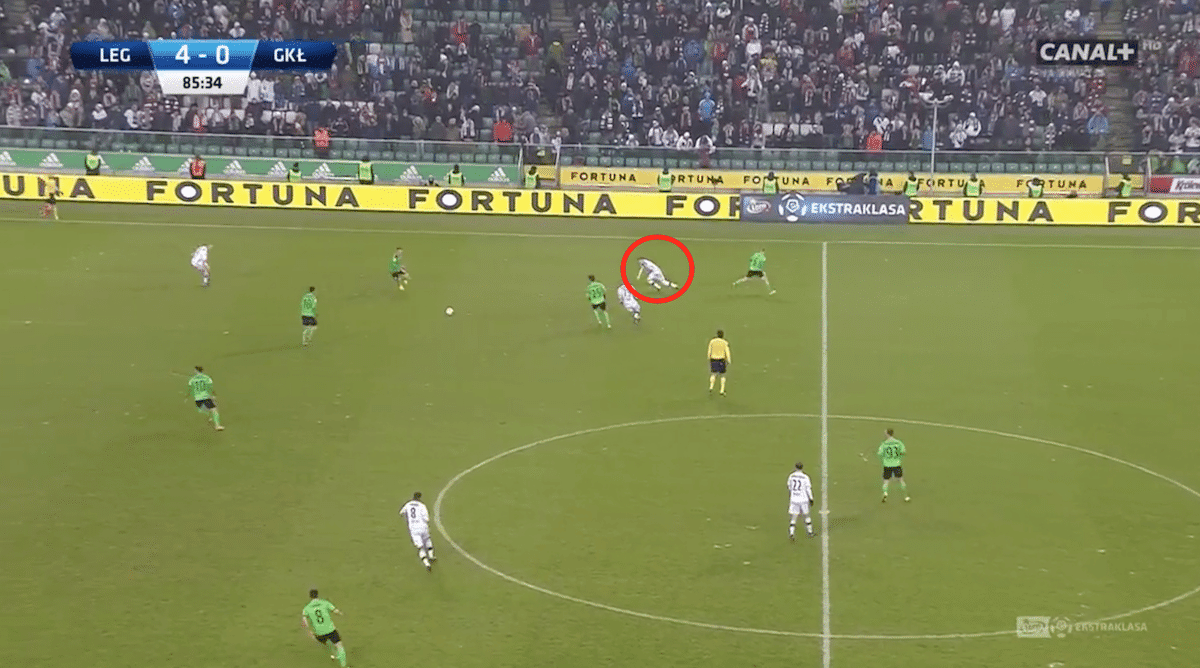 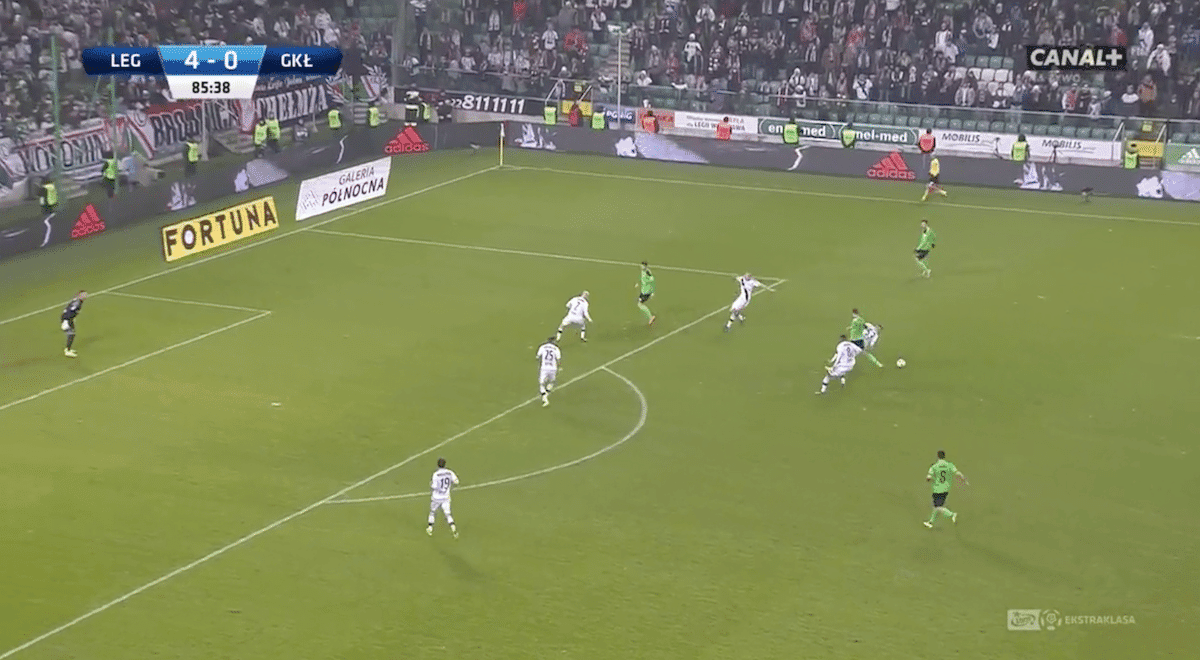 Szymański, circled in red, gives the ball to the opposition after a sloppy pass. He sets out to win possession back and tracks the man to near the edge of his own area. He doesn't dive in, tackle from behind or pull the man back, but instead positions himself to pinch the ball back and kill dead the attack. 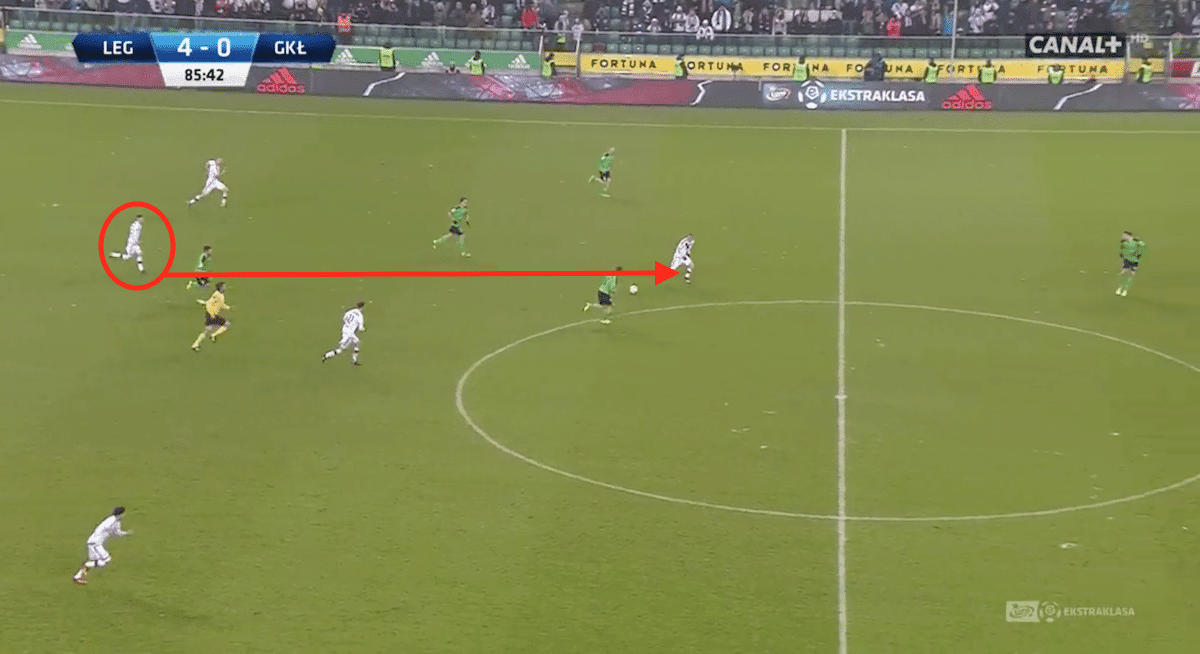 He then carries the ball forward into space before threading it through to his teammate. This looks simple and easy, but he's taken on the responsibility to not only win the ball back but to get his team onto the attack.

Many in that situation play a simple pass and it gives the opposition time to get back into their shape. Szymański, however, looks to make the most of them being out of position and plays a progressive pass between the staggered midfield line.

He may not be a world beater anytime soon but it's the sort of signing the owners, Fenway Sports Group, like to make.

Players with clear potential before they've made that next move and cost tens of millions more in a couple of years. It would also give Klopp the chance to forge an ideal midfielder for his system and remind the world again why he's considered to be one of the best developers of talent.