For the best part of a year, Everton were forced to make do without their captain, Séamus Coleman.

In January, Coleman finally returned to action and has duly made up for lost time in the three months since, being instantly reinstalled as the first-choice right-back.

Everton have won six out of the ten league games since Coleman's return, with the 29-year-old looking increasingly comfortable back in the heat of Premier League battle as the season has progressed.

In the 2-0 win over Huddersfield Town on Saturday Coleman was superb, successfully landing six tackles from six attempted, making two blocks, five clearances and managing 78 touches, more than any other Everton player.

He was also typically positive in possession, completing two out of three dribbles. The Irishman should have capped a fine day's work with a goal, though, spurning a massive opportunity when he fired a point-blank effort straight at Jonas Lössl.

While that was disappointing, Coleman has pretty much picked up where he left off prior to his injury. The nature of his injury clearly hasn't dimmed his enthusiasm for getting forward as he is completing more take-ons on average compared to last season, with 2.1 to 1.2.

It's also interesting to note that he is winning more aerial duels this season with 1.26 per 90, perhaps an indicator of how his athleticism and leap remain intact despite such a serious injury.

He is also making more forward passes (15.89) in an illustration of how his return has helped inject some impetus into Everton's attacks.

Generally speaking, Coleman's stats from last season are more impressive. His passing accuracy was higher at 77.9 per cent, he was making more tackles with 2.09 per 90 and was also managing more touches in the opposition box, with 2.17 per 90 compared to this season's 1.26. 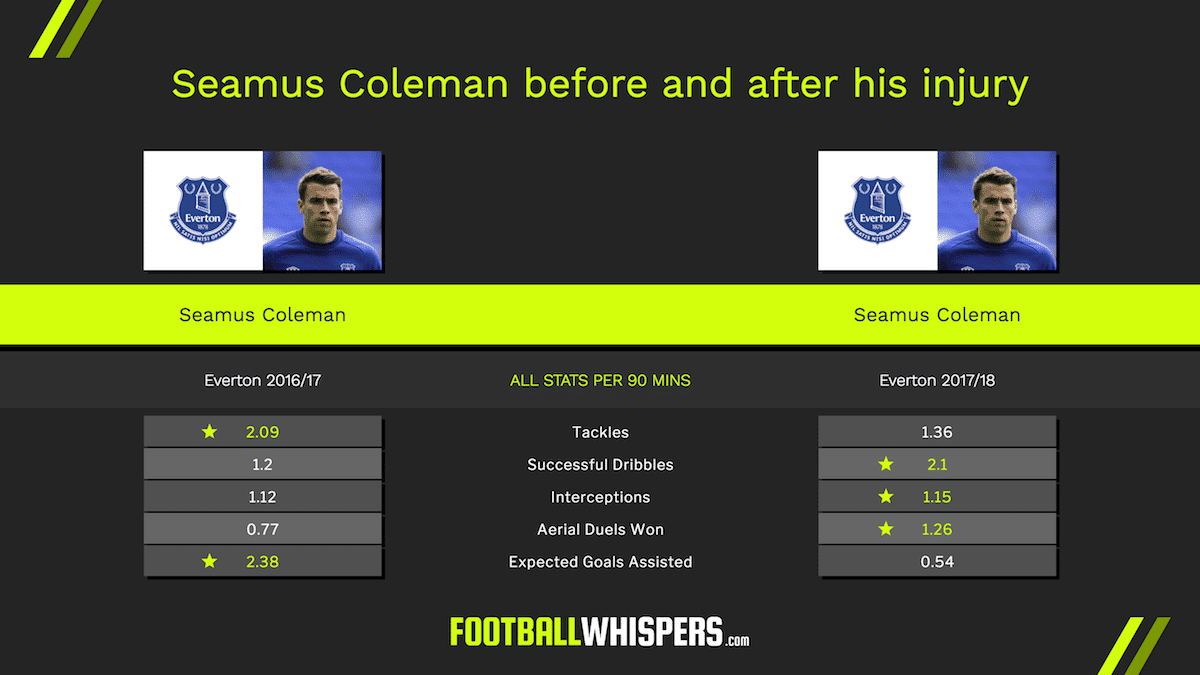 Some of that is down to how Everton play under Allardyce. Whereas they attempted to control games under Ronald Koeman, Allardyce often has the Toffees sitting very deep in games, particularly against top-six sides.

However, while Coleman still gets himself fully back up to speed, he has made some crucial contributions. For example, his stoppage-time headed clearance to deny Newcastle United a certain goal made sure of three points for his side and will go down as one of the more heroic pieces of defending this season.

While only one instance of good defending, it was a telling snapshot of what Coleman brings to this Everton side: courage, class and commitment.

With Ireland not participating in the World Cup, Coleman will have the opportunity to get a full pre-season under his belt, which should enable him to come back next season even fitter and stronger.