Last summer, Everton addressed their left-back issue, signing Lucas Digne from Barcelona as a long-term successor to Leighton Baines. Still an important voice in the dressing room, Baines is 34 and no longer the rampaging full-back of his younger years.

Now, having bolstered the left side of defence, the Toffees may start thinking about doing the same on the opposite side.

Séamus Coleman, another long-serving Evertonian, may not have reached Baines' age yet – the Irishman turned 30 in October – but the club captain's performances of late have been a cause for concern among supporters.

Ahead of the visit of Wolves to Goodison Park last week, the home fans unfurled a banner thanking Coleman for ten years of service. He has proved to be one of the finest pieces of transfer business in recent years, signed from Sligo Rovers for just £60,000.

In return, Everton have received almost 300 appearances from him, with Coleman pouring his heart and soul into each minute. But while his passion remains undimmed his pace has clearly been blunted, with many pointing to Neil Taylor's horror tackle that ruled him out of action for a year as a turning point in his career.

In recent weeks, though, even Coleman would admit to having allowed a slip in standards.

He struggled in the defeat at Southampton, was found wanting in the humbling FA Cup exit at Millwall and endured a difficult time up against the combination of Jonny Otto and Diogo Jota as Wolves ran out 3-1 winners at Goodison Park last weekend.

Marco Silva's confidence in his captain has been shaken, with the Portuguese coach preferring the inexperienced Jonjoe Kenny for the visit of Manchester City to Merseyside on Wednesday night.

It felt significant – and the data certainly paints a bleak picture of Coleman's reject trajectory.

The biggest change is dribbling. Last season, he was completing 2.17 take-ons per game whereas this term that has dropped to 0.72, a telling indicator that Coleman's confidence is in short supply, no longer able to beat his man in the manner which marked him out of as one of the division's most adventurous full-backs in his pomp. 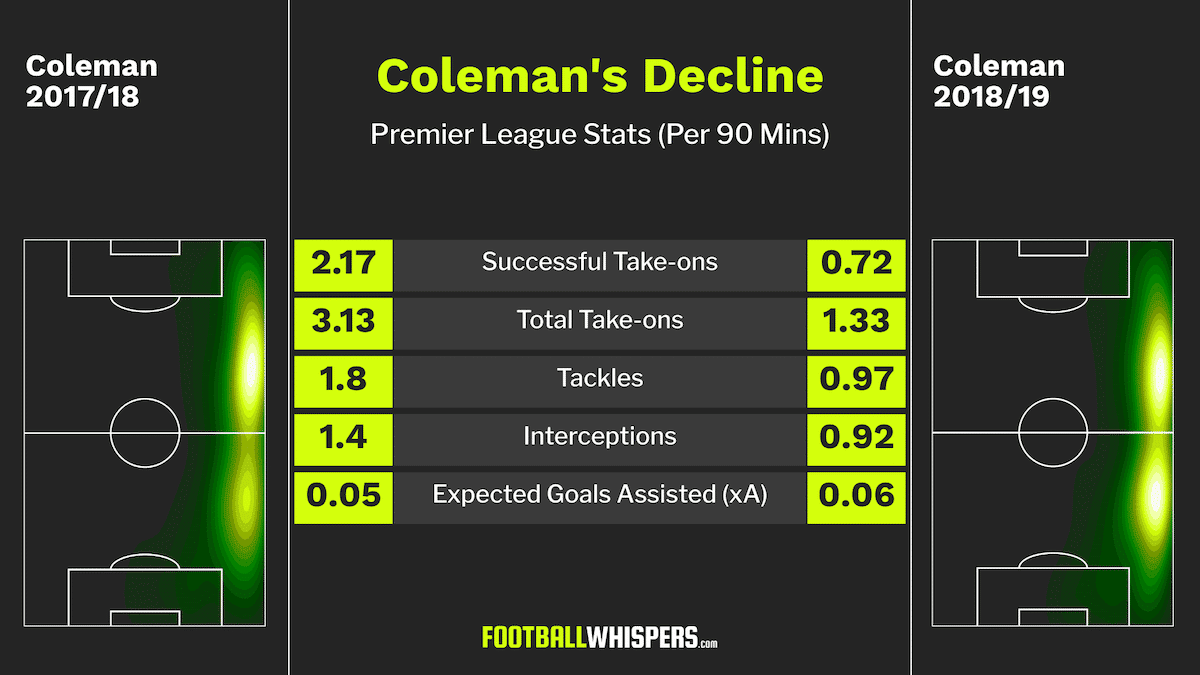 Coleman is also landing fewer tackles and attempting fewer forward passes and while his expected goals assisted has upped ever-so-slightly from 0.05 to 0.06 per 90, it pales in comparison to the 0.13 of Wolves' Matt Doherty, Coleman's long-term replacement in the Ireland set-up.

Coleman came back from the depths of despair which accompanied his broken leg, so he will certainly not give up his place at Everton without a fight.

He is made of stern stuff – Donegal men tend to be – but he faces an uphill struggle convincing Silva that he should be the club's first-choice right-back moving forward.