It wasn’t a secret for long. Brighton and Hove Albion have outed themselves as one of the shrewdest clubs in the transfer market with the business they’ve been involved in since winning promotion to the Premier League last season.

José Izquierdo, Pascal Groß, Mat Ryan and Davy Pröpper have all impressed for the Seagulls, helping them to all but secure a second successive season in the English top flight, having arrived in the summer for a combined £32million, if fees reported by the press are accurate.

Club-record signing Jürgen Locadia has been used sparingly since his move in January but the signs there are that he'll be a real handful when he's properly bedded in. Chris Hughton and the recruitment team at the Amex have shown great skill in identifying talent without breaking the bank in a market that's been grossly inflated since Neymar's world-record move to Paris Saint-Germain.

It appears as though it's going to continue on into the summer, if reports are to be believed. Italian media outlet Calciomercato claim Brighton are once again in for Raphael Dwamena, with the Premier League club vying with Napoli and Shakhtar Donetsk for the 22-year-old's signature.

Yes, the same Dwamena who failed a medical with the club last summer. Brighton had agreed an £8million fee with is club, FC Zürich, before they pulled the plug. No reason was given and the club released a statement: “Brighton & Hove Albion have withdrawn from the potential transfer of Raphael Dwamena, after the player failed the club's medical.

“The club would like to wish Raphael the very best for the future, as he returns to FC Zürich.”

It appeared as though the book was firmly shut on that move, especially with the club going out and signing Locadia. But fresh reports suggest otherwise. Could the Seagulls still be interested in the Ghana international?

Why Brighton should revisit their interest in Dwamena

On this season's form alone, they should be. He's found the net on seven occasions in the Swiss league – only nine players have managed to score more goals this term. He's completing 1.54 dribbles per 90 minutes, which puts him 18th when comparing him to other attackers in the league.

The left-footed right-winger is a force of nature when he gets going. He gobbles up the ground with his electric pace and there are shades of Thierry Henry to his play, especially when he glides in from the flank and opens up his body to curl the ball past the keeper.

Dwamena's primary position is as a central forward but he can also operate on either flank. A lot of the time for Zürich this season he's played on the right of a three. He's still a bit too raw to lead the line for Hughton's men but he could supplement Locadia – who looks set to play more of a starring role in attack in place of 34-year-old Glenn Murray.

It means he would be vying with Anthony Knockaert and Izquierdo for a starting role in Hughton's XI. The latter has really caught the eye over recent weeks and his second season in the Premier League could be even better. Knockaert, however, has struggled to recapture the form he showed during Brighton's promotion campaign. 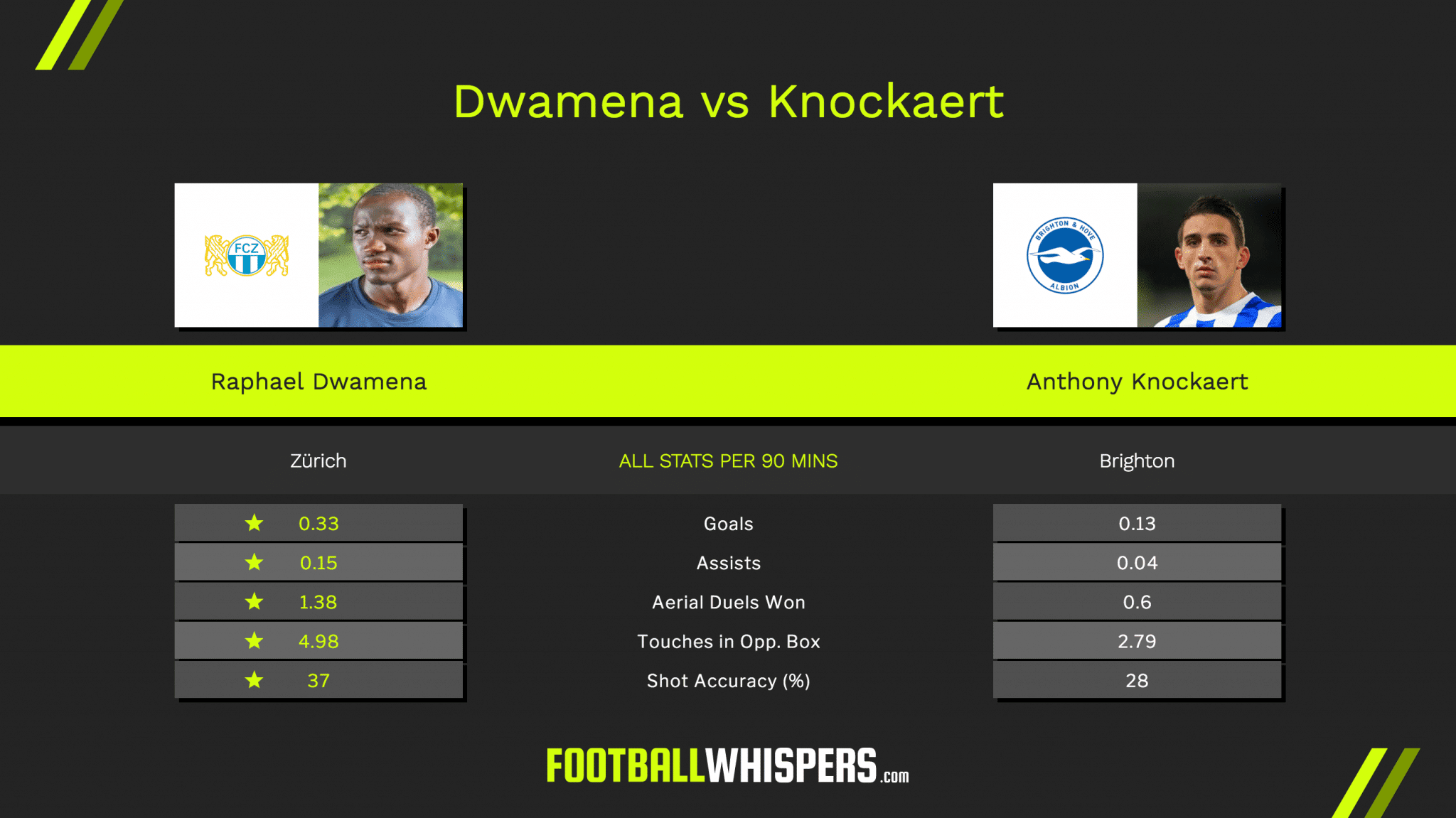 The 26-year-old has been involved in just four goals this term, 19 fewer than he managed last season. His output has dwindled, and with it his importance to Hughton and the team has, sadly, lessened.

Dwamena could displace the Brighton No.11 on the right-hand side. In terms of stats this season, the Zurich man has a better goals and assists per 90 record (0.48 to 0.17), he's winning more aerial duels and has two more touches in the opposition's penalty area. The Frenchman also loses out when comparing shot accuracy – 28 per cent to 37.

These stats are influenced by the teams they play in as well as the standard of opposition they face. There's no guarantee Dwamena would be able to replicate such form in the Premier League. But the fact he's such a wildcard is what makes him and intriguing proposition.

His goals are transferable and that's what is important when analysing a forward player. The chances they're getting need to be sustainable. For example, a player scoring a high number of goals from ridiculous positions could just be in a purple patch which then fizzles out.  This isn't the case with Dwamena, as shown in one of his goals below. 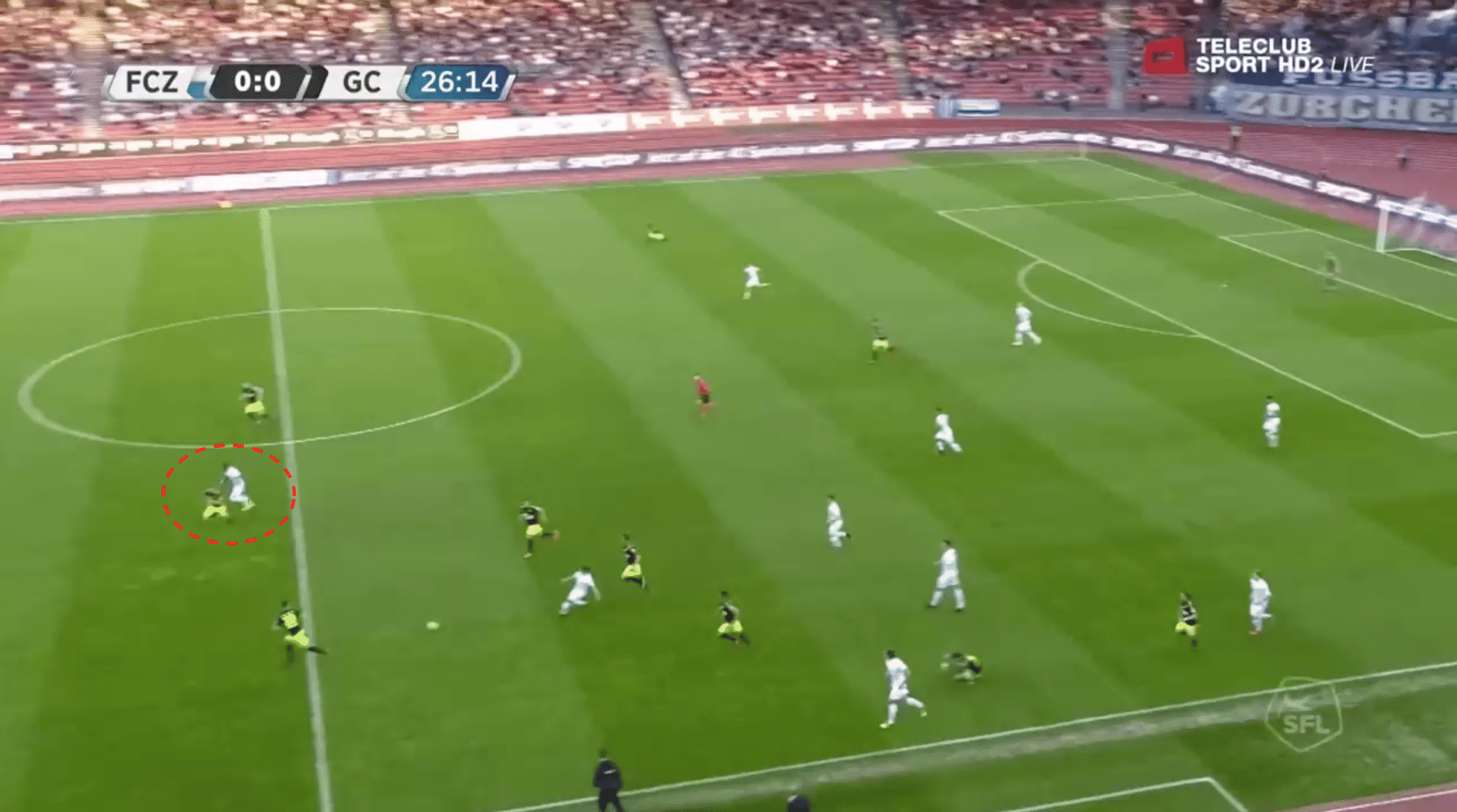 Circled in a central position, the versatile forward keeps himself onside, knowing he has the pace to beat most defenders, even if they have a head start on him. He's on his bike as soon as the ball is released by his team-mate. He blazes past the player closest to him, showing great intelligence to cut across and keep his body between the player and the ball.

It's not visible in pictures but Dwamena slows down to keep the ball under his control but is still quick enough to stay ahead of the man chasing him. 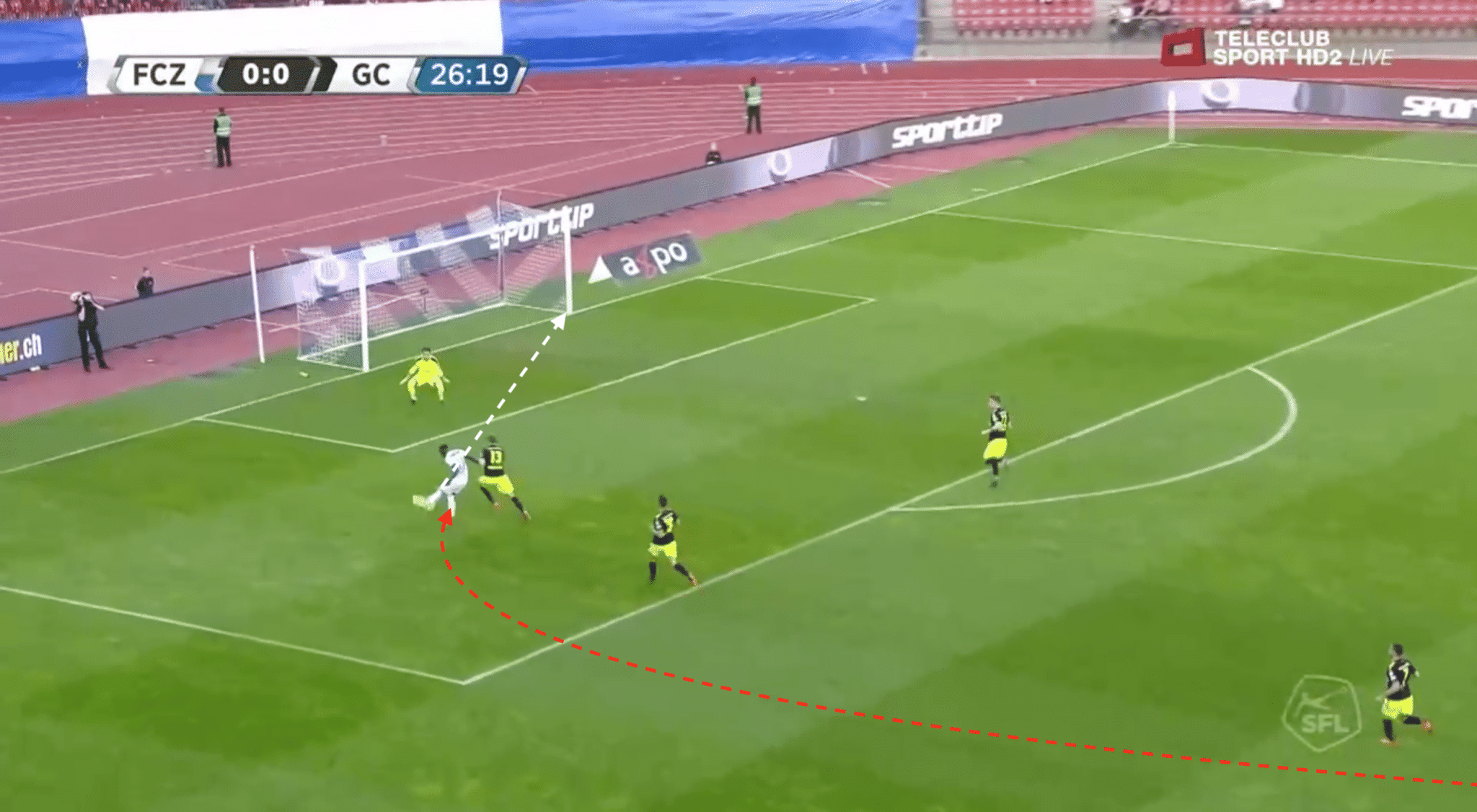 He continues to hold off the player, knowing he can go down to win a penalty if there's enough contact, all while getting closer to the goal. The Zürich No.11 then calmly strokes the ball past the goalkeeper and into the bottom corner. He's a threat on the counter-attack and he couldn't half do some damage in the Premier League with such raw speed.

His play needs to be refined and there's a lot he can work on when in possession, because he doesn't excel when in tight spaces. But that comes with experience as well as practice. Learning from the likes of Locadia and Izquierdo on a daily basis would no doubt help him improve. For the rumoured £8million, it's a no-brainer and could be a deal Brighton look back on in a couple of years as yet another masterstroke on their part.