Tonight, Celtic welcome Rosenborg to Glasgow for a Champions League third qualifying round first leg clash. Brendan Rodgers’ side are hoping to build on an exceptional domestic campaign in 2016/17 by progressing further in Europe this season, and the upcoming clash is crucial in this respect.

The opposition are top of the Norwegian league, sitting five points clear of Sarpsborg, and on course to be crowned champions for a third consecutive year. To get to this stage they knocked out Irish champions Dundalk, sealing their progress with a 2-1 extra time win at home.

“He [Deila] is more a fan of Celtic than Rosenborg. I am not trusting everything he said to me. [The chat] was more about Celtic Park and what we could expect. That's what he could tell me about. [The favourite] has to be Celtic.”

The two teams have met before in European competition on four occasions, with Celtic winning three of those matches. The Norwegian outfit came out on top in the most recent meeting, but that was back in 2001. Former Bhoy Harald Brattbakk scored both goals in a 2-0 win that evening.

Rodgers and his staff will have done their homework ahead of the tie, but very few fans will be fully aware of precisely what sort of threat Rosenborg pose. In this scouting report, we detail their key players, style of play, strengths and weaknesses.

Ingebrigtsen’s side are not entirely dissimilar to Celtic in terms of their attacking setup, however they lack the fluidity and certainty of the Scottish champions in possession. Their basic shape is a 4-3-3, though this morphs depending on the phase of play they are in.

Offensively, Rosenborg’s 4-3-3 becomes more of a 2-3-5. The full-backs – usually Vegar Hedenstad and Birger Meling – push up to join the defensive midfielder, Anders Konradsen ahead of the two centre-backs. The two central midfielders, Mike Jensen and Fredrik Midtsjo, then push up to play on the same line as the wide men, with Nicklas Bendtner leading the attack.

As seen in the below graphic, Bendtner is not tasked with remaining the focal point. Instead, he often drops off and comes deep to receive passes directly from the central defenders, who look to play through the opposition. 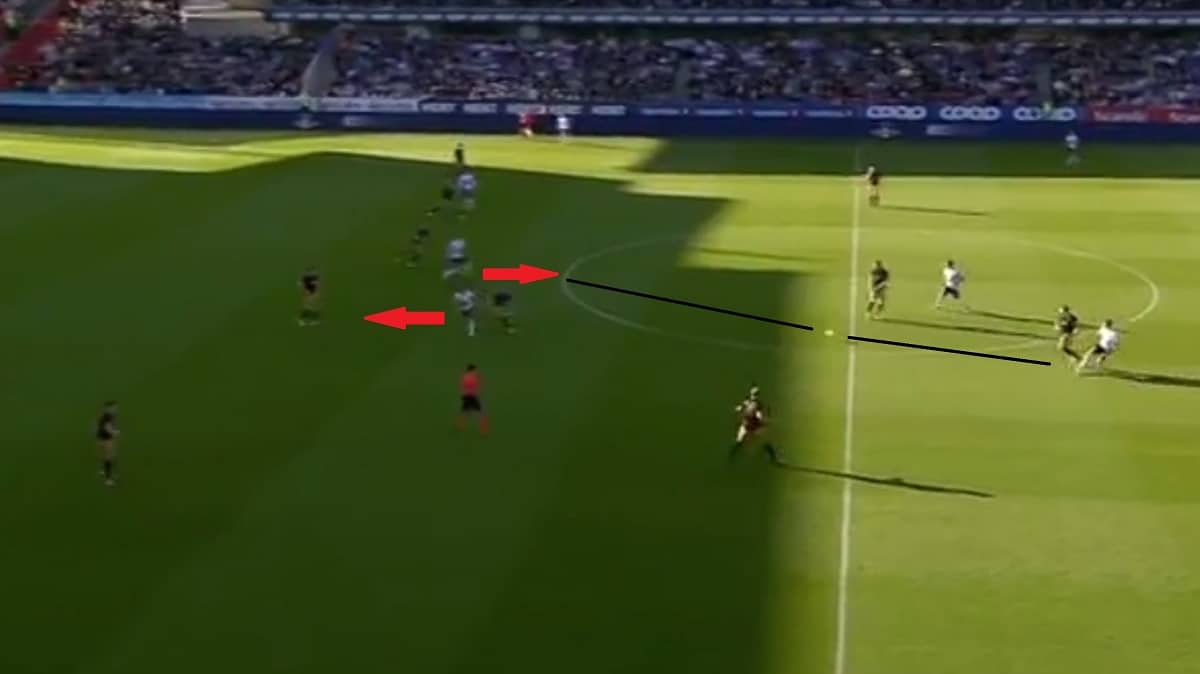 The Danish centre-forward’s movement is designed to drag opposition centre-backs out of position, creating space behind to be exploited. This is coupled with third man runs from Jensen, Midtsjo and the wingers, Pål André Helland and Milan Jevtović, who look to take advantage of the space created.

The 2-3-5 shape and the aforementioned movement and direct passes are integral to Rosenborg’s attacking play, as suggested by the statistics. Only one team in the Norwegian top tier attacks through the middle more than their 26 per cent, and only two teams play more ‘long’ balls per game.

However, Ingebrigtsen’s side are not reliant on having the ball. Indeed, despite topping their league, three other teams average more possession than their 53.6 per cent.

Without the ball, they tend to form a 4-5-1 shape with a deep block and a passive, man-oriented approach to pressing. They allow their opponents to build up without really applying pressure until around the halfway line. This setup is shown in the below still. 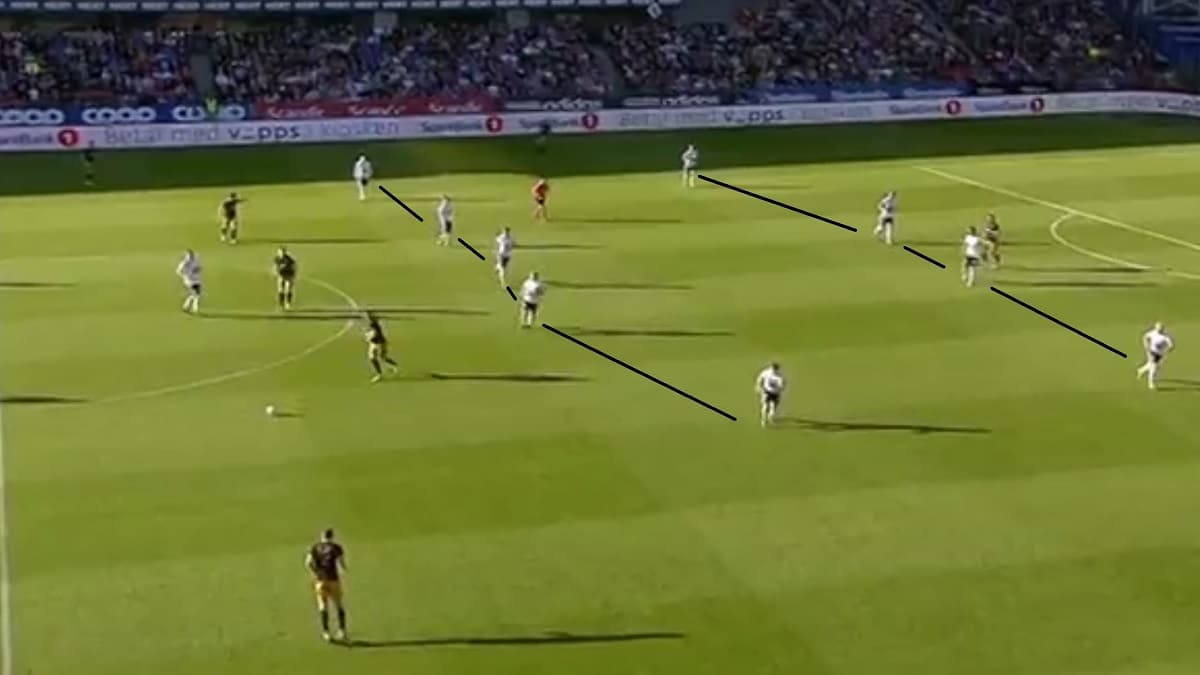 When it comes to goals scored, Bendtner’s track record since joining Rosenborg isn’t particularly impressive – he has hit just six in 16 league outings, and six in 20 overall.

However, with his movement and link-up play, he is important to the way his team progresses the ball into the final third. 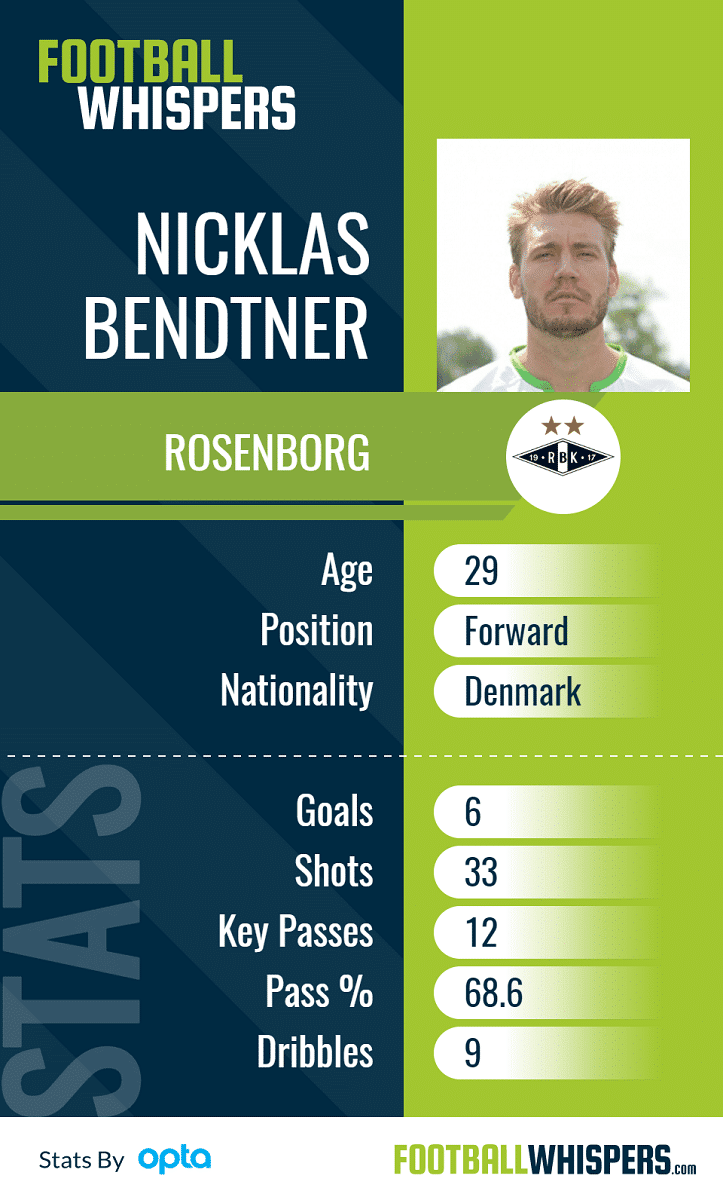 He is undoubtedly the most widely recognised member of Ingebrigtsen’s line-up, but club captain and midfield driving force Jensen is arguably even more integral. With three caps for Denmark, the 29-year-old has refined technique and is an experienced, intelligent operator.

If he provides the substance, midfield partner Midtsjo brings the style. The 23-year-old Norway international is a playmaker capable of flashy touches and short bursts of speed. He is a diminutive trickster who thrives in tight spaces and has a knack for finding a pass through the least obvious of gaps.

In and around the final third, Rosenborg will present a genuine danger to Celtic with their cunning off-ball movements and runs from deep. Their front five are a mobile and technically gifted crop capable of opening up defences in a variety of ways.

Rodgers will have to ensure his defence’s marking is absolutely spot on. Bendtner must be tracked but, at the same time, the shape must be compact and organised to negate the runs of Jensen and co.

There are also weaknesses for Celtic to exploit, however. For instance, while Rosenborg are a threat when in the final third, they are not quite so effective at getting there in the first place. Their defenders are not convincing on the ball at all times, an issue only extrapolated by the distance between the lines.

When the central midfielders push up to play off of Bendtner, this can lead to huge gaps between the Norwegians’ defensive and attacking lines. In these situations, the centre-backs lack of composure can be exposed and passes can be cut out.

If Celtic press Rosenborg well in the early stages of their build up they will more than likely create dangerous counter-attacking opportunities for the pacey Scott Sinclair to make use of.