There is a certain irony in the fact that for all their exciting, dynamic and enthralling attacking play Tottenham Hotspur have been linked with full-backs since the season ended with Hoffenheim's Jeremy Toljan the latest.

That is because Kyle Walker has joined Manchester City and briefly became the world's most expensive defender after completing a £45million switch to the Etihad Stadium.

Kieran Trippier's impressive displays in the final few months of last season have seen the former Burnley and Manchester City defender handed a new contract at Spurs, suggesting the England international will be Mauricio Pochettino's first-choice right-back next season.

According to The Sun, the German Under-21 international is close to joining the north Londoners. We've run the rule over the Tottenham transfer target.

Born in Stuttgart to a Croatian mother and American father, Toljan began his career with local sides SV Grün-Weiss Sommerrain and TSV Steinhaldenfeld before moving to Stuttgarter Kickers – the former club of Spurs legend Jurgen Klinsmann – in 2008. From there he progressed to Stuttgart and, finally, Hoffenheim in 2011.

In his first season with the village club Toljan was limited to a couple of appearances on the bench for the second team. But in 2012/13 he broke into the side and turned out regularly for Die Kraichgauer in the Under-19 Bundesliga too.

Even though Hoffenheim were far from safe in 16th, Toljan got a taste of first-team action towards the end of the 2012/13 campaign. He was named as a substitute for three of the final four games of the season but did not get on as relegation was avoided with a 5-1 play-off win over FC Kaiserslautern.

Eight weeks into the new season, Toljan was handed his chance away at Mainz. Pitched in at left-back by Markus Gisdol, Hoffenheim went 2-0 up – with current Liverpool forward Roberto Firmino on target – only to concede twice in the final eight minutes and draw.

It was a tough introduction to life in the Bundesliga but Toljan has not looked back. He finished his breakthrough campaign with ten first-team appearances and was an unused substitute 21 times.

He has since become a regular for Hoffenheim, playing on either side of defence or in more advanced wing-back roles – ideal if he is to join Spurs at some point – and was part of the Germany squad which won silver at the 2016 Olympics in Rio.

A full German call-up seems a formality with Toljan turning down then-coach Klinsmann's offer to represent the USA – the country of his father's birth – in 2015. “He called me and asked whether I could imagine playing for the United States,” he said. “It was only a short conversation.”

And with good reason. Toljan was part of the Germany Under-21 squad as they won the Under-21 European Championships in Poland this summer, playing five times.

What would Toljan bring to Spurs?

Apart from having to fit into Pochettino's high-intensity, high-pressing game, anyone who replaces Walker at Wembley Stadium next season will need to play in a similar style to the buccaneering England full-back.

When Trippier comes into the side there is a clear difference in the style of the two players. While Walker tends to hare to the touchline and either cut back for someone in the penalty area or try to drive into the box, Trippier is content with finding the best angle to cross from and lofting the ball into the area – often from deeper positions.

Both approaches have their merit and Trippier, in particular, has been rightly lauded for his delivery from wide areas. If Pochettino wants a more like-for-like replacement for Walker, Toljan ticks that box with his willingness to drive forward, pace and directness.

In the image below Toljan demonstrates his off-the-ball movement as Hoffenheim attempt to break against Hertha Berlin. He makes is clear he is willing to break into the hosts' half.

The ball over the top is perfect and Toljan collects possession in the image below, driving into space and cutting back for the two Hoffenheim players forward in support. The cut-back is good but they contrive to squander a golden opportunity. 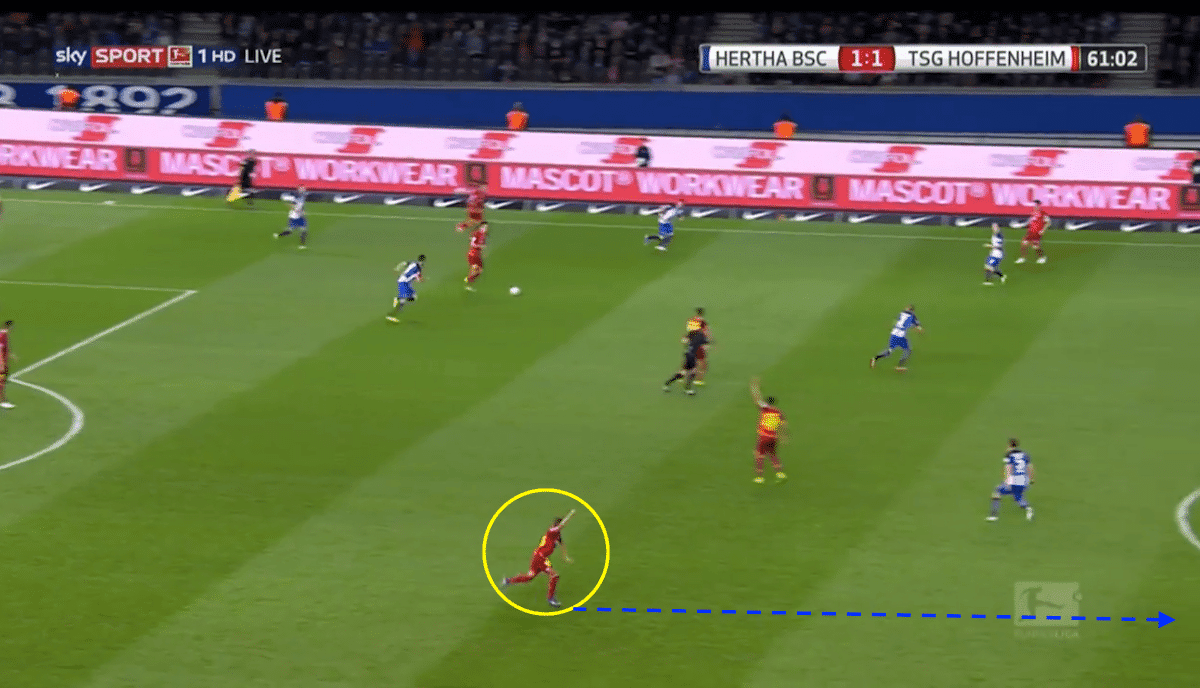 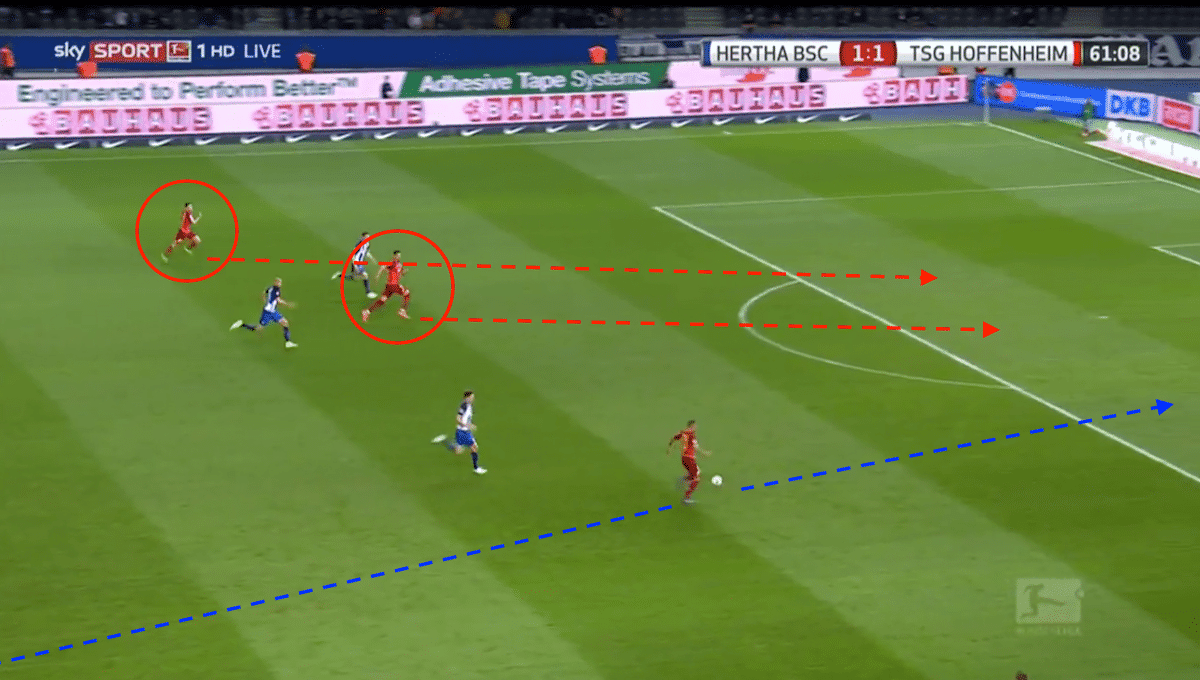 In the next image, taken against Köln, Toljan is on the left-hand side. But he shows no less commitment to getting forward and makes a superb run all the way from left wing-back to get forward and score Hoffenheim's second goal. 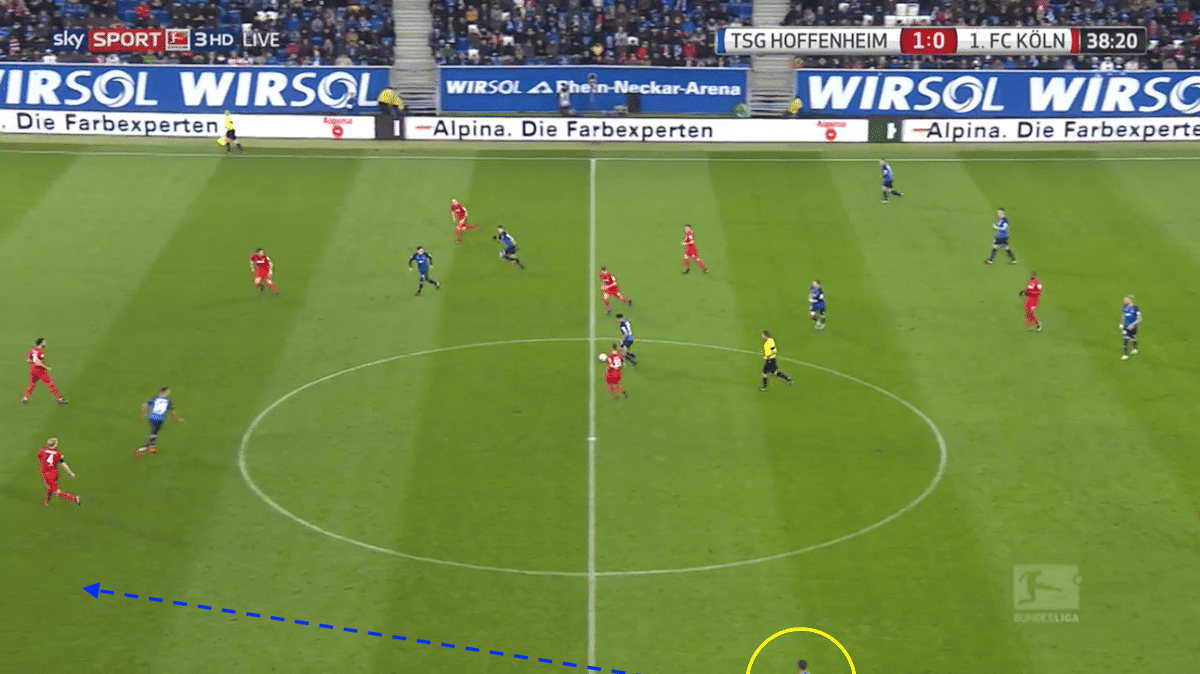 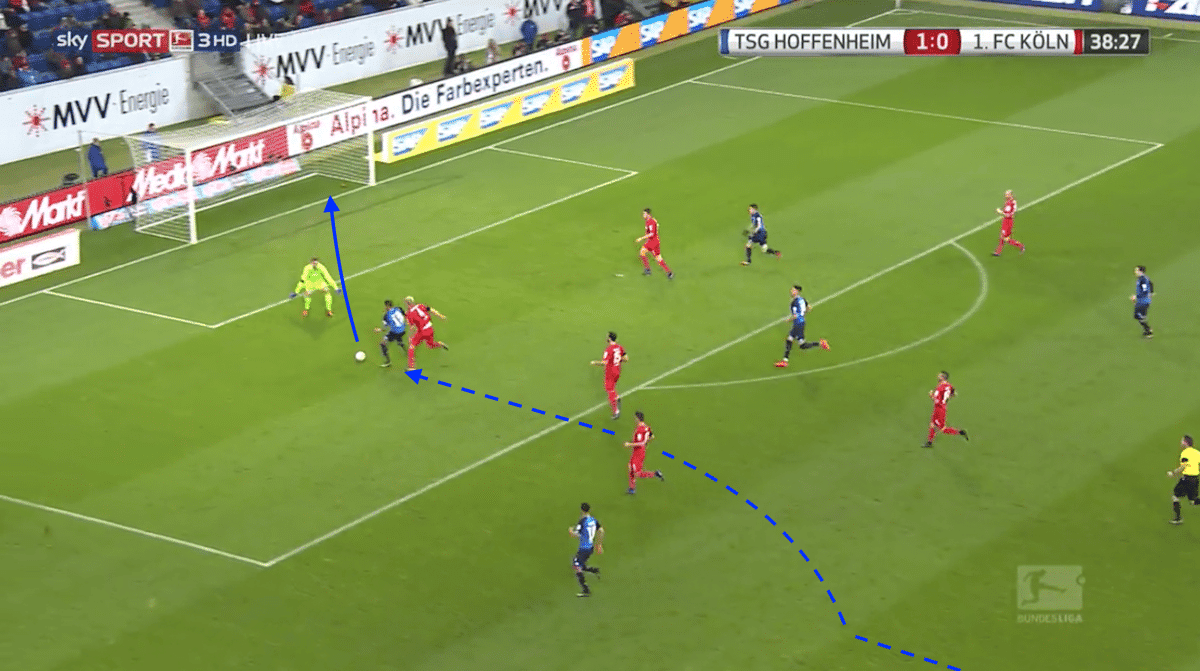 There is, however, work to do on the defensive side. Toljan is not as effective as Walker or Trippier when facing his own goal. He needs to improve his positioning and decision-making if he is to become an all-round full-back.

It is worth noting the Bundesliga side played almost exclusively in a 3-5-2 formation last season meaning Toljan had different responsibilities to Trippier, or the now departed Walker, with Pochettino using different systems.

Where would Toljan fit in at Spurs?

Everything appeared to hinge on whether the north Londoners could retain Walker or not. The former Sheffield United defender only played six Premier League games in the final three months of the season with Trippier clearly Pochettino's preferred option.

Now Walker has departed, a space has opened up and Spurs will need another player comfortable in the right wing-back role. However, owing to Levy's hardball tactics deals often go to the wire. Chelsea have previously been linked with Toljan and Tottenham won't be the only club after the German.