Ronald Koeman’s overhaul of the Everton squad is in full swing.

Jordan Pickford, Davy Klaassen and Henry Onyekuru have all arrived at Goodison Park while Sandro Ramírez looks like he will join, despite him being subject of Real Madrid transfer rumours in the Spanish press.

And it looks like the next Everton transfer target will be a defender. Back in May, Phil Jagielka implied his future at Everton was uncertain.

The 34-year-old finished the season in the Blues’ starting line-up but found himself on the bench for almost two months.

He told Sky Sports: “It is not really about me and what I hope.

“Obviously I will get time off with the rest of the lads and prepare myself to go back for preseason and see where the land lies.

“I am delighted to be here. I have been here a long time now. I have got at least one more year on my contract and I feel as though I have got a lot more football in me.

“It is up to me to come back in pre-season and prove to the manager that I am not too bad and hopefully I can stick around.”

Jagielka is reportedly a Sheffield United transfer target, but has played down talk of a return to his old club.

“If there was, obviously I wouldn't be coming on the radio and discussing it,” he said on talkSPORT.

“I’ve heard the rumours myself – had some texts – but as of yet there’s nothing in that.

“The main goal is to get back to pre-season as fit as I possibly can and go from there.”

While he’s not confirming anything, it doesn’t look like he will be definitely staying at Goodison Park, and it would be no surprise to see one, or more, centre-backs brought in by Koeman as he looks to build a squad capable of bettering last season’s seventh-placed finish.

And one of the names linked with a move is Las Palmas defender Mauricio Lemos.

Born in Uruguay, Lemos is just 21 but is already regarded as one of the most promising defenders in La Liga.

He came through the ranks in his native country at Defensor Sporting, where he made his debut in May 2014, aged just 18.

The centre-back made just nine appearances for the Uruguayan side, but made enough of an impression to make the move to a European league – signing for Russian side Rubin Kazan on a year-long loan deal in July 2015.

That was probably based on his impressive appearances for Uruguay’s Under-20 side. 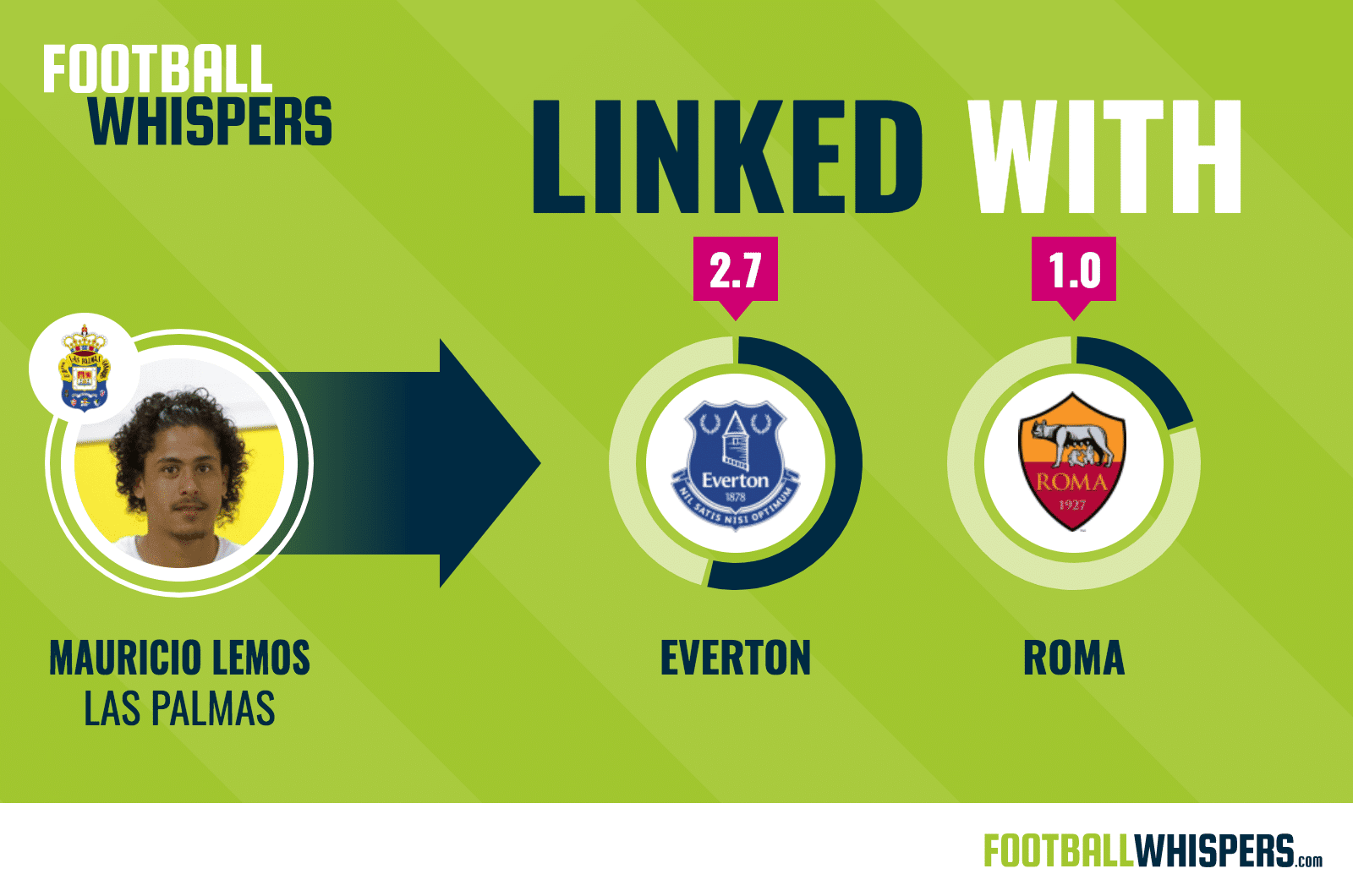 His deal at Rubin Kazan was made permanent on January 27, 2016 after just seven matches, but the next day he left the Russian side, joining Las Palmas on loan.

Lemos had failed to properly settle in Russia and making the move permanent just seemed to be so Rubin Kazan could make some money from his time there before he moved on.

He made 10 appearances in his half-season and was hugely impressive, even reportedly becoming a Barcelona transfer target.

“I spoke about it with my family and decided not to go to Barcelona,” he told La Repubblica.

“I felt it was for the best. Many players go due to the name of the club, but what are they going for?

“If I move to a big club like that one day, my intention is to be a regular.”

But he chose to make the move to Las Palmas permanent, but as the 2016/17 campaign began, it seemed as if he’d misjudged the situation completely.

Instead of being a reserve at Camp Nou, the 21-year-old found himself on the bench in the Canary Islands, making just six appearances – for a meagre total of 573 minutes – before Spanish football took its winter break.

But when action resumed in the New Year, Los Amarillos boss Quique Setién would finally begin to give Lemos regular playing time, a chance he seized with both hands.

Since being named in the starting XI for a 1-0 win over Sporting Gijón, he became a mainstay in the side, playing 23 games in total throughout the campaign and really looking like the player Barcelona were previously interested in.

Of course, the first thing you want from a defender is the ability to defend.

But when you watch Lemos, his comfortableness on the ball, combined with ability to cause the opposition an attacking threat catch your eye immediately.

At times Setién’s Las Palmas were the most beautiful side to watch in Spain last season, and Lemos underlined that completely.

His long-range passing ability will immediately catch your eye.

Give him a bit of time, and he’ll pick out an inch-perfect pass.

As you can see below against Athletic Club, Lemos picks a loose ball up by the touchline, under no pressure at all. 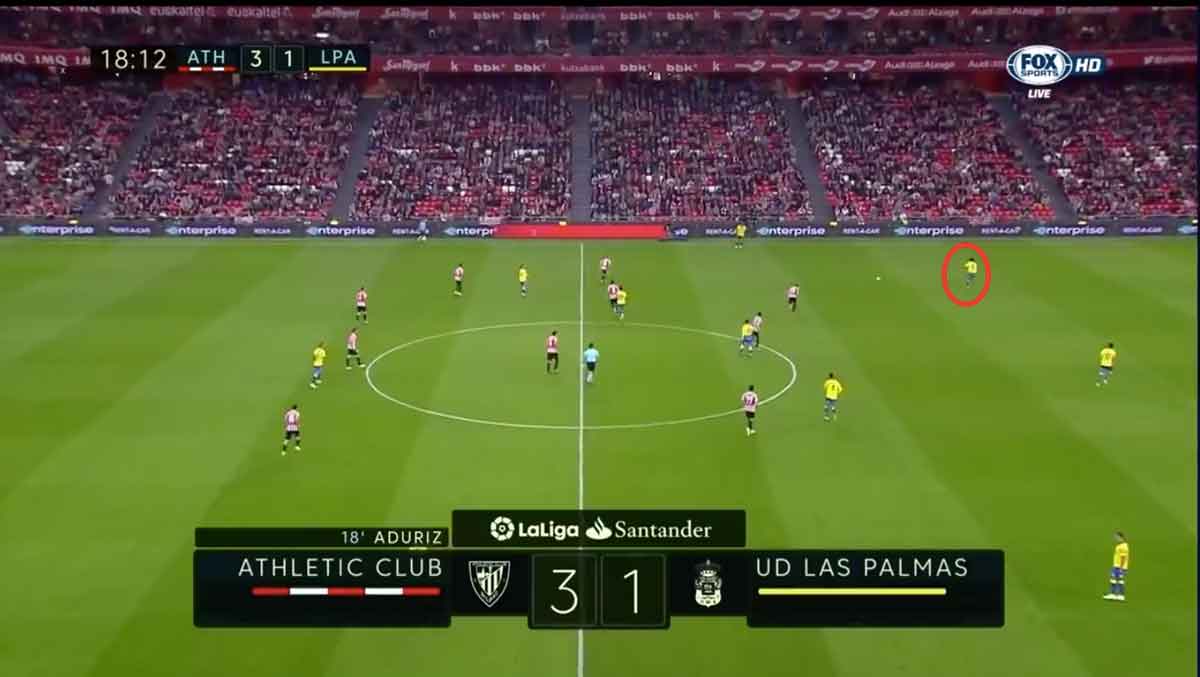 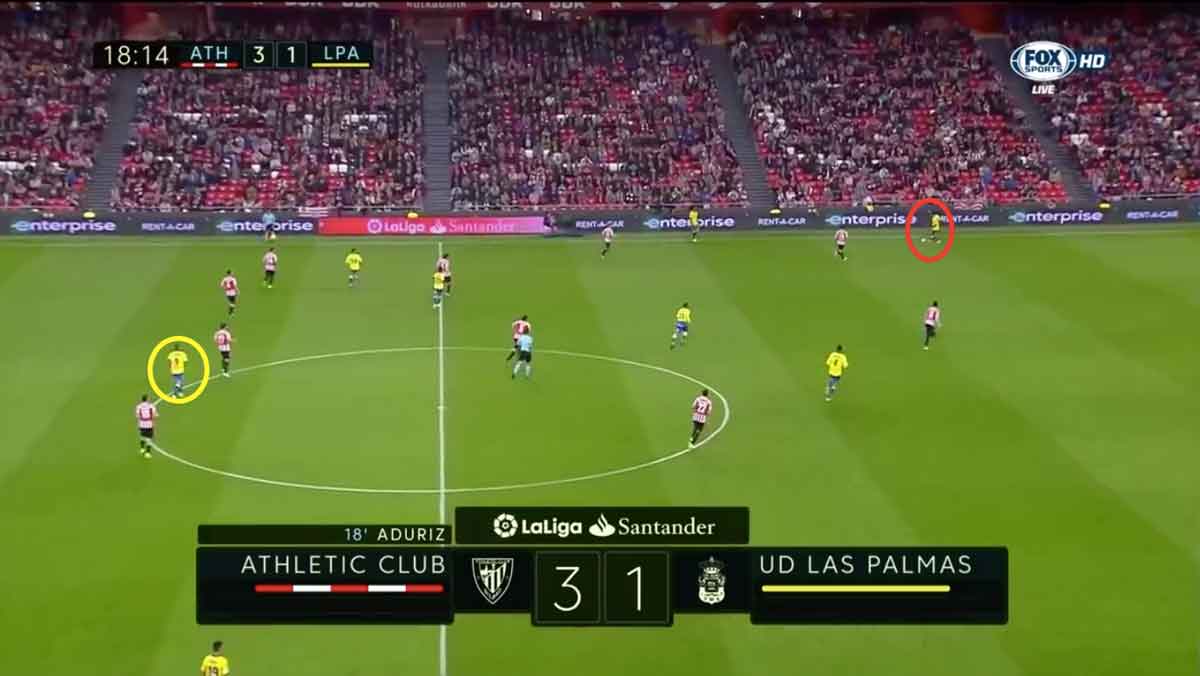 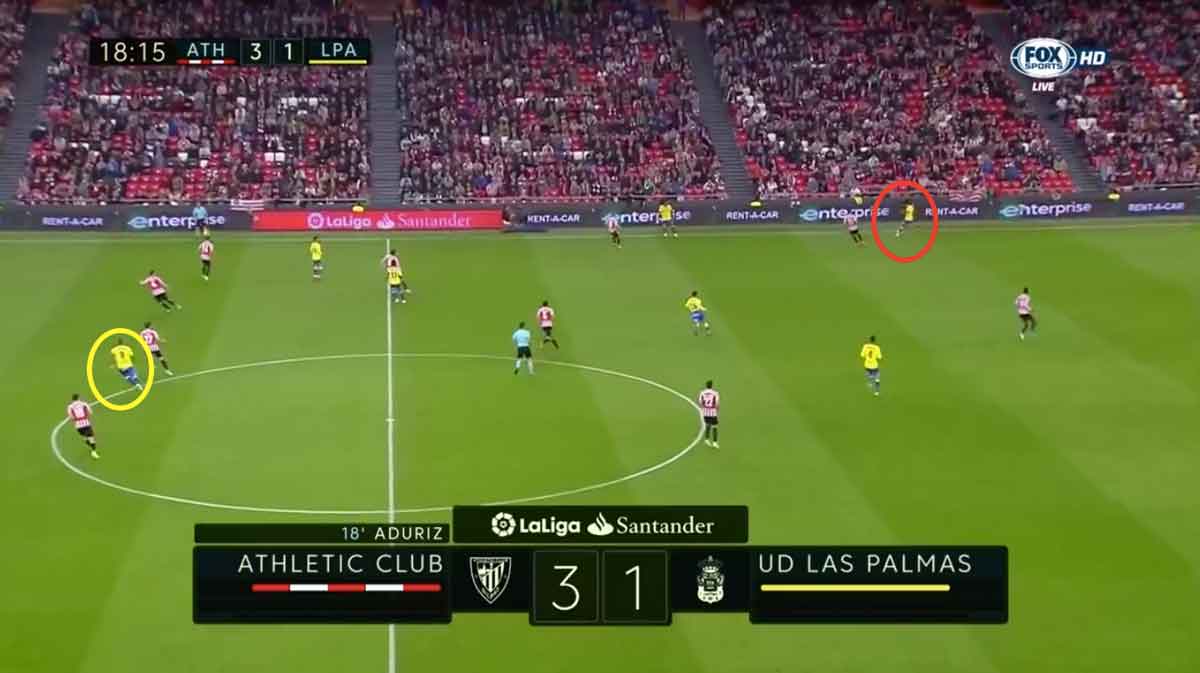 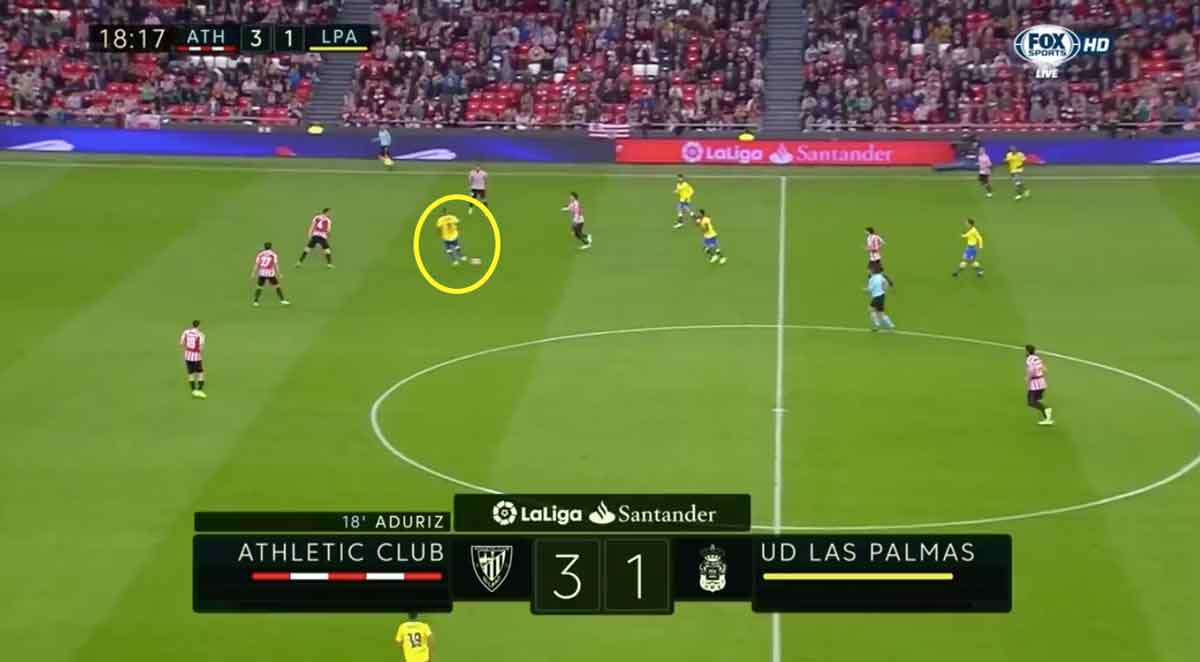 The defender (circled in red) looks straight away to find a team-mate – Marko Livaja (circled in yellow).

You would perhaps expect a long punt over the top, hoping that the centre-forward might get there ahead of his team-mates.

But instead, Lemos goes slightly shorter, making the most of the gap between the Athletic midfield and defence, allowing Livaja to back heel the ball to a team-mate and his side to start a meaningful attack in the opposition’s half.

And it’s the same against Villarreal below. 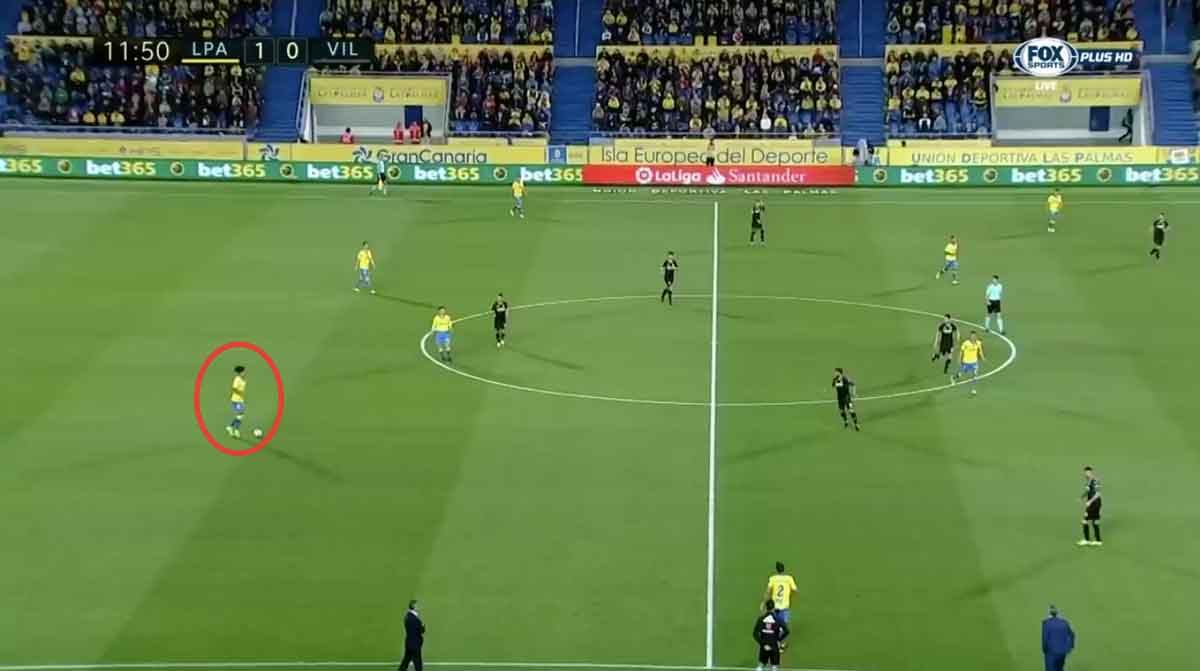 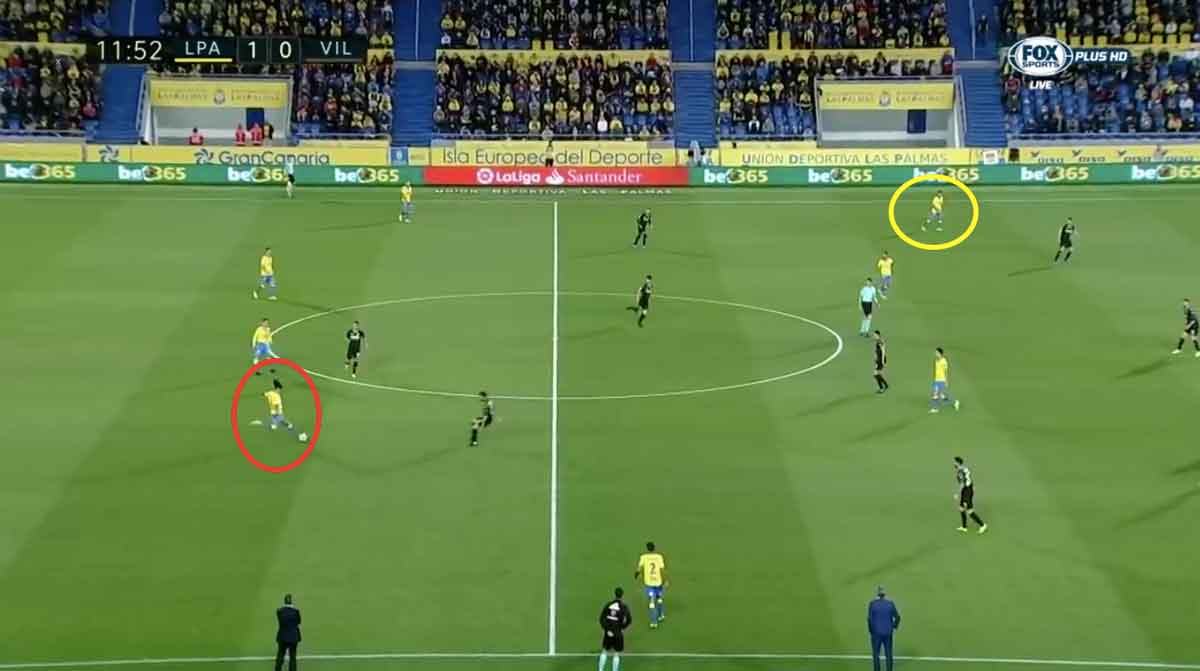 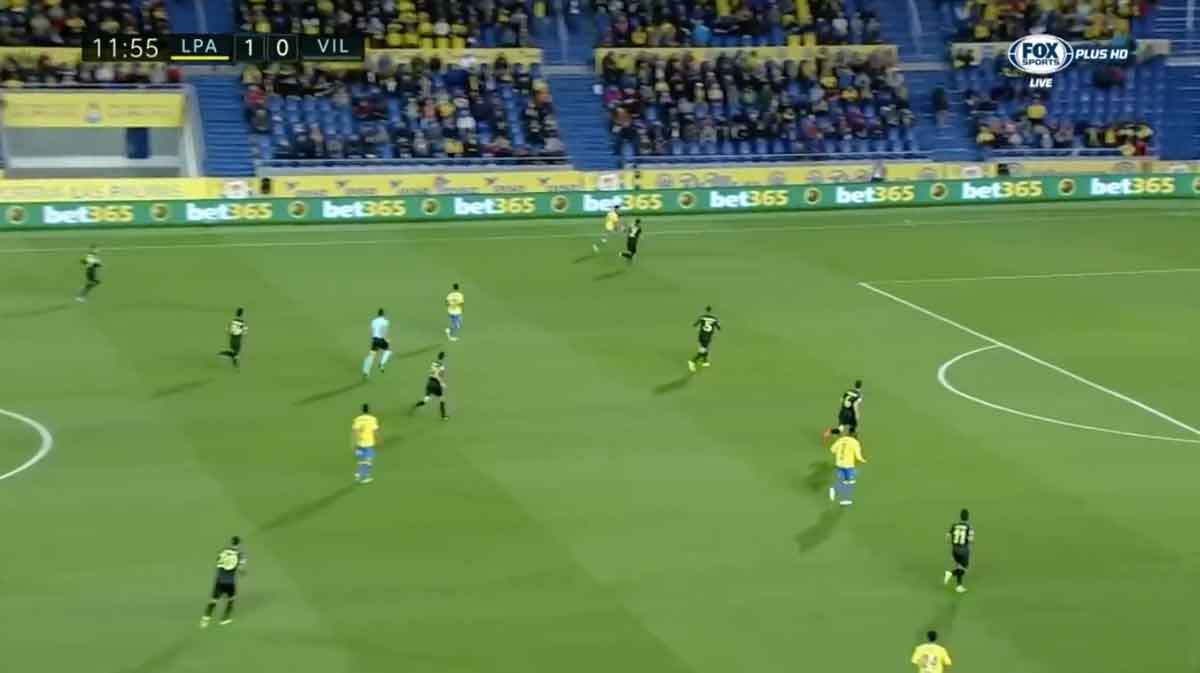 Lemos (circled in red) is given a lot of time when he gets the ball in his own half.

He takes a touch and spots his team-mate (circled in yellow) in space on the wing, picking out an inch-perfect pass that lands right on his feet, allowing him to take a touch and be in behind the defender.

As you can imagine, having accuracy like that means he’s dangerous from set pieces.

That’s not only if he’s the taker though – he can cause chaos in the opposition box and should have got more than his one headed goal than he got lost season, when he got on the end of a free-kick against Espanyol.

But he’s also a danger if you put him in shooting range.

His brilliant free-kick against Eibar, which you can see in the stills below, gave the keeper no chance whatsoever.

Any team would love to have a threat like that in their armoury. 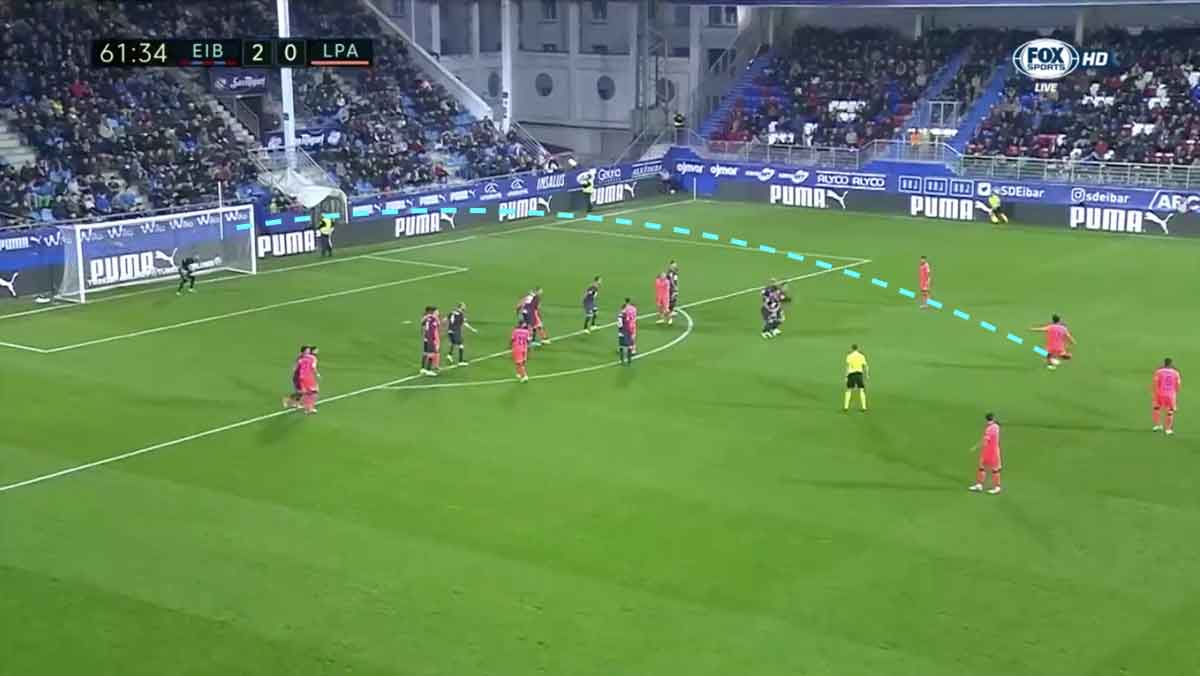 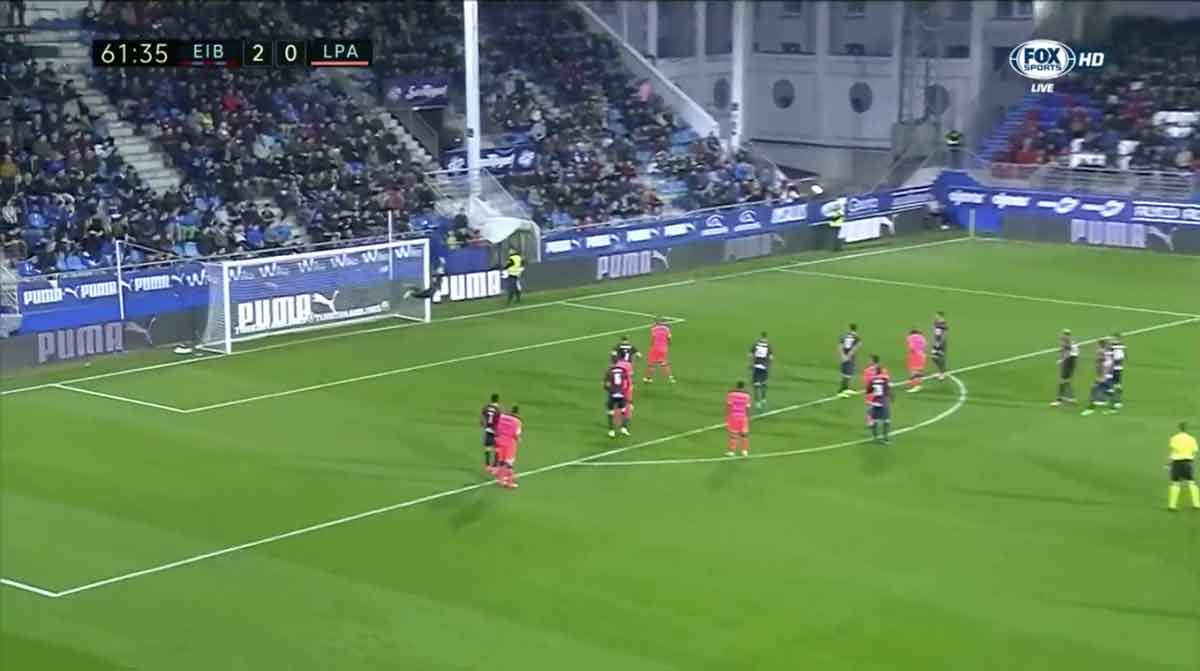 Uruguay have produced some very good defenders in recent years, such as Diego Godín or Diego Lugano, and Lemos is said to be influenced by them.

“He likes to be a leader,” his father Pablo Lemos told Mundo Deportivo.

“Mauricio is quiet but has a lot of personality on the pitch.

“That’s why he loves Lugano and now Godin.”

There is certainly something to be said of that, with the 21-year-old often directing traffic and organising the Las Palmas backline.

Standing at 1.85m (6ft 1 in) tall, he uses his frame well and, like his more famous countrymen he is not afraid of a physical one-on-one battle with an opponent.

If truth be told, it’s hard to properly judge him in a Las Palmas team that is so attack minded, that defensively they can seem all over the place.

But Lemos has definitely improved in his 18 months in Spain, and you would say his timing of the tackle is more often than not perfect, as you can see below against Sevilla. 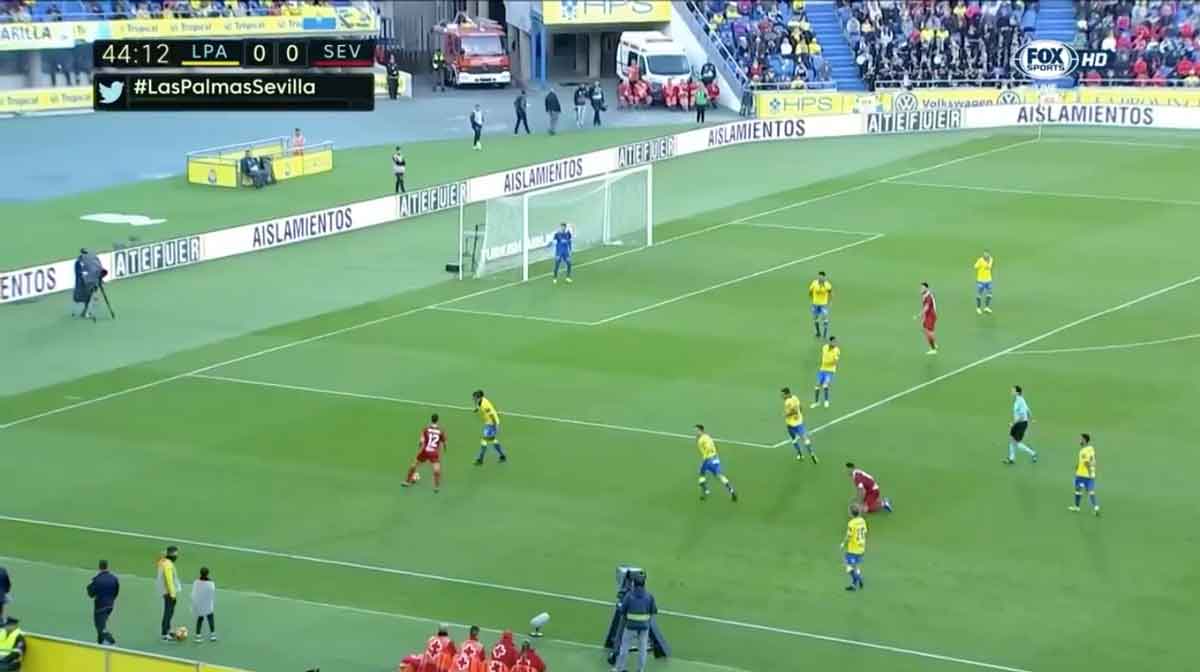 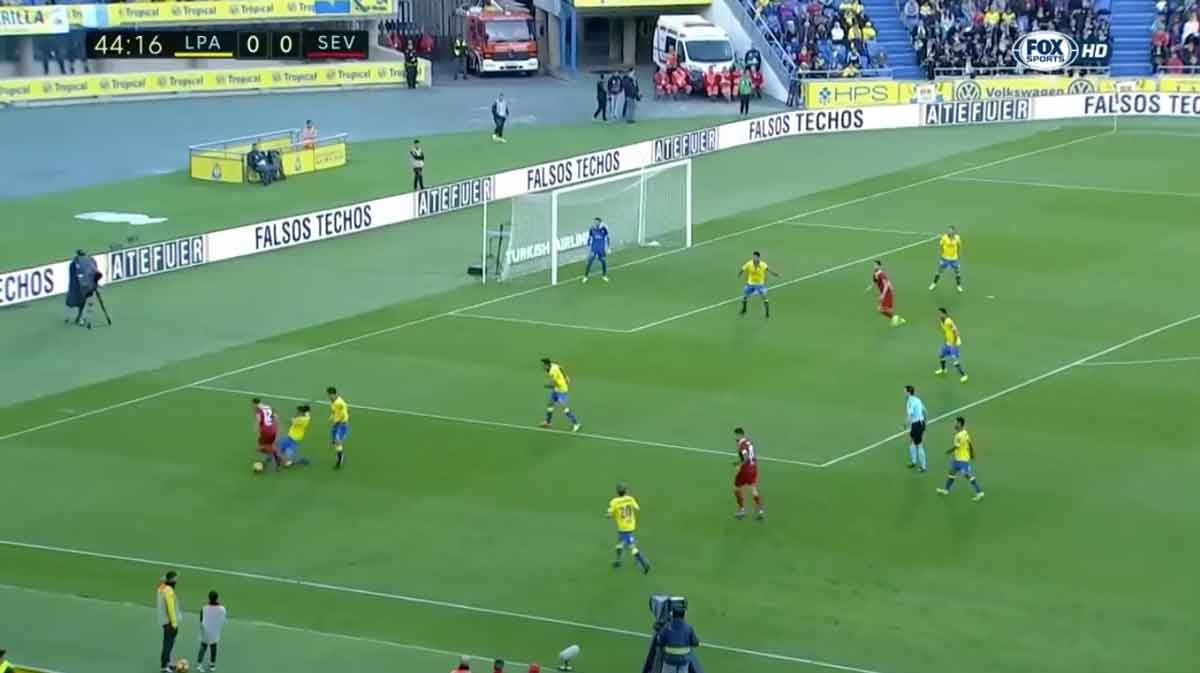 That was also the case against Barcelona below, when Las Palmas were caught up the pitch, but Lemos used this pace to get across well and deny Paco Alcácer a one-on-one chance. 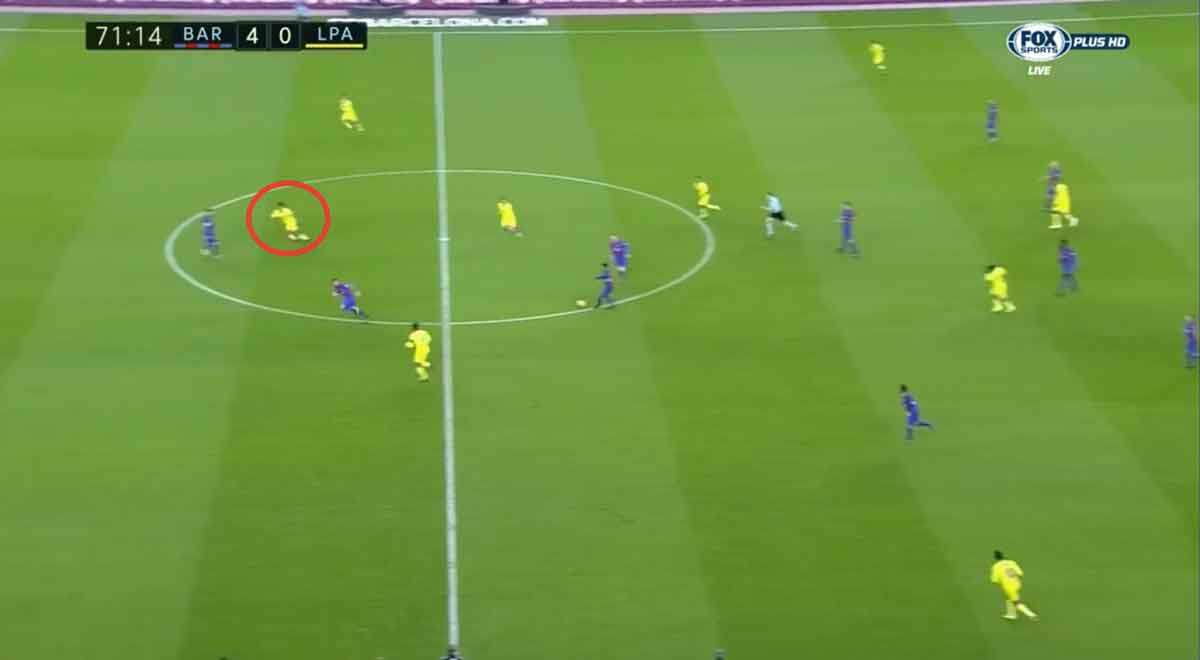 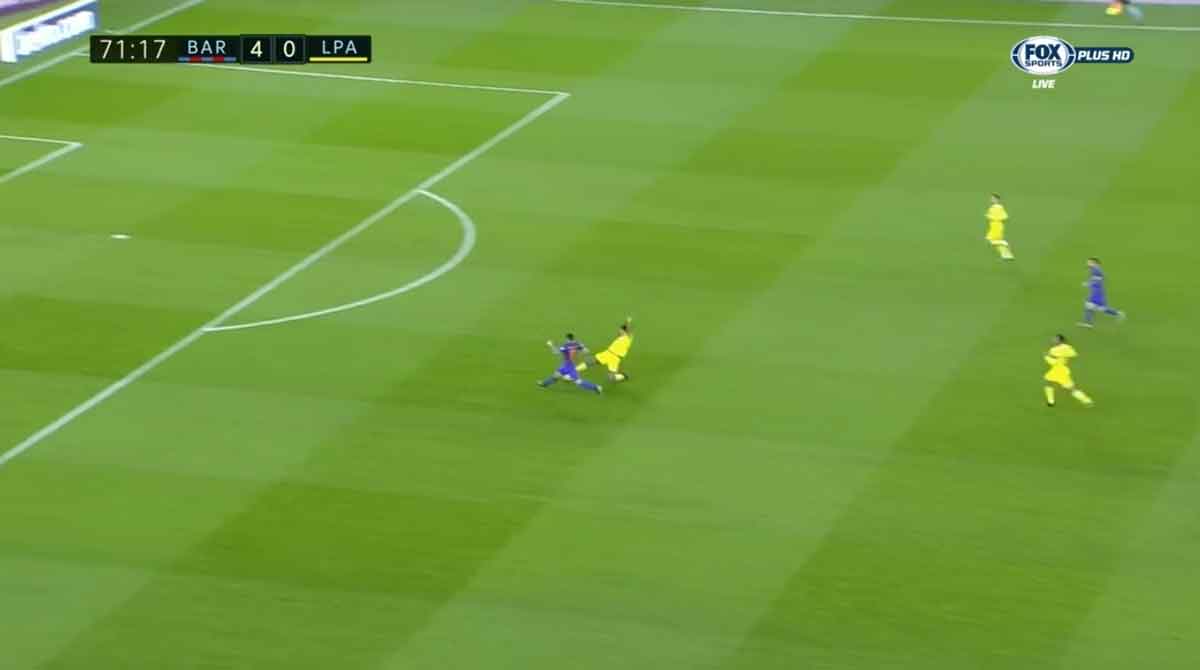 He is still very raw, but 21 is very young for a centre-back.

The Premier League would of course be a very different experience for the Uruguayan than La Liga, but Koeman is building a young, exciting team at Goodison Park, and Lemos would fit into that ideology perfectly.

As he looks to mature, you would expect down days as well as the positives, but Everton was the perfect place for John Stones to develop, and it could very well be the right location for Lemos too.