It looks like Real Madrid have won the race for Vinícius Júnior, one of the hottest prospects in world football.

Both Globoesporte in Brazil and Marca in Spain have confirmed that Los Blancos are set to seal the deal for the 16-year-old, who was also a Barcelona transfer target.

Despite having a release clause of £26million, the deal reportedly set to take him to the Spanish capital is said to total around £41million.

That’s because Real Madrid didn’t want to lose out on such a hot prospect.

And if he does sign for Zinédine Zidane’s club, as does look likely, it will be a while until Madrid fans can see him in action.

Every Brazilian that looks promising is the next someone.

And given that the Barcelona star is probably the biggest thing in Brazilian football right now, it’s only natural that one of the brightest prospects coming through the ranks in the country is dubbed the next Neymar.

Real Madrid won’t want him to be the next Neymar though – they thought they’d signed the former Santos star only for him to move to their biggest rivals.

And representatives of the club are thought to have travelled to Rio de Janeiro to close the deal with Vinícius’ current club Flamengo.

Barcelona were also interested, putting their trust in Andre Cury, the man responsible for Neymar’s arrival at the Camp Nou.

READ MORE: How Neymar Is Becoming As Important To Barcelona As Lionel Messi

But unlike with Neymar, it was Los Blancos who apparently convinced the player, his family and his club that Real Madrid is the right place for him.

And now he has a year ahead with the first-team at Flamengo – he is yet to make his senior debut – before heading to the bright lights of Spain’s capital.

Why is everyone so excited about Vinicius Junior?

Since he was 13, he’s been in the spotlight.

At that age, he was called up for the Brazil under-15 side by former Newcastle United man Claudio Caçapa.

But he’s been on the verge of football greatness since before then.

“His father came to us when he was just five and ever since he has always performed at a level way above the boys of his age,” Cacau, a teacher at Escolinha Fla Sao Goncalo, the Flamengo-connected school that raised Vinicius, told Goal.

“A curious thing about Vinícius is that, if we let him, he would have trained with every age group, he just never seemed to tire.

“To this day, he comes back and visits us, bringing his medals and sharing his experiences with the children. We really admire the fact that he always comes back here.”

After standing out in a regional tournament, he was moved on from Escolinha to join the official academy of Flamengo.

He stood out instantly due to his technique, dribbling ability and his eye for a goal and became the start of the ‘Generation 2000’, a team made up of players born at the turn of the millennium who went three years without losing a match.

But perhaps his standout moment in his very young career so far was at this year’s South American Under-17 Football Championship, where he won the award for the best player. 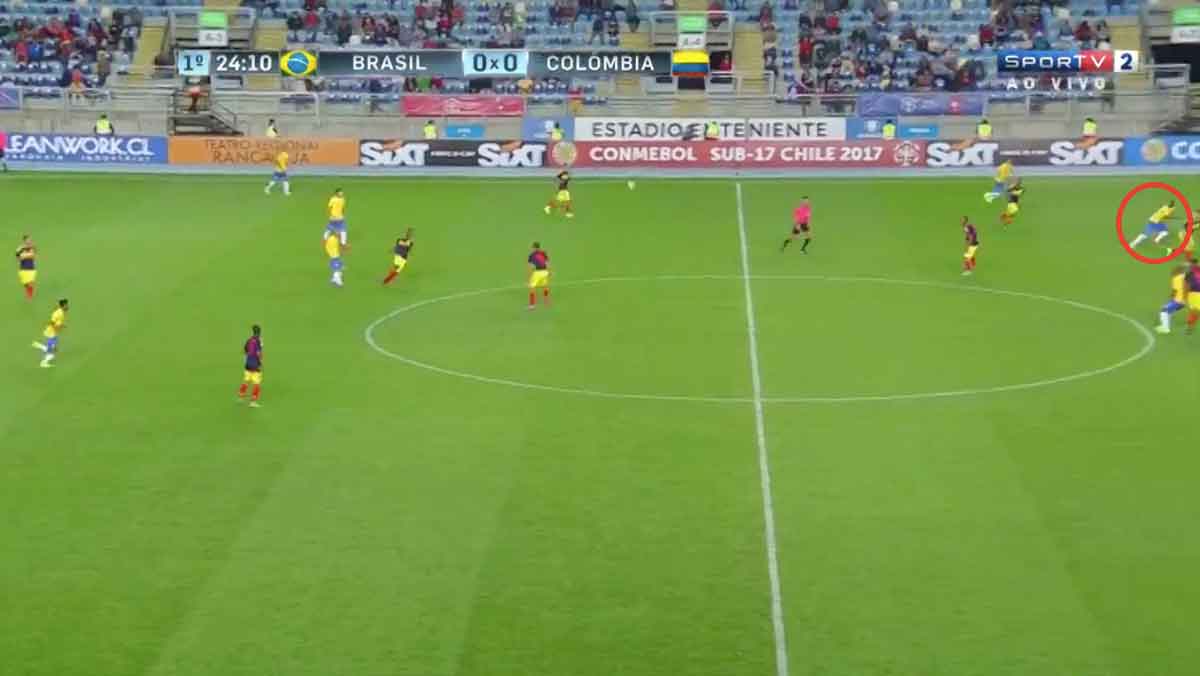 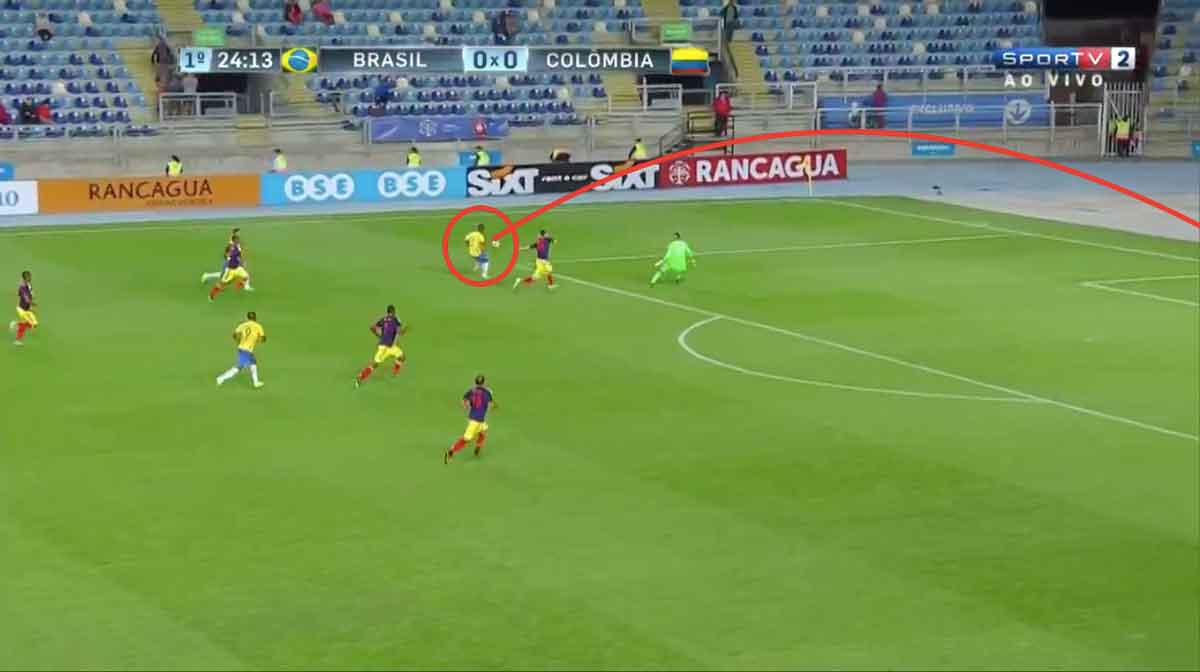 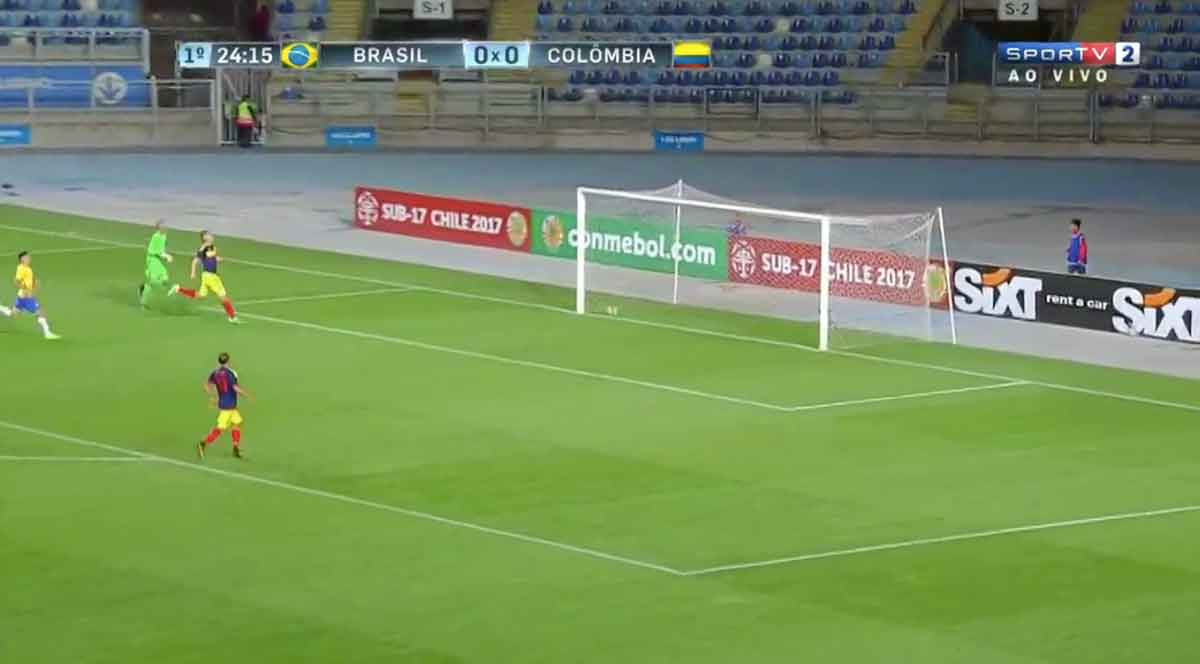 His goal against Colombia just underlined his skill and eye for a goal.

Getting on the end of a ball over the top, the young Brazilian took advantage of the goalkeeper finding himself in no man’s land with a sumptuous lob that landed on the goal line. 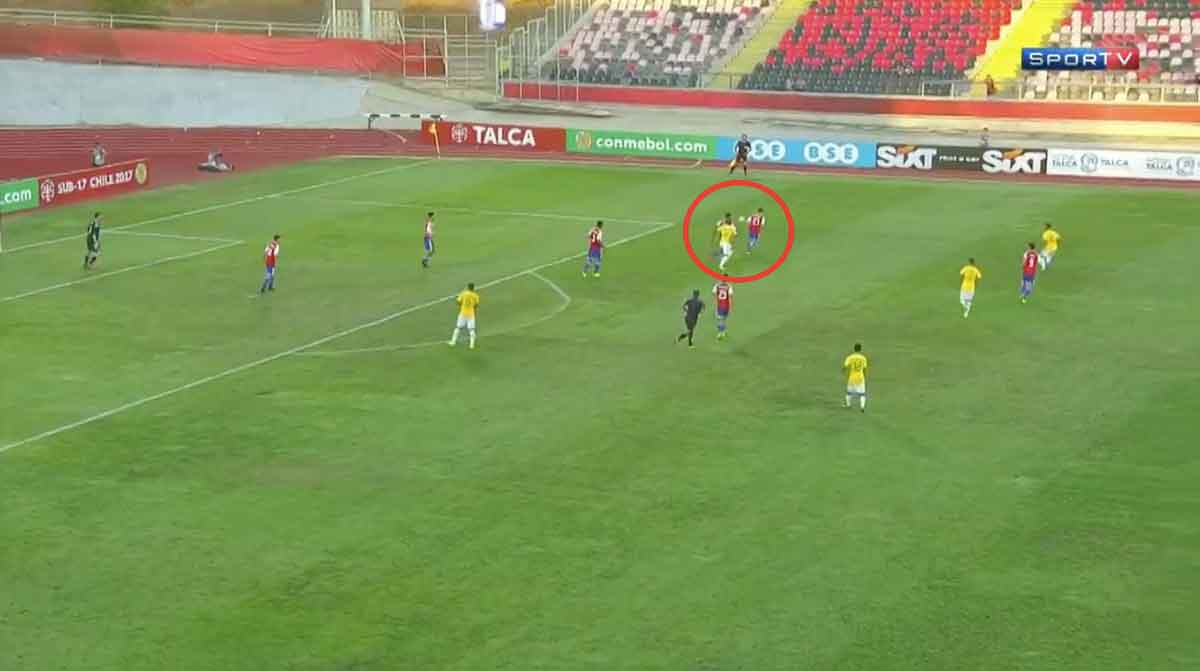 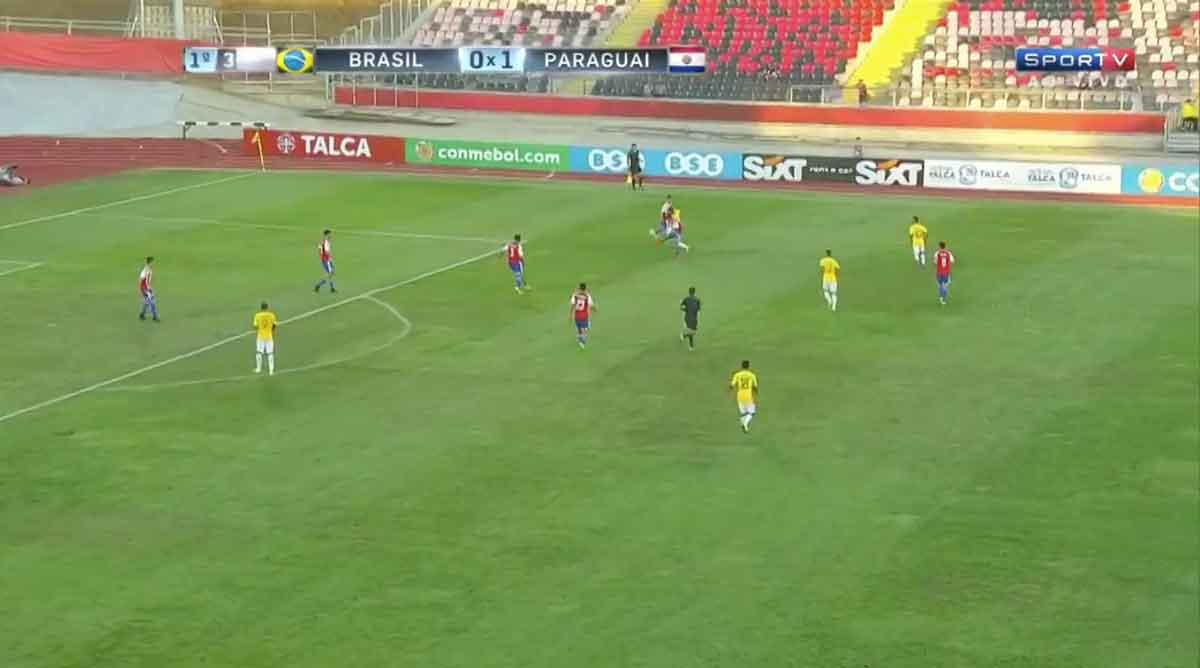 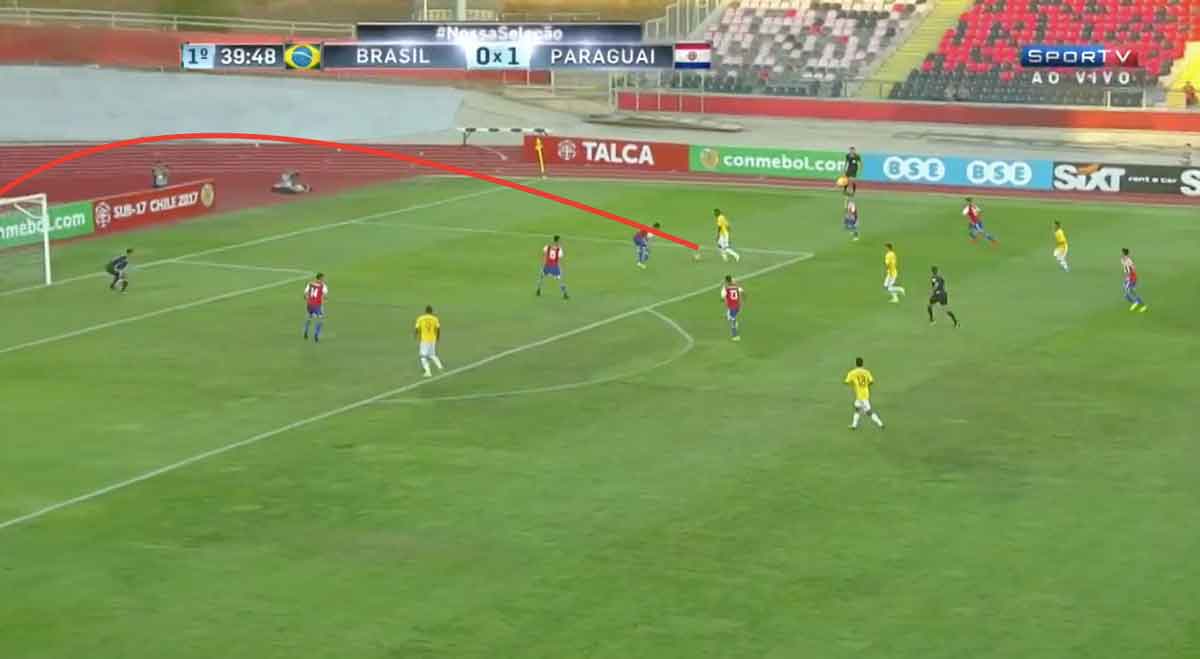 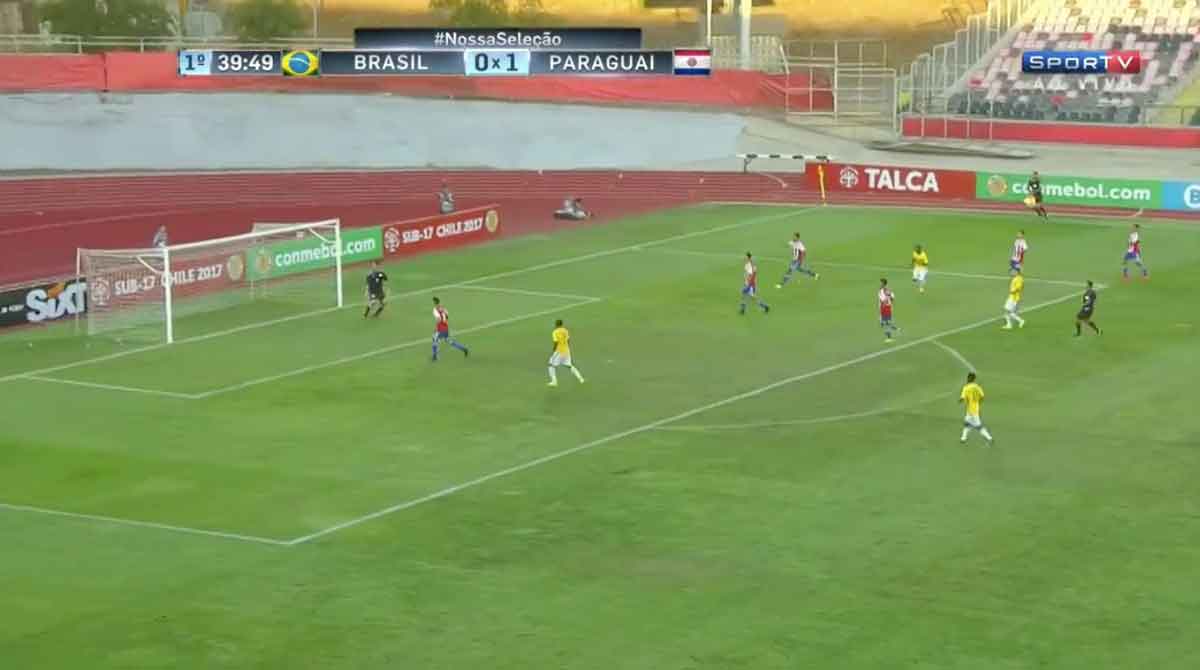 And his goal against Paraguay was every bit as good as the one against Colombia.

Capitalising on the defence being slow to clear the ball, he nips in and moves forward with it onto the edge of the penalty area, before producing a jaw dropping chip that gave the goalkeeper no chance whatsoever.

It was just pure brilliance. 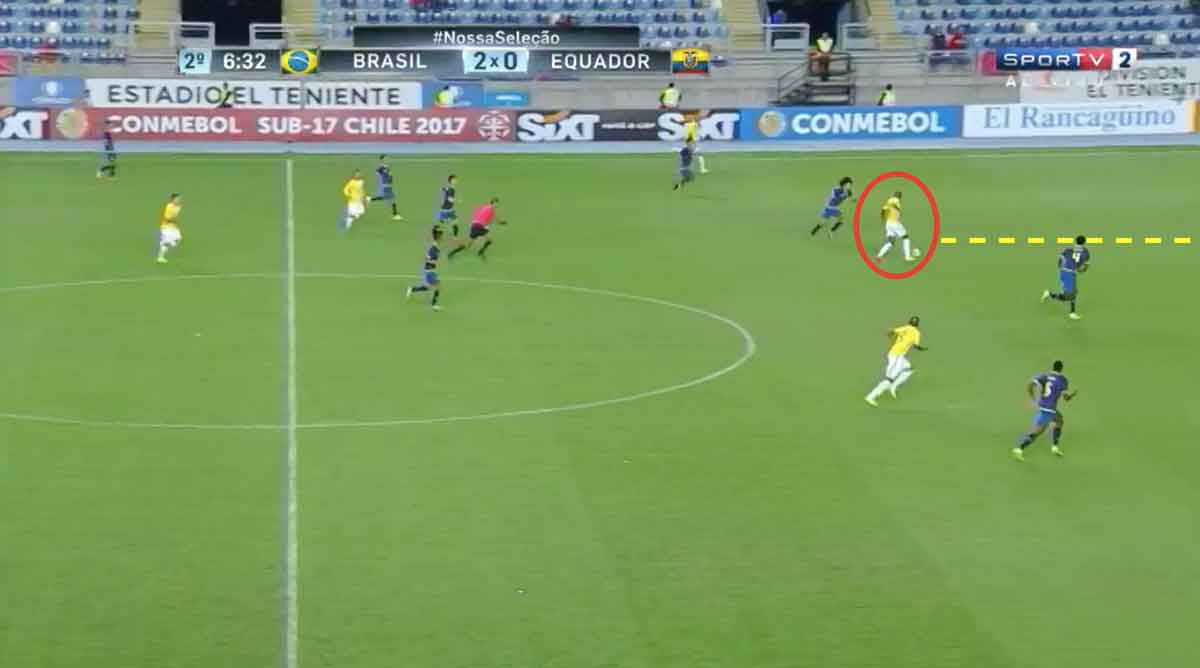 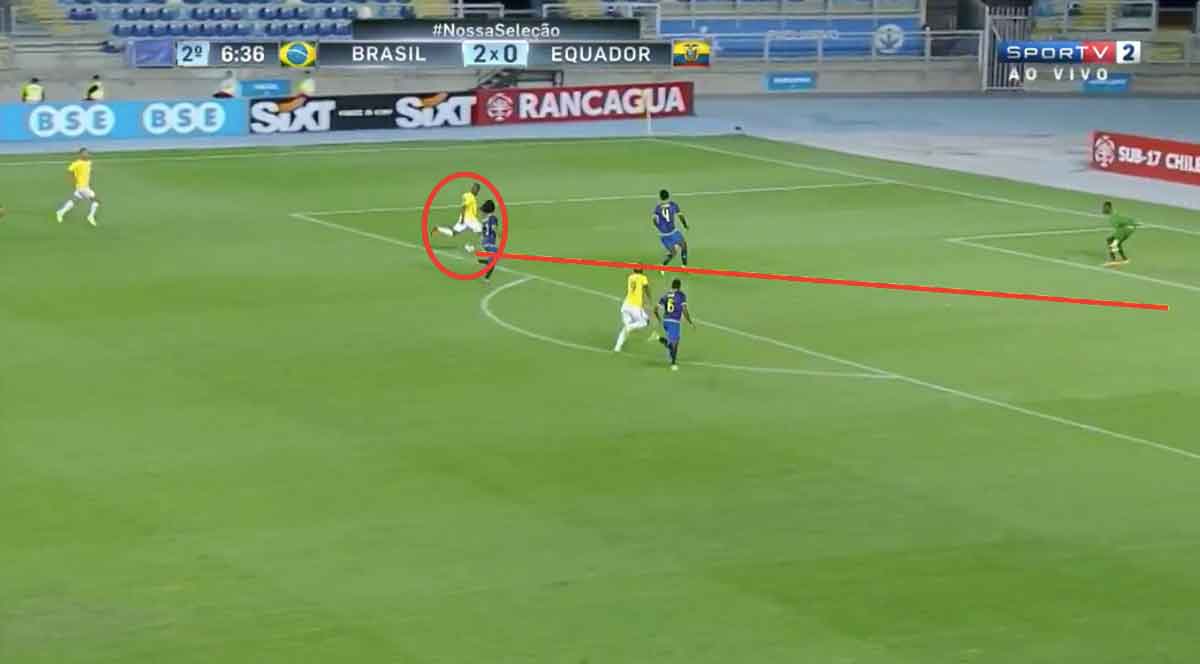 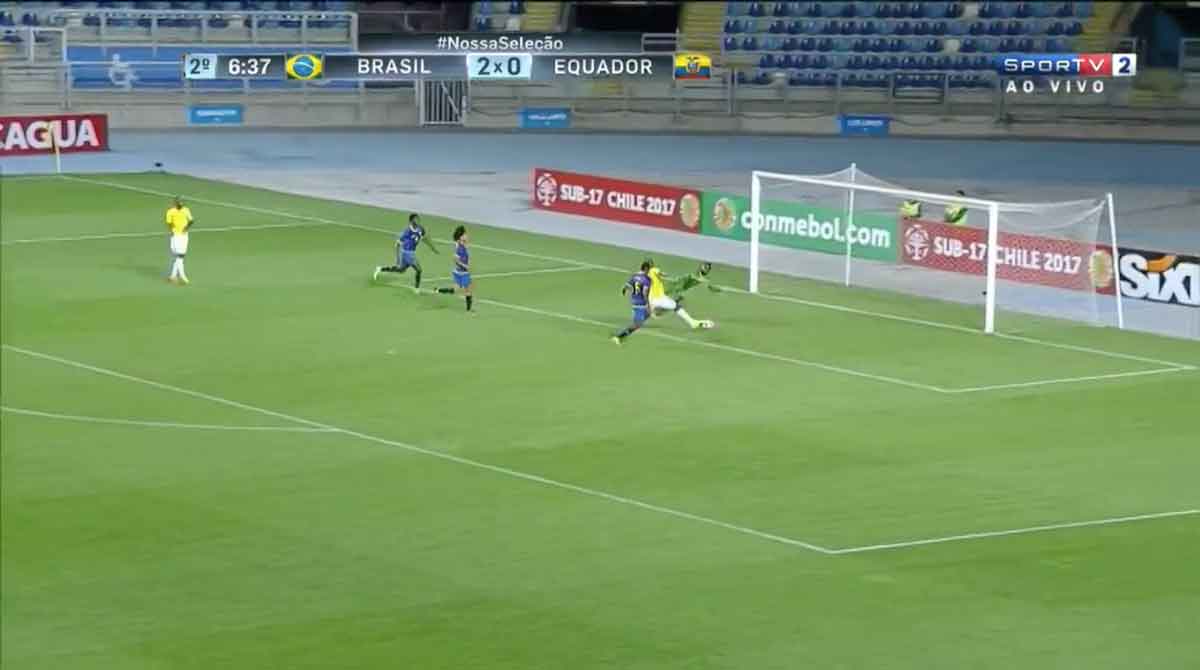 But he’s not just about goal scoring.

His brilliant pass against Ecuador, when most people thought he would have a shot underlines that.

After getting to a great position on the edge of the box he lines up what looks like an effort on goal, instead rolling it through to his team-mate for an easy tap in from the edge of the six-yard box. 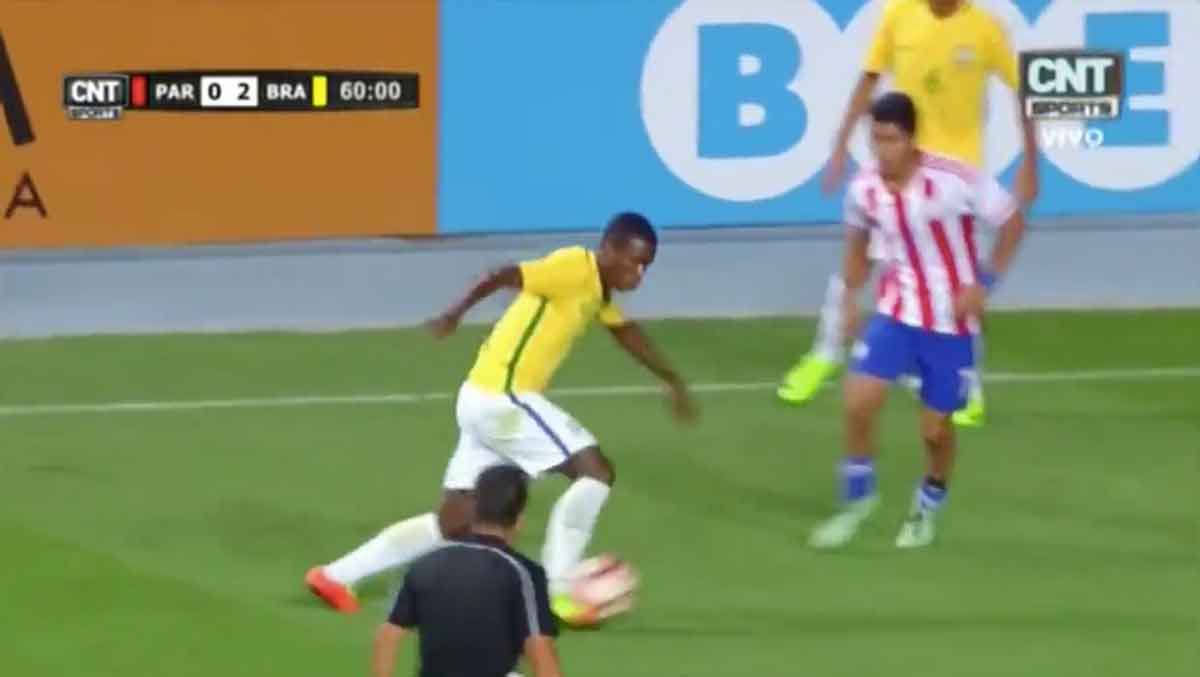 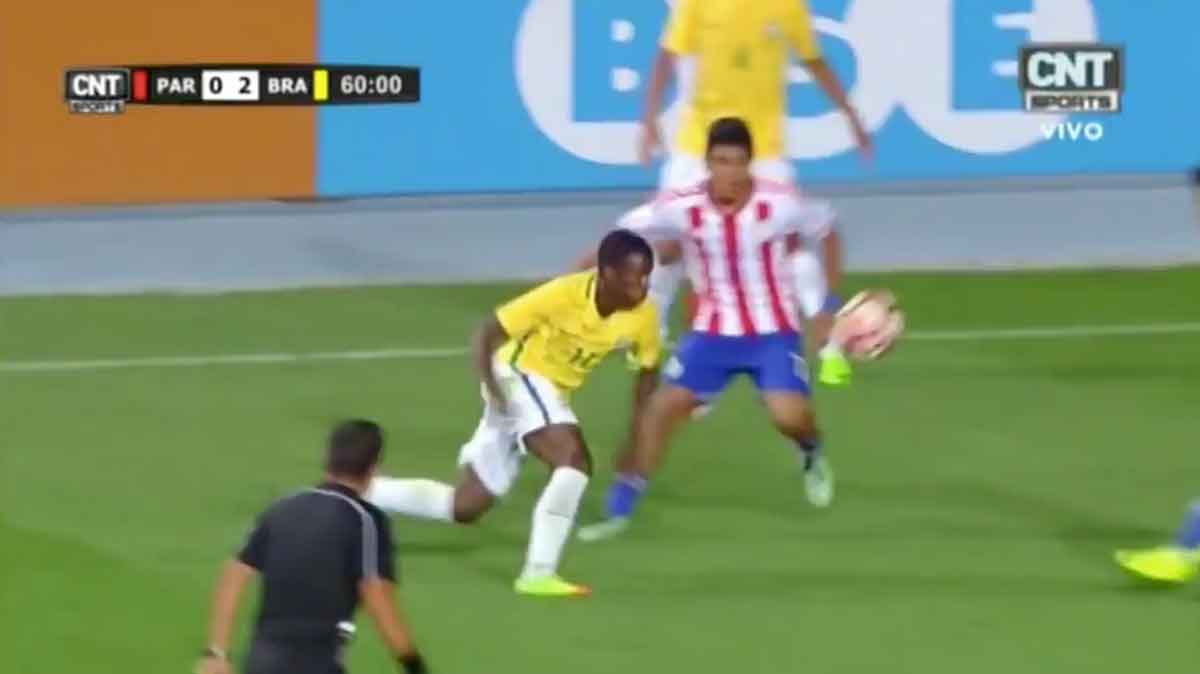 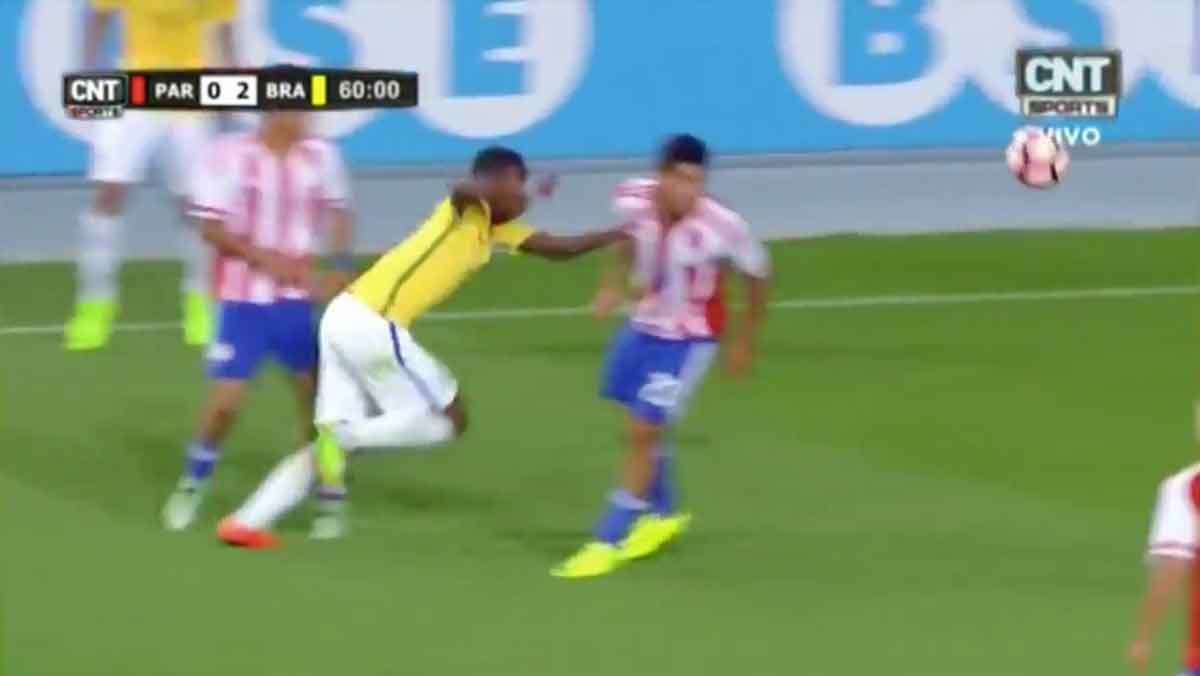 And if you want an idea of his dribbling ability and skill on the ball, the three stills above just show you how good his footwork can be.

Picking it up against Paraguay, with his first touch, he scoops it past the oncoming defender, giving him no chance, before leaving him for dead and running away with the ball. 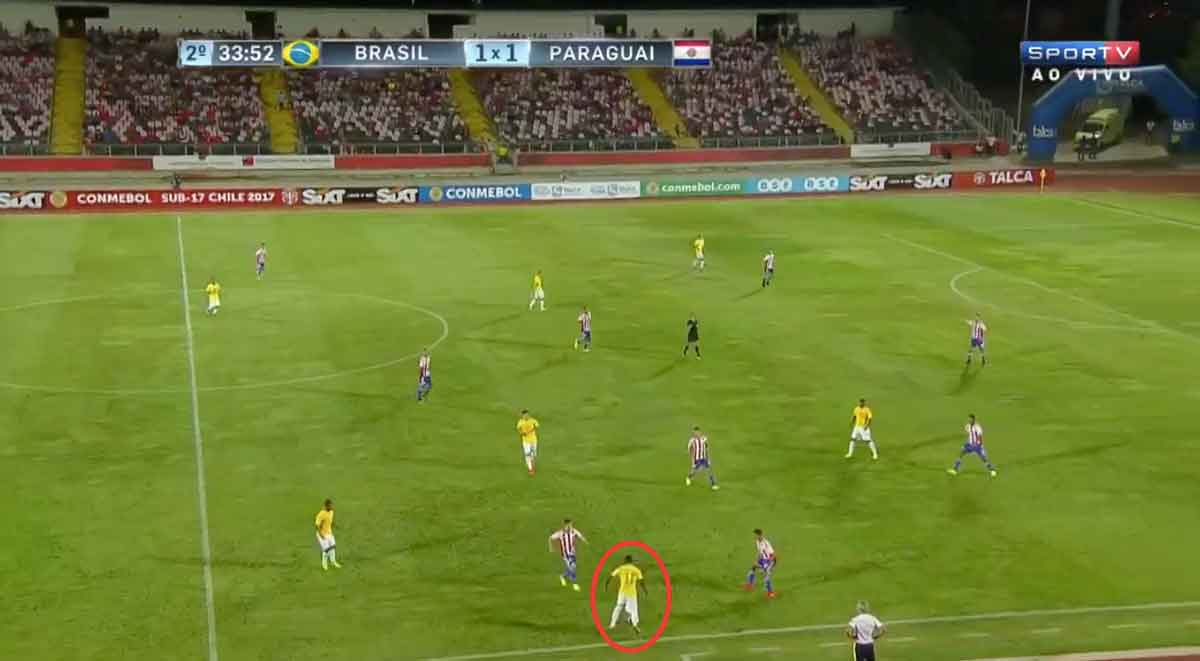 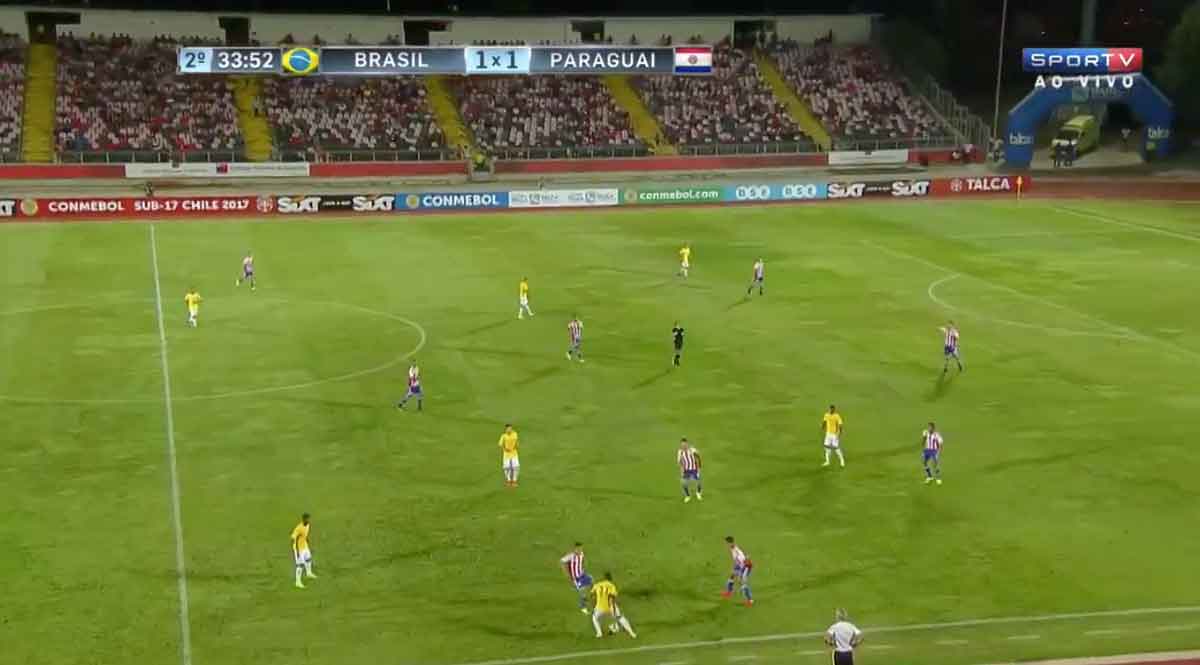 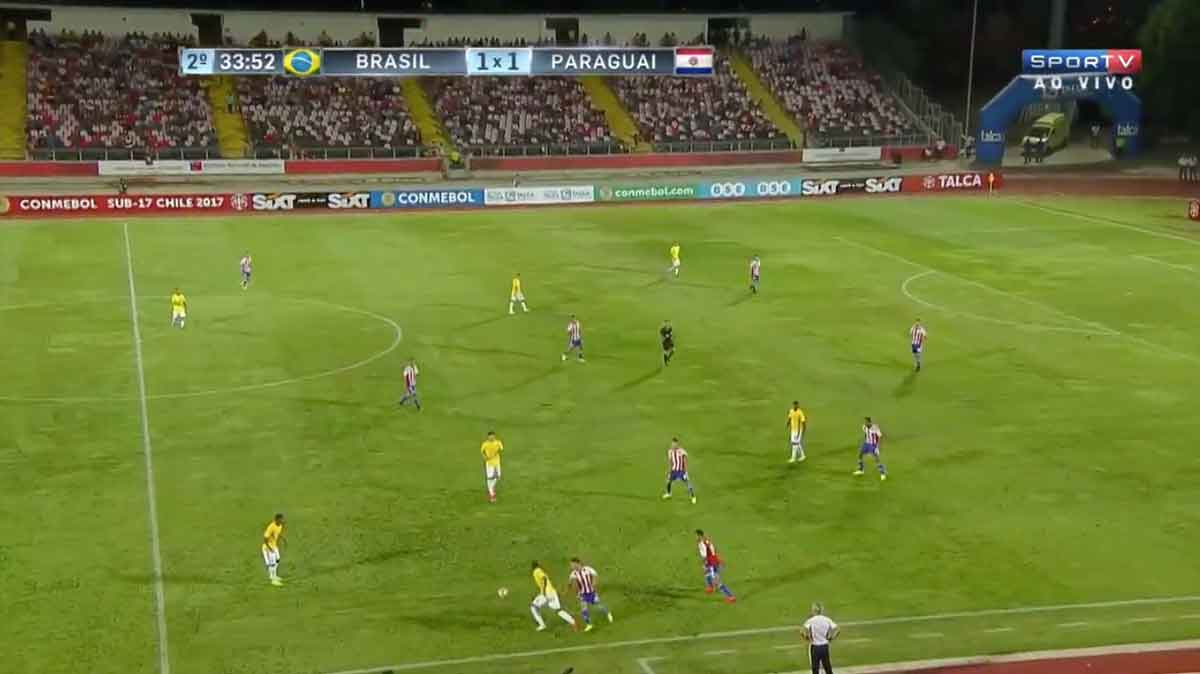 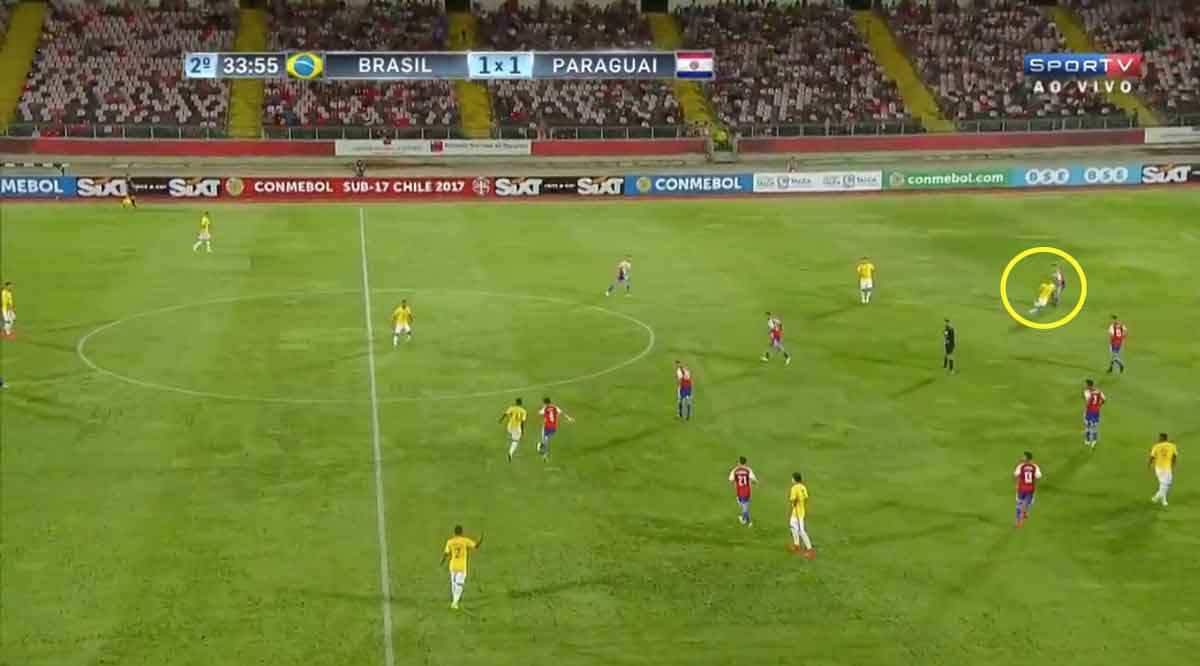 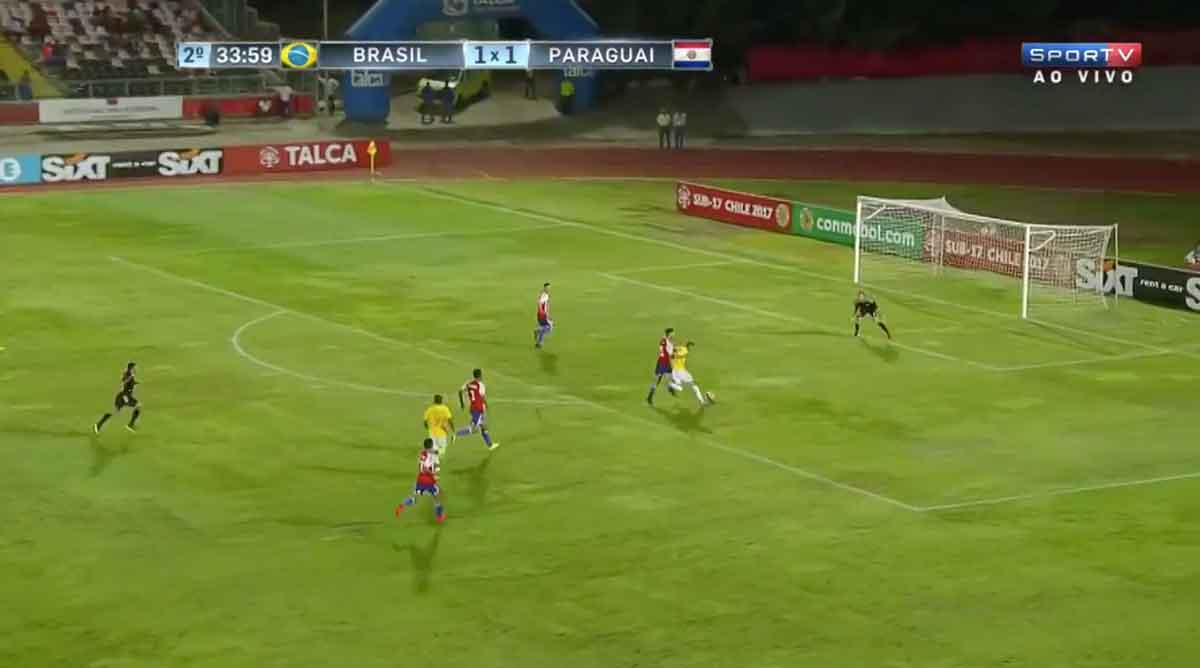 And in the tournament, he also showed he can well and truly combine his footwork and eye for a killer ball.

Picking it up on the wing against Paraguay, he uses his quick feet to bamboozle the opposition player, before playing a great ball through to leave his teammate in a goalscoring position. 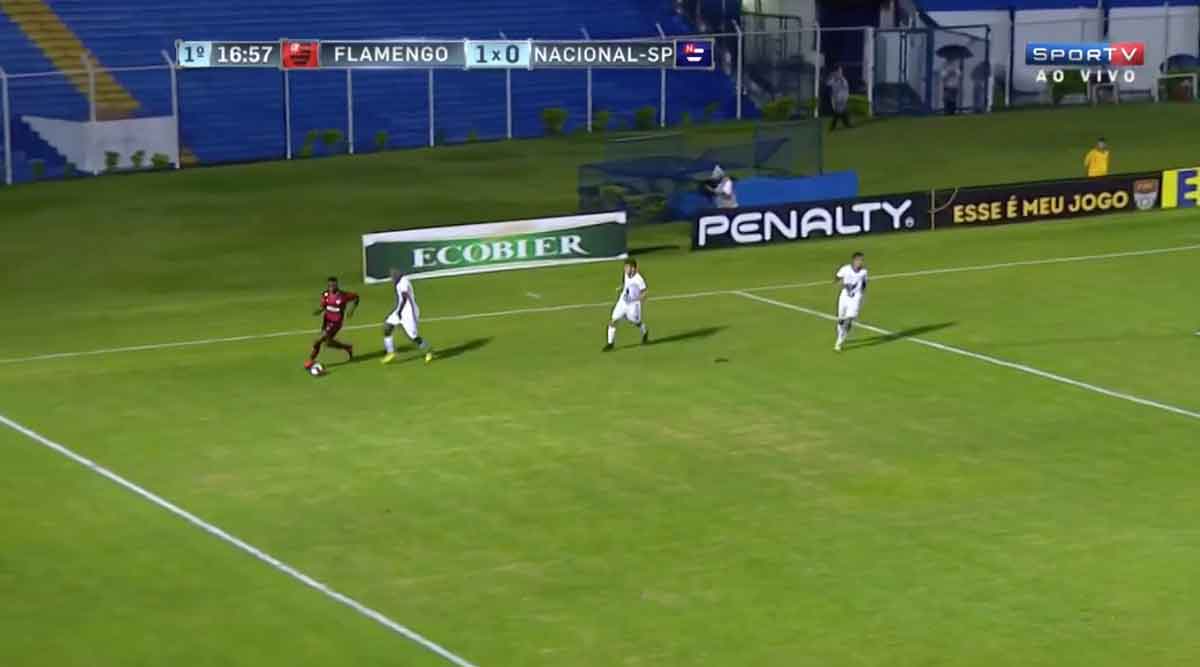 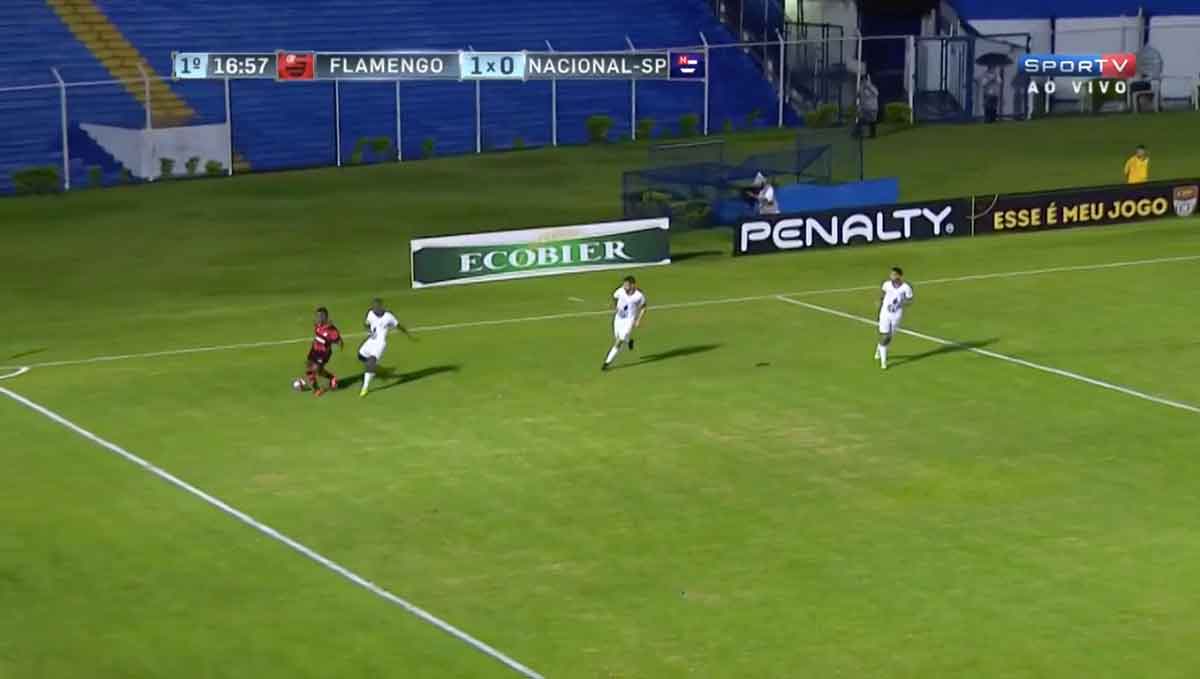 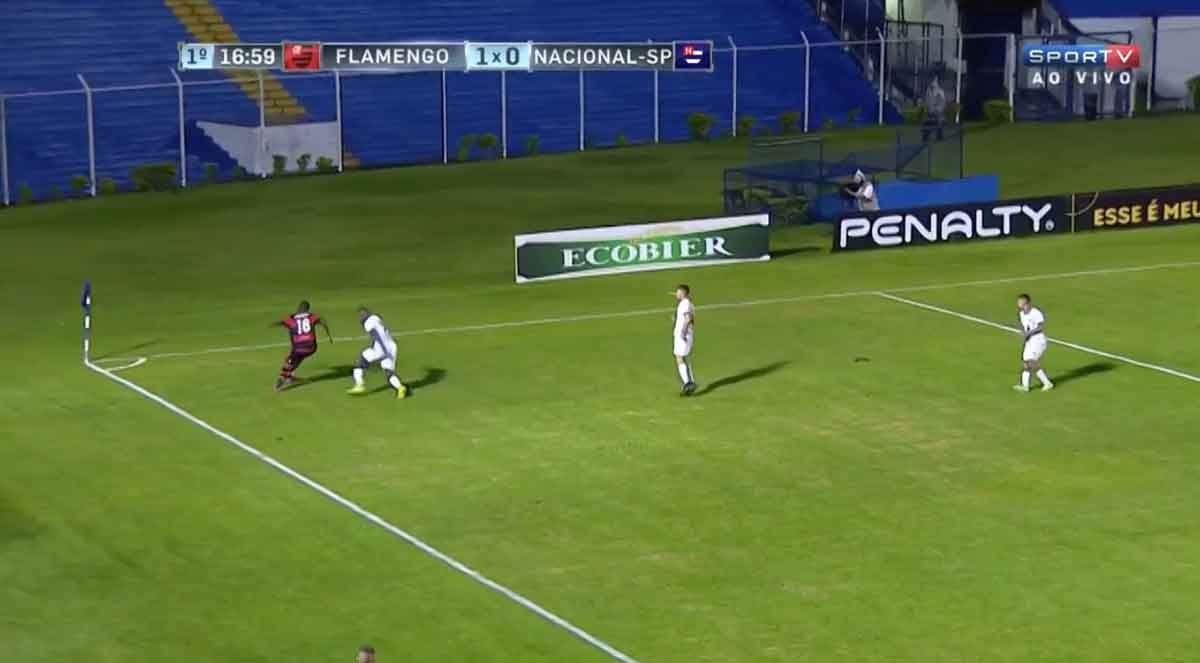 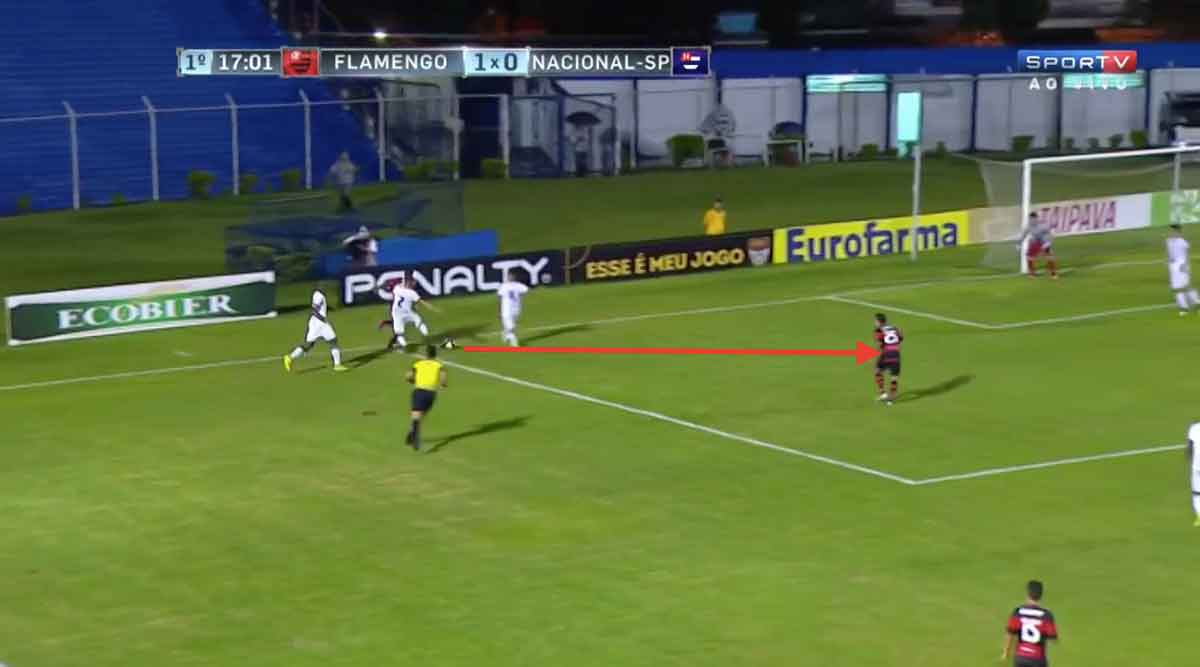 It would be of course absurd to judge him based on just one tournament, but Real Madrid will know Vinícius is more than just that.

Time and time again for Flamengo’s youth teams this season, he’s proven that.

The stills above, taken from an under-20 match show him tricking the defender into a false sense of security, before a bit of skill takes him towards the goal and pace and quick feet help him beat take three opposition players out of the game and lay the ball of for a teammate to score first time.

That’s the sort of thing that means Madrid look likely to splash out so much money on a teenager yet to make a first-team appearance.

Of course it’s a risk, they know themselves first hand with Martin Ødegaard how 16-year-olds can struggle in the Spanish capital.

But with Vinícius staying at Flamengo for at least the next 12 months, Madrid will hope he has time to mature and ends up being more of a Neymar than a Robinho in LaLiga.

And if he continues like he’s progressing, he could well be a future Ballon d’Or winner.