Ryad Boudebouz appears to have been a long-term Newcastle United transfer target.

He was first linked to the Magpies back in January, and the rumours have resurfaced this month from France, with journalist Romain Collet-Gaudin tweeting that a move is back on.

Of course it’s no surprise that Newcastle want someone from Ligue 1, with their well-known policy of bringing in impressive players from France.

The likes of Yohan Cabaye and to a lesser extent Hatem Ben Arfa were successes at St James’ Park, but there have also been disappointments, such as Romain Amalfitano, Rémy Cabella and Florian Thauvin.

And if Boudebouz arrives in the North East, Magpies fans will hope he’s more like Cabaye or Ben Arfa.

The 27-year-old Algeria international has spent all of his playing career in France.

He came through the youth team at Sochaux in 2008, where he had the most prolific spell of his career, scoring 30 times in 180 appearances.

In 2013, he moved to Bastia for €1million, where he spent two seasons, scoring eight goals in 73 appearances, earning himself a move to Montpellier, where he has scored 13 times in 73 games during two campaigns.

Despite being a French Under-17 and Under-19 international, Boudebouz represents Algeria at international level, making his debut in a friendly against Ireland in May 2010, and now has 25 caps for his country.

Back in January, former Liverpool and Tottenham Hotspur director of football Damien Comolli told Football Whispers TV that the Algerian may be on the move, saying: “He is on the market and Montpellier won’t mind him going.”

Boudebouz has been playing in a No.10 role off the striker, a role which at Newcastle is often filled by Mohamed Diamé.

The 2016/17 season was hugely impressive for him, being directly involved in 20 goals (11 goals and nine assists).

He also averaged more key passes per game than anyone else in the league, with 3.5.

Jonjo Shelvey averaged the most out of any Newcastle player last season in the Championship, but he was someway off, with 2.1.

Boudebouz’s key passes in the league work out at 117 over the season, that’s more than the likes of Mesut Özil (100).

What’s more is that the Algerian offers a variety of passing ability, with 38 of his key passes being from length and 79 short, while the German has just 17 long – 83 were short passes.

And you can see his passing ability below against Angers, where he picks up the ball in the middle of the pitch, before finding an inch-perfect pass to his Montpellier team-mate, who’s running onto the ball. 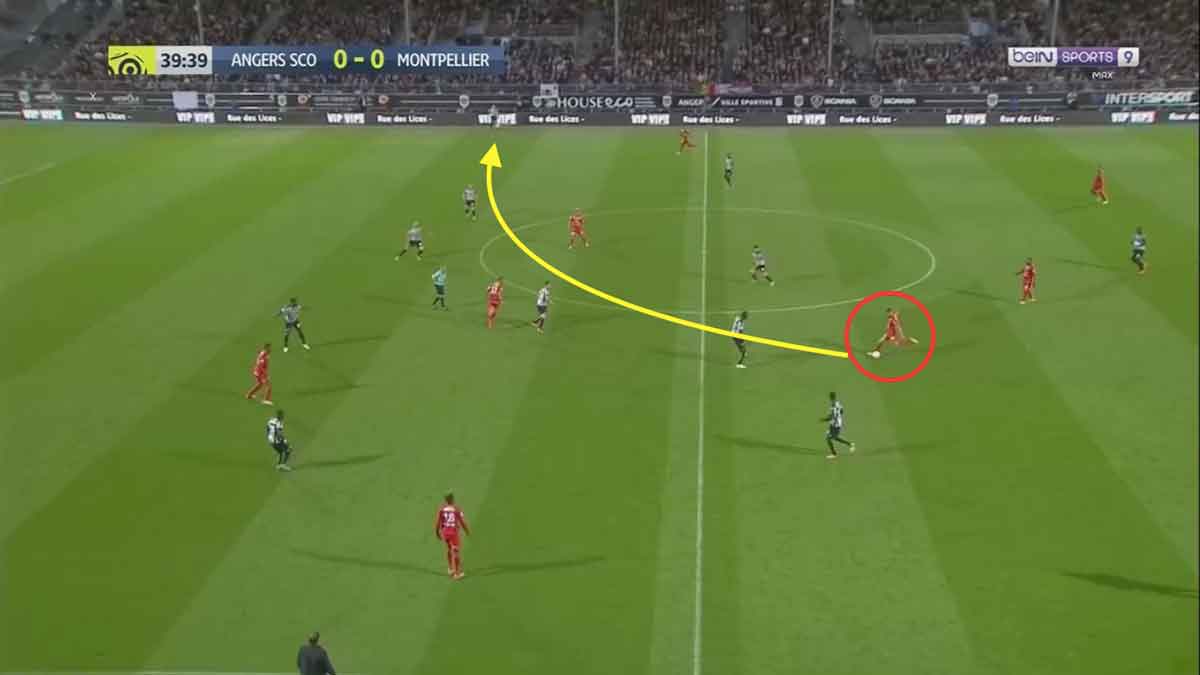 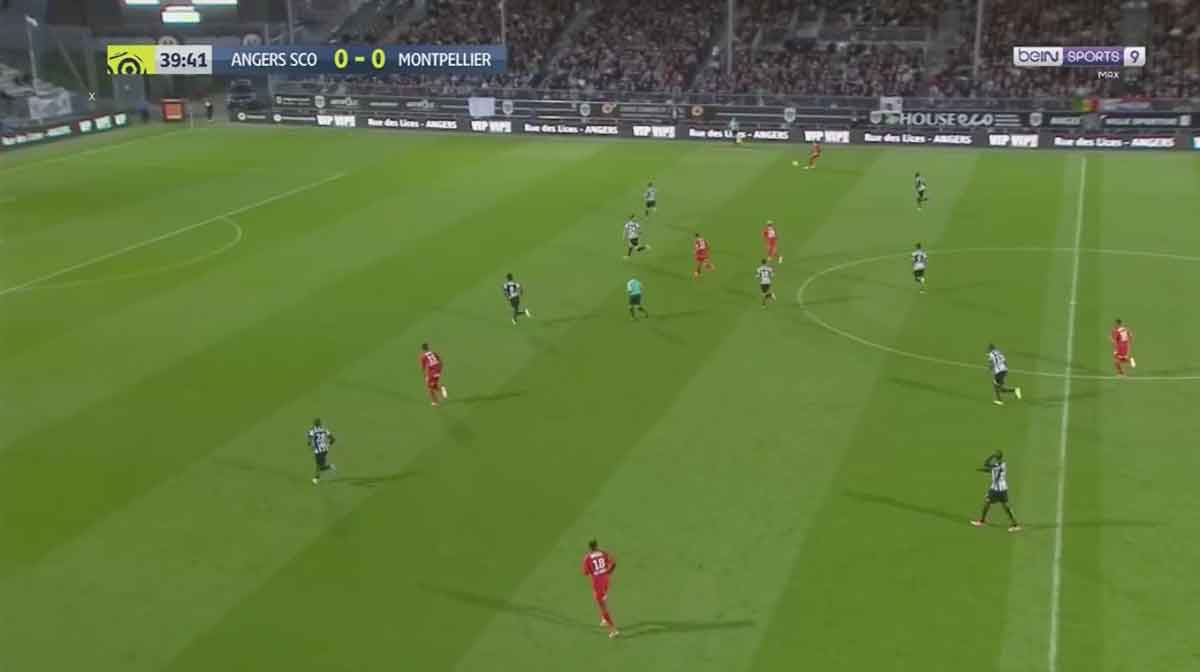 It’s the same situation against Caen, where he picks up the ball just inside his own half, before playing a lovely ball through to his team-mate, who has been circled in green in the below image, to send them through on goal. 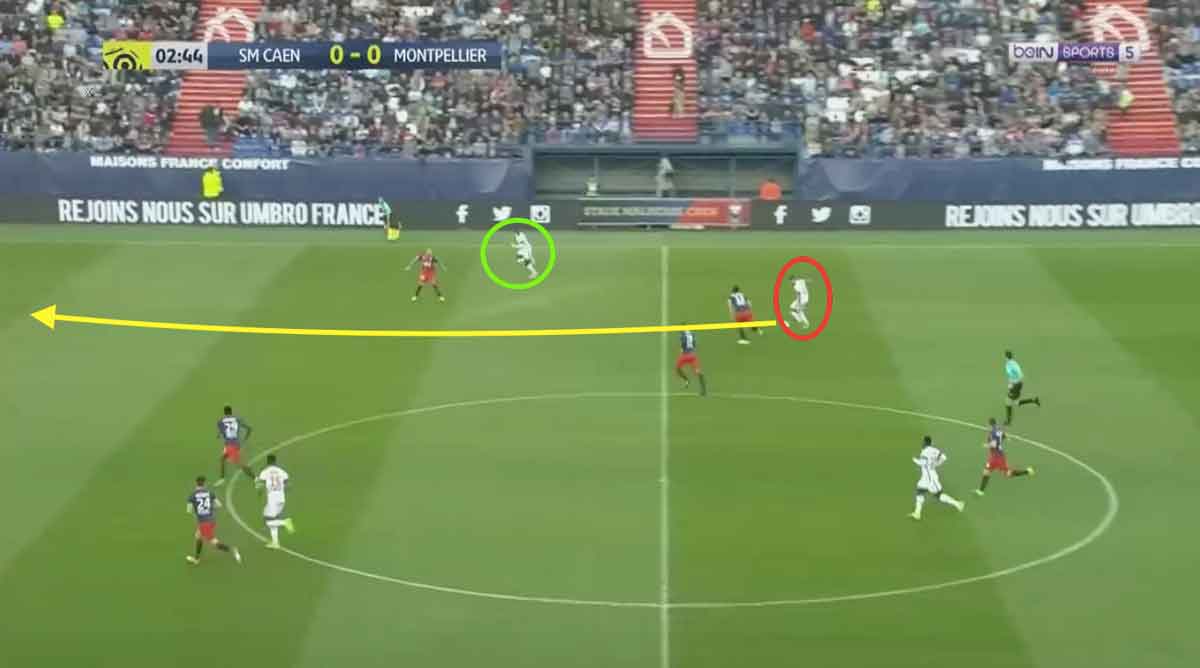 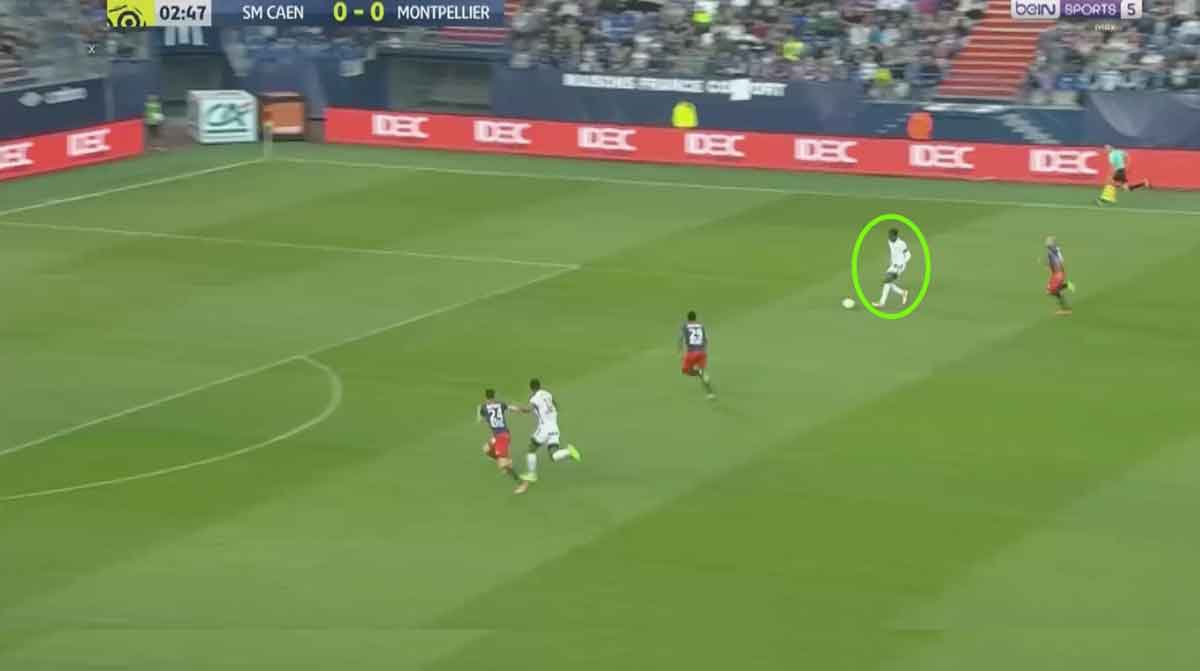 While he is at home in the No.10 role, Boudebouz isn’t averse to drifting out wide.

In the images below, taken against Nantes, you see him pick up the ball on the left wing, before cutting back and playing a great cross to give his team-mate a goalscoring chance. 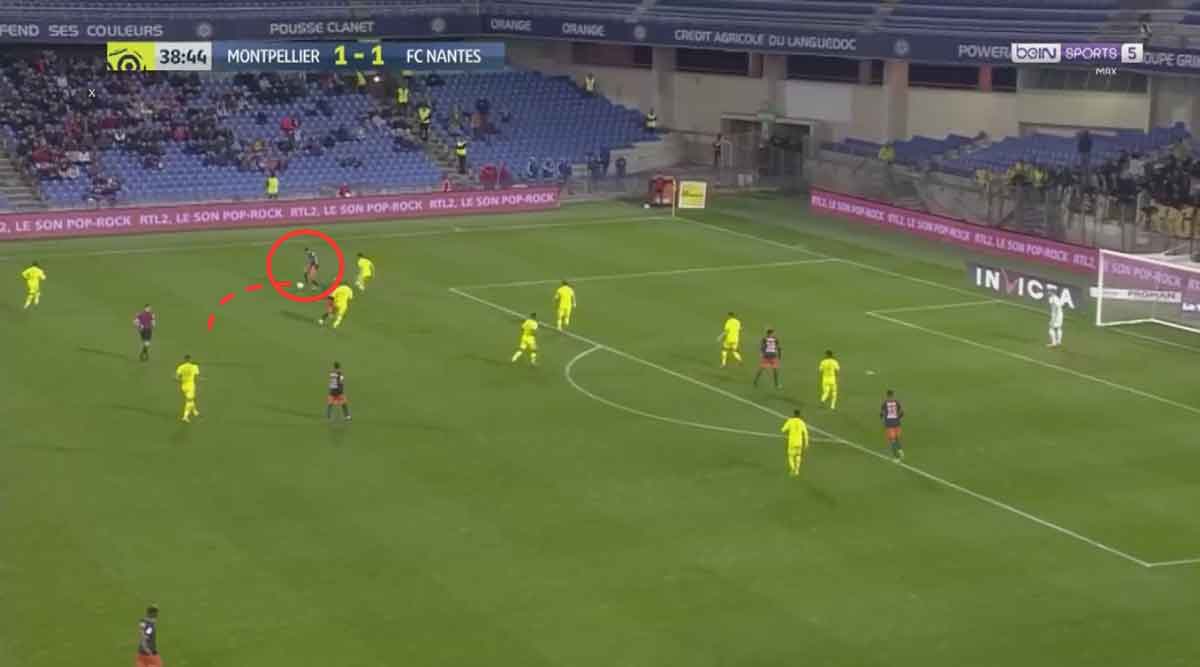 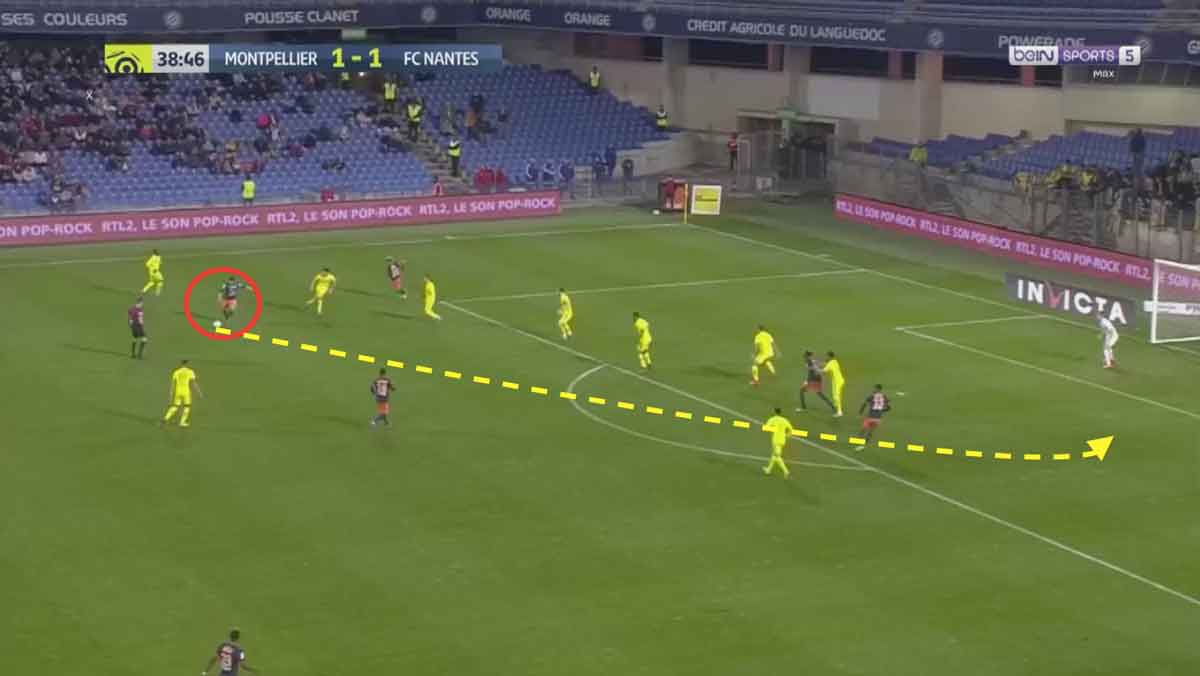 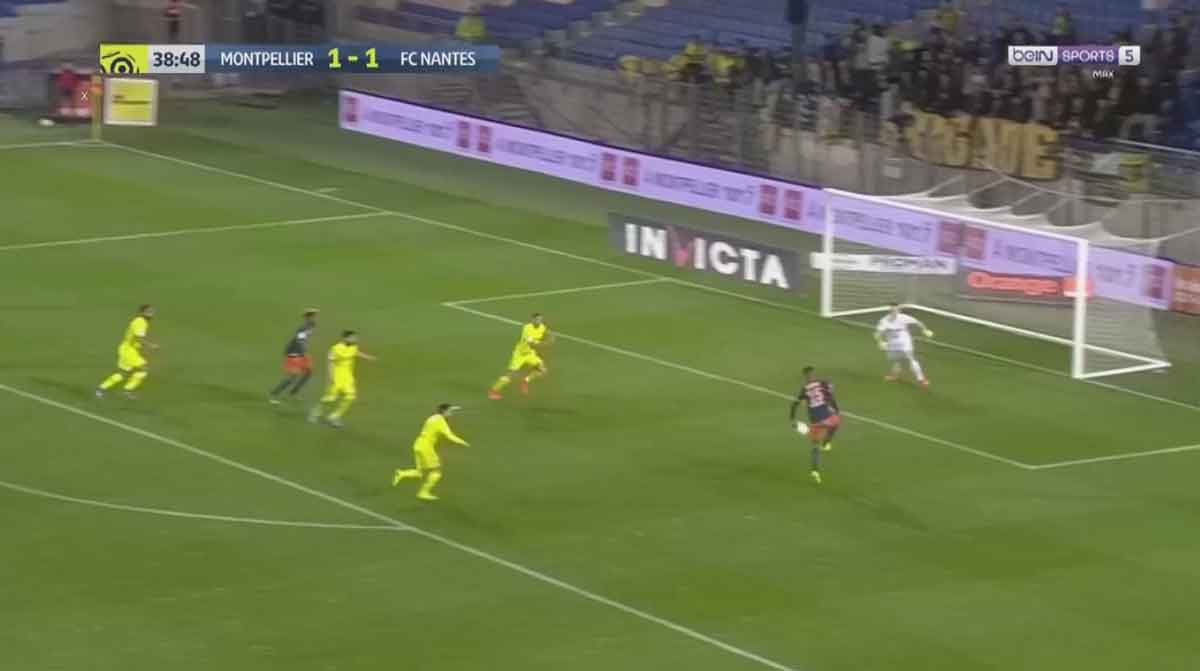 You can see him operating in a wide position in the images below as well, taken against Nancy.

With the game slowing down as it reaches its close, the Montpellier man picks the ball up just in the opposition's half, near the touchline.

He uses his quick feet to take it through the legs of the opposing defender and push forward, before sliding in a lovely ball to leave his team-mate with a simple chance to add to his side’s tally. 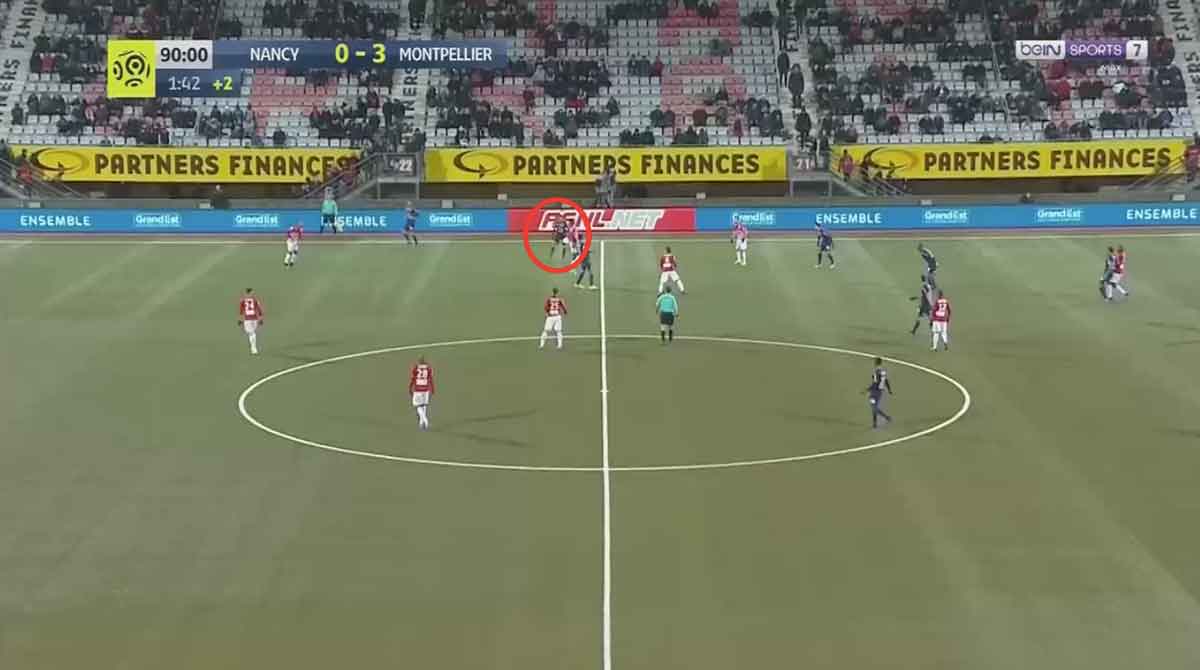 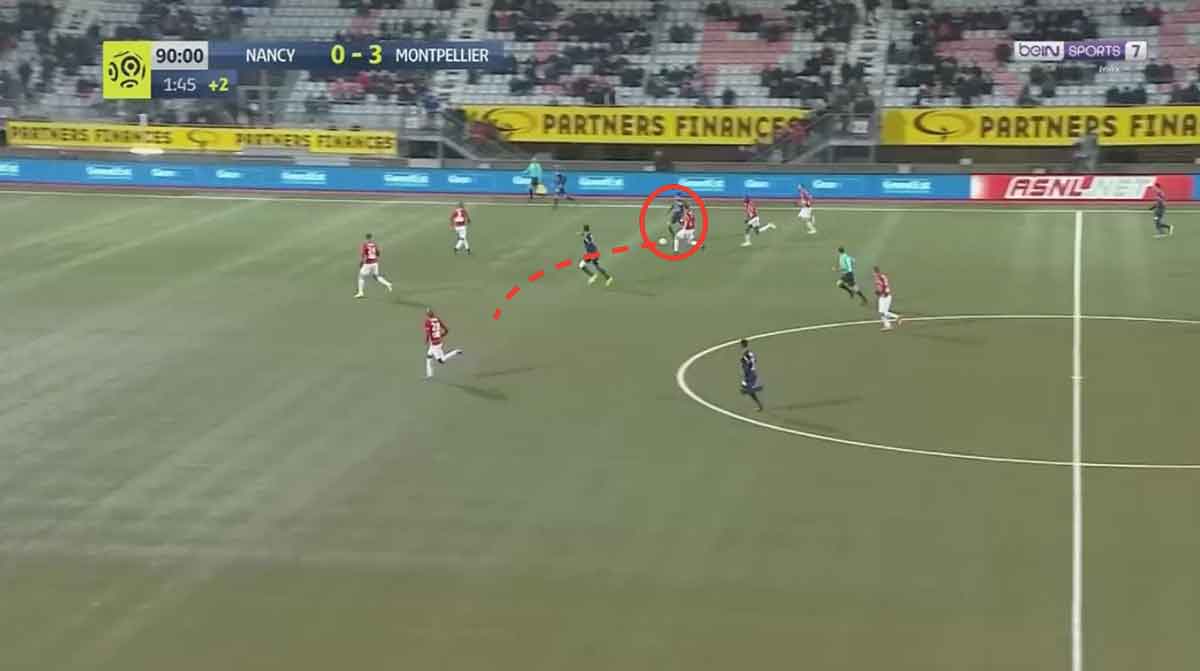 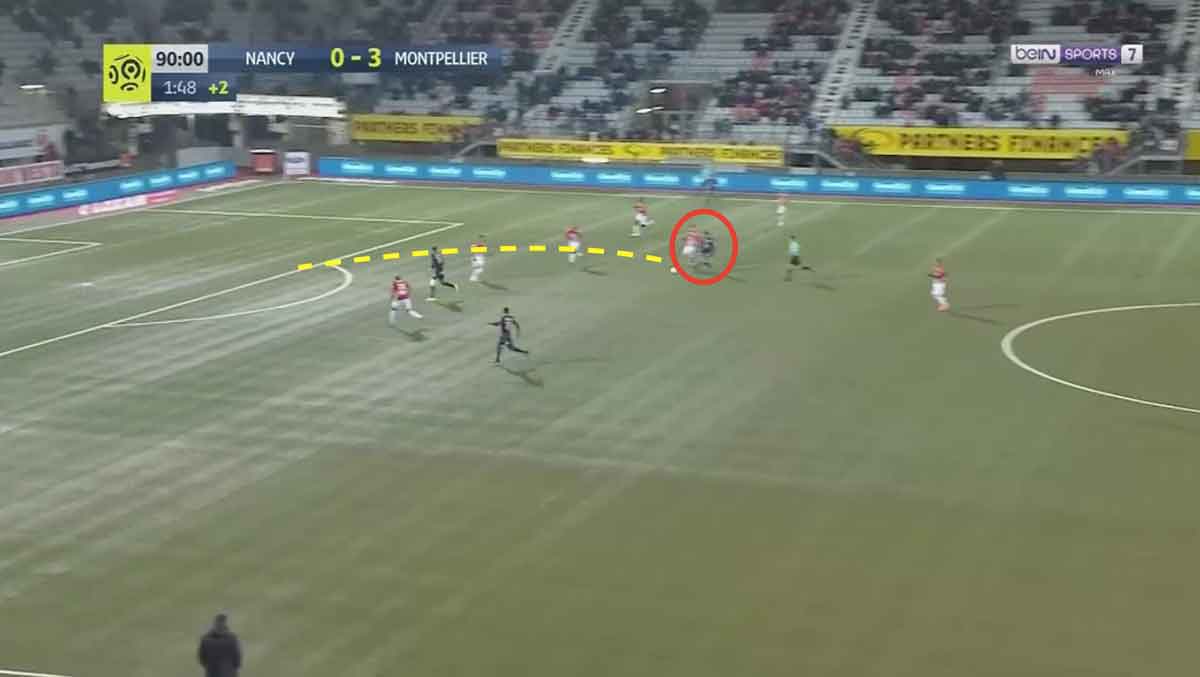 And that passing ability means he’s naturally a danger from set pieces, which is clearly a bonus for any team.

In the aforementioned game against Nantes, Boudebouz is responsible for the match’s opener, with a lovely whipped free-kick into a dangerous area leading to his team-mate getting on the end of the set piece and heading it into an empty net with the quality of the ball leaving the goalkeeper stranded. 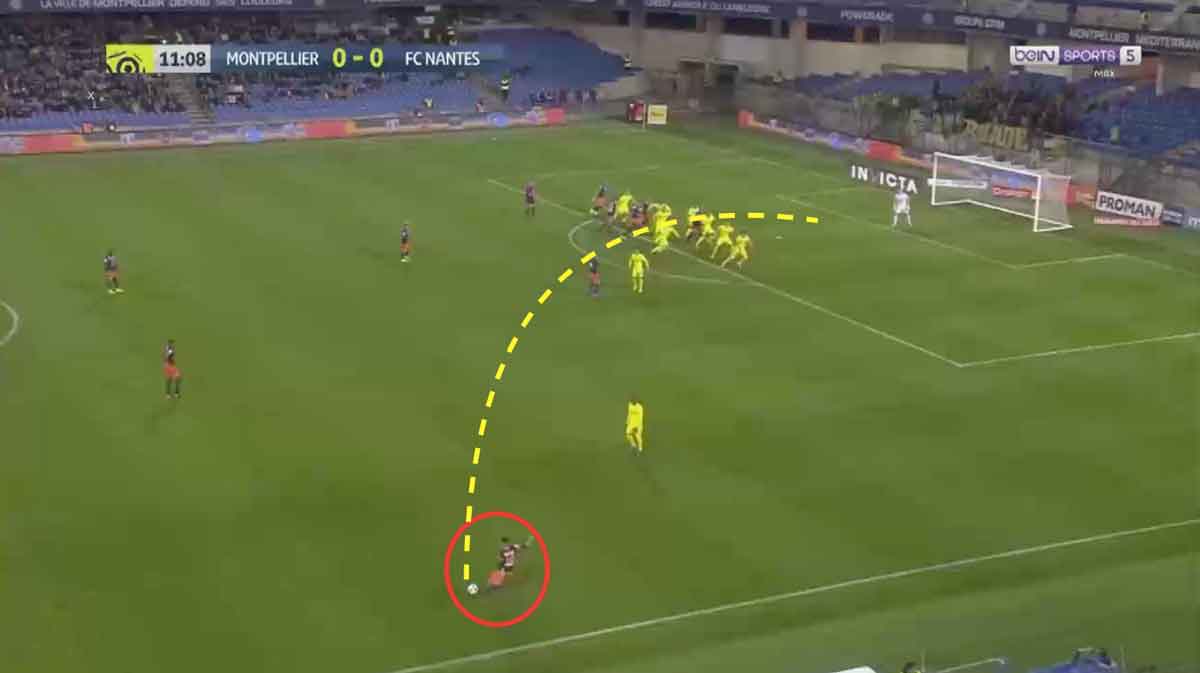 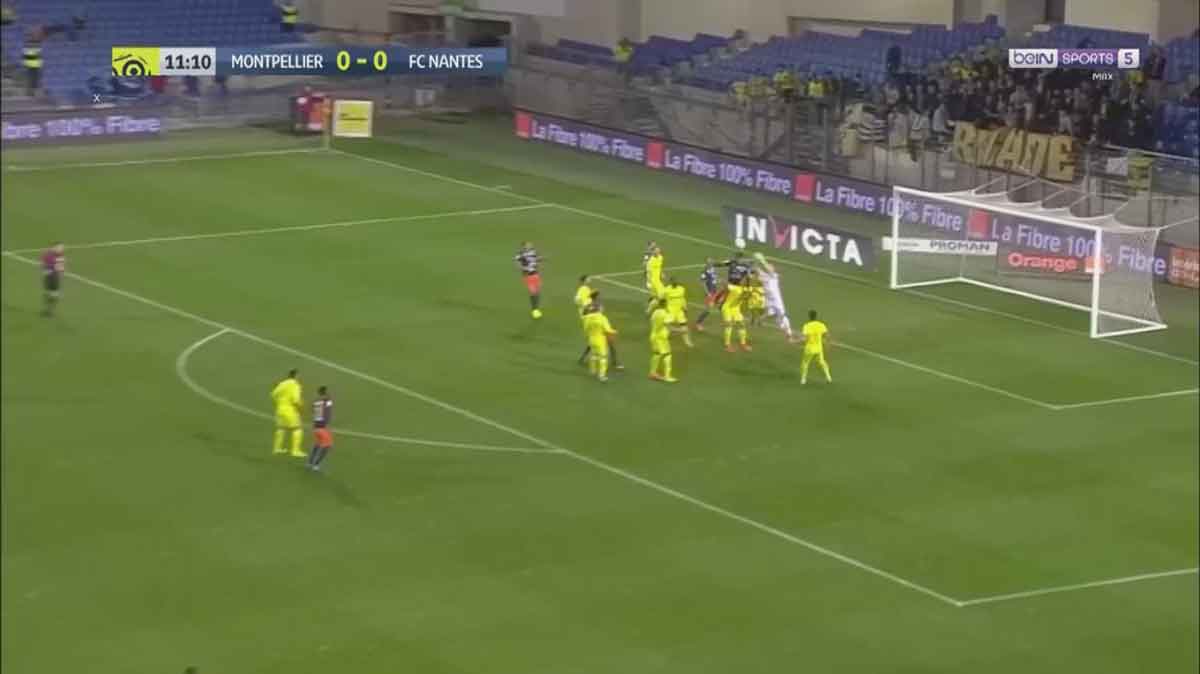 And he showed his prowess from dead balls again in that game, with a beautiful free-kick from the edge of the box.

He whipped it over the wall and into the top-left corner from the right of the box. It was unstoppable and would give opposition players fear of giving fouls away anywhere near their own goal. 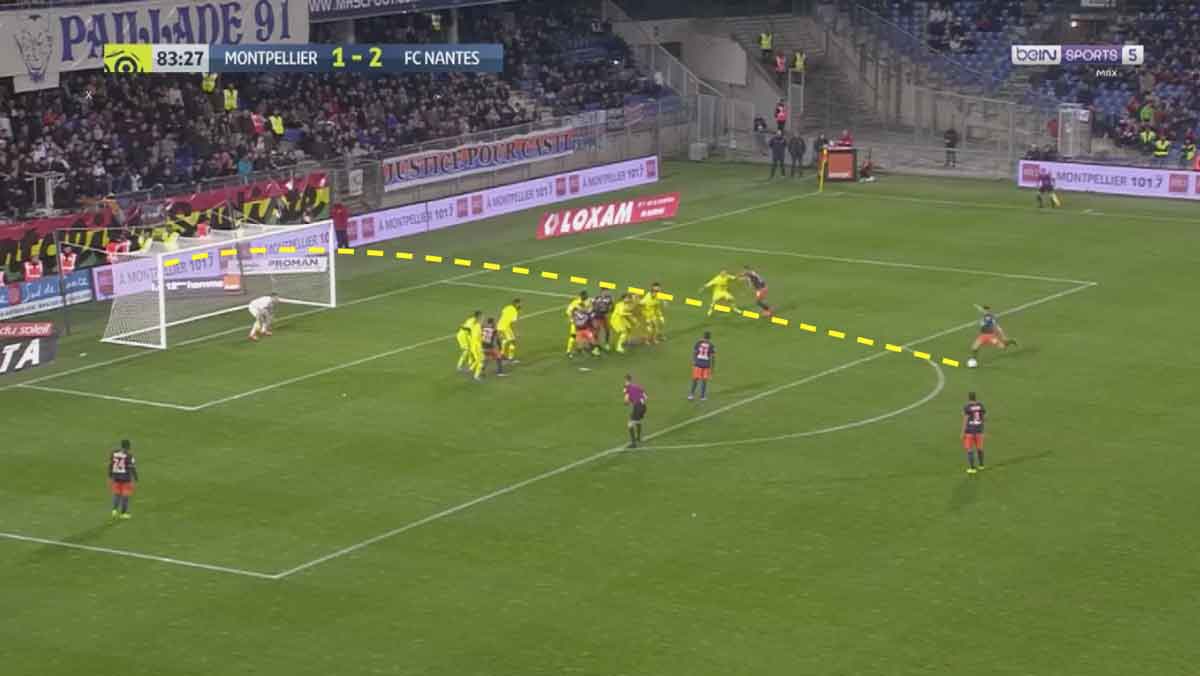 But it’s not all about passing, as we alluded to earlier. He is clever and has really nifty feet too.

Against Bordeaux below, you can see how he uses his pace to get there ahead of the defender, before flicking it over his head, collecting the ball on the other side, shimmying past another defender and finding himself in a good area in the box. 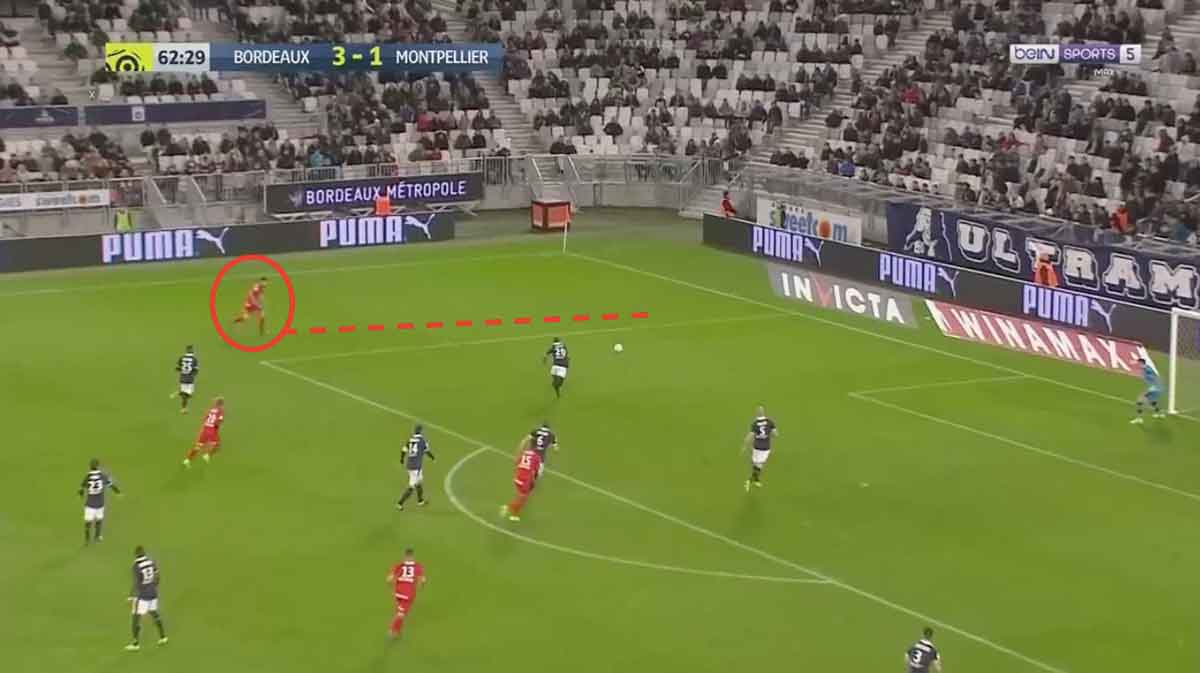 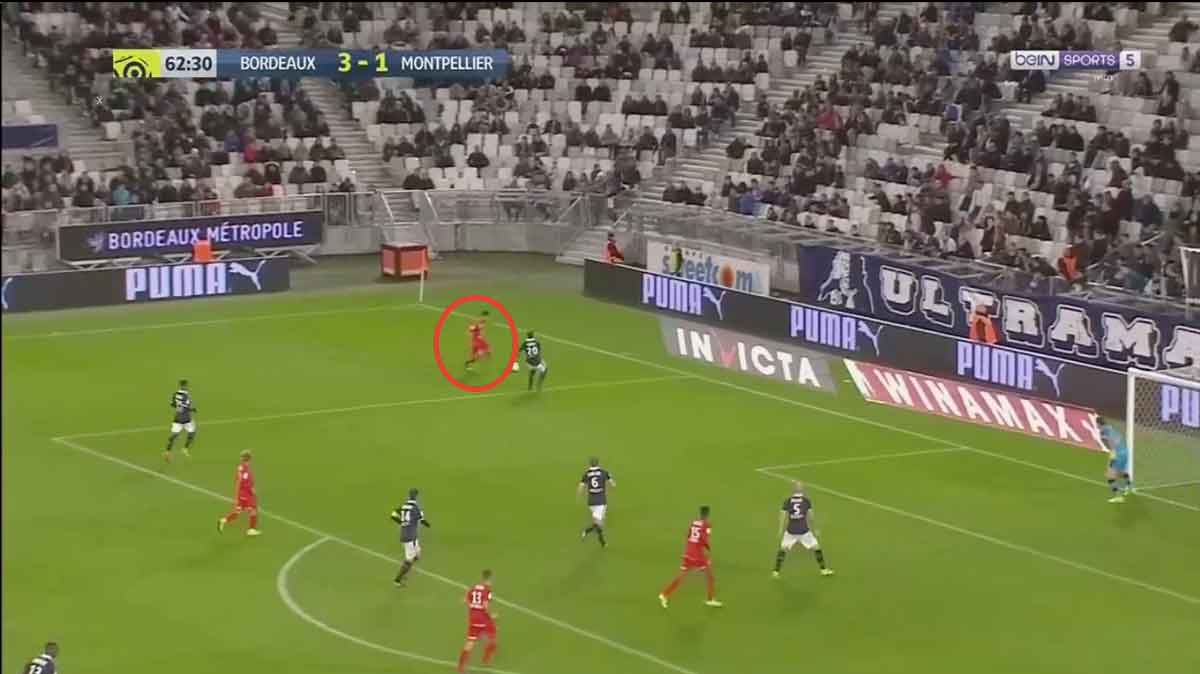 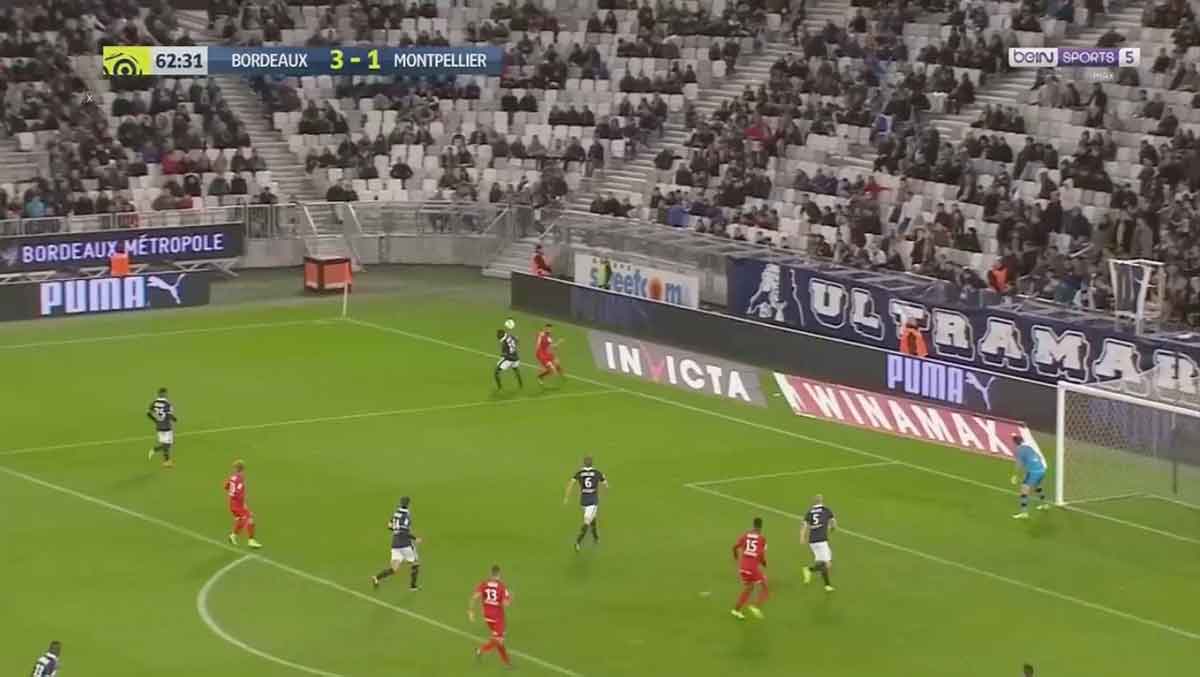 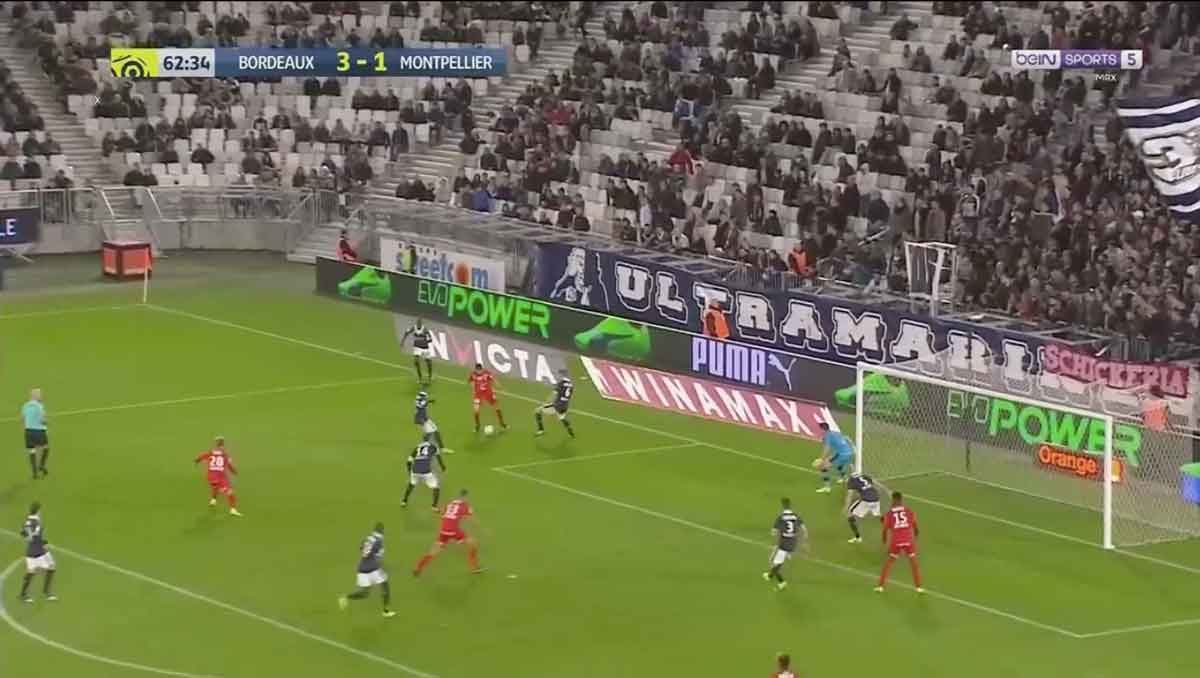 He may have only won a corner but he was just a lazy challenge away from winning a penalty.

At 27, you would imagine it’s his last big chance for a move to the Premier League.

Boudebouz was hugely impressive in Ligue 1, a league that Monaco showed last season shouldn’t be underestimated at all. 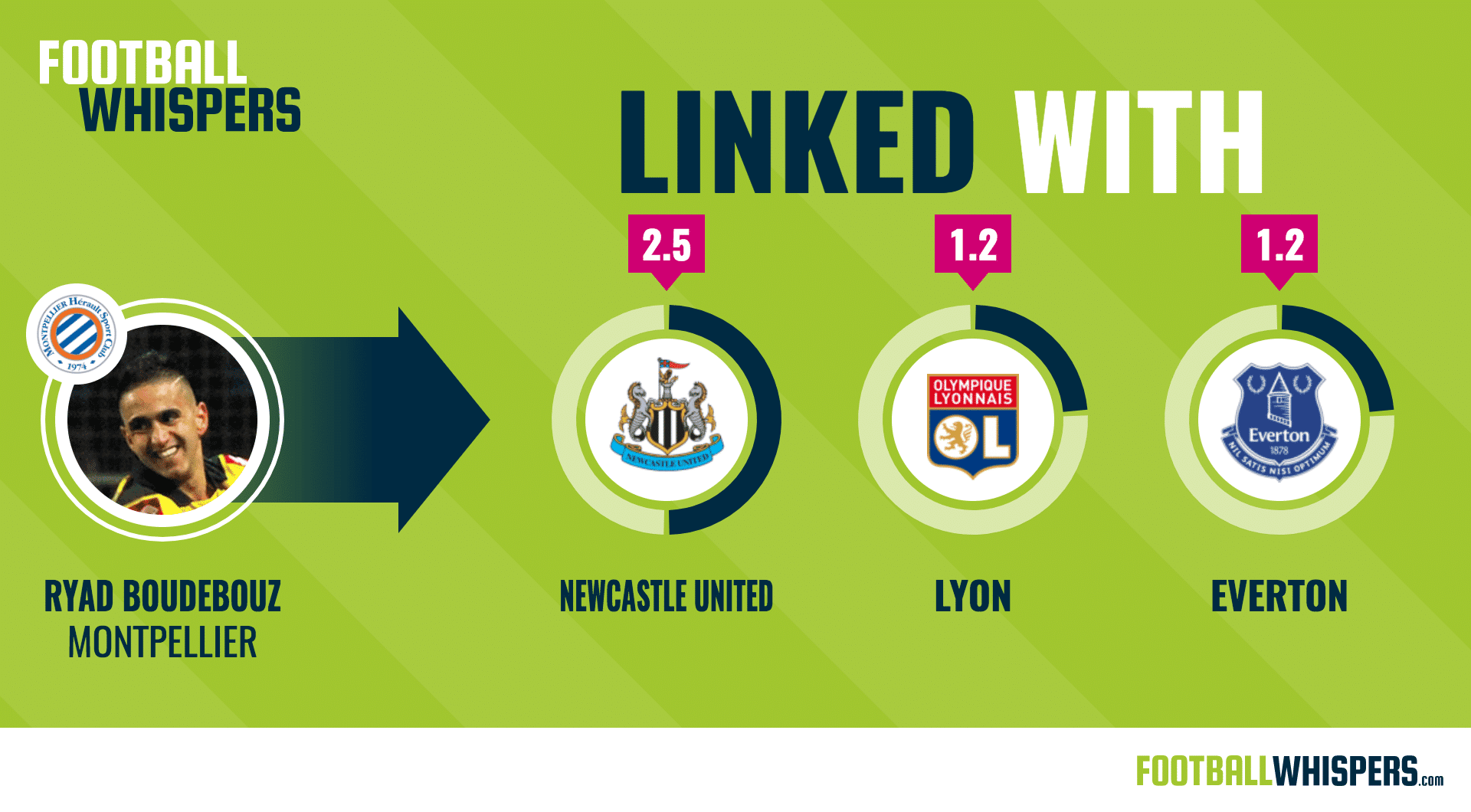 He was available for £5million last winter and you wouldn’t expect his price to have risen that much, although DZ Sport claims Montpellier may want £15million.

Despite the big-money arrivals in England of the likes of Bernardo Silva and potentially Benjamin Mendy, the best signing of them all could well be a relatively cheap move for Boudebouz.