“Chelsea, Liverpool, Juventus, were all clubs that my name had then been linked with, contacted by. Everyone wanted me, but not everyone could get the paperwork in order. I did it (joining Genk) for my development, not the biggest club. I have to play at my age and progress.”

It's not often you hear about a youngster rejecting the advances of Europe's elite in order to play football in the Belgian League but Leon Bailey did just that. The Jamaican winger revealed this after putting pen to paper with Genk back in 2015.

It was refreshing. He backed his own ability and believed these clubs would return for him later on his career but this time he'd be a starter in their eyes.

And his gamble paid off. According to reports, Chelsea, Manchester United and Arsenal are interested in the 20-year-old.

The Bundesliga outfit rejected a £20million bid from the Blues last month. they value the winger at closer to £50million. If he keeps progressing at the rate he is then that fee would soon look to be a bargain.

Chelsea were perhaps trying to unsettle Bailey but this is a player who has spent his entire life being courted by some of Europe's biggest clubs. He's used to the attention and he's only going to entertain offers if they help him develop as a player, and not boost his bank balance.

But Bailey, who is good friends with Manchester City's Raheem Sterling, did reveal this week he would favour a move to the Premier League.

He even has a club in mind, although he was tipped-lipped when discussing it with German newspaper Bild.

“Of course I have a dream club, but I will not tell,” he said. “Basically, England was and still is my dream. And if I keep working hard, I’m sure it will work someday.”

Born in Kingston, Jamaica, in 1997, Bailey made the move to Europe at the age of 13. He ended up at Austrian club USK Leube Anif – now known as FC Liefering after being bought by Red Bull Salzburg – and Craig Butler, his adoptive father, was appointed as head scout.

Bailey had trials with Genk, Standard Liege, Anderlecht and Ajax but due to European laws which state they can't sign non-Europeans under the age of 18, the teams weren't prepared to risk being sanctioned for signing him.

However, after undergoing a trial at Ajax, the then Amsterdam Arena club’s boss Frank de Boer sounded impressed and it was clear he would've been snapped up had they been allowed: “We tested him in different areas. In speed and agility he was already better than some guys of the first team. He’s so fast it’s not normal. His speed in combination with his technique is very rare. Exceptional. He has no weak points.”

Bailey did eventually seal a move, joining  Slovakian side AS Trencin. After just four months though he secured a move to Genk with the Belgian's paying €1.4million. At the end of the 2015-16 season, Bailey was rewarded for his impressive showings as he claimed the Belgian Young Footballer of the Year award.

Bailey's 2016/17 form resulted in a host of clubs attempting to pry him away from Genk during the winter window. Ajax had a bid worth £10million rejected and Paris Saint-Germain were told that their £8million offer wasn't enough. Chelsea and Leicester City were linked in the media but bids failed to materialise.

It was Bayer Leverkusen who did enough to tempt Genk into selling. An offer of €14million plus future add-ons was enough and Bailey made the move to Germany.

The Jamaican's current contract runs until 2022, and includes no buyout clause meaning he won't be cheap.

He's been arguably the club's best player this season, with eight goals and four assists in eleven starts, and they're well on course to finish in a Champions League position.

What are Bailey's strengths?

The best way to describe him would be to call him a modern day wide forward. He can play across the front, operating comfortably on either flank but his best position right now is on the right. His style is aggressive and he looks to isolate players and really attack them.

He's got quick feet, a bag of tricks and explosive acceleration. But he doesn't rely on his pace to beat players. He's intelligent, has great spatial awareness and has the vision of a playmaker.

There's also a bit of Arjen Robben about him. With a dip of the shoulder he cuts inside onto his left foot and curls the ball home before the opposition have time to react. It's obvious what he's going to do but it's difficult to stop. You can see it in the images below. 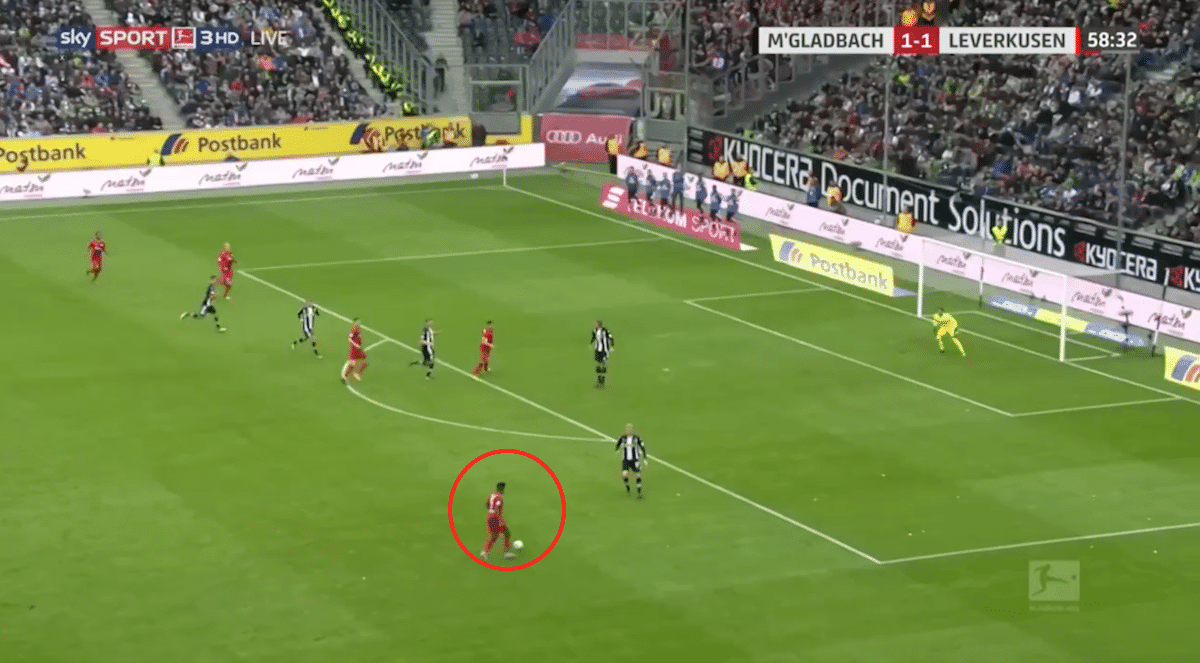 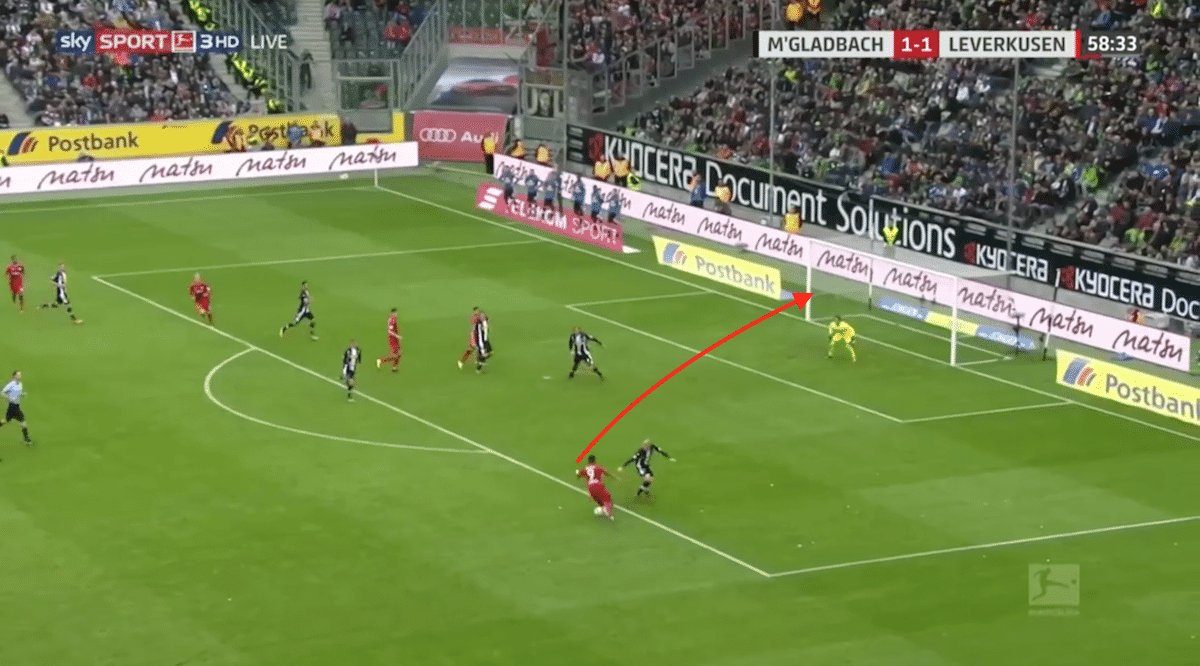 Bailey, circled in red, isolates the player ahead of him and has space either side to attack. In this scenario many would attack the space out wide and look to work the ball into the area with it being four vs four in the penalty area. A driven cross could cause chaos.

The 20-year-old feints to go to his right and unbalances the defender. He then, with a twist of his hips, cuts back onto his left foot and smashes the ball home without breaking stride. This finish really was Robben-esque. The opoosition have issues because if they show him the wide area he's quick enough to get past most players and then get the ball back onto his left foot in the penalty area. It's a risk and not one many would take. 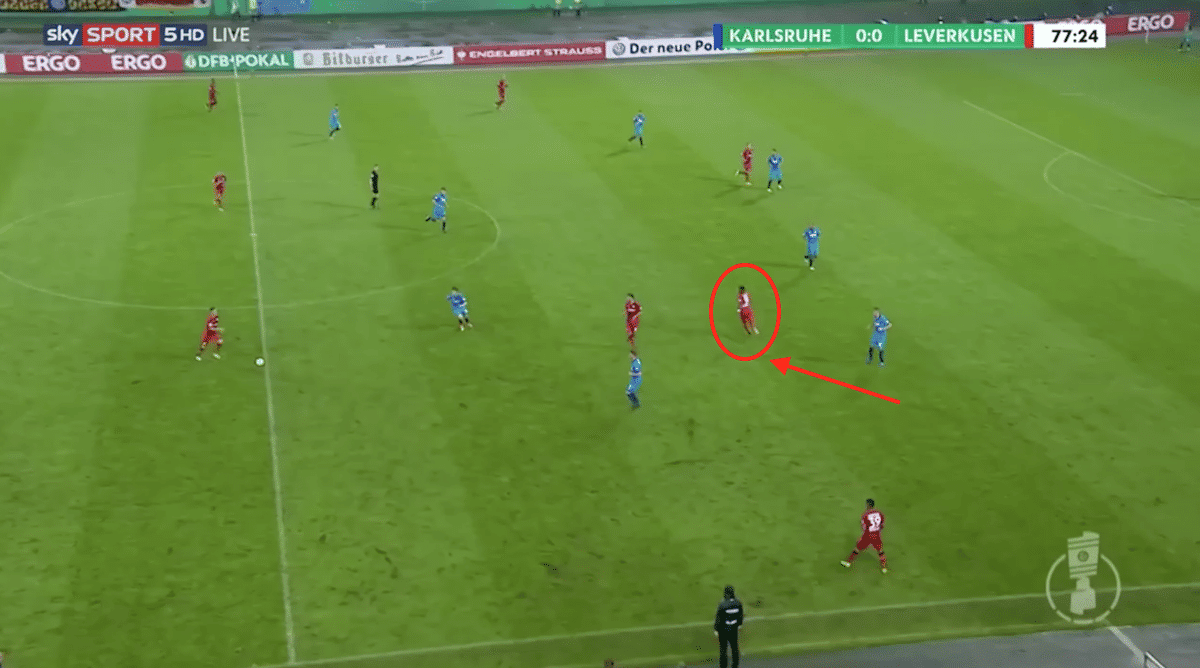 In the picture above you see Bailey, circled in red, in the centre of the pitch having drifted in from the right side of the pitch.

The fact Benjamin Henrichs, a one-time Manchester City and Liverpool transfer target, has pushed on high to occupy the space on the right. 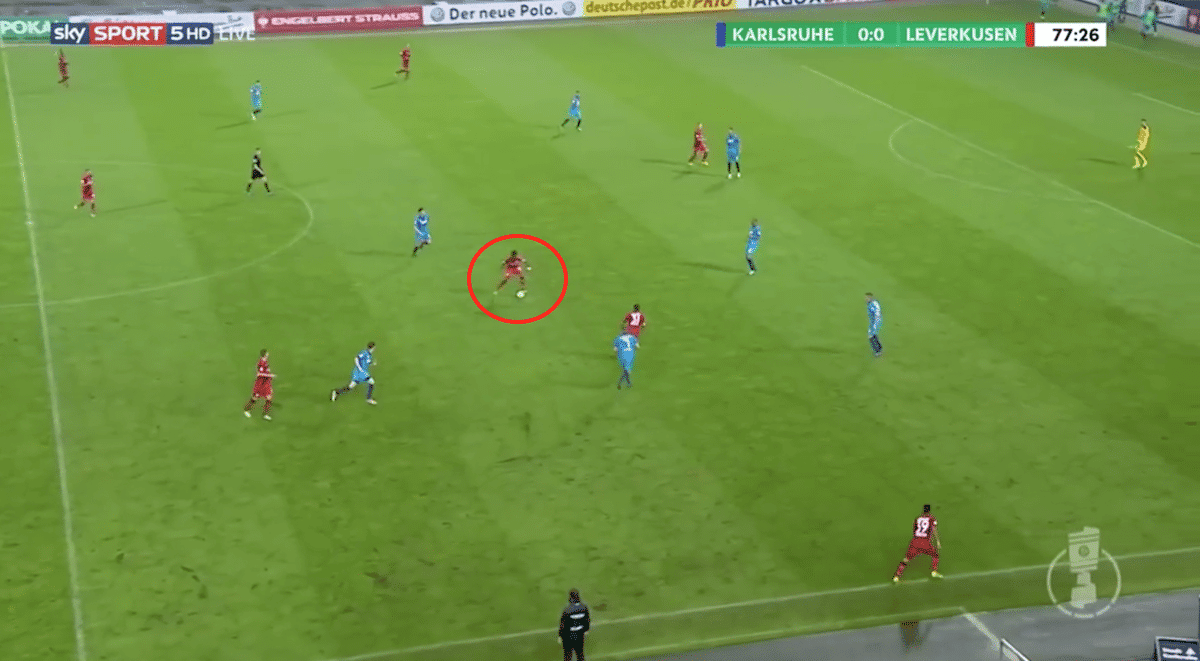 A Karlsruhe midfielder pushes on from the line to press the man in possession and leaves a space. Bailey is aware enough of this to drop even deeper and exploit this area. The ball reaches him and he's already on the half-turn which allows him to face the opposition's goal with fewer touches.

Bailey could play a pass to Henrichs on the right but this would allow Karlsruhe to keep numbers in the middle of the pitch. 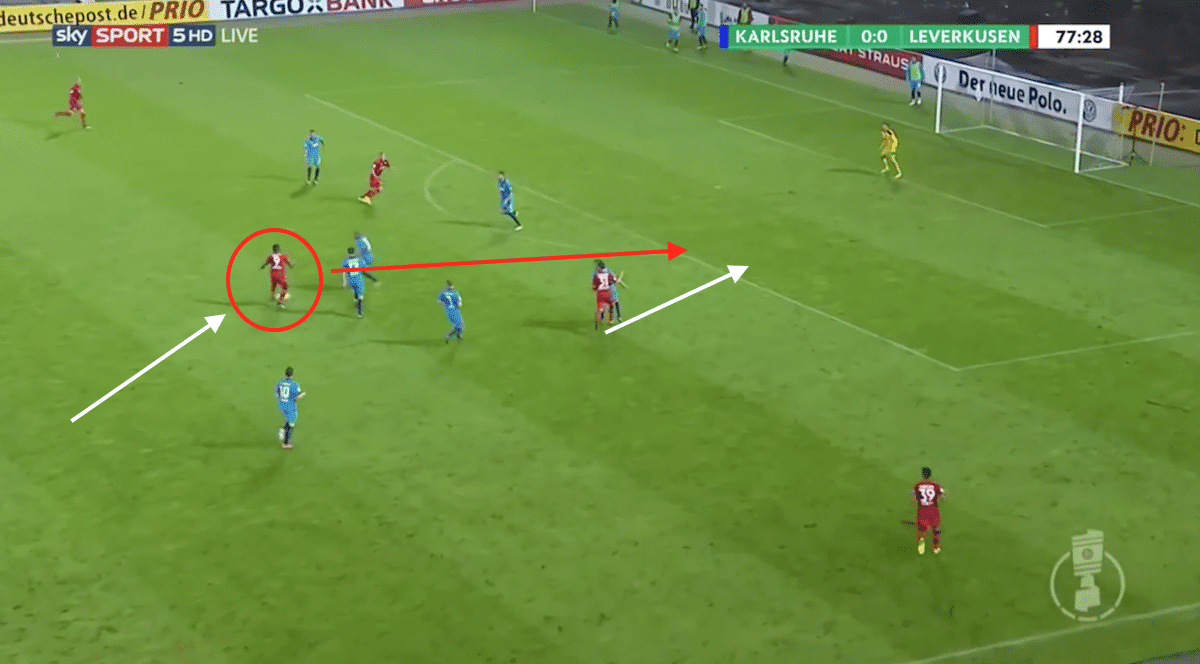 Instead he drives into space and takes three players with him. This leaves Dominic Kohr one on one with the left-back and Bailey threads a ball through the players and into his path.

That sort of player is invaluable when you're up against teams determined to sit deep and control the space. Bailey has the dribbling ability, completing 1.9 per 90 minutes, to beat players and stretch the opposition even if they're usually a disciplined and organised defensive unit.

What are Bailey's weaknesses?

Like all young players his decision making is something he can improve on. However, this comes with experience, there's no quick fix for it and patience is necessary.. For now, though, he can be infuriating to watch. 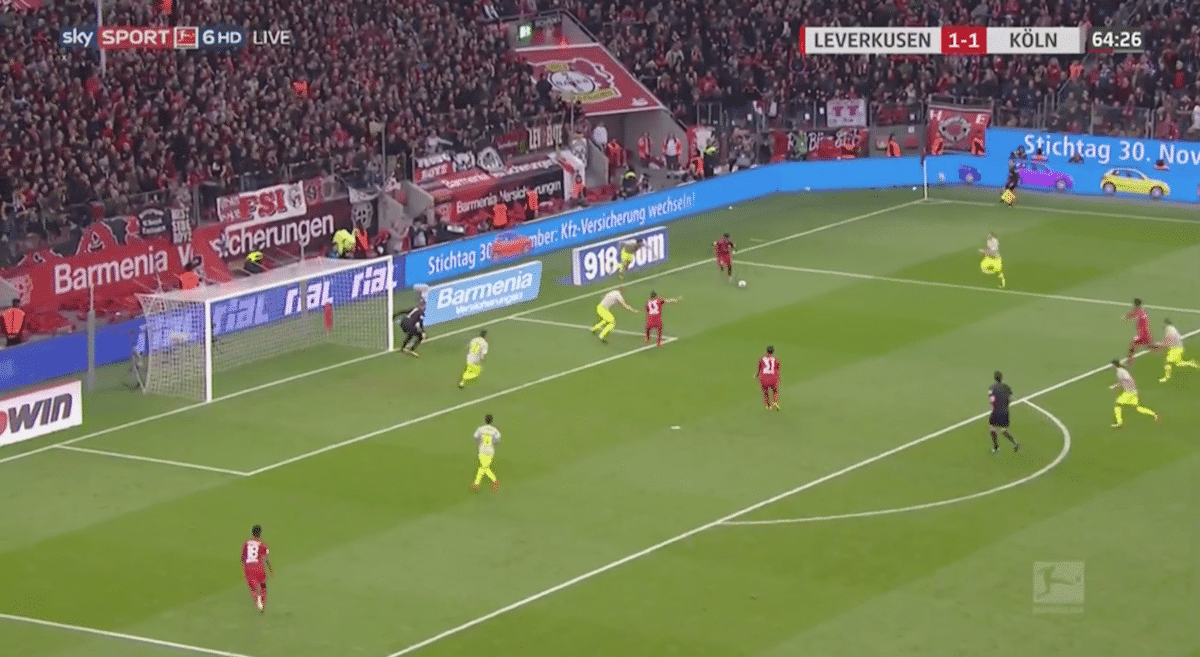 After good work to wriggle free in the penalty area, and put the Koln defender on his backside, he's in a good situation. All he has to do is roll the ball back to Kevin Volland, just beside the penalty spot, and the striker has a perfect opportunity to put the home side ahead.

Alternatively he could float the all to the back post with Wendell in space and the goalkeeper on the opposite side of his goal. Two good options.

Unfortunately for the hosts Bailey doesn't pick either. Instead he takes a shot and the good opening isn't fully exploited. Timo Horn saves the ball and it's easily cleared.

You would imagine so. It's the Bayern Leverkusen model. They buy young, develop them and then sell the players on for a fairly reasonable price. Bailey has the all the traits to excel in the Premier League and would suit all of the top six clubs in England.

Barcelona and Real Madrid need to start planning for life after Lionel Messi and Cristiano Ronaldo respectively. Even Bayern Munich could throw their hat into the ring with both Robben and Franck Ribery coming to the end of their careers.

Bailey is going to be a man in demand. Justifying his decision to reject those moves before he signed for Genk back in 2015.