The 19-year-old Ivory Coast international finalised his move to Glasgow earlier this month after the Hoops agreed a fee for the player with Russian club Krasnodar.

Celtic fans can be forgiven for knowing little about their new signing, and the relatively small fee that their team has forked out for the youngster could lead many to believe that this transfer is not one they should be getting too excited about.

But that view would be misguided, as once again the Bhoys might just have unearthed a rough diamond ready to be polished into a high-quality star, much like they did with Virgil van Dijk and Ki Sung-Yeung, and are currently doing with Moussa Dembele.

We’ve studied footage of Eboue in action to put together an in-depth analysis of what Celtic fans can expect when their latest signing takes to the field at Parkhead.

Eboue signed for Russian Premier League outfit Krasnodar in 2014, but didn't make his senior debut for the club until the final day of last season, playing a full 90 minutes in the 1-0 win over Amkar Perm.

After being in and out of the team during the early stages of the current campaign, a string of impressive displays in the Europa League has cemented the teenager’s place as a regular starter in the centre of Krasnodar’s midfield.

Eboue’s form has been so impressive that he earned his first international call-up in November last year for Ivory Coast’s World Cup qualifier against Morocco and friendly against France, but remained an unused substitute in both games.

When analysing Eboue’s game, it’d be easy to categorise him as simply a defensive-midfield destroyer, capable of breaking up play and stifling opponents before handing possession over to a more technically gifted team-mate.

But, although he has demonstrated phenomenal positional awareness and proven himself adept at shielding the back four, Eboue has much more to his game that.

Deployed at the base of Krasnodar’s central midfield three, his primary tasks were indeed to ensure that the Bulls’ backline receives sufficient assistance, but he also loves to drive through the midfield zone, where his strength and dribbling skills allow him to shield the ball while breezing past an opponent and looking to pick out a colleague in an advanced area.

In many respects, his style more mirrors that of Arsenal legend Patrick Vieira than a Claude Makelele-esque water carrier — though Eboue certainly has plenty of developing to do before he reaches the level of either.

Despite his tender years, Eboue has a magnificent understanding of how and when potentially dangerous situations are going to develop. This level of anticipation allows him to position himself perfectly to snuff out attacks and prevent the opposition creating potential scoring opportunities.

Where many might recognise when an opponent is about to receive the ball in space and begin to close down the player as he takes his first touch, Eboue reacts much quicker and often either pounces on the player in question before they have the chance to bring the ball under control, or nips in ahead of them to intercept the pass. 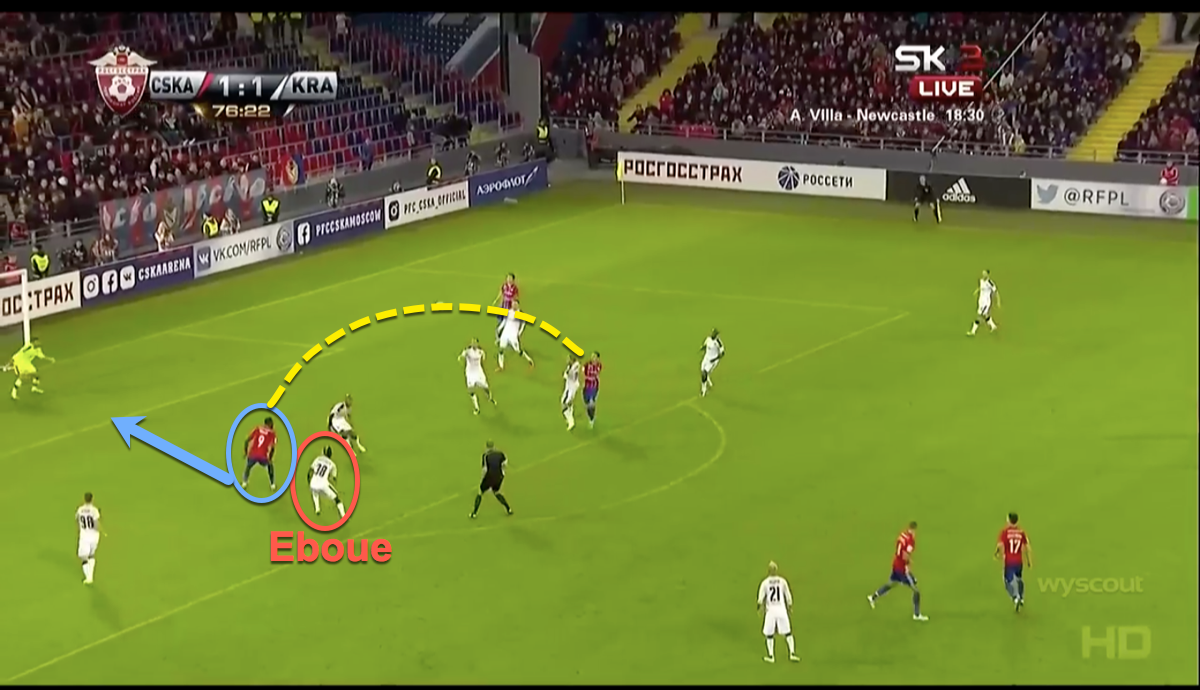 This game-reading ability has seen Eboue rack up an exceptional average of 3.2 interceptions per game in the Europa League this season — by way of comparison, of all of Celtic’s midfielders, only Scott Brown averages more interceptions per European match (four). The young Ivorian’s average in league competition is just 0.8 per game, but this is a reflection of Krasnodar's standing within the division — they currently sit fifth — as opposed to in European competition where then are often underdogs and see less possession. 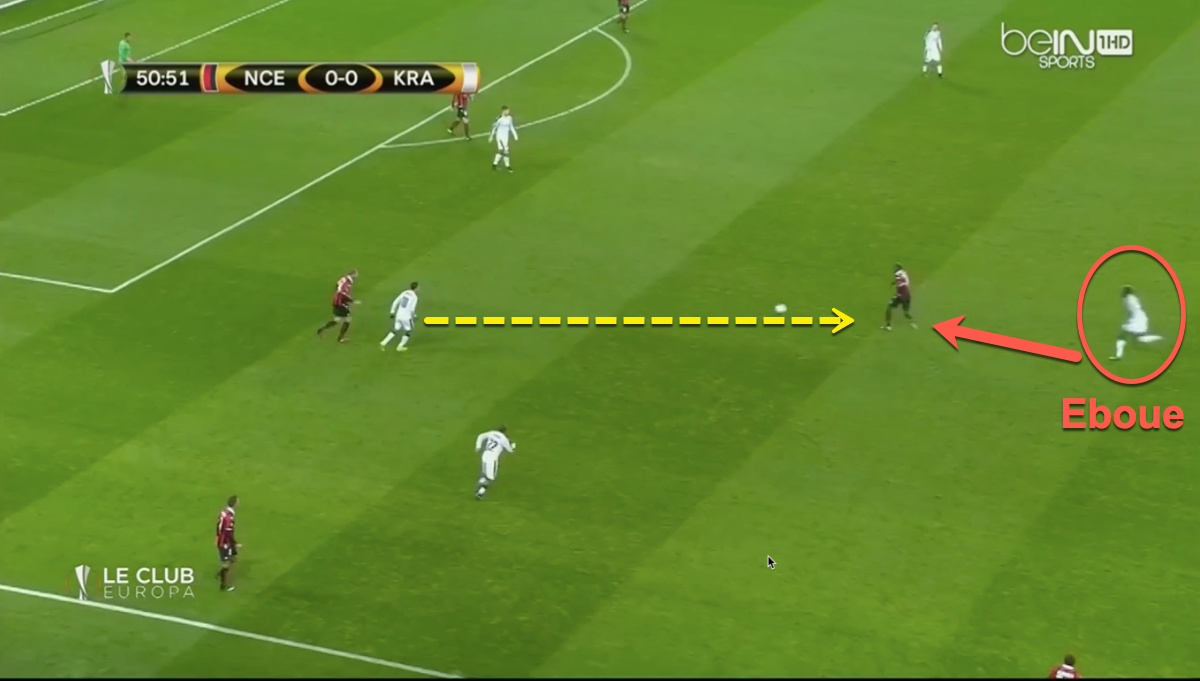 Eboue is also a fine passer, capable of manoeuvring team-mates into attacking position in a way reminiscent of Barcelona’s puppet master in chief, Sergio Busquets. It is the teenager's excellent vision which allows him to spot when a colleague is about to break into a pocket of space, and his rapid execution sees him expertly deliver the ball into their stride. 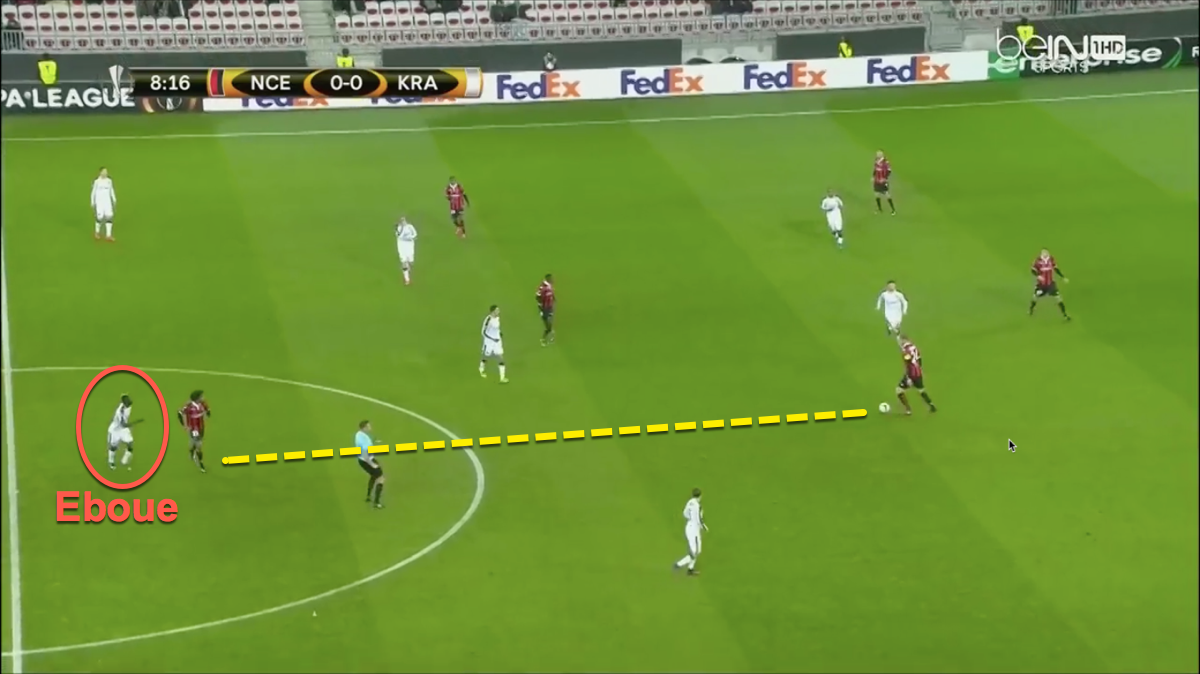 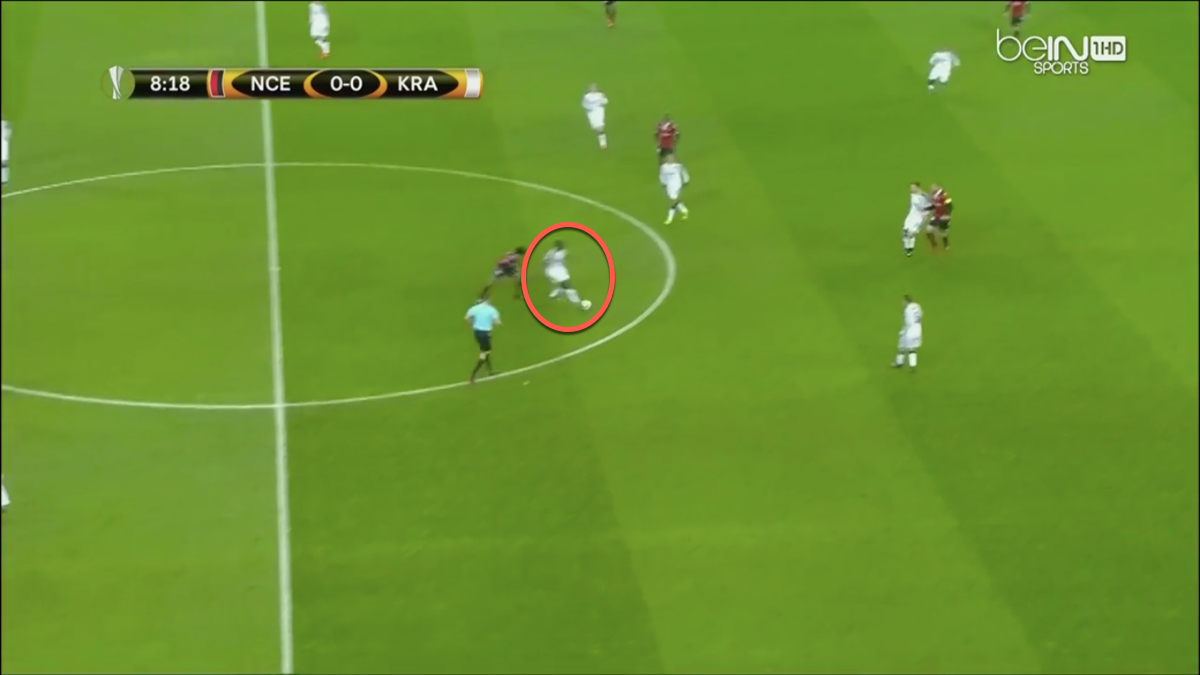 These passing skills come to the fore when he works in conjunction with Krasnodar’s wingers. When Eboue either nicks possession in the middle of the field or bursts past an opposing midfielder, he invariably draws in another member of the opposition, creating space for the wide men to break into, and he then picks them out with aplomb. 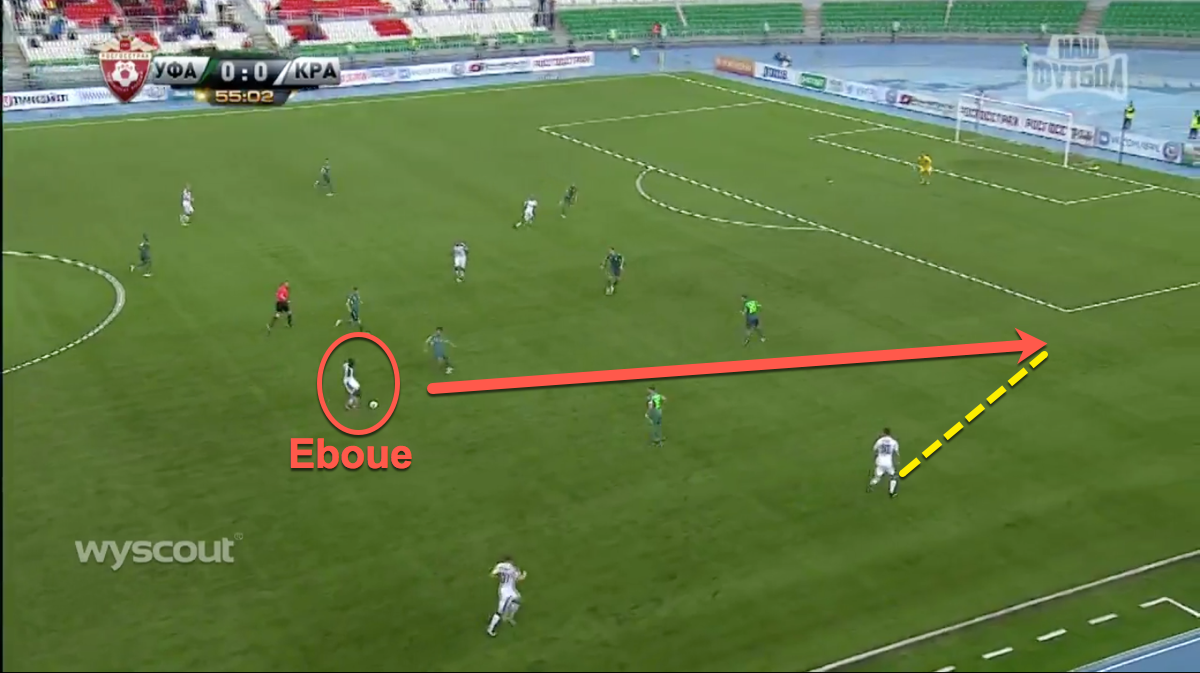 Eboue’s ability to control a game from the middle of the park is demonstrated by the fact that he has made an average of 46.5 passes per game in the Europa League this term — a figure again only bettered by Scott Brown (66.3) among Celtic midfielders — while his pass completion rate of 85 percent is better than that of fellow teenage midfielder Patrick Roberts (84.7 percent).

Like any young player, Eboue has his flaws. The good news for Celtic is that the downsides to his game are issues that are common in up-and-coming footballers, and are easily remedied with time, experience, and good coaching — all of which he will receive in good measure under Brendan Rodgers.

The main chink in the 19-year-old’s armour is that, as is to be reasonably expected of a player of his age, he lacks maturity. This often manifests itself in ill-discipline on the field, as shown by the way he reacted to being sent off against FC Orenburg in November.

Accused of deliberately elbowing an opponent, Eboue protested his innocence and expressed his amazement at the referee's decision by throwing himself to the ground in dramatic fashion, frustratedly pounding the turf as his team-mates attempted to reason with the official. Krasnodar’s Swedish defender Andreas Granqvist intervened when the youngster tried to remonstrate with the referee, pushing him away and ordering him to leave the field.

With less than 20 senior games under his belt, he is far from the finished article, and patience will be required if the Bhoys are to get the best out of him in the near future.

But there can be no doubt about Eboue's talent and immense potential; if managed right, Celtic will have another gem on their hands.