The rumour mill is up and running style as we edge towards the summer transfer window, and you’d need to be living under a rock to have not heard the name Granit Xhaka crop up in recent weeks.

Borussia Monchengladbach’s Swiss dynamo has become one of the most sought after stars in Europe, and many believe that his potential departure from Borussia Park will be the first major move of the summer. Let’s take a closer look at the Bundesliga star. 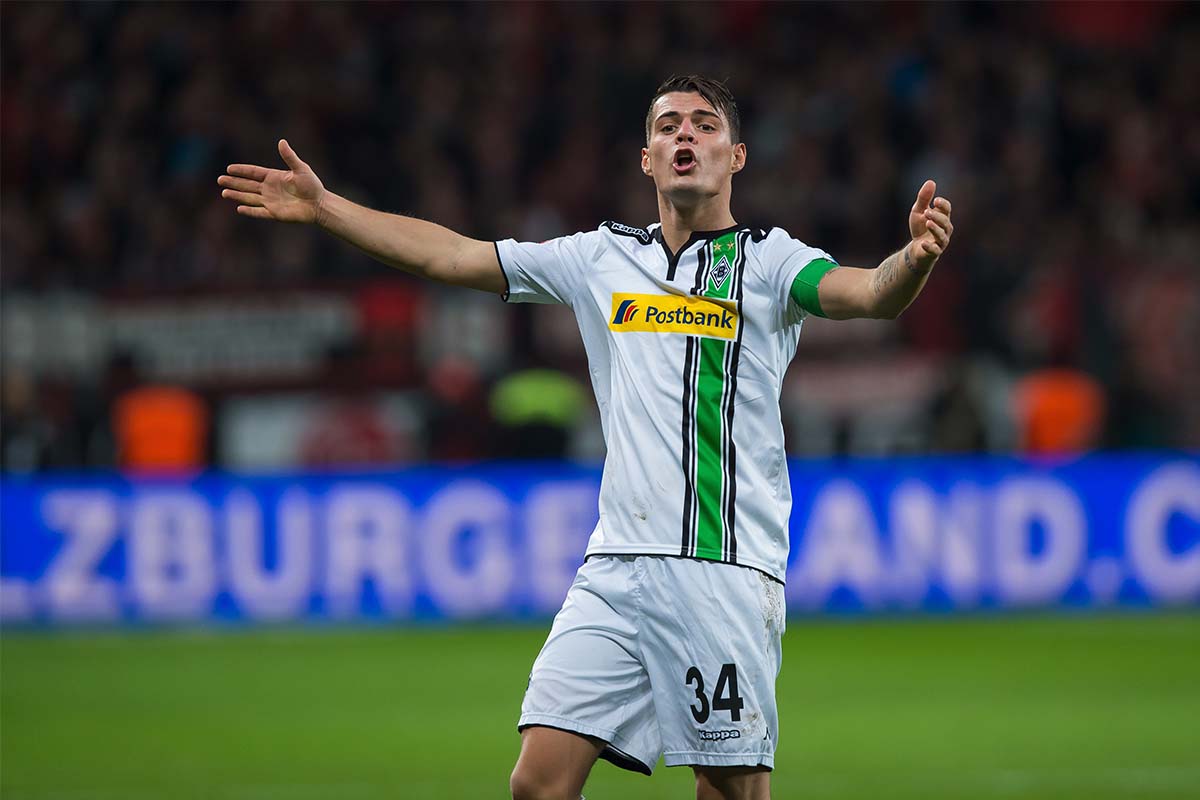 The Story So Far

Xhaka’s Kosovo Albanian parents moved to Basel in order to start a family, and it would prove to be a hugely influential decision for both Granit and older brother Taulant. After starting their youth careers at Concordia, the pair switched to FC Basel in 2002.

Despite conceding two years to Taulant, it was evident that Basel’s senior coaches saw Granit as the future star. Having progressed through the youth ranks at St-Jakob Park, Xahaka announced himself to senior football in emphatic style with a debut goal in a Champions League qualifier against Hungarian club Debrecen. The talented youngster continued to impress over the next two seasons, helping the club to two Swiss Super League and a Swiss Cup whilst also breaking into the senior national side too.

By the end of his second campaign, Xhaka had become Basel’s star man. Unsurprisingly, a number of clubs came knocking and he eventually moved to Germany for a fee of €8.5m. Four years of Bundesliga experience, as well as a foray into Champions League competition, have seen the 23-year-old develop into a truly remarkable talent. A future at the very top beckons.

During his earlier days, particularly at Basel, Xhaka was touted as a future No.10. However, since playing his trade in Germany, the combative 6ft 1in midfielder has found far greater joy dictating the play from a deeper position.

Xhaka’s domineering, albeit sometimes overly aggressive, presence makes the Gladbach star instantly stand out on the pitch. But in truth, it’s his mental reading of the game, rather than those physical attributes that allow the Swiss international to perform to such high standards. He currently tops to charts for both tackling and interceptions at Borussia Park this season, which has been the case for the majority of his four-year German stay.

The 23-year-old’s strengths aren’t limited to winning possession, though. His composure and ability on the ball matches that of almost anyone in world football; Xhaka might not boast many direct assists, but he has often been the architect of starting Gladbach’s attacking plays. Perhaps more importantly, the midfielder has the skill and intelligence to either quicken or slow the tempo depending on what the situation needs. Chipping in with three goals from a fairly reserved roles has been a major bonus, especially as they tend to be long-range screamers.

Xhaka has often been likened to a young Bastian Schweinsteiger, due mainly to comments made by former Switzerland coach Ottmar Hitzfeld. However, his attributes are arguably more akin to a 30-something Paul Scholes; the Swiss star’s passing might not quite match the former Manchester United legend’s, but the ability to control a game from deep is very similar indeed. The only difference is that the Gladbach star can actually tackle.

There’s no doubt that the number 34’s talents have been complemented perfectly by the energetic Mahmoud Dahoud. Even without his partner in crime, the former Basel man would be the perfect fit for any top club that still champions the three-man midfield. After all-round stars that boast the ability to win a ball and dictate the tempo with an 85% pass completion rate are a rare breed.

One of the most exciting elements about Xhaka’s game is that he is already displaying that maturity on a consistent basis. That’s the hallmark of a genuine world-class talent and, at 23, he could be set to dominate for the best part of a decade. He might carry a heft price tag, but Europe’s elite will almost certainly be eager to complete a deal. 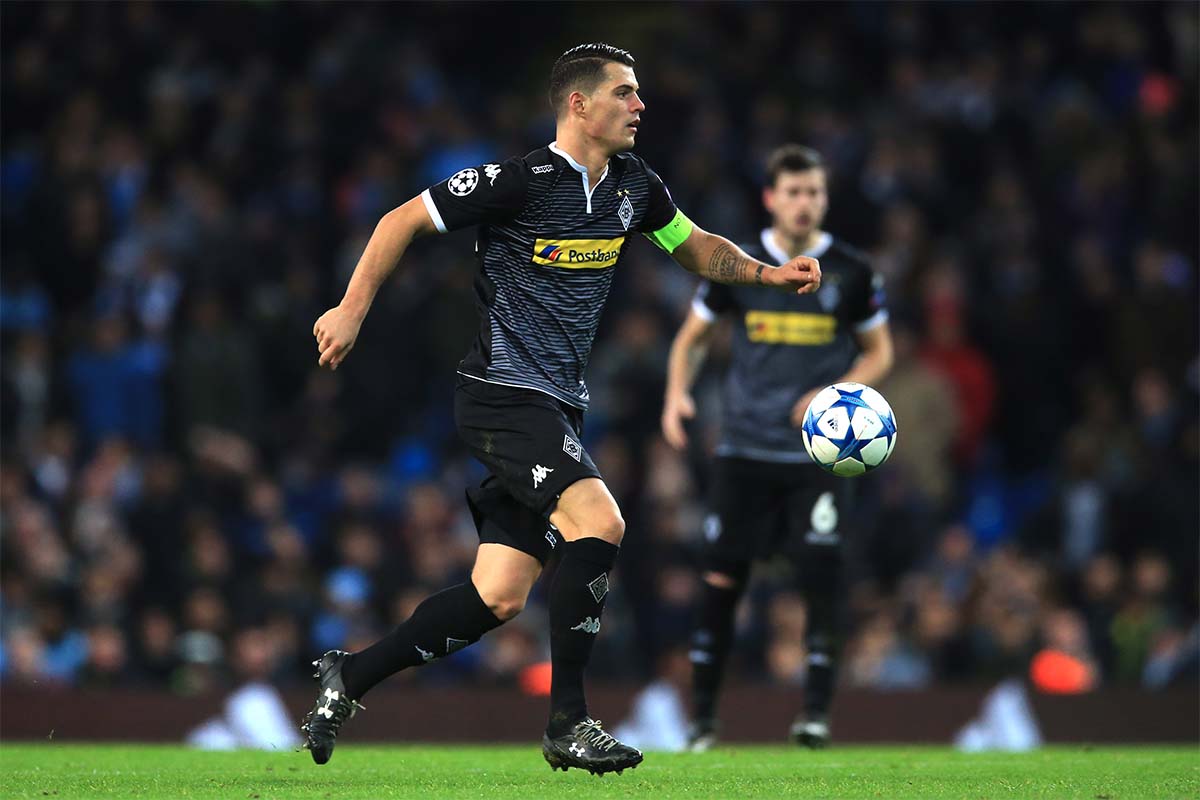 If word on the grapevine is to be believed, it’s virtually guaranteed that Xhaka will be trading Borussia Park for a new destination this summer. But where?

Premier League side Arsenal are the favourites right now. Talk of a move has already been running for several week and it’s believed that the Gunners have already tabled one official bid for the 23-year-old star. Arsene Wenger’s men are desperate for a midfield star of this ilk and calibre, and it seems that they are prepared to do anything to land their number one target.

The Gunners will face stiff competition, though. Xhaka is firmly on the radar of Bayern Munich, perhaps as a long-term successor to Xabi Alonso. Meanwhile, a number of other top European clubs will be monitoring the situation with eager eyes.

Die Fohlen may yet hold onto younger teammate Dahoud, but keeping Xhaka looks almost impossible. One way or the other, it should be one of the biggest talking points of the summer.