Much of the talk about Swansea City's midfield has centred around the future of Icelandic playmaker Gylfi Sigurðsson. But the Swans have quietly gone about pursuing a £10million deal to sign Las Palmas midfielder Roque Mesa which is believed to be close to completion.

The tough-tackling midfielder was one of Las Palmas' stars of season as the Canary Islanders finished 14th – well clear of the relegation zone in their second term in the top flight.

Who is Roque Mesa?

Born in Telde, a short drive down the coast from Las Palmas, Mesa joined Levante's youth team and made his senior debut for Les Grantoes during the 2007/08 season.

Brief stops with Huracan and Tenerife B followed before he switched to Las Palmas' B side in 2011. He has not looked back since, helping the Los Amarillos win promotion to La Liga in 2015.

Mesa's form for the Canary Islanders has even earned him comparisons with Barcelona's World Cup-winning midfielder Sergio Busquets.

What would Roque Mesa bring to Swansea?

If a comparison with all-conquering Barça midfielder Busquets isn't enough to whet the appetite then the fact he recovered the ball more often than any other midfielder in La Liga last season should underline his credentials.

In the still below he gets tight to the Osasuna receiver from the throw-in forcing him to pass work to the thrower. It takes Mesa two seconds to spring forward and win possession from the visitors' number six too, nullifying the threat completely. 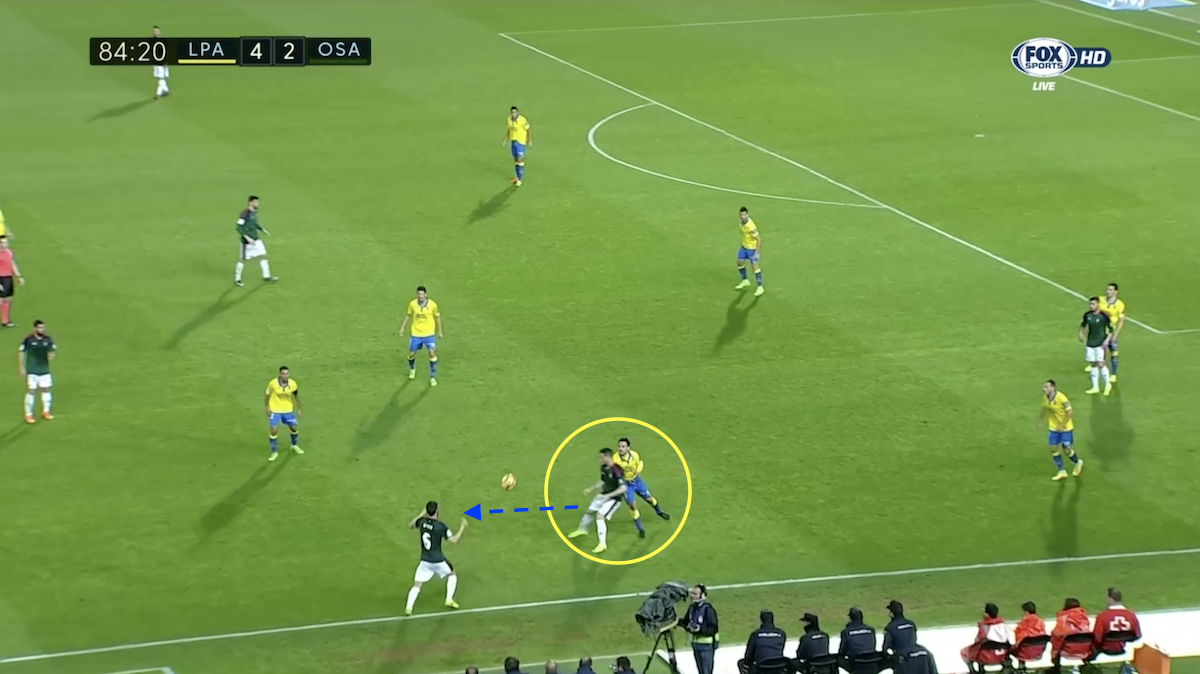 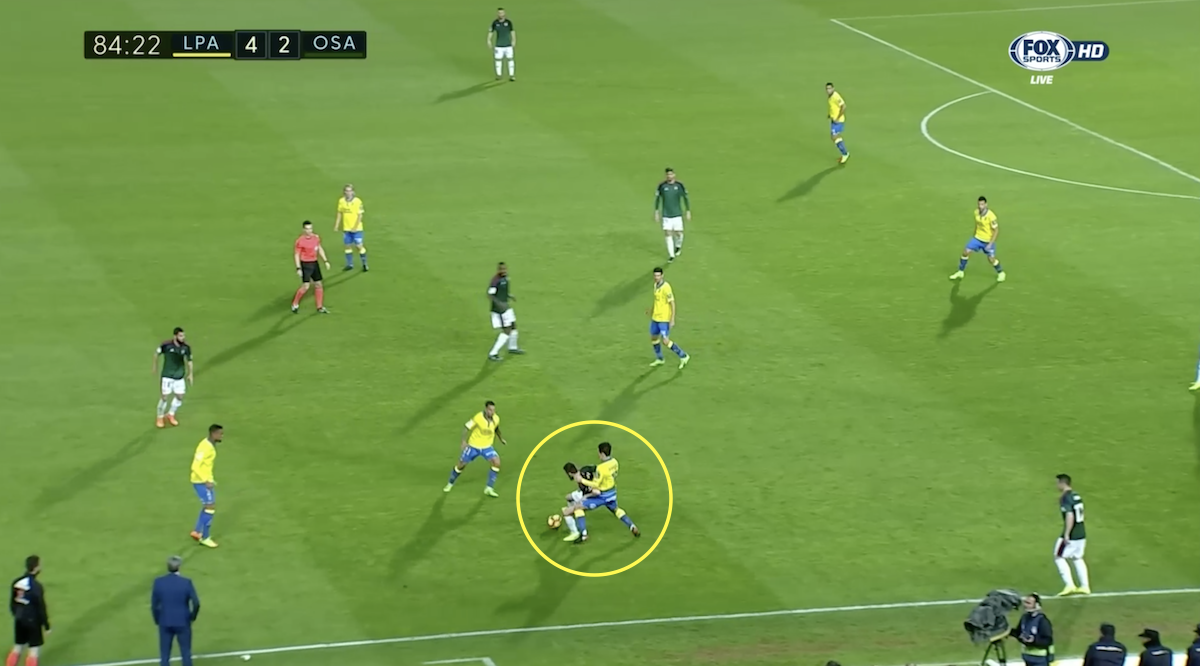 Standing at 5ft 7ins Mesa is not simply a destroyer. There is far more to his game. What he lacks in stature he makes up for in tenacity and his ability to get around the pitch and turn over possession quickly for his team.

There is more to his game than the side without the ball though: Mesa is an iron fist in a silk glove. While he trades on his credentials as a ball-winning midfielder, he is third for passes in La Liga, just behind Juventus transfer target Steven N'Zonzi and Atlético Madrid's Koke with 2,794 attempted from 35 starts. 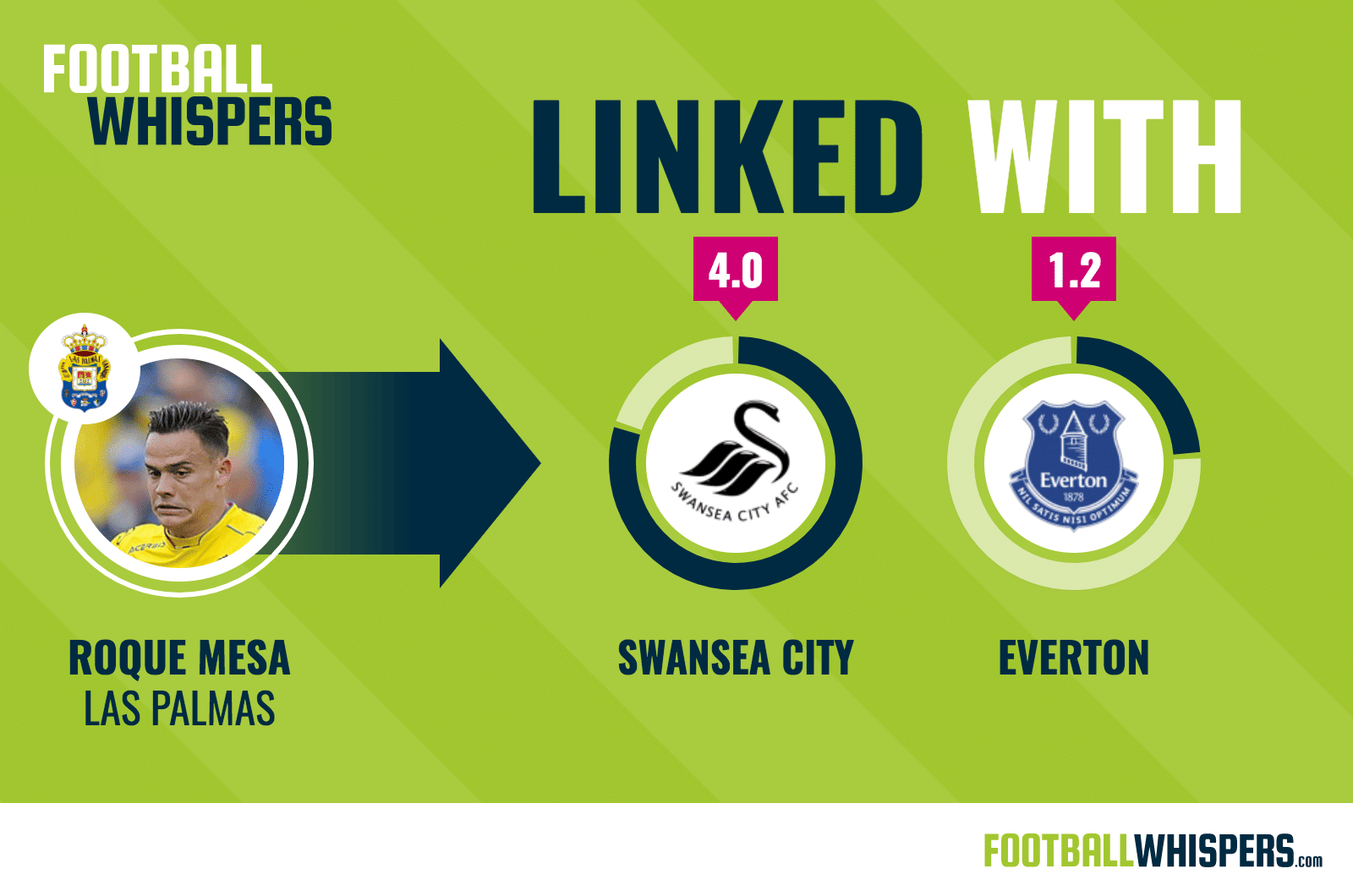 Boasting a 91.4 per cent pass completion rate, the fourth-highest in La Liga, he has also attempted the third-most in the division per 90 minutes (70.8).

It isn't that he just keeps the ball moving with simple backwards and sideways either.

As shown below, Mesa has the confidence to drive into a space inhabited by three Real Madrid players only to play the ball inside to the other circled player. 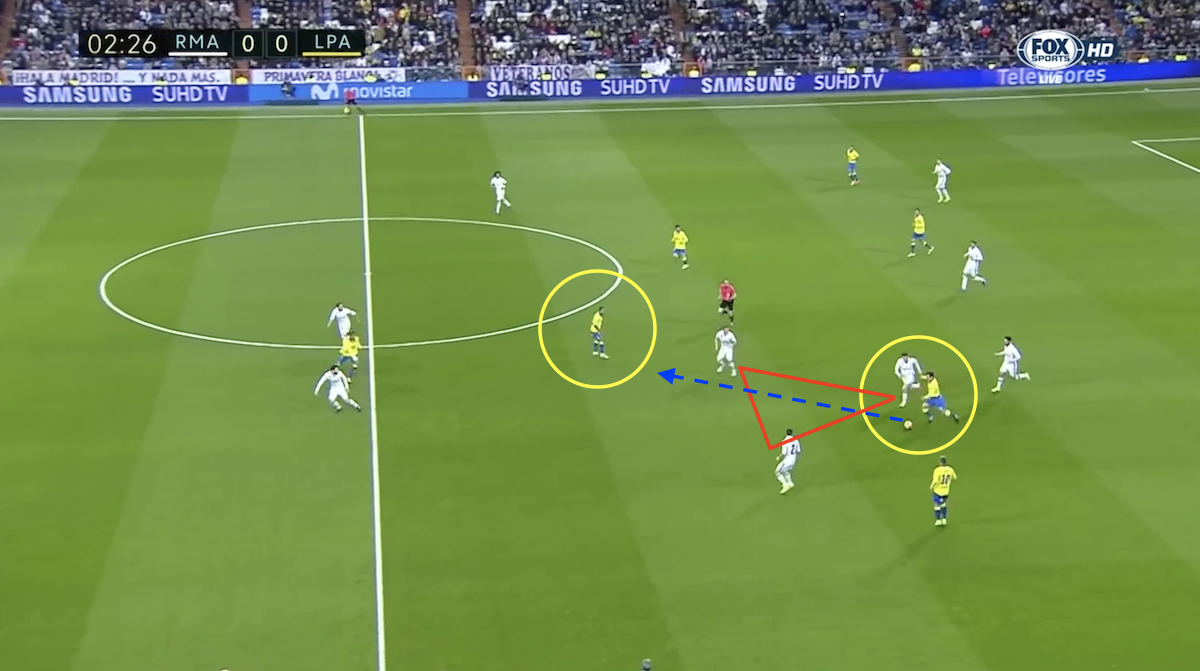 Another example, below, is taken from Las Palmas' game at Osasuna. From his position Mesa could easily have swung the ball into the box and his body shape suggests he is planning to do just that (red line).

Instead, he slipped the ball down the line (blue line) to find a player no Osasuna player is paying attention to and open up a different crossing opportunity. 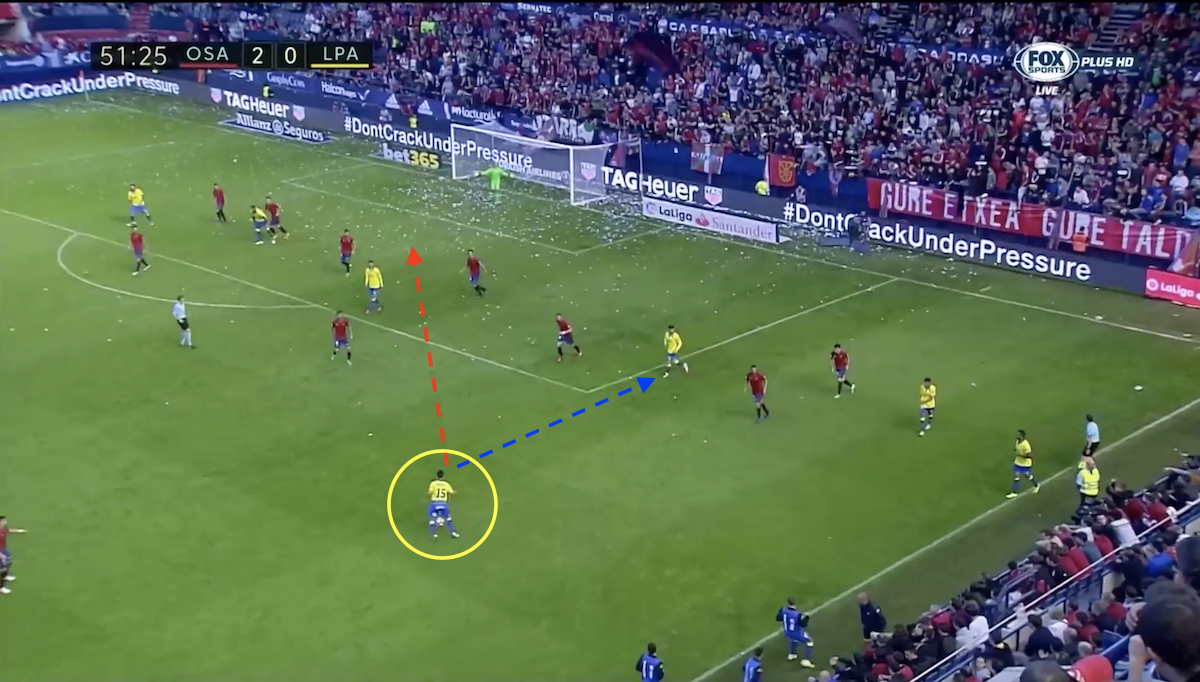 However, if he has a weakness then it is his positioning. Below, against Real Sociedad, he is caught in two minds. He either has to press the ball carrier or drop off and cut off the route to the Sociedad number 11. 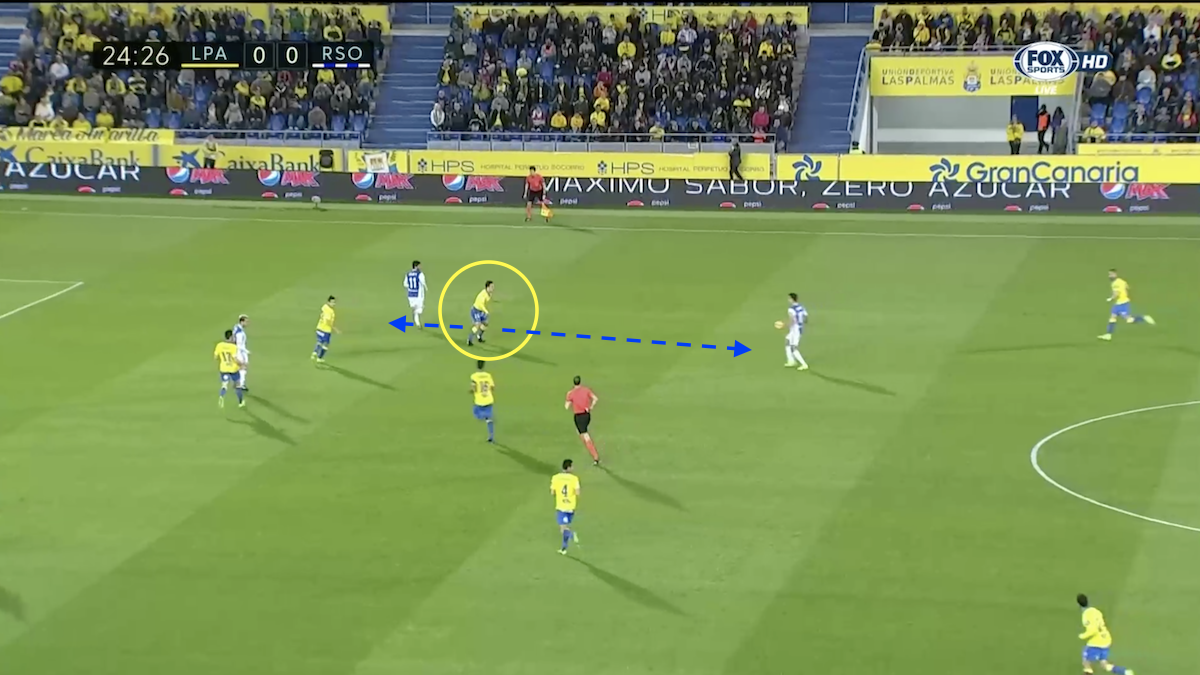 In the event, he does neither and the Sociedad player in possession has the simple task of lofting the ball over Mesa to take him out of the equation. 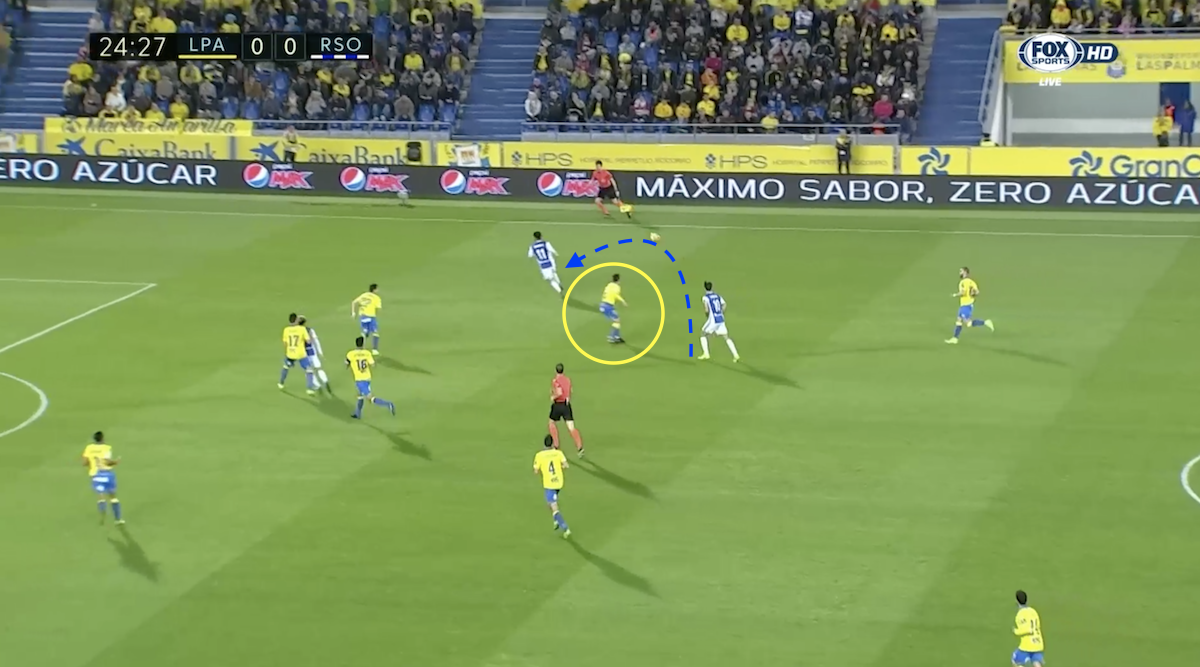 Where would he fit in?

Swansea tended to line up in a 4-3-3 or, less frequently, 4-2-3-1 system under Paul Clement last season. Either of which would suit Mesa perfectly.

At the base of the Swans' midfield was Jack Cork. But the former Chelsea youngster is not a conventional ball-winning midfielder in the same way Mesa is.

The two could be married together effectively in a two-man base of midfield. Mesa would provide the steel while Cork could add some silk with his smooth passing and more adventurous style.

Something similar would work in a three, too, with Mesa playing deepest in a line which could also utilise Leroy Fer.

Much, though, might end up depending on Everton transfer target Sigurðsson. The Toffees saw a £30million bid for the Icelander turned down. The former Spurs man has tended to play No.10 in a 4-2-3-1. If he departs the Liberty Stadium the Swans might end up switching to 4-3-3 for good.