Backing up Harry Kane at Tottenham Hotspur is an unenviable job. But someone has to do it. Vincent Janssen tried and failed last season and now it could be the turn of Hoffenheim forward Andrej Kramarić.

Manchester United transfer target Kane is the focal point of Mauricio Pochettino's exciting young team. Throw in the small matter of 75 Premier League goals in the last three seasons and it's not hard to understand why.

But Dutch international Janssen flopped horribly last season, scoring once from open play in the Premier League, and is likely to be moved on over the summer. So a higher calibre deputy is required if Spurs are to mount a proper assault in Europe and domestically.

According to Bild, Kramarić, who scored 15 times in the Bundesliga for Hoffenheim last season after joining from Leicester City, could be that deputy. And we run the rule over the Spurs transfer target ahead of a potential return to England.

Who is Andrej Kramarić?

Kramarić's goalscoring knack was evident from an early age. Born in Zagreb, Croatia, he signed for Dinamo Zagreb as a six-year-old and plundered 450 goals for the club's various youth teams to become to most prolific scorer in Dinamo history.

A first-team debut against NK Zagreb came in May 2009, aged 18, and Kramarić was promoted to the first team the following season, scoring seven times in 24 games. The Croatian spent the next two seasons on loan at Lokomotiva, scoring 20 times in the Prva NHL.

Having briefly returned to Dinamo, scoring twice in four games at the start of the 2013/14 campaign, Kramarić complained to the press about a lack of game time. That did not go down well with the club's hierarchy and he was soon sold to Rijeka.

The move proved to be exactly what Kramarić needed, though, and he scored 37 times in the next season and a half, form which enticed Leicester City to sign him in January 2015 for a club-record £9million.

But he failed to force his way into the starting XI on a regular basis as the Foxes pulled off a great escape and played just twice in the first half of the 2015/16 season as Claudio Ranieri's side marched to the Premier League summit.

He was loaned to Hoffenheim in January 2016 and scored five in 15 games to help the village side avoid relegation from the Bundesliga. He completed a permanent switch last summer and hit 15 goals as Die Kraichgauer finished fourth. 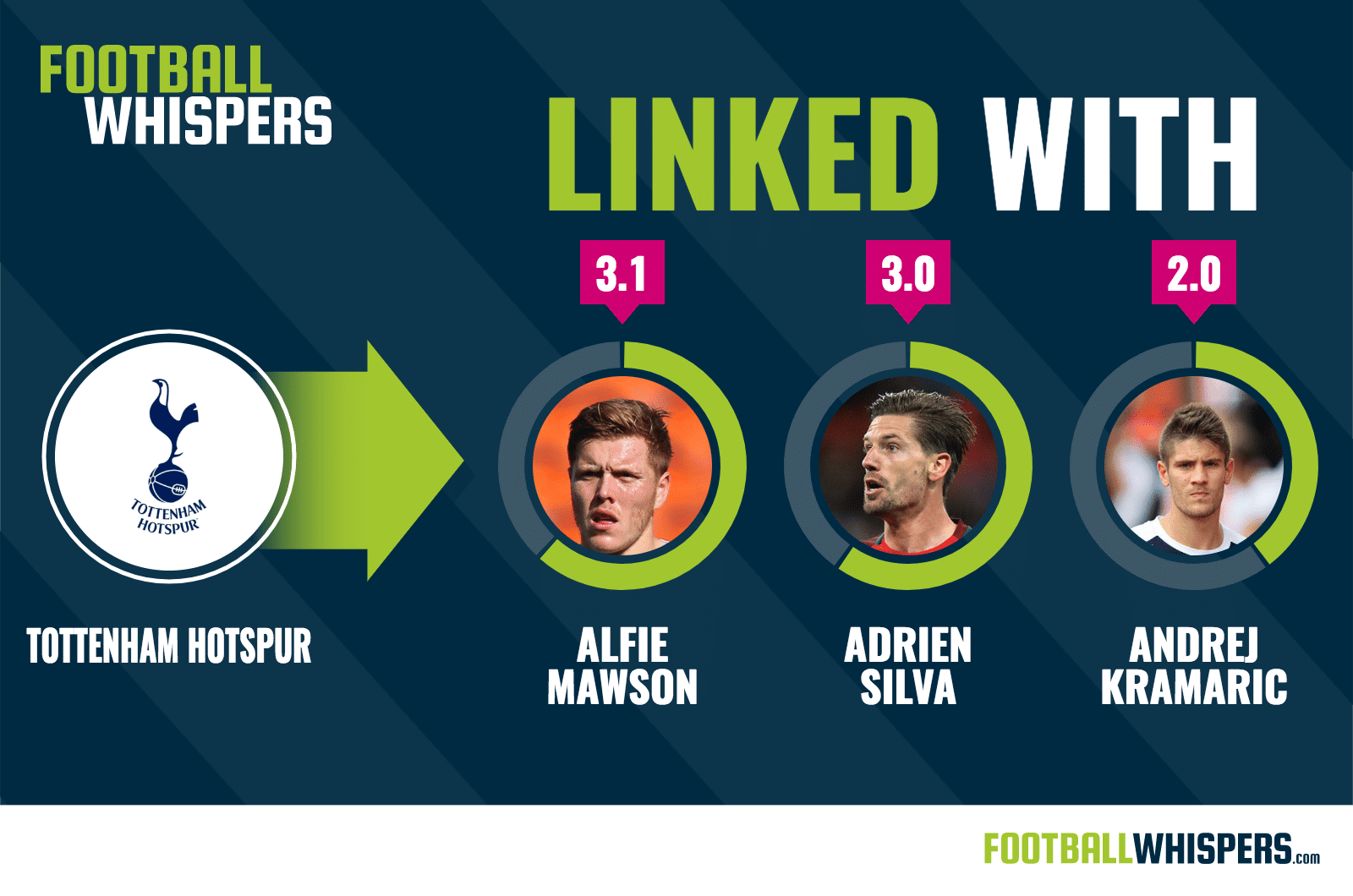 What will Kramarić bring to Spurs?

Goals. And plenty of them. The Croatian is a good finisher who can score from any part of the pitch. From tap ins, penalties and headers, to clever finishes and stunners – such as his effort to seal a historic win over Bayern Munich.

But it is the intuition of his finishing which is most impressive. Cutting in from the left against Werder Bremen after controlling a ball over the top, Kramarić progresses into the penalty area and stands up his marker.

He then opens his body as if he is going to try to bend his shot into the far corner, across the face of goal. But he actually shoots low and hard past Werder keeper Felix Wiedwald at the near post, disguising the effort to leave the home stopper with no chance. 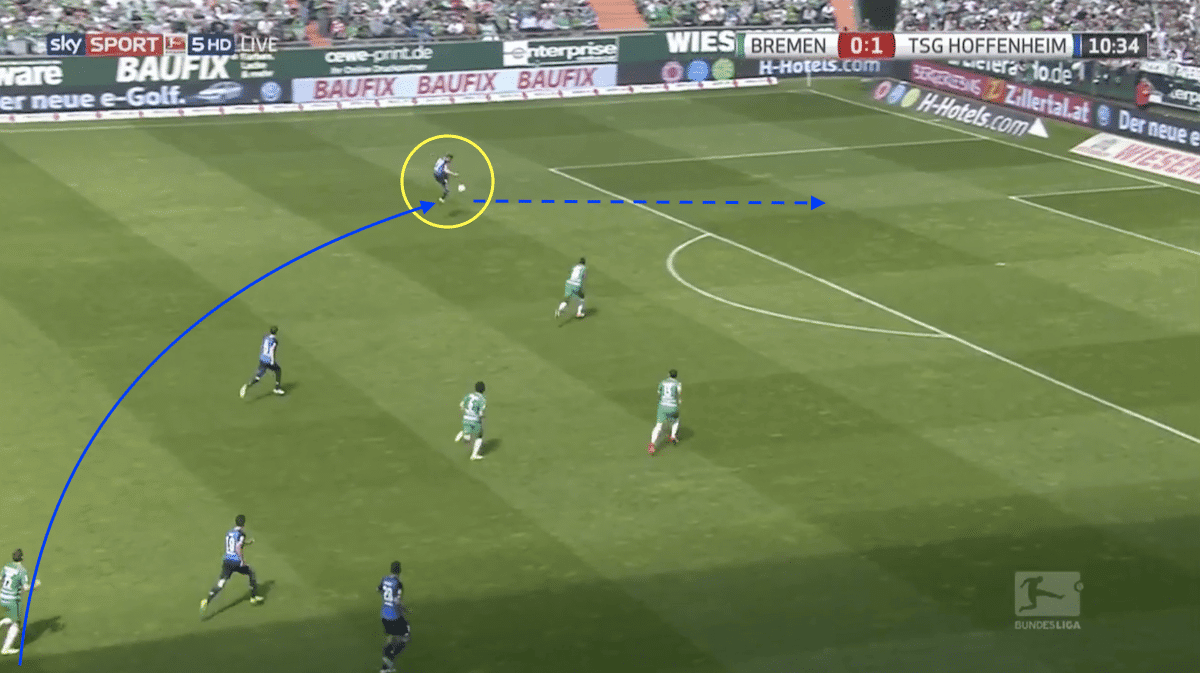 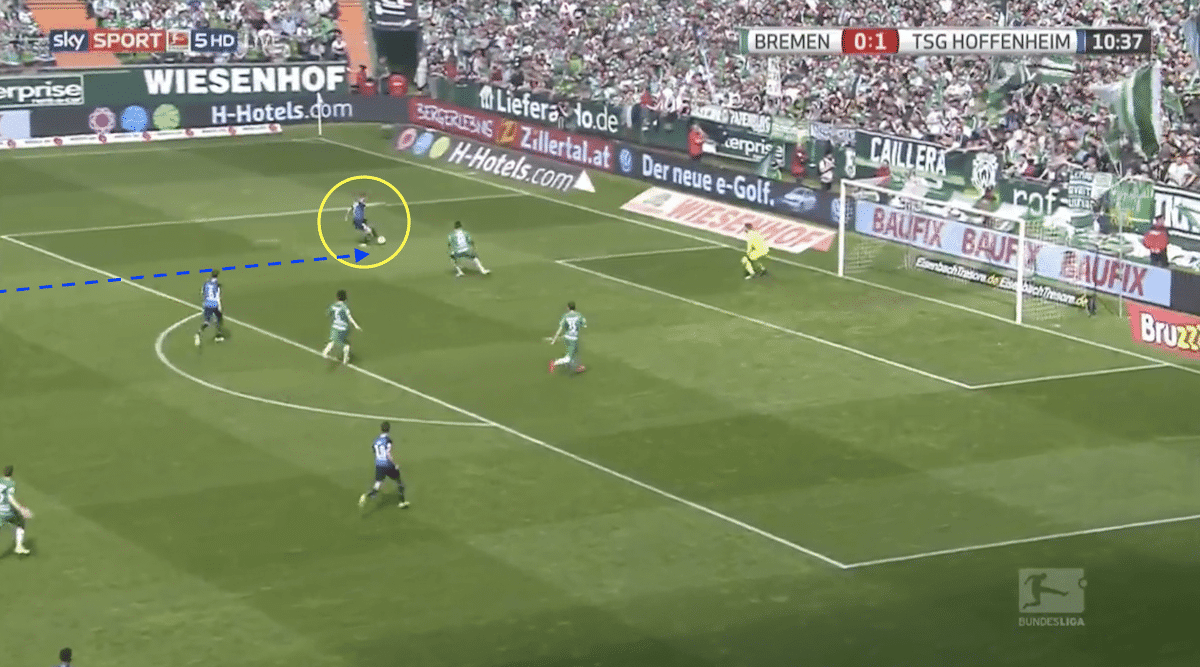 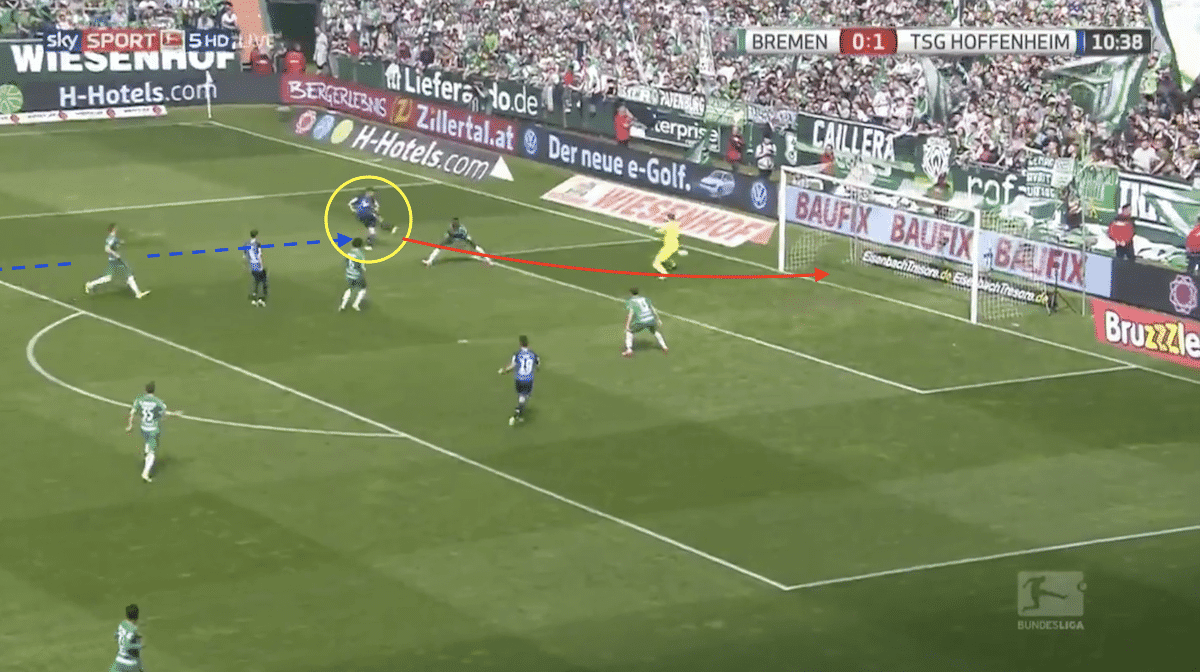 However, the side of Kramarić's game which does not always get the credit it deserves is his ability to set up others too. Much like Kane, he is a well-rounded striker and recorded eight assists last term. Kane provided seven in the Premier League.

He is not a forward who simply lurks in the middle (marked in blue) waiting for his chance. Kramarić is a hard worker and is happy to work the channels and provide for those around him.

Against Bayer Leverkusen he showcases that, using his dribbling ability to get down the line before slinging in an enticing low cross which Sandro Wagner meets to poke home. 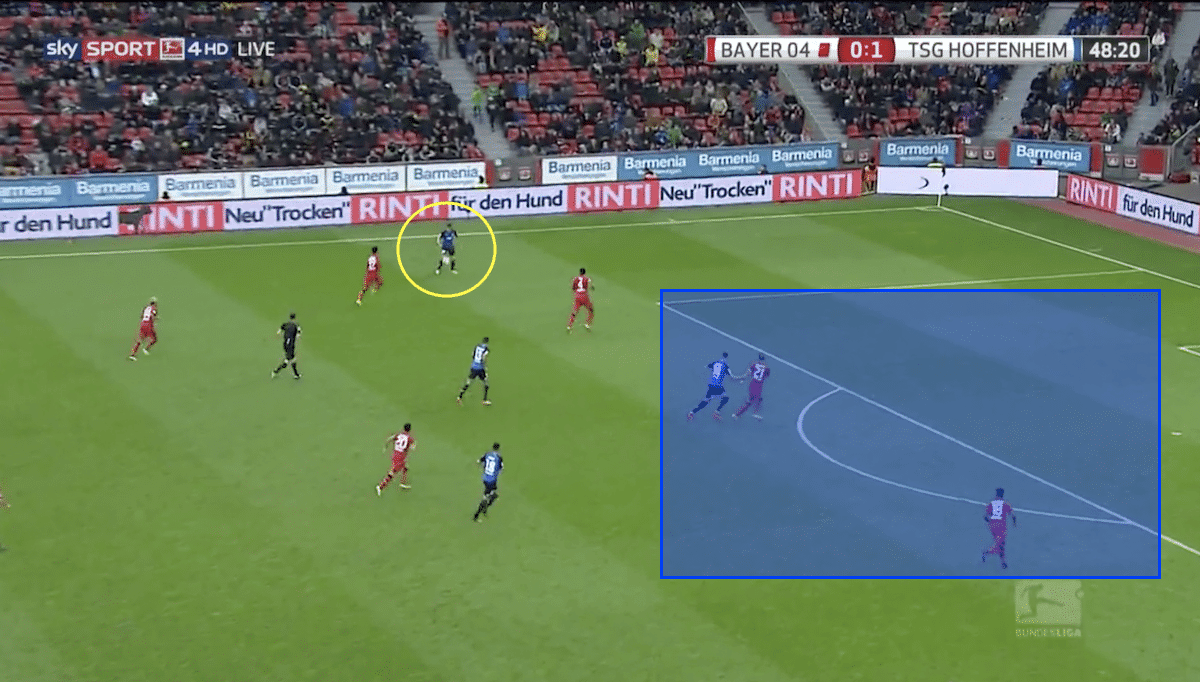 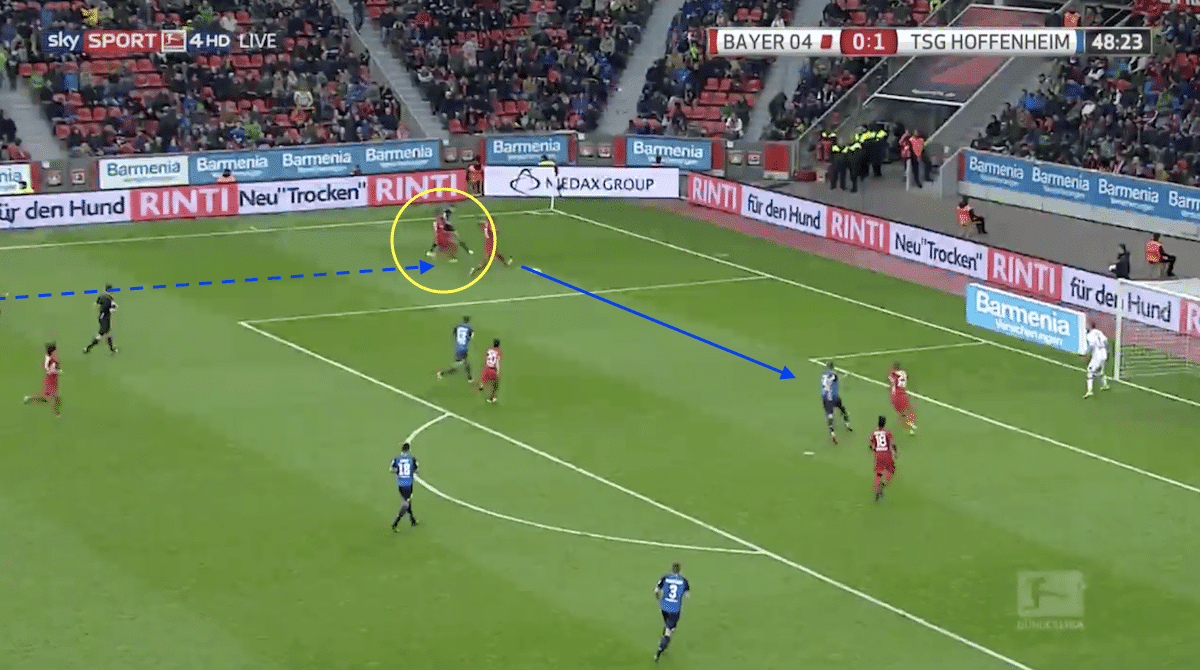 Where will Kramarić fit in at Spurs?

Unless you are Kane, being a frontman at Tottenham Hotspur isn't particularly fun these days. Spurs' No.10 has made the only striker spot in Pochettino's starting XI his own in the last three seasons.

That means whoever arrives at Spurs this summer – Atlético Madrid's Kevin Gameiro is another who has been linked – will have to be satisfied with starting on the bench in the Premier League unless the England man is unavailable or chronically short of form.

That in itself is a hard sell for the club. Going to a prospective signing who has proven their goalscoring mettle in a strong league with the proposition of being Kane's personal back-up is perhaps not the most enticing offer.

But that is what Pochettino will put to Kramarić if the two parties get around the negotiating table this summer. The Argentine knows he needs a reliable deputy for Kane after losing his main man to an ankle injury in the spring.

A repeat is not something Spurs can avoid. Quite simply, it could be the difference between the north Londoners being Premier League challengers once more or taking the next step.