When it comes to discovering young, talented players, honing their innate ability and then selling them on at an eye-watering mark-up, no club truly does it as well as FC Porto.

Since 2002, the Portuguese club have made over €1billion from player sales, and the list of departures is certainly an impressive one: James Rodríguez, Hulk, Radamel Falcao, Jackson Martínez, Alex Sandro and many, many more plied their trade at the Estádio do Dragão before moving on for big money.

“We have to be permanently studying the youth market as this is what allows us to keep fighting, despite having a budget 20 times less in respect to income than others,” Porto's long-serving president, Jorge Nuno Pinto da Costa, has admitted.

But while Porto may have a significantly smaller budget than the powerhouses of European football they – and countless other Portuguese sides – do have on distinct advantage when it comes to signing players from South America, and especially Brazil.

Portugal is viewed as the perfect stepping stone; a country that due to social, linguistic and climate similarities makes adaptation to European football far easier. The work permit issues that hinder several potential transfers to the UK also do not apply.

“I arrived young… only 18 years old,” Rodríguez recalled last year. “At that age you think you know a lot but you soon realise you have a lot to learn. In three years I learned so much about European football because of Porto. It's a big club, one with which you win titles and play in the Champions League.”

This learning curve has been undertaken by countless players who've arrived at Porto. And the latest is Éder Militão, a 21-year-old defender who is attracting interest from Europe's biggest sides.

Manchester United, Real Madrid, Liverpool, Chelsea, Juventus and Barcelona have all been linked with the Brazilian, who only joined Porto in the summer from São Paulo.

Militão has a €50million buyout clause in his contract, a figure several of the clubs could easily meet. However, the player's agent has ruled out a January move.

Giuliano Bertolucci told Spanish outlet AS: “There is no possibility of the player leaving his current club in the winter market.”

Given Militão has, at the time of writing, played fewer than 30 games in European football that is the wise choice. The defender is still getting to grips with a style of football which is very different to that in Brazil.

It's why he was eased into the team by Porto boss Sérgio Conceição. “He is a player who comes from a league that is completely different from ours,” the Portuguese said in August.

“He will need to take time to get a feel for the processes of the team.  When we feel Éder Militão is integrated with the principles and dynamics of the team, he will have his opportunity. ”

Militão sat out the first three Primeira Liga games of the campaign. On matchday four, he was put into the starting XI against Moreirense. Such was his impact, he hasn't missed a minute of league action since.

Given the clubs interested, it won't come as a huge surprise that Militão is supremely comfortable on the ball. He has an excellent range of passing and has demonstrated that throughout the campaign.

Below, in stills taken from Porto's Champions League clash with Schalke, the Brazil international starts an attack with a pinpoint 50-yard crossfield pass. 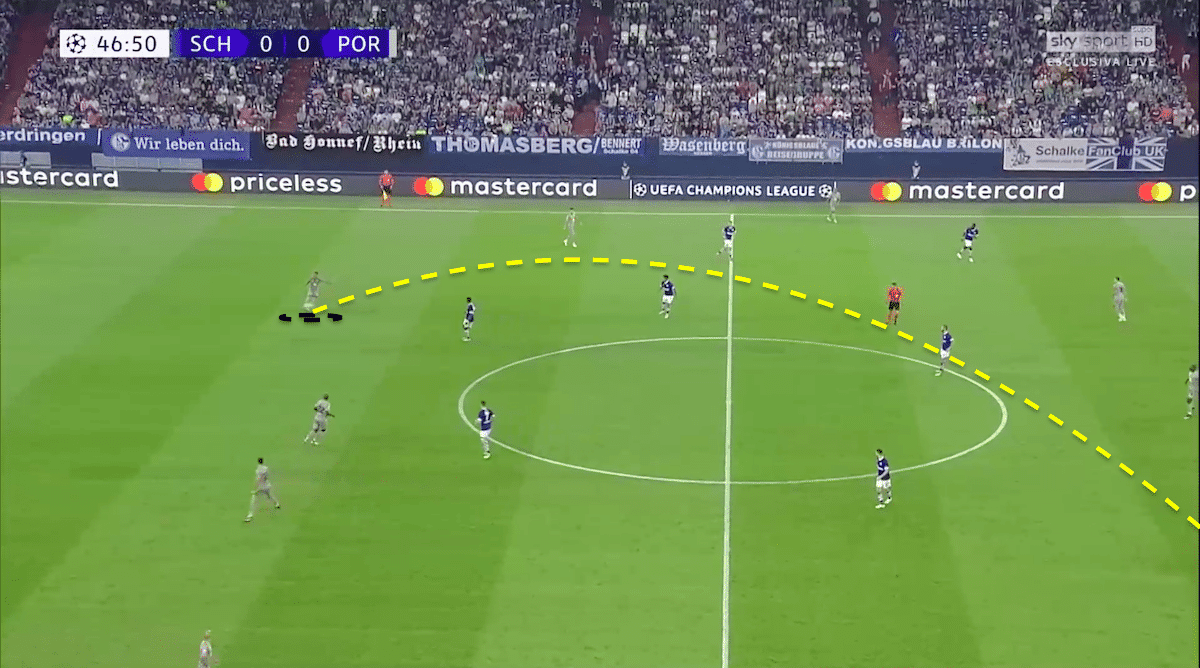 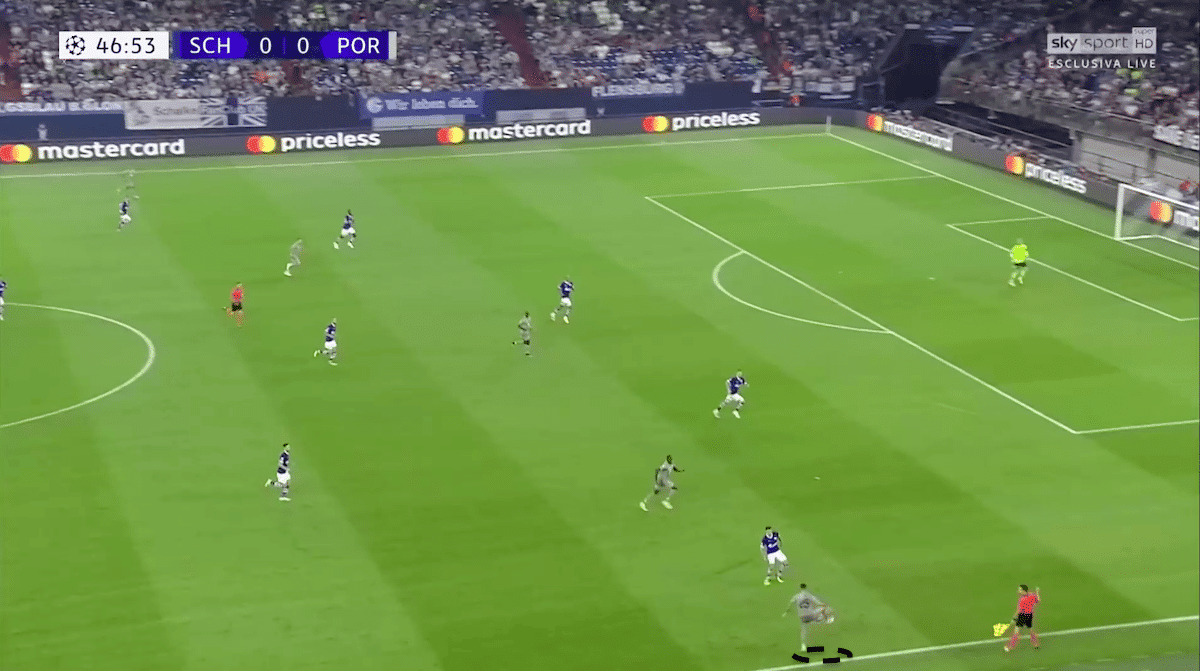 This is not a rare occurrence and in the Champions League this term, Militão has completed an impressive 57.4 per cent of the eight long passes per 90 he has attempted.

However, defenders, no matter how competent they are on the ball, have to be able to defend. And Militão, while sometimes overeager to make a challenge, certainly can.

He isn't the tallest defender but he wins 3.40 aerial duels per 90, the ninth highest total in the Primeira Liga. And while his interceptions per 90 of 2.40 and tackles per 90 of 1.53 are outside the top ten for centre-backs in Portugal, that isn't a surprise given Porto control possession in the majority of their games domestically.

In the Champions League, he has been tested more regularly. However, he hasn't been exposed.

The below stills, taken from the game against Schalke, show the Bundesliga side on the attack. A pass is put behind the Porto defence for the quick Breel Embolo to chase. 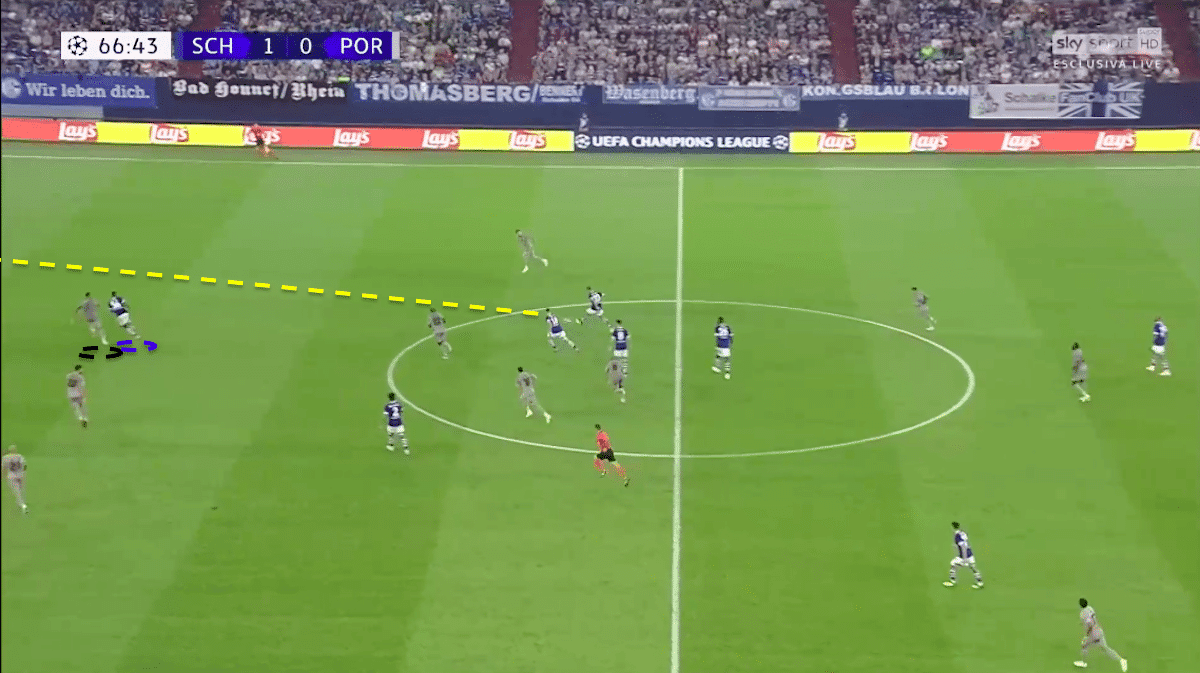 Militão, however, matches him stride for stride. And instead of diving in the 21-year-old forces the Swiss attacker towards the corner flag. 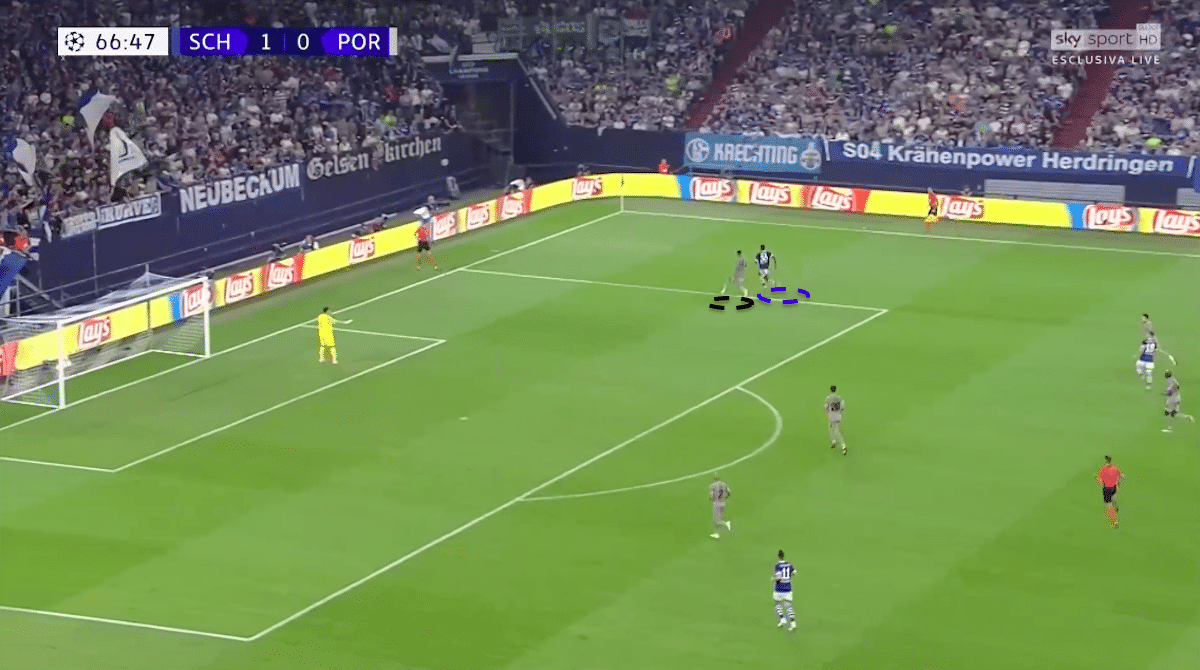 Embolo attempts to hold up the ball, waiting for team-mates to join him in the final third. Yet as he attempts to hold off Militão, the Porto centre-back manoeuvres himself around the ball and reclaims possession. 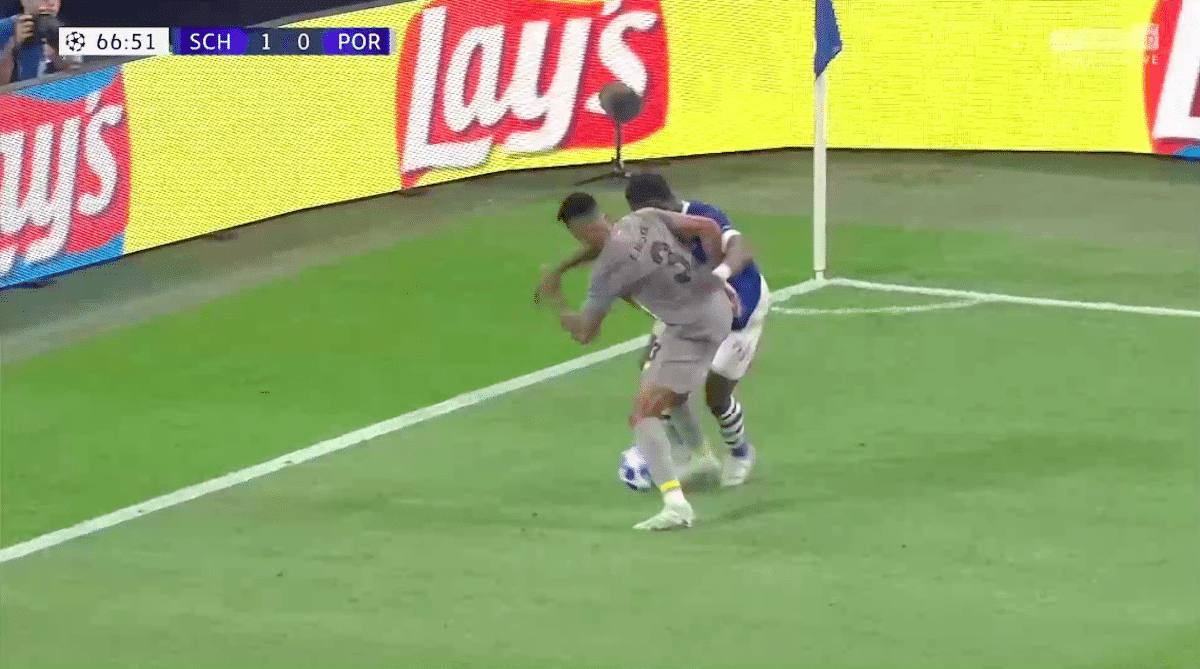 Given the majority of elite coaches employ a high defensive line to stifle opponents, Militão's pace would be a huge asset for any side.

“He has qualities to play in more than one position,” Conceição explained when discussing Militão, who played at right-back during his final six months with São Paulo.

“So his position will always depend on what the team needs. We know that he is a young person, but he has an interesting base, one that is well formed in football terms.”

As mentioned above, Militão's eagerness to win back possession can leave his defence exposed.

In a similar vein to David Luiz, the young defender has a tendency to try to nip in front of an attack to reclaim the ball. While he often judges this correctly, physical strikers have held him off and advanced on goal.

His short game could also be touched up. While Militão is a confident passer, he does, on occasion, attempt difficult passes instead of ensuring his side maintain possession.

Yet these areas of his game will only improve with experience. And he will be given the opportunity to learn and improve at Porto. 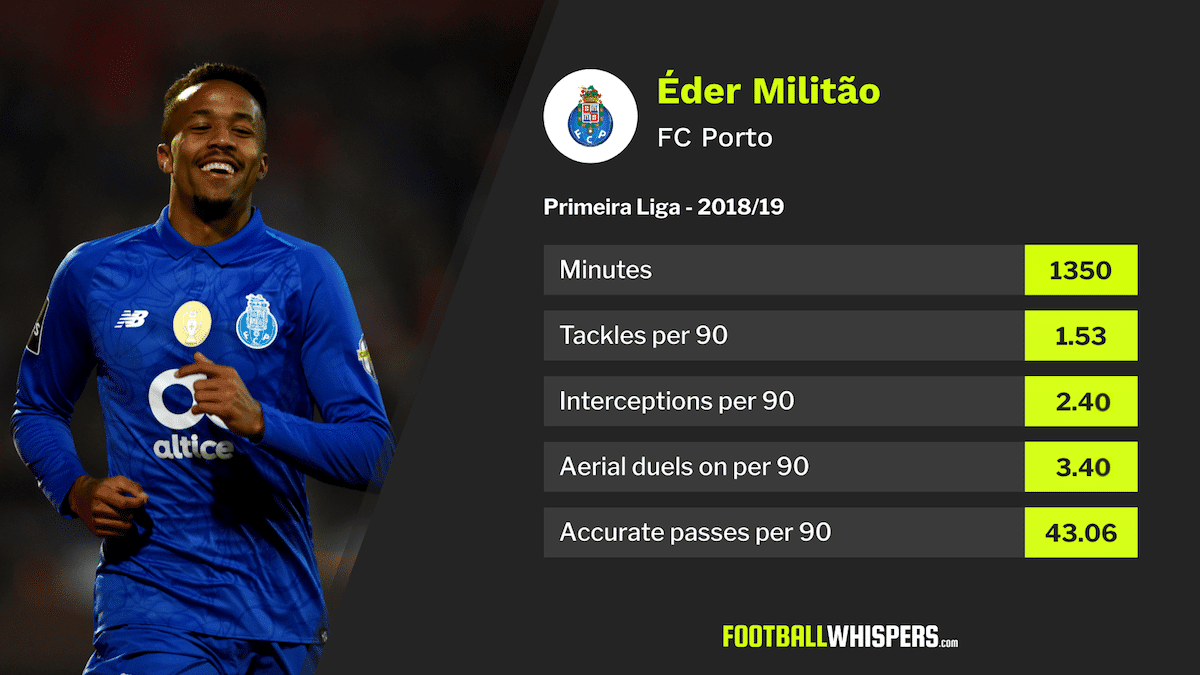 The signs point to Real Madrid and Bertolucci said earlier this month: “We’re not ruling out his signing for Real Madrid in the summer.”

However, Porto are working hard to keep Militão at the club, or at least ensure they receive far more than £45million if he departs.

Costa said earlier this month: “There was talk of one or two clubs and there is a termination clause, but we are trying to negotiate to renew the contract and increase the clause.”

If Porto are able to bump up Militão's buyout clause then it could put other sides back in the race. Real are, according to numerous reports, going to launch a summer move for Chelsea star Eden Hazard and that could put a serious dent their summer budget.

Manchester United and Liverpool both have the financial strength to land the defender, while Juventus are searching for younger players to build their squad around.

No matter where he ends up, though, one thing is certain, Militão will not come cheap. Porto players never do.