When it comes to signing centre-backs, Arsenal don't exactly have a stellar record in recent years.

William Saliba, signed from Saint-Étienne but loaned back to the Ligue 1 side, may buck this trend but he won't arrive at the Emirates until next season. He will also be just 19 years old, it would be unfair to expect him to be a one-man fix for the Gunners faltering backline.

And perhaps that is why Arsenal continue to be linked with central defenders on an almost weekly basis. Dayot Upamecano has often been touted as a potential target, as has his RB Leipzig team-mate Ibrahima Konaté.

Yet neither would come cheap and that may explain why the Gunners have, according to the latest reports, turned their attention to Villarreal's young defender Pau Torres.

The 22-year-old spent last season on loan at Malaga in the Spanish second tier but returned to El Submarino Amarillo in the summer and was ready to nail down a spot in the first team. He's done just that.

Torres has completed 90 minutes in each of Villarreal's 13 LaLiga games this term and his form resulted in a senior international call-up in October and a La Roja debut off the bench in November against Malta, a game in which he scored.

This rapid progress has not gone unnoticed. Manchester City have monitored Torres this season and Real Madrid, Barcelona and Chelsea have all been linked. Yet it's Arsenal whose interest is strongest and the north London club are not put off by the defender's £43m buyout clause.

Such a fee would make Torres Arsenal's third-most expensive signing of all time. And, by some distance, their most costly defender. But the big question is whether a centre-back with fewer than 25 LaLiga appearances to his name is worth such an outlay.

One person who is convinced is Santi Cazorla. The former Gunners maestro is a team-mate of Torres at Villarreal and supposedly called Unai Emery to recommend the defender. That alone carries weight.

So is Torres the real deal? Well, it's never easy to judge central defenders. Their output is arguably more influenced by the demands of a coach and the strength of their side than any other position.

At Villarreal, who are in midtable in LaLiga this term, Torres will inevitably be kept busy. That is a given.

This season he is averaging 4.54 clearances per 90 and is regaining possession in the defensive third on 4.23 occasions per 90. That puts him among the top twenty defenders in the Spanish top flight in those respective fields. 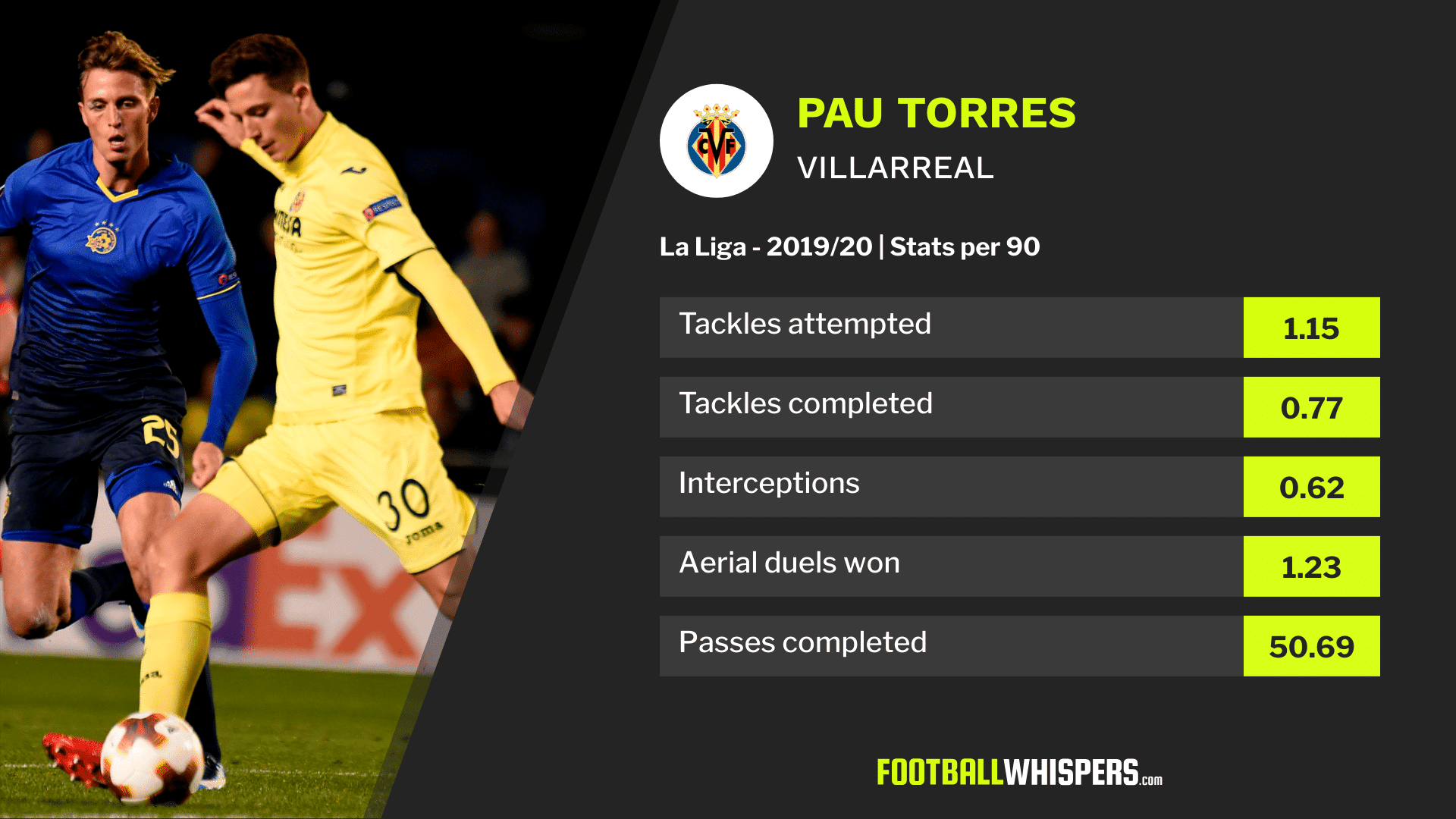 He rarely dives into challenges and instead opts to push forwards away from goal and shutdown attacks through intelligent positioning. When needed, though, he is prepared to use his body and has averaged 0.85 blocked shots per 90, a figure bettered by only 21 LaLiga defenders.

Where Torres' composure shines through is in possession. He is comfortable playing out from the back or bringing the ball forward into midfield to start attacks, something Emery has demanded of his centre-backs.

He is averaging 50.39 completed passes per 90 this term and 21.69 of these go forward. What is more impressive, though, is his range of passing off his left foot. In LaLiga this season Torres is completing 7.62 long passes which end in the final third, the 18th-most among defenders.

This ability can turn defence into attack in an instant. Torres can open up a deep block with crossfield balls or start a quick counter from deeper areas with a raking pass. Nicolas Pépé and Pierre-Emerick Aubameyang could certainly benefit in the latter scenario.

It's clear the Villarreal No.4 has an abundance of potential, and he should only get better with more experience. He is also good enough to slot into the Gunners' back four as soon as January.

Yet that doesn't mean the Premier League giants should bring him to the Emirates when the transfer window reopens. Arsenal's defence this season is an unforgiving environment. If Emery was to sign Torres, put him straight into the team, and then watch him struggle, it could harm his development and damage his confidence.

The smart move – although Arsenal fans may disagree – would be to mirror the deal done with Saint-Étienne for Saliba. Sign the defender in January but let him stay in Spain until the summer.

He would then get a full season of first-team football under his belt and also have time to prepare for a move abroad, a life-changing process that is often overlooked.

Torres is from Villarreal. He is a hometown boy. “I wish I could play here all my career. It is the club of my life,” he told Super Deporte in the summer. It will not be easy for him to move away but he is too talented for Villarreal to keep for the foreseeable future.

Arsenal can take advantage. And if the club were to start next season with Saliba and Torres in their side, a position of weakness will have become one of great strength.