The Canaries are flying. Unbeaten in the Championship in 2019, Norwich City have hit the front, two points clear of Leeds United and five ahead of third-placed Sheffield United.

They're looking a pretty safe bet for promotion back to the Premier League. Beyond winning games and top-flight ambitions, Norwich fans have a lot to be excited about.

First and foremost, Daniel Farke, their German head coach, has established himself as one of the brightest managerial prospects in the country.

Linked with @SpursOfficial, @Arsenal and @ChelseaFC

Who is Max Aarons? #NCFC pic.twitter.com/gtDLROqUmV

The 42-year-old's path bears striking similarities to former Huddersfield boss David Wagner. Like him, Farke was plucked from Borussia Dortmund II and charged with overseeing an English second-tier side's transformation.

Considering Farke took his beloved SV Lippstadt from the fifth level of the German football ladder up to the third tier while combining duties as head coach and sporting director, his credentials were impressive.

Appointed ahead of the 2017/18 campaign, it started slow, with Norwich managing only a 14th-placed finish. Then they lost top scorer and star man, James Maddison, to Leicester City.

The powers-that-be at Carrow Road didn't panic, though. A busy summer of recruitment saw no fewer than 16 players signed, with the same number heading for the exit door.

Farke was influential but the main driving force behind the infrastructural revamp was rising star technical director Stuart Webber who, incidentally, was appointed at Norwich after his sterling work at Huddersfield.

Now, having lost just once in their last 19 league games, Norwich are dreaming of the big time once again. And Farke, whose attacking philosophy has won him many admirers in Norfolk, has built a team worth looking purring over.

The brilliantly named Teemu Pukki, one of the club's many shrewd acquisitions under Farke, has been a huge hit, his 20 goals fuelling their promotion bid. Emiliano ‘Emi' Buendía, the young Argentine signed from Getafe last summer, has been a revelation on the right flank.

Then there are the young Englishmen. Centre-back Ben Godfrey has belied his 21 years since cementing his place in the side in December, but there is even more buzz surrounding Max Aarons, the electrifying right-back who has been a mainstay in Farke's back four.

With the equally exciting Jamal Lewis on the opposite side of the defence, Norwich's flying full-backs – both products of the club's esteemed youth academy – have been one of the key tenets of Farke's side.

And Aarons' stock is clearly rising at a rapid pace, having emerged as a transfer target for Arsenal, Tottenham Hotspur and Chelsea. On the off-chance Norwich don't clinch promotion, it seems their right-sided dynamo is destined for the Premier League one way or another.

London-born Aarons started his career at Luton Town before joining the Canaries in 2016. After two years in the academy, he was handed a professional contract last summer.

Since then, his progression has been swift. Having debuted in August's Carabao Cup win over Stevenage, he didn't have to wait long for his first senior goal, scoring the third in the 3-1 win at Cardiff City in the next round.

Deployed at left-back that night, Aarons capped the win with a fine strike; making a darting diagonal run before holding off his man, spinning and finding the far corner.

His reward was being handed a league debut in the East Anglian Derby as Norwich drew 1-1 with Ipswich Town.

And, in a way, Aarons has come full circle. At the time of writing, his most recent appearance also came against the Tractor Boys, he starred in his side's 3-0 win. He was right in the thick of a tempestuous local derby, too, with Jon Nolan's foul on the 19-year-old triggering a fracas between the two benches which led to Ipswich boss Paul Lambert's dismissal.

But Aarons' skills extend far beyond being Ipswich's tormentor. With 26 starts this season he has ample opportunity to adapt to Farke's system. One of the most pleasing aspects of his game, from a Norwich perspective, is the ease with which he has forged a productive understanding with Buendía down the right.

One of Aarons' most noticeable assets is his ability to stretch the play. Indeed, his speed and balance regularly see him breezing past opponents and get to the by-line. His 1.43 successful take-ons per 90 minutes is second-highest among defenders, bettered only by Bristol City's Jay Dasilva, who is on loan from Chelsea.

Crucially, he gets his head up and assesses the options in the box and, more often than not, delivers – two goals and four assists is an impressive return for a teenage full-back. 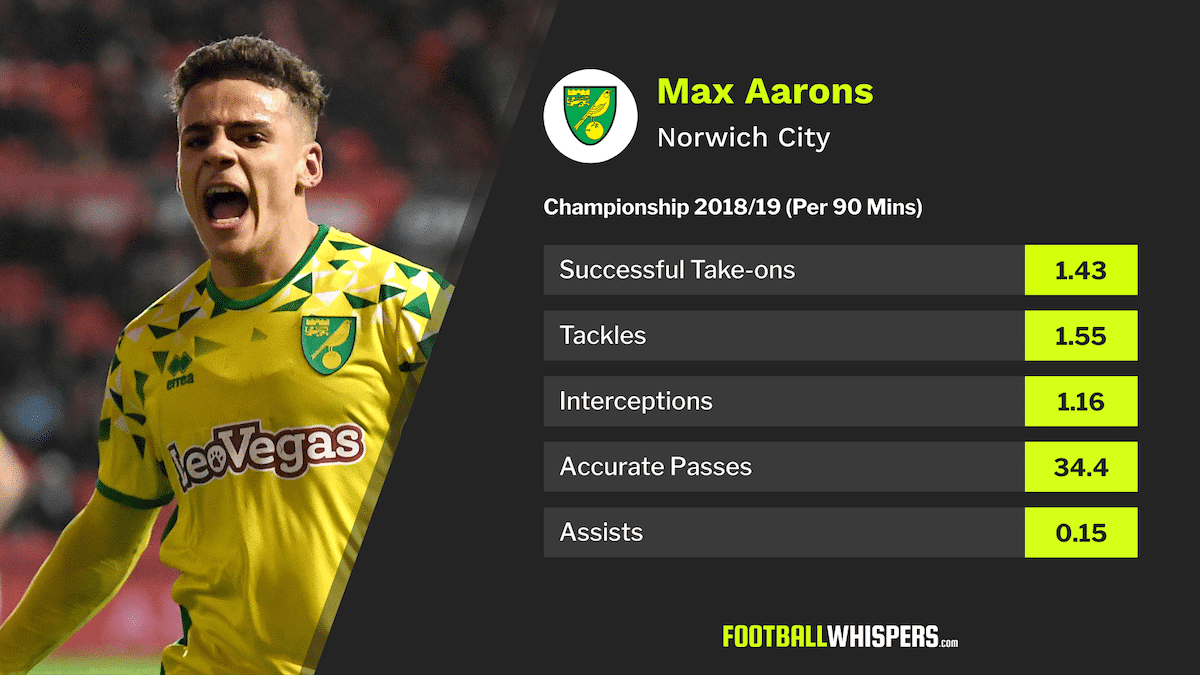 His big-game mentality has shone through in recent weeks, too. Outstanding in the momentum-shifting 3-1 win at Leeds, Aarons also notched an assist in the draw with Sheffield United the week prior, and scored a late equaliser against fellow promotion hopefuls Bristol City – currently the hottest team in the division – in December.

Aarons has swooped in and captured the imagination at Carrow Road. But, while he is a hugely promising player, Ryan Sessegnon's fortunes in the Premier League having been a Championship superstar for Fulham last season should act as a cautionary tale.

Sessegnon, who mercilessly tore defences apart last term, has lost his place under Claudio Ranieri after finding the going tough in the top tier. Aarons' potential is extraordinary – along with Trent Alexander-Arnold and Aaron Wan-Bissaka, England's right-back slot is in good hands – but he has lost just twice in his professional career. The excitement around him must be tempered, especially the vastly superior opposition he may be facing next season.

And it seems as though staying at Norwich, at least into next season, is the wiser move. Well adjusted to Farke's system and aware of his demands, making the leap to a top-six Premier League side like Spurs or Arsenal this summer may be a step too soon.

But make no mistake. Aarons is here to stay. One of the latest out of Norwich's talent factory, he is one to keep an eye out for in next year's Premier League (yes, I'm backing the Canaries to go up).