José Mourinho is not a man who is easily impressed. So it is telling that less than 48 hours after watching Nikola Milenković in action for Serbia, Manchester United lodged a bid for the defender.

The £52.8million offer was, according to the Italian media, flatly rejected by Fiorentina. The Serie A club know full well the talent the 21-year-old possesses and will be aware of the growing interest in him. So accepting the first bid made would never have been an option

But given Milenković's rapid development it won't be long until the Viola are made an offer which they can't refuse. European football's powerhouses are circling and when that happens the outcome is inevitable.

United may lead the race but their noisy neighbours, Manchester City, have too been linked been linked with the centre-back. Juventus and Bayern Munich are also supposedly interested.

That queue of clubs is only likely to get longer in the months ahead. Milenković has started the season strongly for Fiorentina, despite playing out of position at right-back, while he impressed for Serbia at the World Cup.

Such have been his performances for the Italian side since he joined the club in the summer of 2017, he has been compared to a Manchester United great by his national team coach.

“Nikola takes every training session seriously and is very stable. I do not see myself in him, but rather [Nemanja] Vidić,” Mladen Krstajić said prior to the World Cup.

Many a young player would understandably not welcome such a comparison as it only puts further pressure on them to succeed. But it's a mark of Milenković's confidence and maturity that he accepted the burden of being dubbed ‘the new Vidić'.

“It is magnificent to be compared to the likes of Vidić and I have to stay humble with both feet firmly on the ground ,” he told reporters before the summer tournament in Russia.

“Vidic was one hell of a player while I am in the fledgling stage of my career and hence I have to keep working hard in order to climb that mountain. Krstajic’s praise means so much because it’s an impetus to keep improving.”

Rewind three years and the young defender didn't even have a professional contract. He was part of FK Partizan's youth system and played regularly for the club's reserves but wasn't considered a top prospect.

However, when Ivan Tomic took over the first-team in December 2015 he immediately told the club to hand the youngster a pro deal. Milenković was then integrated into the first-team squad and made his debut in April 2016.

He would make four appearances in total under Tomic – who resigned seven months after taking charge – and impressed sufficiently to be given a starting role during the 2016/17 campaign.

From there his career snowballed. He played 40 games across all competitions and his performances were of such a high level that interest from several clubs quickly materialised.

Anderlecht, Hamburg and Juventus were interested but Fiorentina moved quickly and agreed a €5.1million deal before the campaign had ended.

It was a big move for a player with less than a year's experience under his belt and the club's fans were disappointed to see Milenković depart. But he left with a parting gift, the winning goal in the Serbian Cup final against Red Star which secured the double.

The defender's first season in Italy was a slow burn. He spent the majority of the first half of the campaign on the substitutes' bench, being given time to adapt to a new country and a new style of football.

But by the end of the campaign he had established himself as a regular, playing either right-back or centre-back with aplomb. His performances, and an injury to Matija Nastasić, saw Milenković called up to the Serbia squad for the World Cup.

He featured in each of his country's three games at centre-back and looked comfortable on the biggest stage in football.

“He was our best outfield performer by a distance alongside Aleksandar Kolarov and, he earned a lot of credit,” Joksic said. “Nikola is a very level-headed guy who grew up in a good family. He always keeps his feet on the ground, and tries to go forward step by step.”

There were reports of a move away once more in the summer but Milenković admitted he wasn't interested in a switch. “Serie A is ideal for studying and I can make progress at Fiorentina. There is no better environment for a young player,” he explained.

This term he has been played exclusively as a right-back by his club. And it is his performances in the unfamiliar role which have piqued the interest of Europe's elite.

The immediate thing that stands out when watching Milenković in action is his height. Standing 6ft 5ins he isn't your typical right-back and, in time, he will move into the centre permanently.

Yet his imposing frame doesn't restrict his movement or his ability on the ball. He is surprisingly quick across the ground for someone so tall and is as technically adapt as any ball-playing centre-back, not a surprise given he has modelled his game on Barcelona's Gerard Pique.

Milenković also reads the game far better than many at his age. He appreciates when to move in to try to win the ball and when to stand his ground.

The still below is taken from the World Cup game between Serbia and Switzerland, who are countering through Xherdan Shaqiri. The now Liverpool winger is quick and skilful and can take defenders out of the game in an instant. 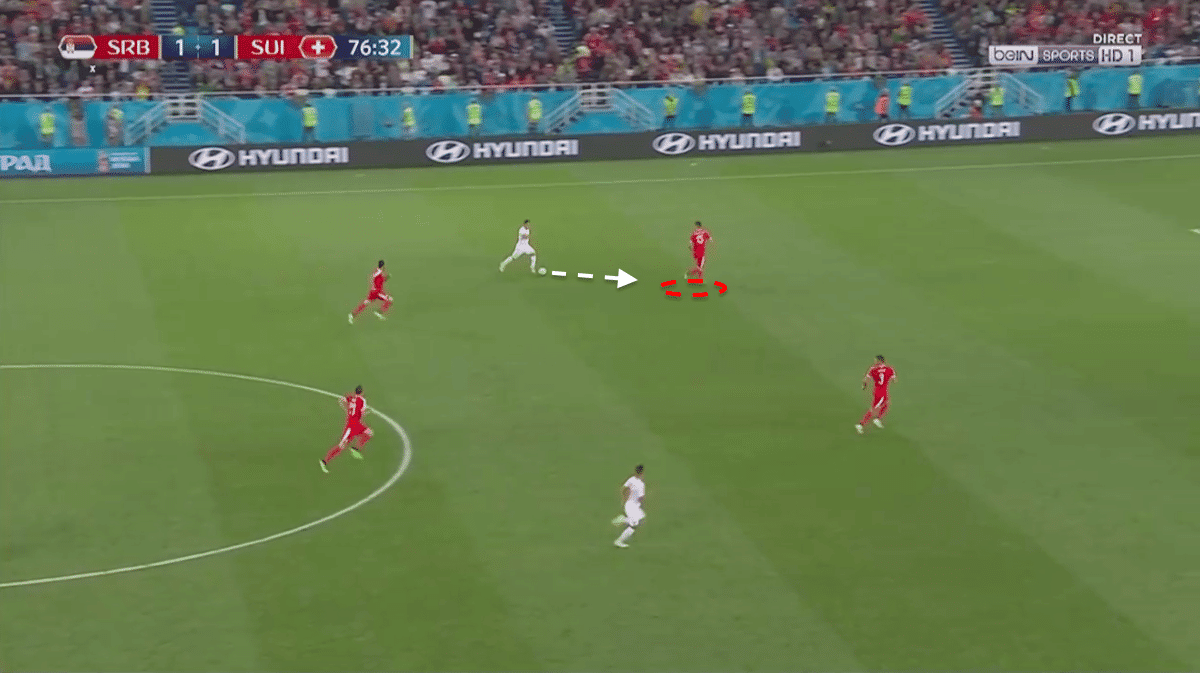 Milenković is isolated one-on-one. For any centre-back, yet alone one who is 6ft 5ins, it's an uncomfortable position to be in. But the Fiorentina star makes the right decision at every moment of the move.

With the ball under Shaqiri's control, he drops back towards his goal. However, Milenković doesn't give the winger the space needed to burst past him. 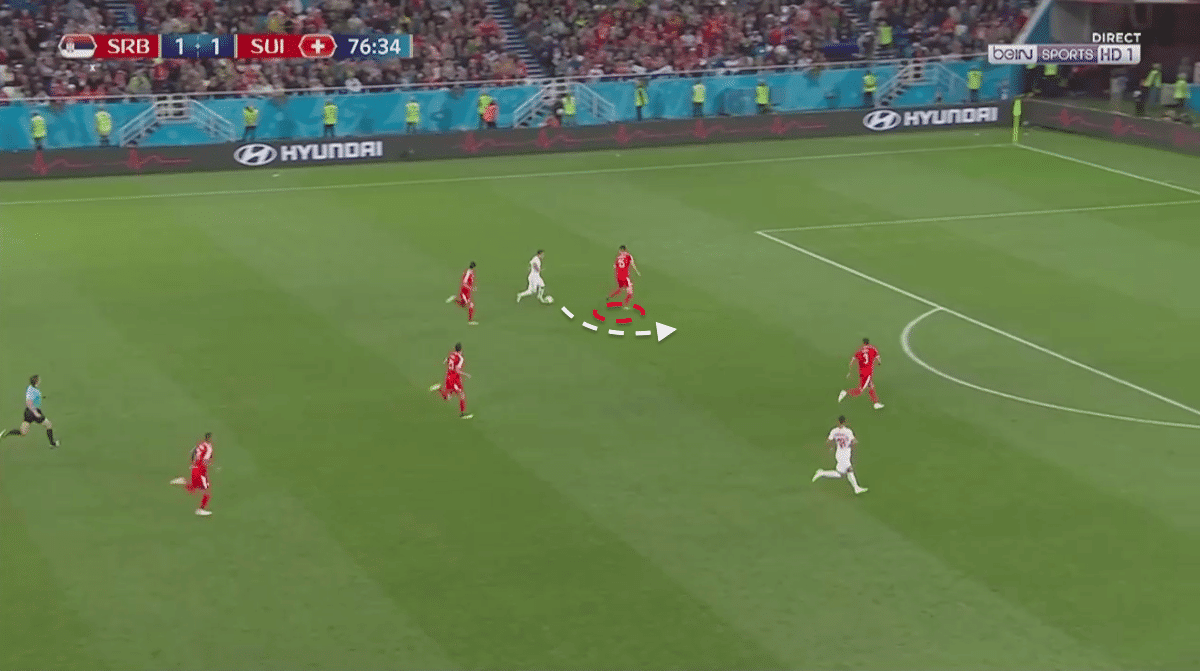 He waits for the Swiss star to make his move and Shaqiri attempts to trick his way inside and onto his right football.

But Milenković reads the situation. He quickly spins and is able to win the ball with a perfectly timed tackle. Serbia take back possession and are able to launch an attack of their own. 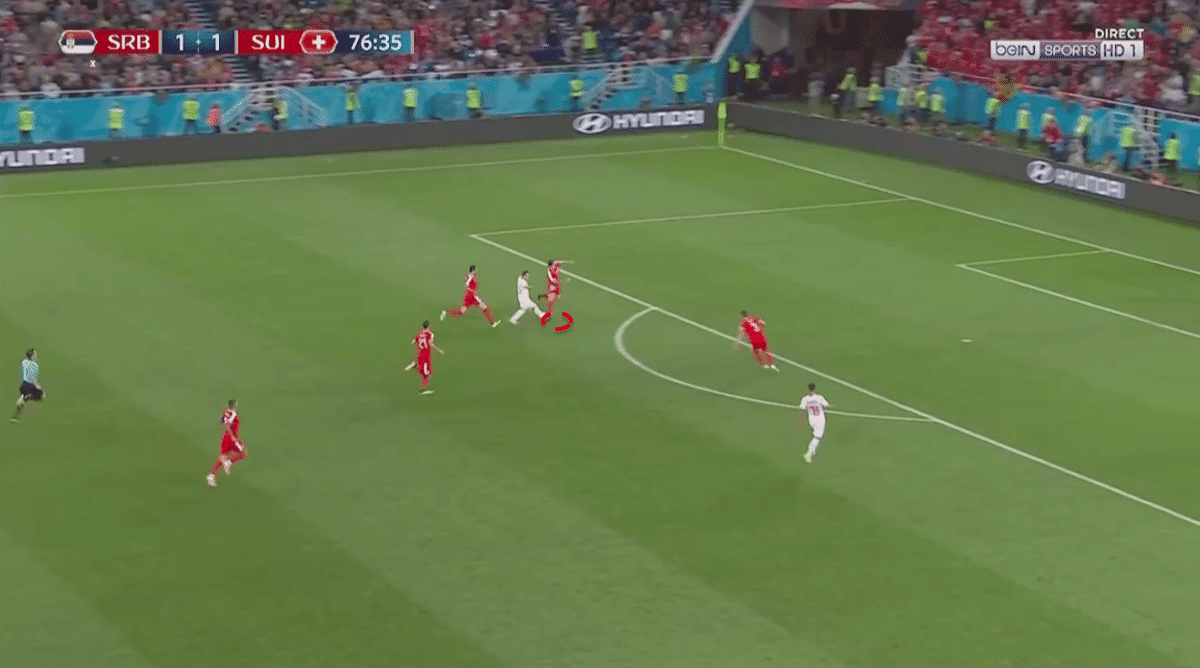 Many elite centre-backs must now press opposing attackers quickly, not giving them time to turn and threaten goal or continue attacks.

The below is taken from Fiorentina's Serie A clash with Atalanta at the end of September. 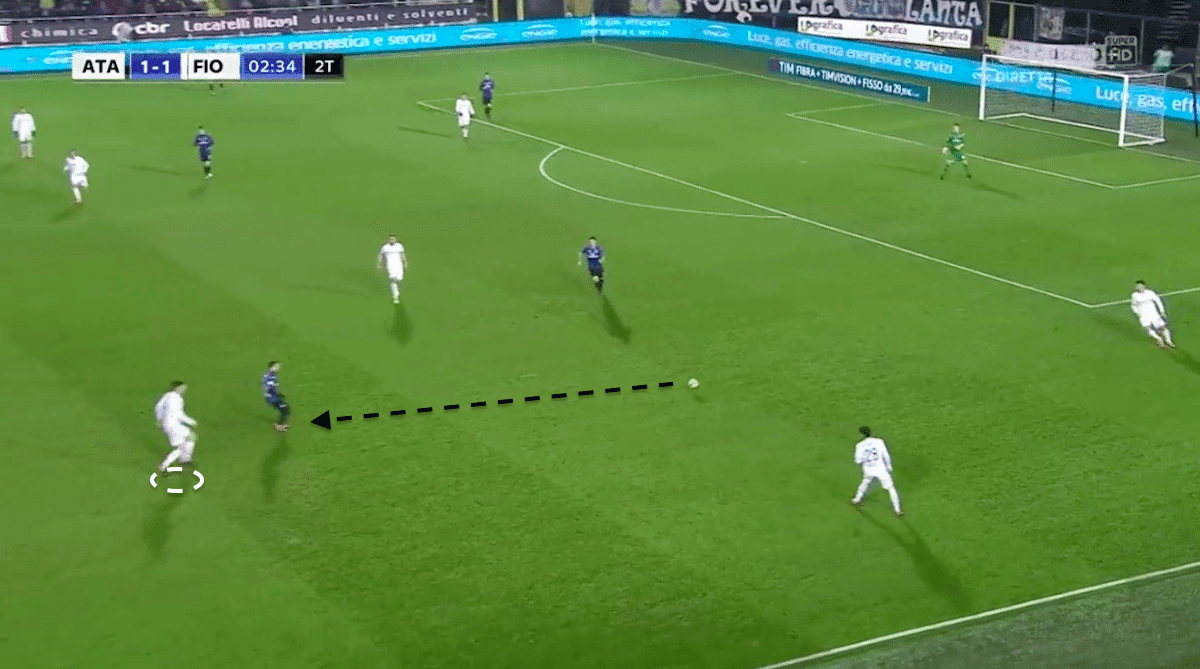 Alejandro ‘Papu' Gómez has dropped deep to collect possession but Milenković has followed him into Atalanta's defensive third.

He forces the Argentine back towards his own goal and, when Gómez attempts to turn him, Milenković sticks out one of his long legs to intercept. 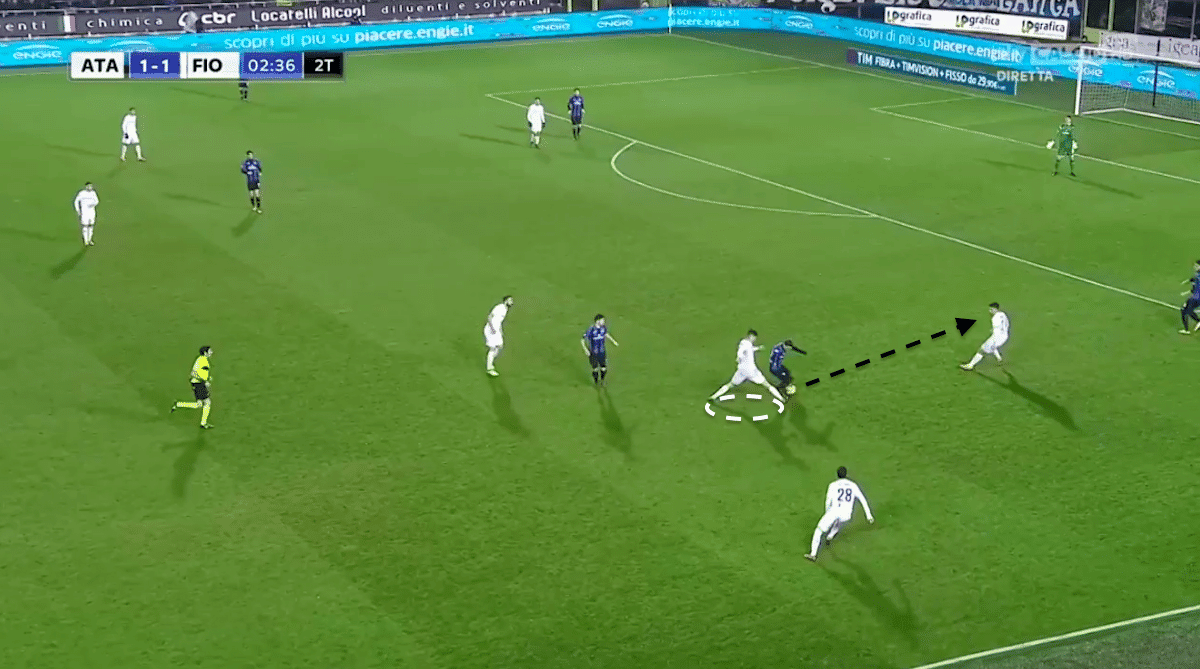 The ball falls to Enrico Chiesa who drives into the penalty area and is brought down. The penalty is dispatched by Jordan Veretout and Fiorentina go on to win the game 2-0. 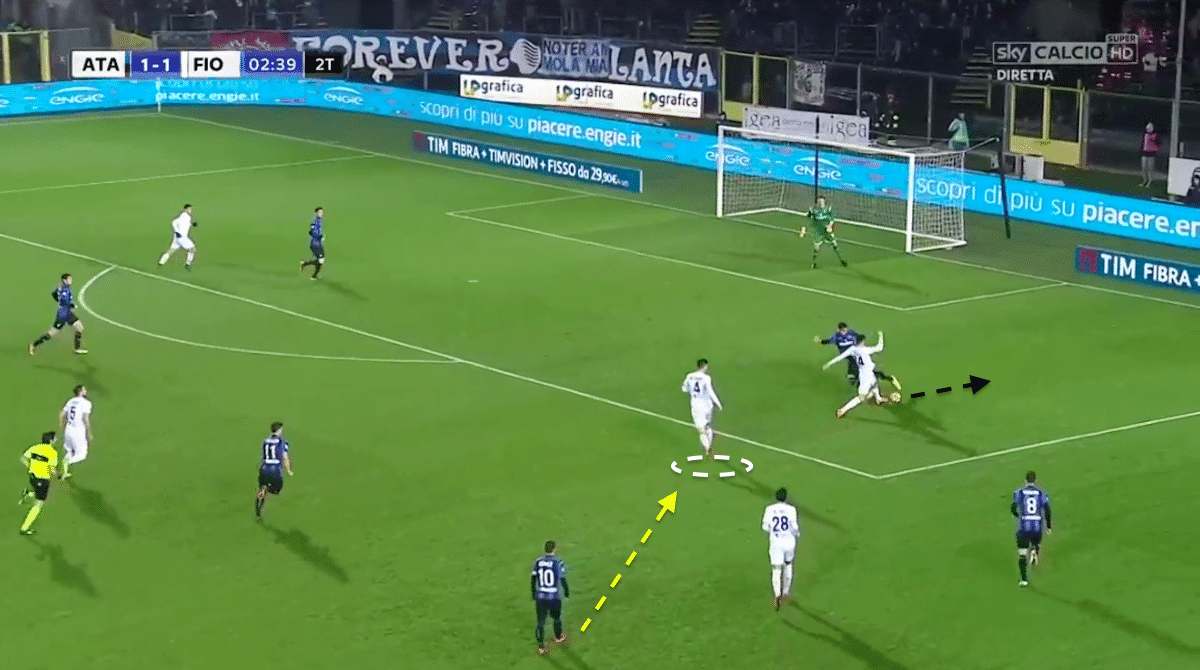 The above are examples of his defensive work but his ability to threaten the opposition goal shouldn't be forgotten.

His size means he is a menace from set-pieces and he already has two goals to his name this term, one of which was a thunderous half volley from 20 yards against Chievo.

Given he is only 21 years old, and has just the two-and-a-half seasons of regular first-team football under his belt, it's understandable that Milenković is not the finished article.

His distribution needs improvement, especially when attempting to progress possession. This term he has attempted 34.87 passes per 90 minutes for Fiorentina but only 42.4 per cent are forward.

His 6.25 backwards passes per 90 minutes is also fourth highest amount of any defender in Serie A, while his percentage of completed passes (76.8) also needs to rise.

But it's important to remember Milenković is being played out of position and the passing lanes for a full-back are not as easy to navigate as those available when deployed in the centre.

And ultimately the only other aspects of his game that need honing will come with experience. Consistency, concentration, composure all improve with age and the youngster has plenty of time on his side. 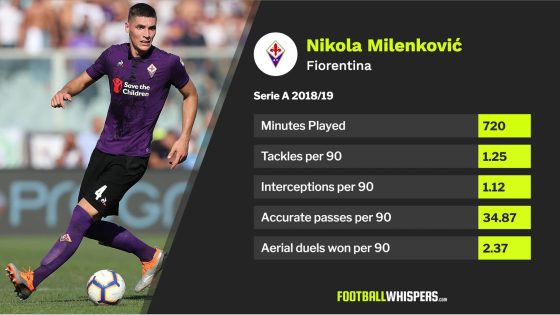 Clearly Mourinho is keen. The Portuguese was desperate to land a central defender in the summer only for the club's higher-ups to decide otherwise.

With the reports of a bid being lodged for Milenković clearly that belief has changed. But the obvious point is that if Mourinho doesn't make it to the January transfer window, and that is by no means a certainty, then United's interest may quickly dissipate.

City have the financial clout to go after Milenković and are likely to be searching for a long-term successor to Vincent Kompany given Pep Guardiola still doesn't appear to have complete confidence in John Stones. But the club may decide to turn their attention elsewhere if the price-tag spirals.

And that may happen if Juventus and Bayern firm up with interest. Both have plans to lower the average age of their squads and Milenković would be an excellent addition for either.

But ultimately it comes down to who makes Fiorentina the highest offer and who presents Milenković with the most attractive opportunity. He proved this summer he would rather stick than twist, so it's down to the buying club to show him their hand.