You can tell the transfer window is shut when a youth signing hits all the papers.

But Manchester United fans may have good reason to be excited about the latest arrival Arnau Puigmal.

The announcement of his signing for the Red Devils happened in a thoroughly modern way, with the 16-year-old revealing he’d made the switch on Instagram.

He posted a picture of him signing the contact alongside under-18s coach Kieran McKenna and former United striker Andy Cole.

The Spaniard wrote: “Very happy and proud to announce that I am a Manchester United player, a dream come true. It’s time to work, come on Red Devils!”

Born in 2001, Puigmal became part of the Espanyol academy in 2010, when he joined from local side Sant Cugat.

The deal to take him to United was agreed back in July, with international clearance only being granted recently.

Puigmal wrote an emotional goodbye message to Espanyol then, saying: “It isn’t easy to say goodbye to somewhere that’s been your home for so many years, and it’s just as hard saying goodbye to the people who’ve been by your side on this great journey.

“First of all, I want to thank Espanyol for believing in me at all times and for putting their trust entirely in me.

“I also want to thank all the members who form this club, without them it would be difficult to be the where I am in life at the moment or the player I am today.

“I also can’t forget my teammates, who’ve trusted in me in every moment and who have helped me to grow both as a footballer and as a person. I will always be grateful.”

He was one of the stars at his cadete age level in Spain, which is the equivalent of under-16 level in English football.

That was merely underlined at the 2017 Mediterranean International Cup this April – a tournament which featured a number of youth teams, including United, Real Madrid, Arsenal, Bayern Munich and Liverpool.

He featured in that tournament against Manchester United, and that may be where he caught the eye.

Puigmal was named best player at his age level in the cup, and also scored against Barcelona in the final as Espanyol went on to lift the trophy.

He’s not only impressed for Espanyol, also featuring for the Spanish and Catalan national teams.

Puigmal is clearly not shy in confidence either – he scored a panenka penalty in a shootout against England under-16s in a match held at Leek Town in February.

What sort of a player is Puigmal?

The 16-year-old is a box-to-box midfielder, who is right-footed but comfortable using both feet.

He’s got great technical ability and is a workhorse, in a good way. He runs up and down the pitch all game.

Once he gets going, he’s hard to stop, and he also has the ability to make the right decision when he needs to. He is spoken about as a player who plays with his head up, and this means he has an eye for a pass – even after a long run – and isn’t averse to scoring either.

There isn’t too much footage of him around, but we’ve had a look at his performance in the 3-0 quarter-final win in the Mediterranean International Cup over Manchester United, where he played on the left-hand side of central midfield.

Watching him was reminiscent of Frank Lampard, as you can see in the stills below. 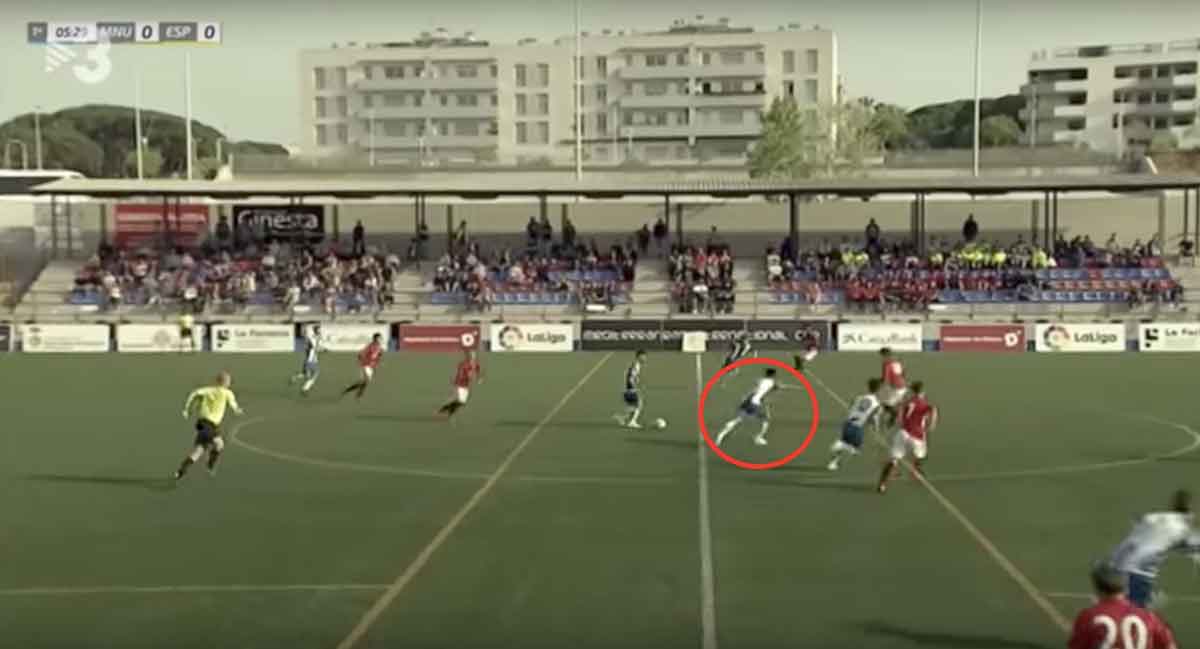 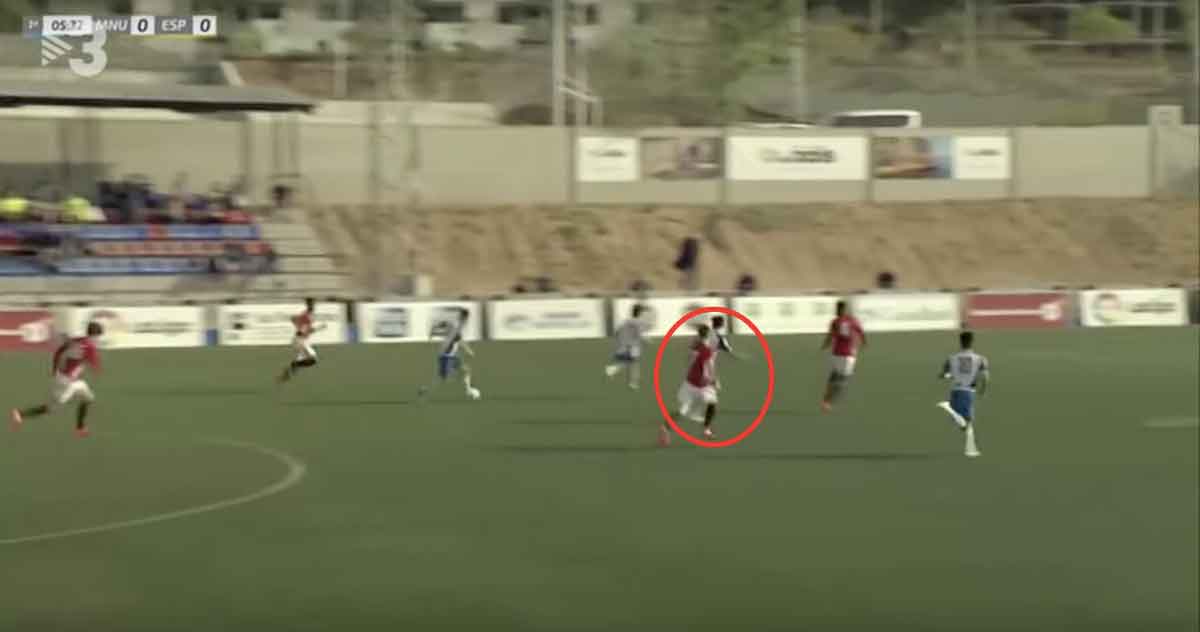 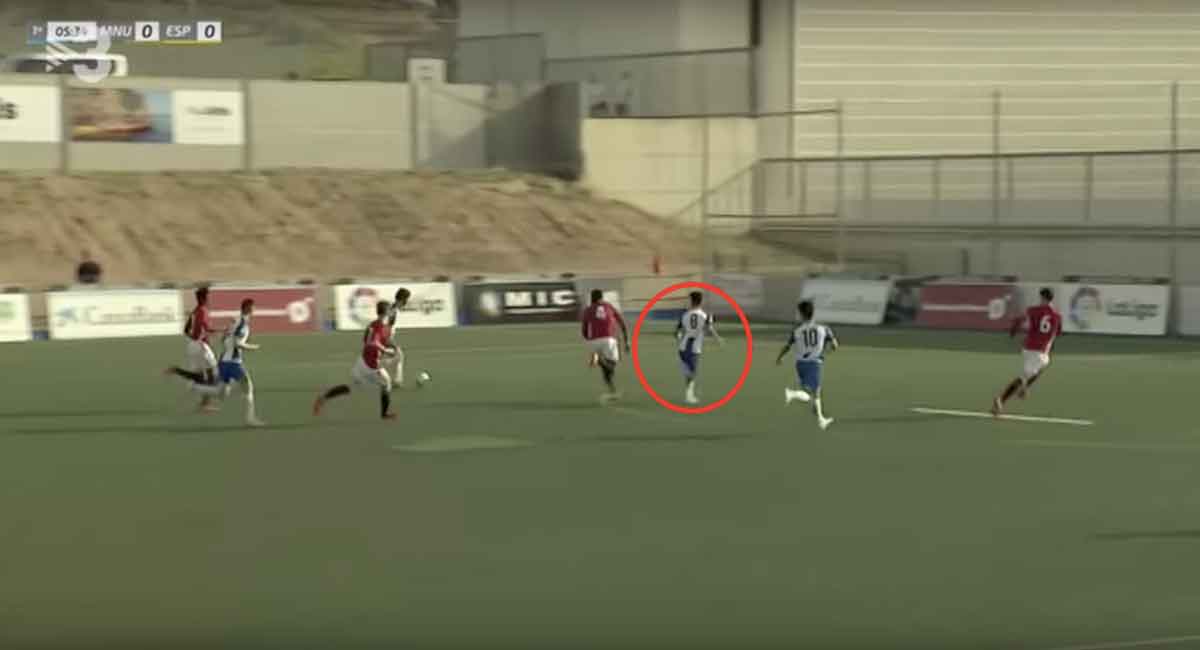 When the ball is picked up in Espanyol’s half, Puigmal (circle) wants it immediately.

He doesn’t get it straight away, but carries on his run forward, staying away from any potential markers, and keeping himself in a position where he can cause damage with the ball.

His team-mate doesn’t find him, but if he did, he was in the perfect place to get a shot away by the third image. 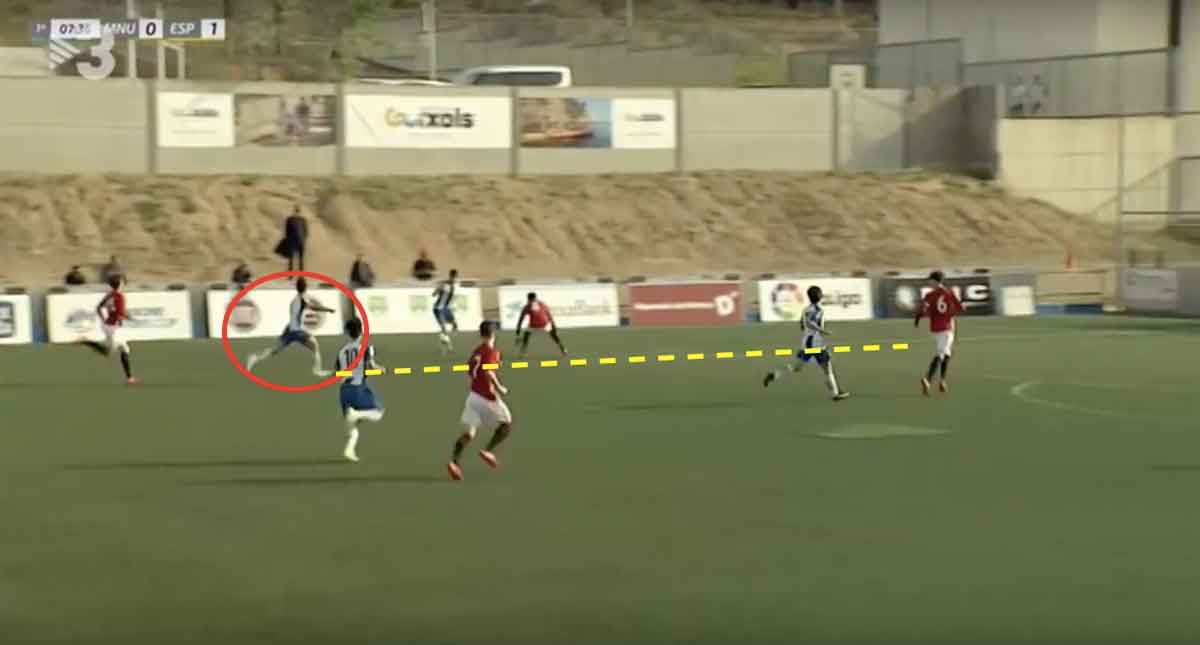 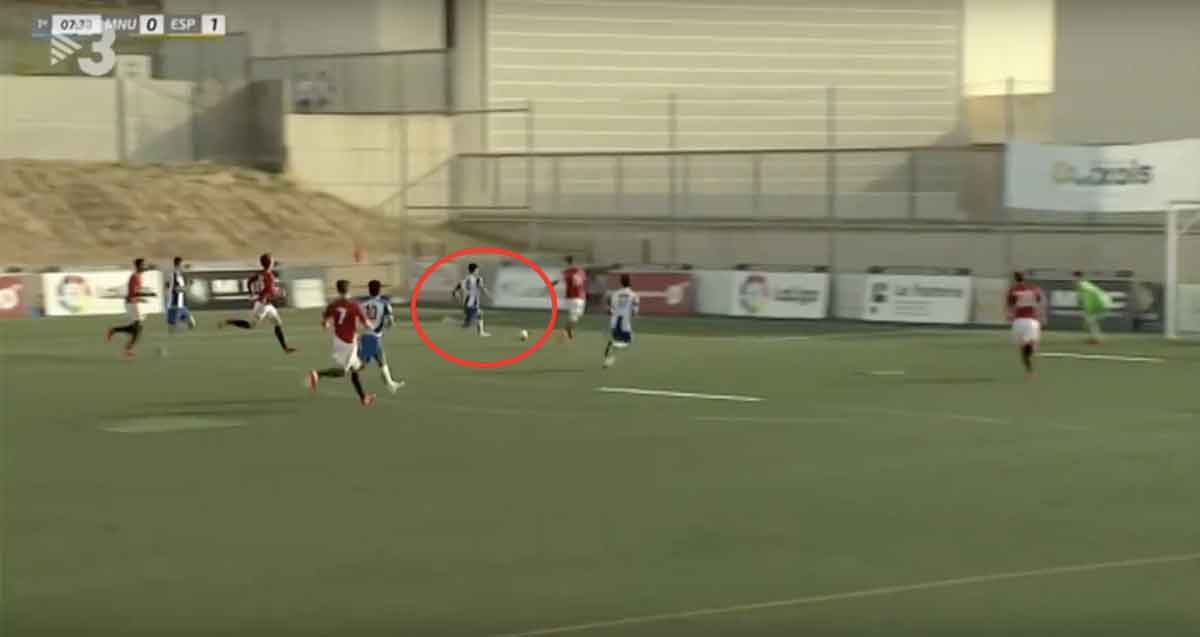 You can also see how he loves bombing forward from deeper positions here too.

He sees his team-mate with the ball and makes the perfect run to get in behind the defence and put a dangerous ball across the box. 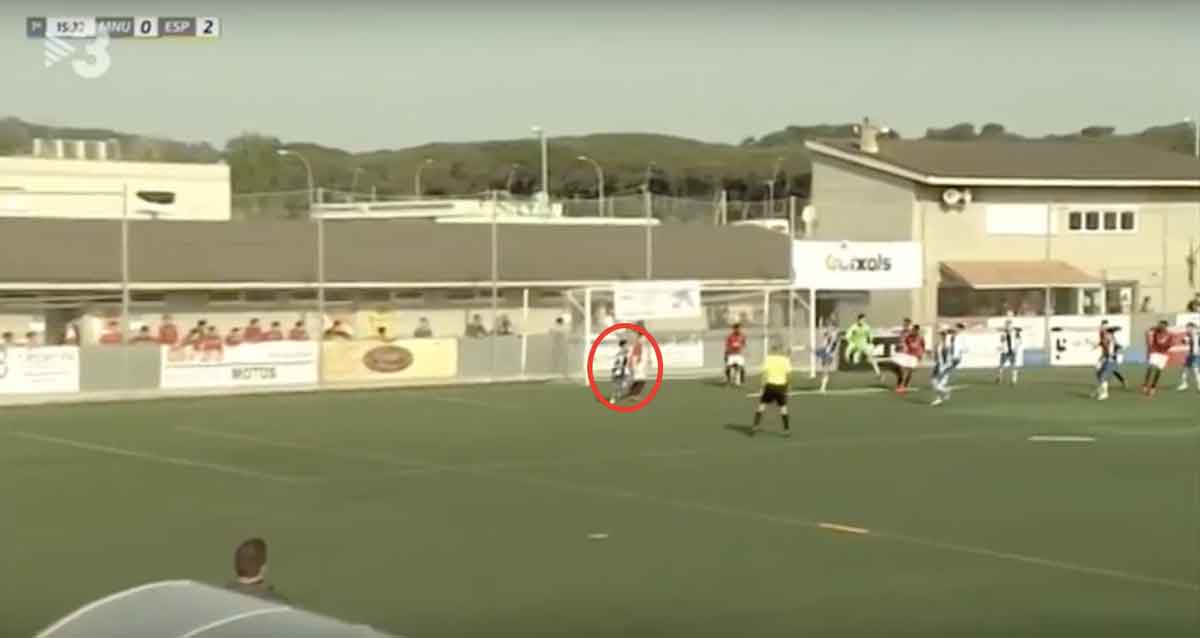 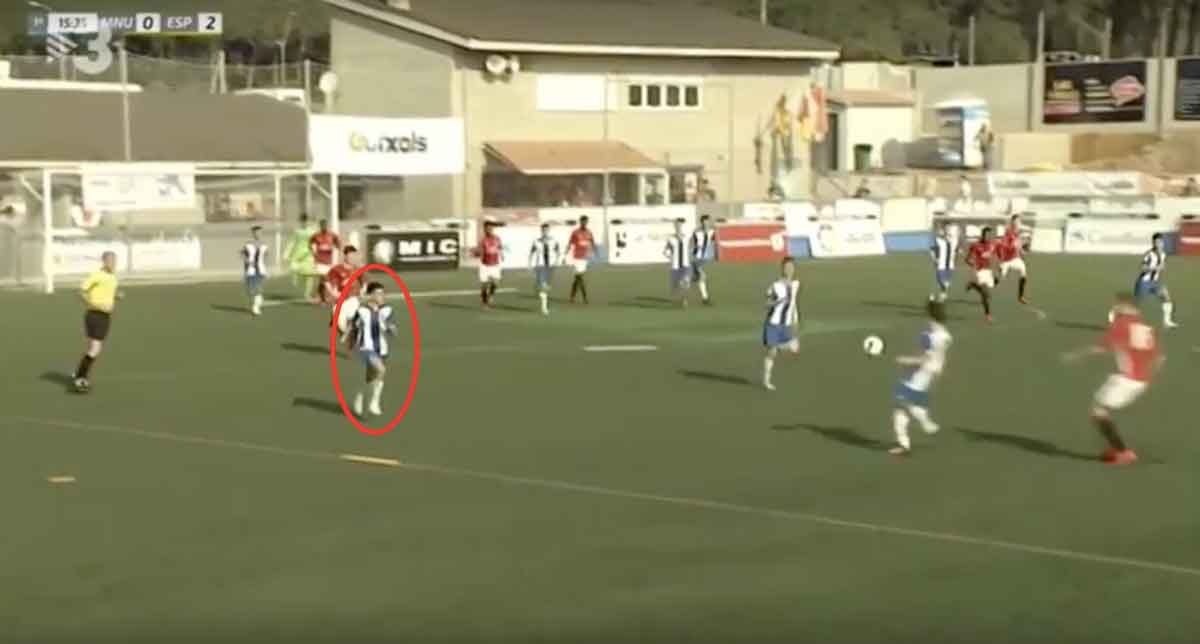 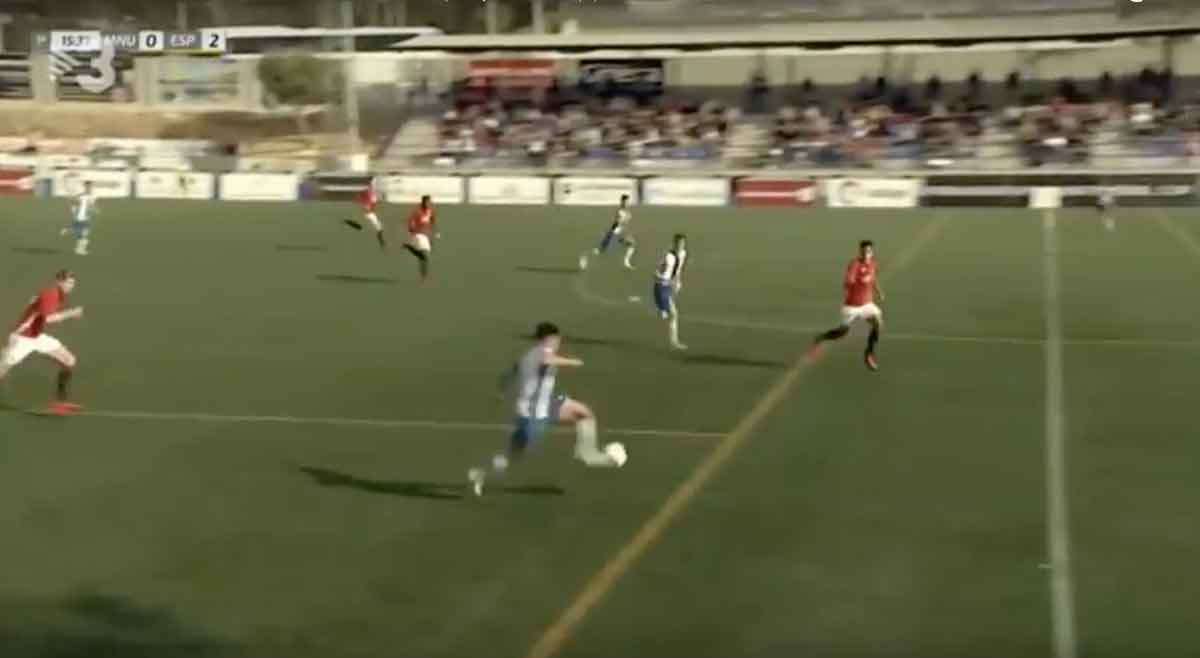 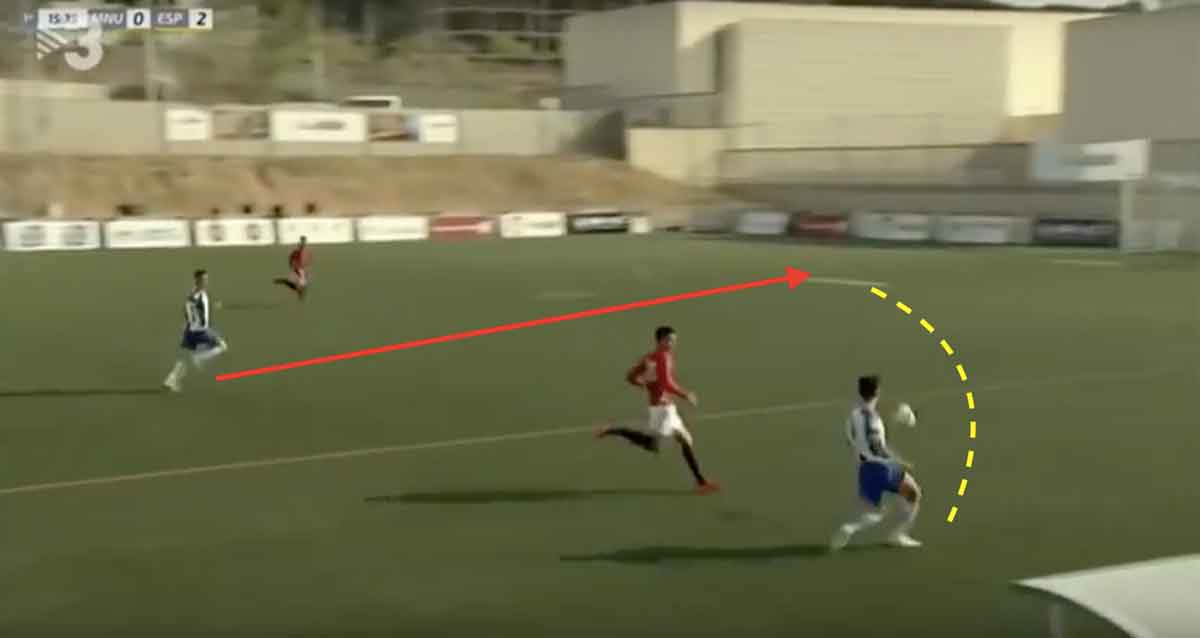 He was demonstrating this throughout the game, and the best demonstration of that may have been in the stills above, where he runs from his own penalty box to help kickstart a counter attack, before playing a pass for his team-mate to get a shot away. 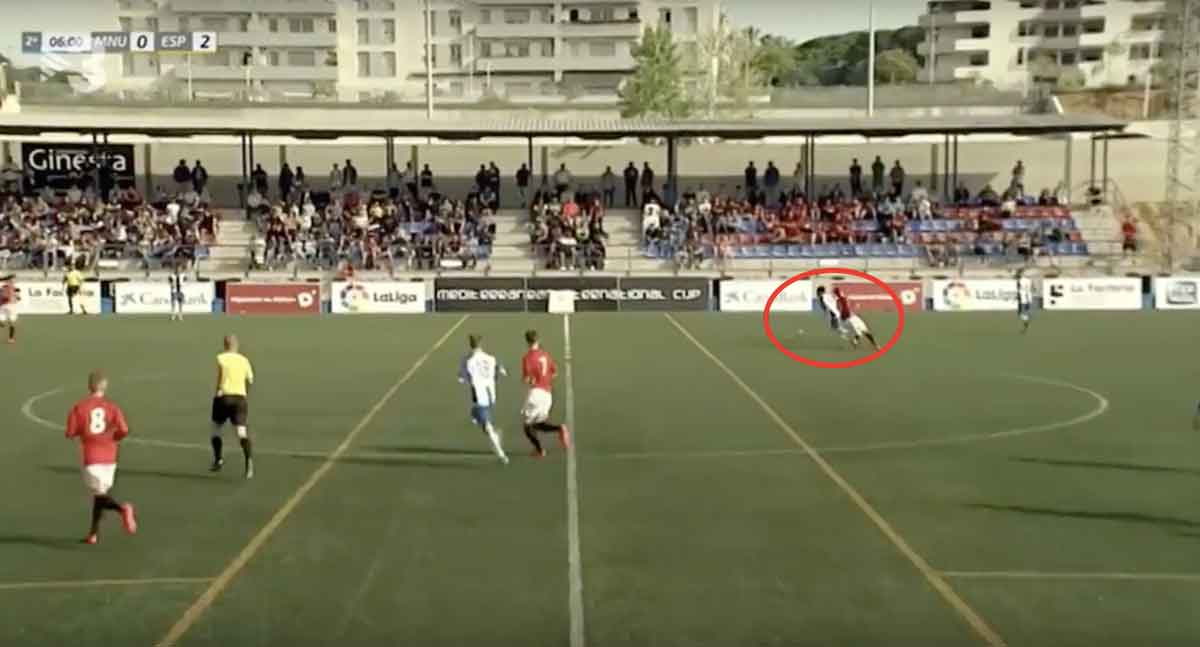 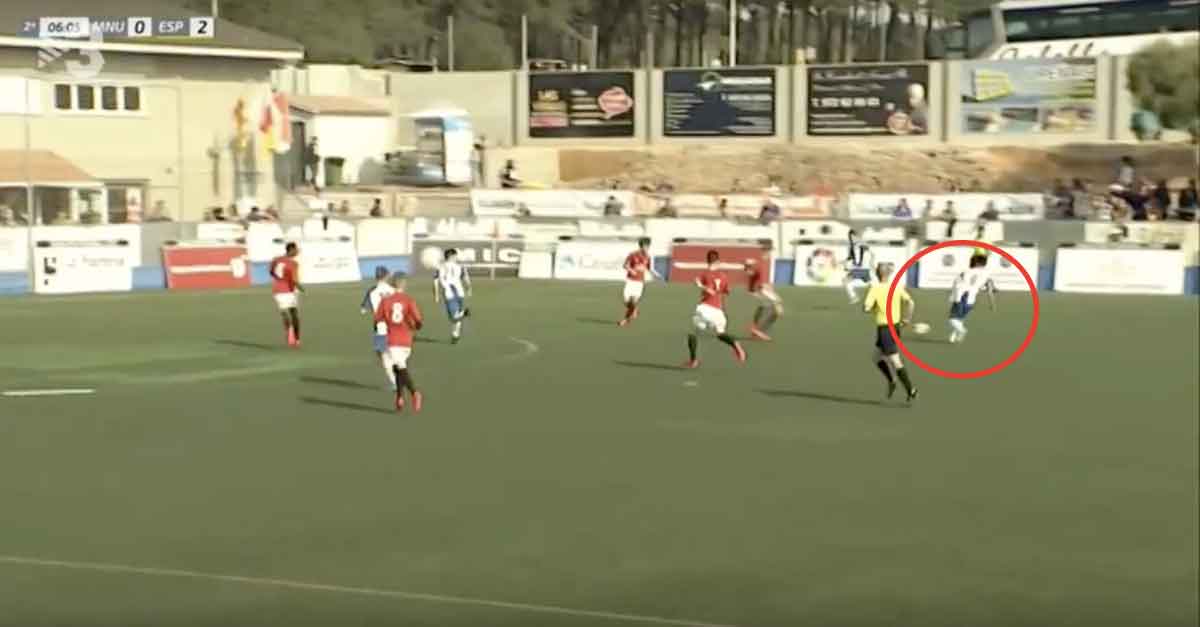 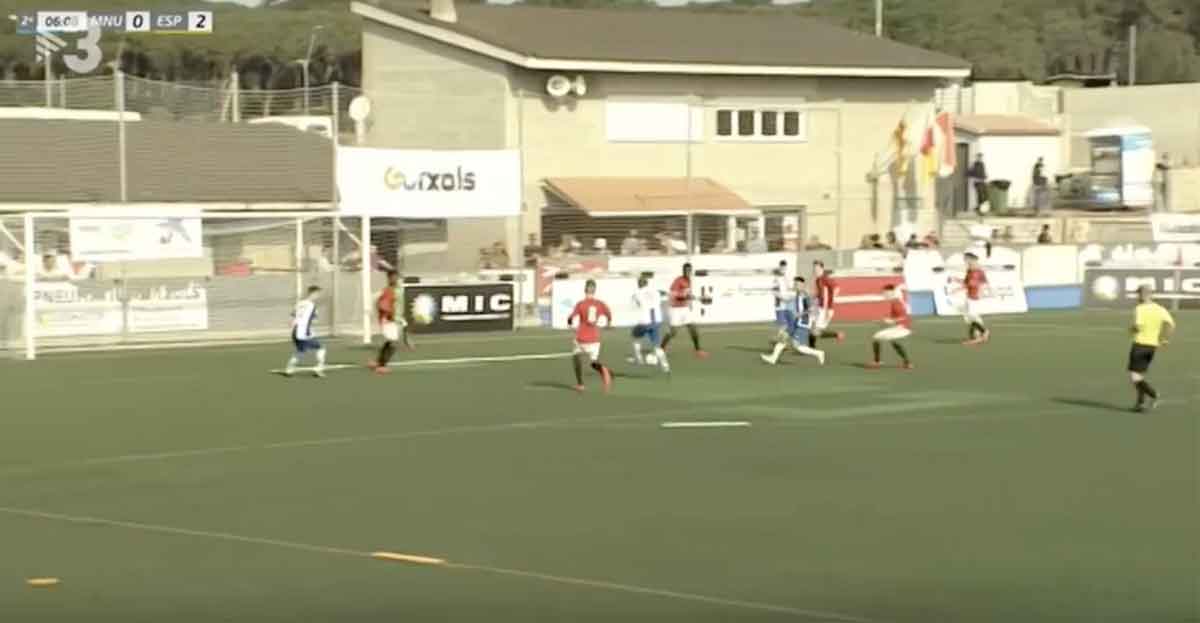 Puigmal may not have scored, but his box-to-box style meant he was heavily involved in the third goal which really killed off the quarter-final.

He picked up the ball in his own half, with his first touch taking it away from his opponent, before bombing into the Manchester United half and laying it out wide to Jofre Carreras, who slid it across the box before it was fired home. 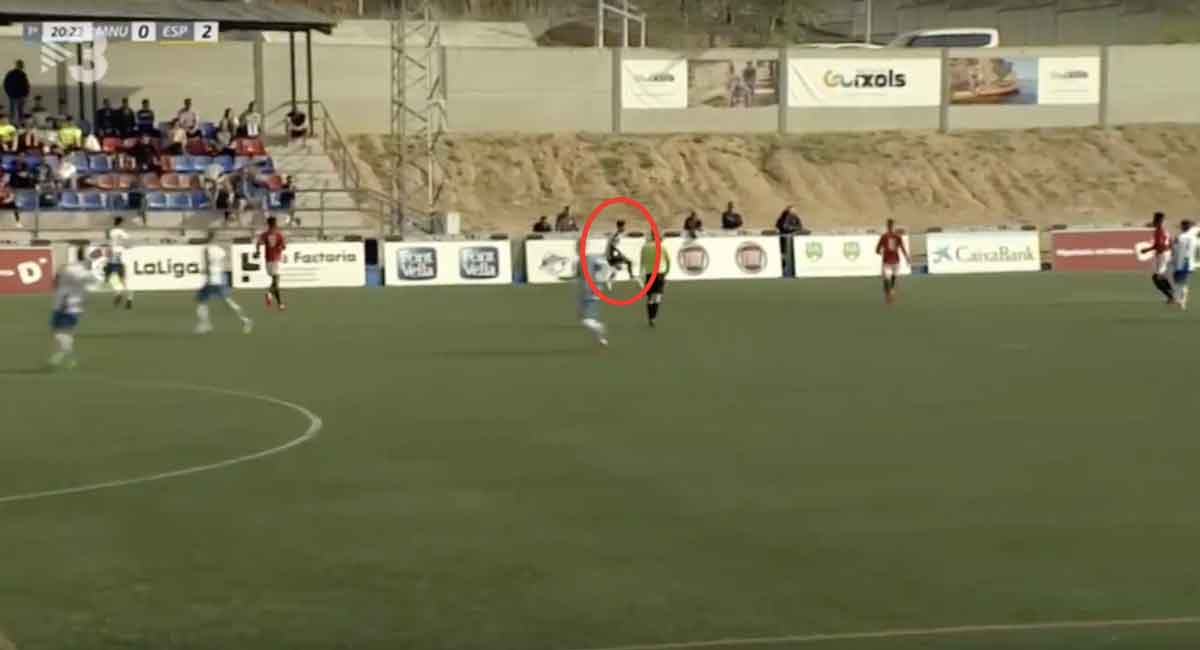 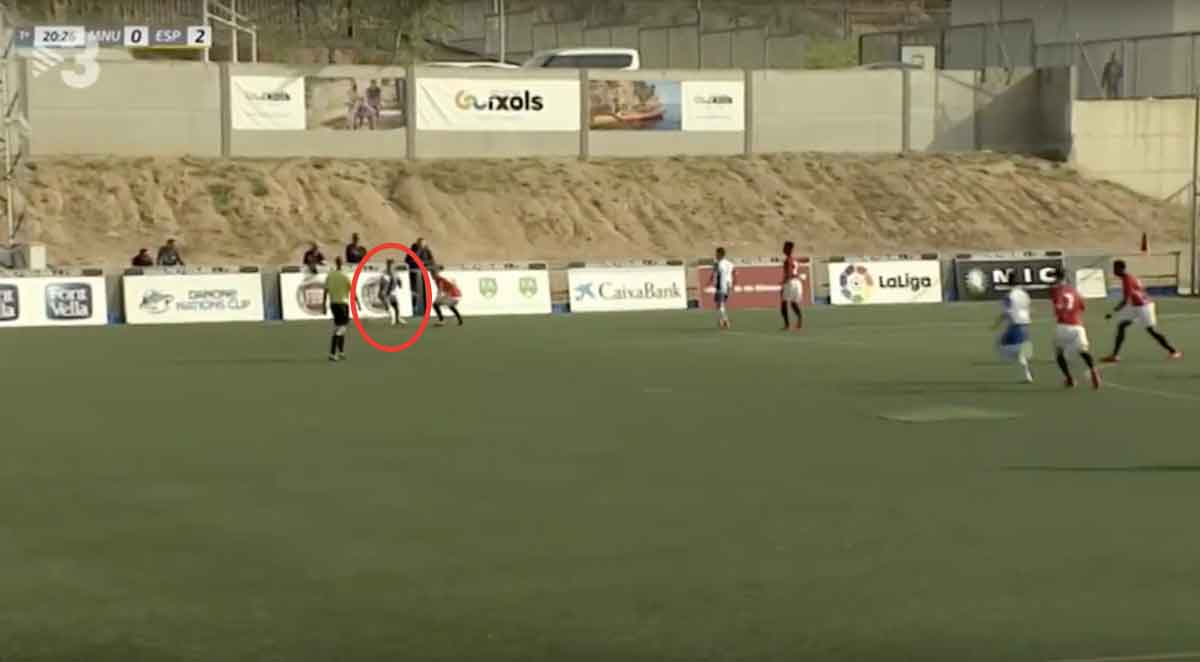 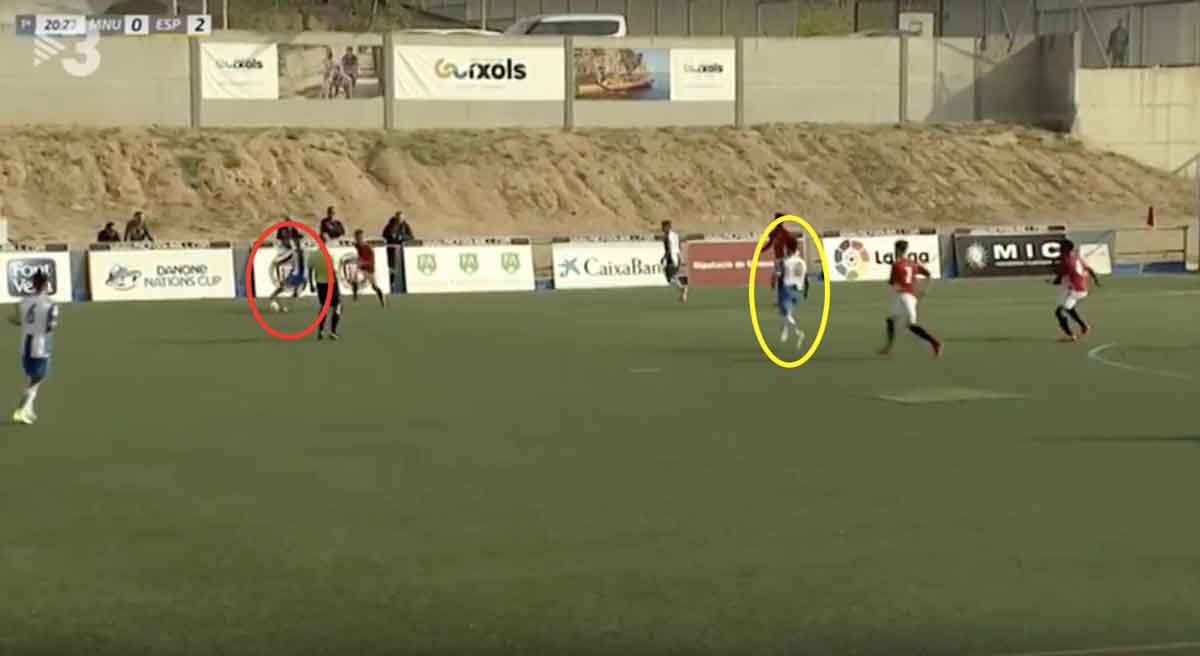 But he’s not all about quick breaks, he’s about quick feet and an incisive pass too, as you can see above, where he picks the ball up, draws the Manchester United defender in, before playing it to his team-mate (circled in yellow). 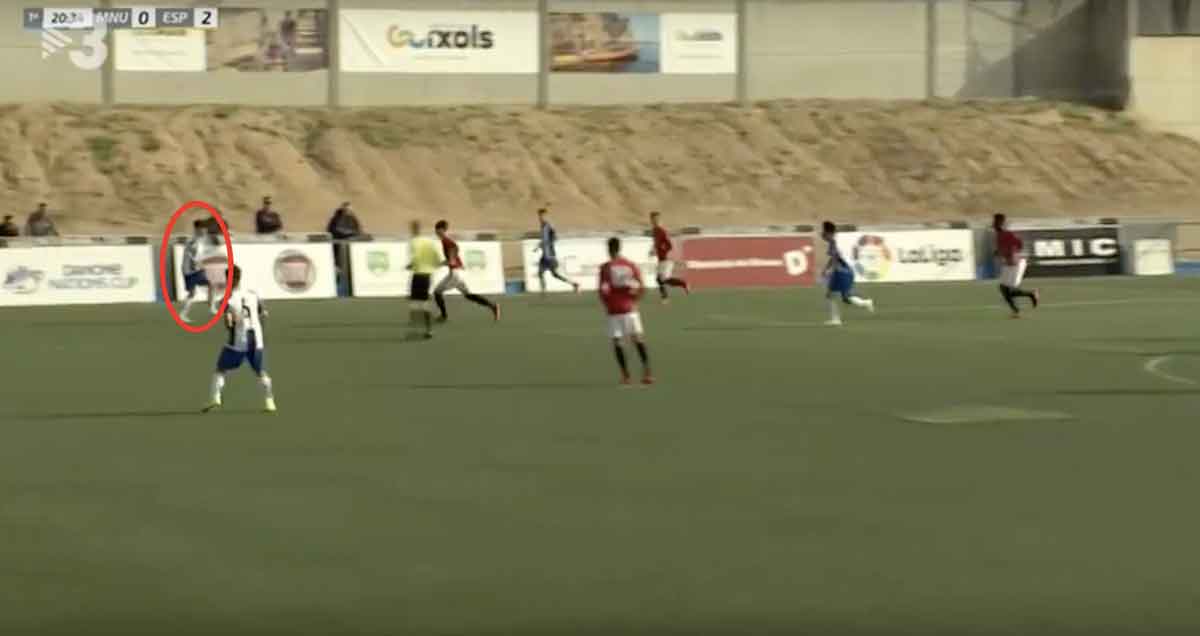 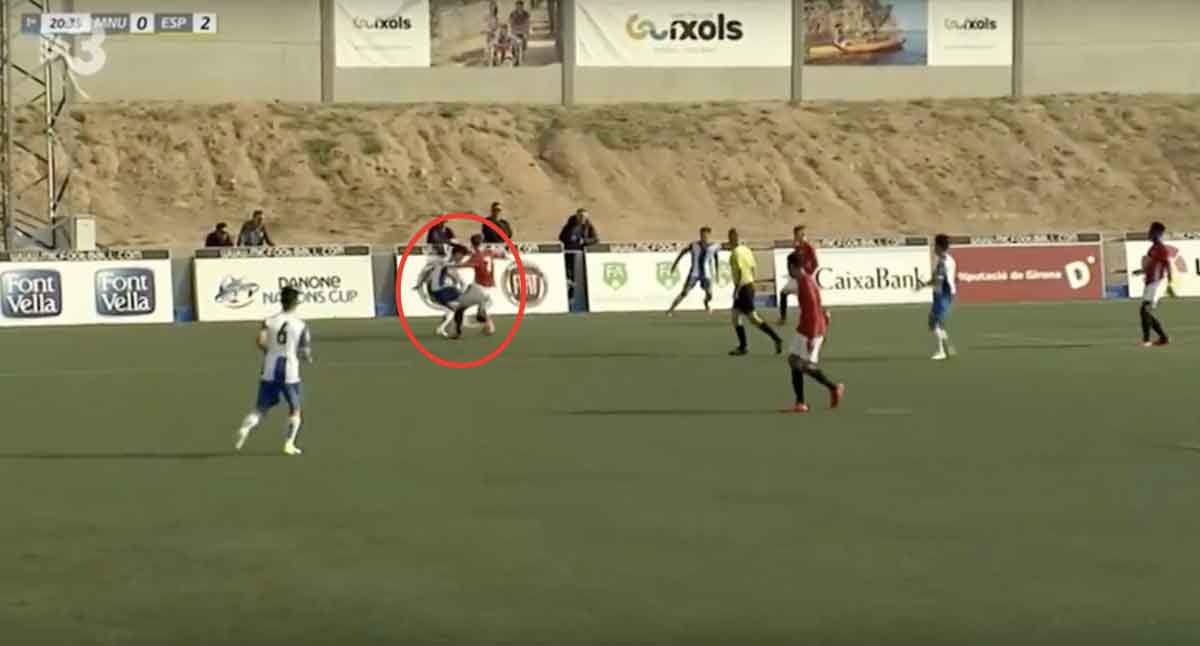 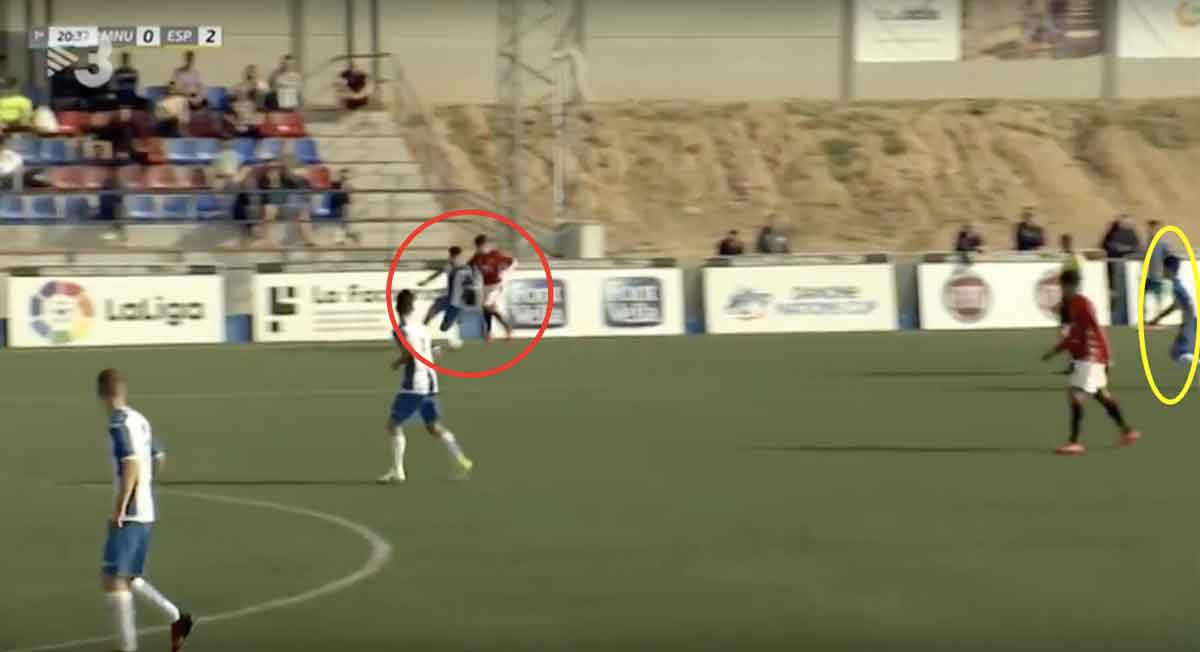 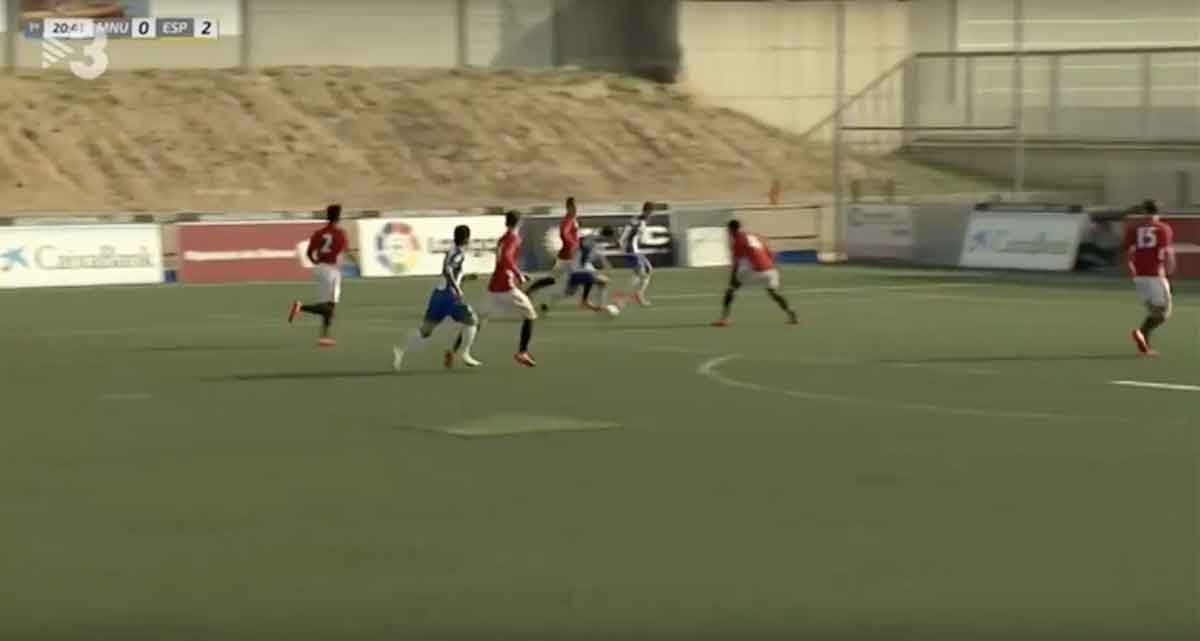 And when the ball found its way back to him just seconds later, he demonstrated his ability on it again, drawing the United defender one way before taking the ball past him in the other direction and playing it into a team-mate (circled in yellow).

This time, he didn’t stay out wide though, sensing the danger and running into the box as he collected the ball back after the one-two, and was unlucky not to get a penalty as he took it past the static United defender.

His departure is a blow for Espanyol who saw him as one of the players in their academy most likely to make it to the first team, but it looks like their loss could be United’s gain.