Kepa Arrizabalaga is the latest Spanish goalkeeping sensation to be linked with a host of top European clubs. He follows in the footsteps of compatriot David de Gea who was courted by Europe's elite during the 2010/11 season.

He eventually moved to Manchester United in a deal worth £20million and is now considered to be one of of the best goalkeepers in the world. And now, seven years later, it could be his next move which has an impact on where Arrizabalaga ends up this summer.

The Athletic Bilbao shot-stopper has really caught the eye since replacing the long-serving Gorka Iraizoz between the sticks at the San Mamés stadium. Iraizoz made over 300 appearances for the club and was considered to the the clear No.1 until the emergence of Arrizabalaga relegated him to the bench. He's now plying his trade for Girona.

That alone highlights the impact the 23-year-old has had already on the Basque club. However, unfortunately for Athletic, it's unlikely their new first choice keeper will follow in the footsteps of his predecessor to be with the club for the long-term.

His current deal expires in the summer of 2018 and, even though there is a contract offer on the table, it's looking likely that he'll move onto bigger and better things.

Despite what Iago Herrerin, the man playing second fiddle to Arrizabalaga for Bilbao, is saying: “He is young but he is level-headed and it makes total sense that teams have registered an interest in him, that is normal,”.

Herrerin told Marca: “Interest in him is logical, but he is Athletic Club until death.”

Now, Arsenal and Chelsea are supposedly eyeing the Spanish international up but it's Real Madrid who are reportedly frontrunners for his signature. So claims Spanish journalist Pipi Estrada who believes Zinedine Zidane's men have already reached an agreement with the Athletic Bilbao stopper as they continue on with their Spanish recruitment drive.

He recently told a Spanish TV show: “Kepa and Real Madrid have already reached an agreement.”

However, you can't help but feel Madrid would want a star name to come in to replace Keylor Navas. They've held an interest in de Gea for a number of years now and if there's a chance they can still land him then it's highly unlikely they'd give up on him.

A close second to the Man United keeper would be Chelsea‘s Thibaut Courtois. The Belgian spent three seasons on loan with Real's rivals Atletico before returning to Stamford Bridge to displace Petr Cech.

He regularly impressed but it's no secret that he would like to return to Spain one day. He's kept his home there and his former girlfriend and two children reside in the Spanish capital.

He has often discussed moving back to Spain, saying in 2016: “From the first minute I loved Spain for its people, the way of life, the food. Today I still have the food and eat dinner late, the siesta, the television I watch most is Spanish. I feel half Spanish.

“The three seasons at Atletico made me the goalkeeper I am now. When I said goodbye I felt bad, it’s not easy to make me cry.

He has just 18-months remaining on his deal and is thought to be holding out for close to £200,000-per-week, something Chelsea are reportedly dragging their feet over. Despite playing for Atletico it is believed Courtois wouldn't be against moving to the Santiago Bernabéu.

If either of the two do end up at Real Madrid then their club will be looking for a new No.1 and Kepa could be heading to the Premier League.

Man United have experience nurturing a talented Spanish goalkeeper and it's unlikely he'd be exposed at Old Trafford – with the club conceding just the 3.67 shots on target per 90 minutes – meaning Arrizabalaga would be able acclimatise to the rigours of the Premier League without the team suffering.

Likewise, Chelsea under Antonio Conte aren't the type to leave their goalkeepers exposed. His team concede just the 3.17 shots per 90 minutes, the fourth fewest in the league behind only Manchester City, Spurs and, surprisingly, Liverpool.

Arsenal are in the market for a long-term replacement for Cech and Mauricio Pochettino may look to bring Arrizabalaga in with Hugo Lloris facing questions over his performances over recent months.

Then there's Liverpool. The Reds still need a reliable No.1 with Simon Mignolet's inconsistency costing them points. Loris Karius hasn't done enough to regain a starting position for Premier League matches and Jürgen Klopp's men could do with some continuity between the sticks. Former Liverpool ‘keeper Pepe Reina could put in a good word for them perhaps.

Is Kepa worth the hype?

Without doubt. He may only be 23 and have fewer than 50 club appearances to his name but for most other countries he'd be their first-choice goalkeeper now. It's just unfortunate for him that de Gea is in his way and will probably continue to be so for the foreseeable future.

His ability is there for all to see and even though Athletic Bilbao find themselves in 16th position in La Liga they're actually overperforming in terms of goals conceded. The xGA rating looks at the quality of chances a team have conceded and gives the a rating out of one for the likelihood of it being a goal.

They've conceded 16 goals this season but their xGA is 19. They're one of only seven clubs in La Liga to be outperforming their xGA and a lot of this is down to genuinely world class saves Arrizabalaga continues to make.

Last season, when Iraizoz was phased out,  their xGA was level with what they conceded and the season before that, the 2015/16 season, they finished four goals worse off.  The swing won't all be down to Arrizabalaga but to pretend as though he's not playing a huge part in this would be naive.

Standing at 6ft 1ins, he manages to put his gangly frame to use. He's quick over his line and it means he's often appears to fill the goal. 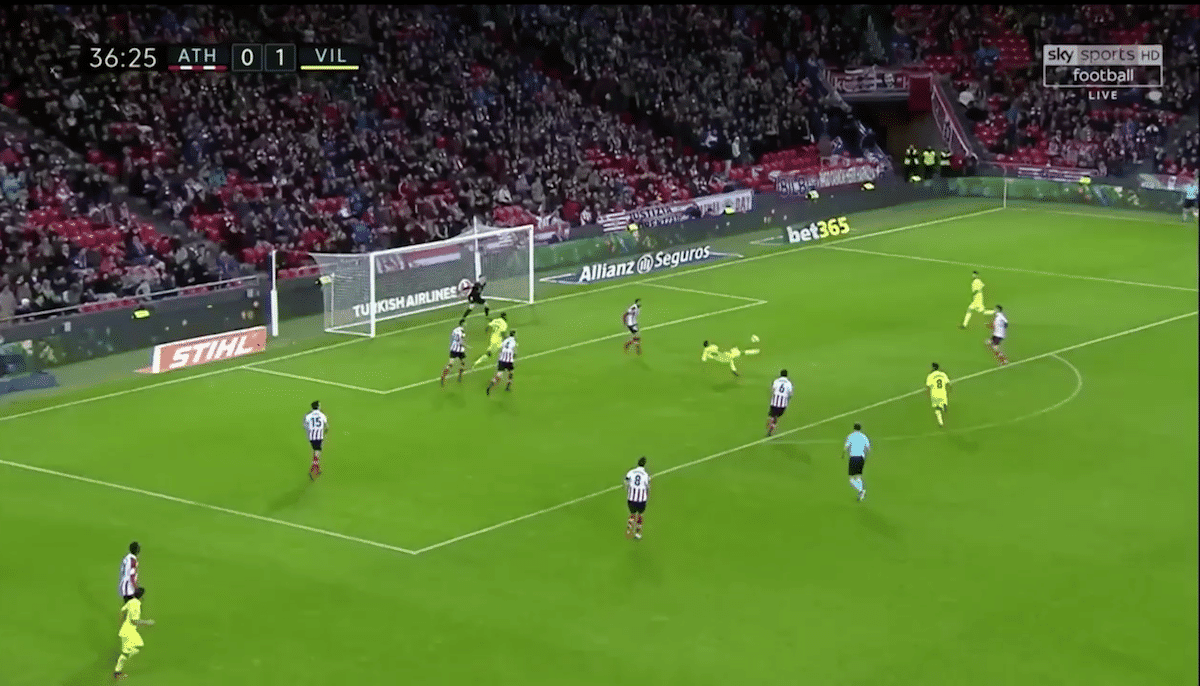 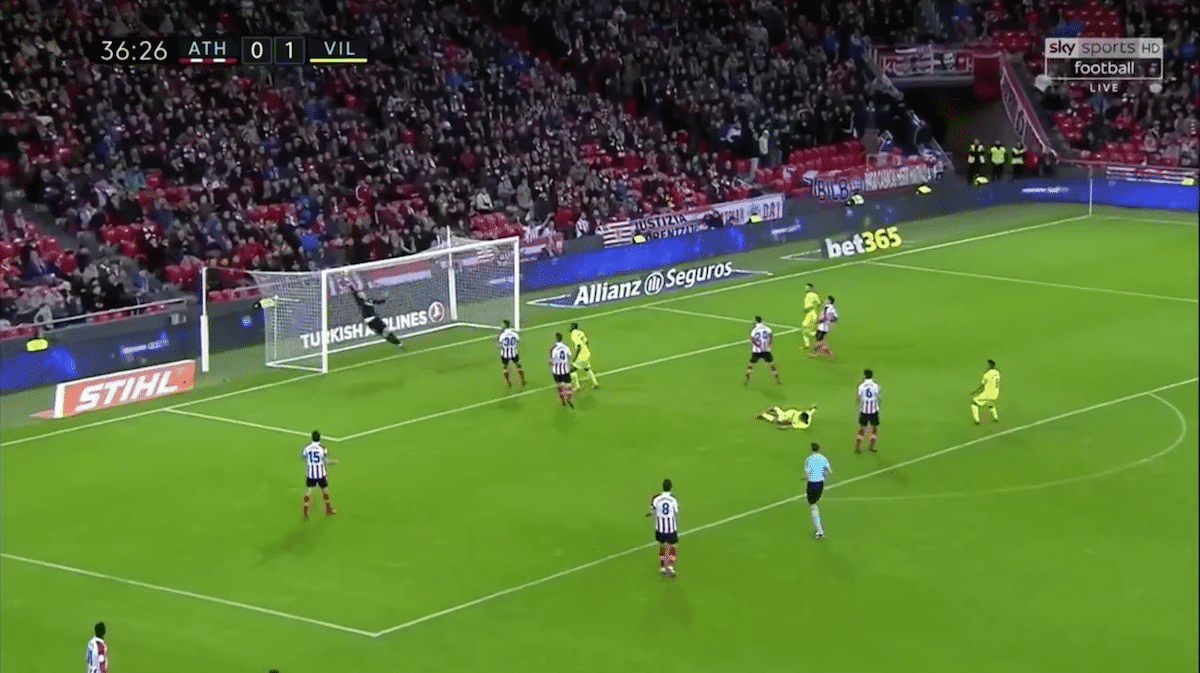 In the two stills above you see him pulling off a superb save to thwart Carlos Bacca from finding the back of the net with an athletic attempt. In the initial picture you see the ‘keeper readying himself for a volley, he's set to get down quickly if necessary.

However, Bacca manages to lift the ball and it's heading for the top corner. Arrizabalaga manages to adjust and scrambles across his line to claw the ball away. It's a save not many would be able to make.

He's also quick off his line and isn't shy about getting involved in 50/50s. He doesn't hesitate either and as a ‘keeper that can be the difference between making a save and picking the ball out of the back of your net. He makes a decision and he commits.

Furthermore, he has a tendency to use his legs to make saves which is rarer than you’d think. Back at the start of the season you saw Hugo Lloris beaten by a Marcos Alonso shot against Chelsea after he tried to dive to save it instead of using his legs. You see it happen to ‘keepers throughout the season. 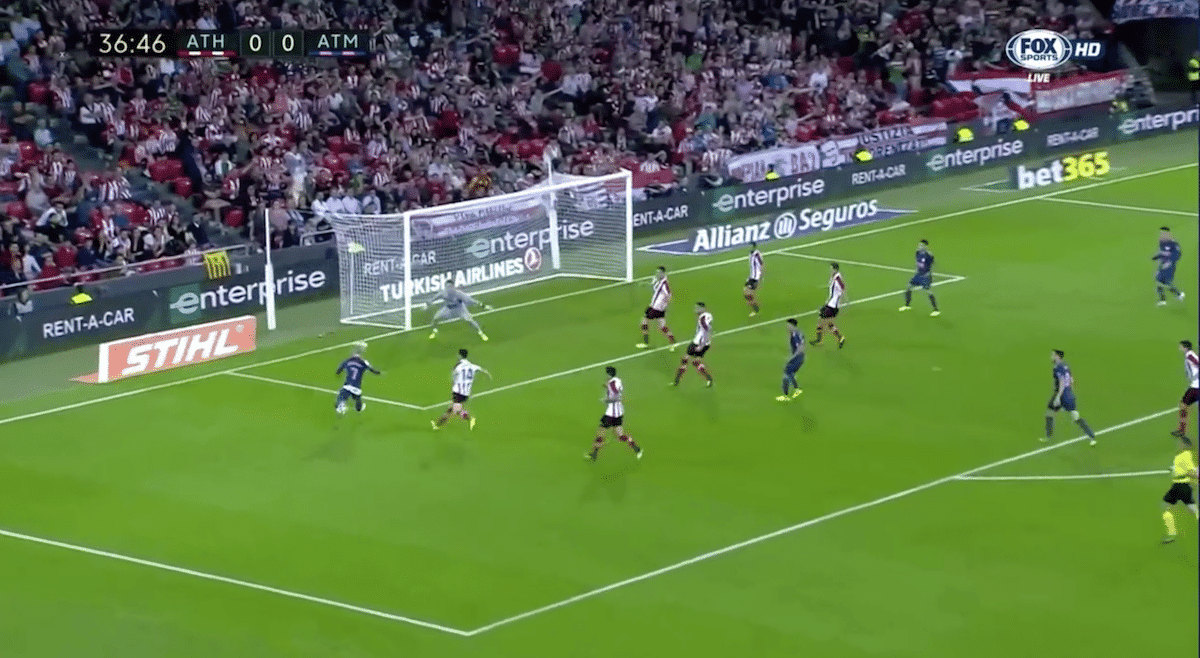 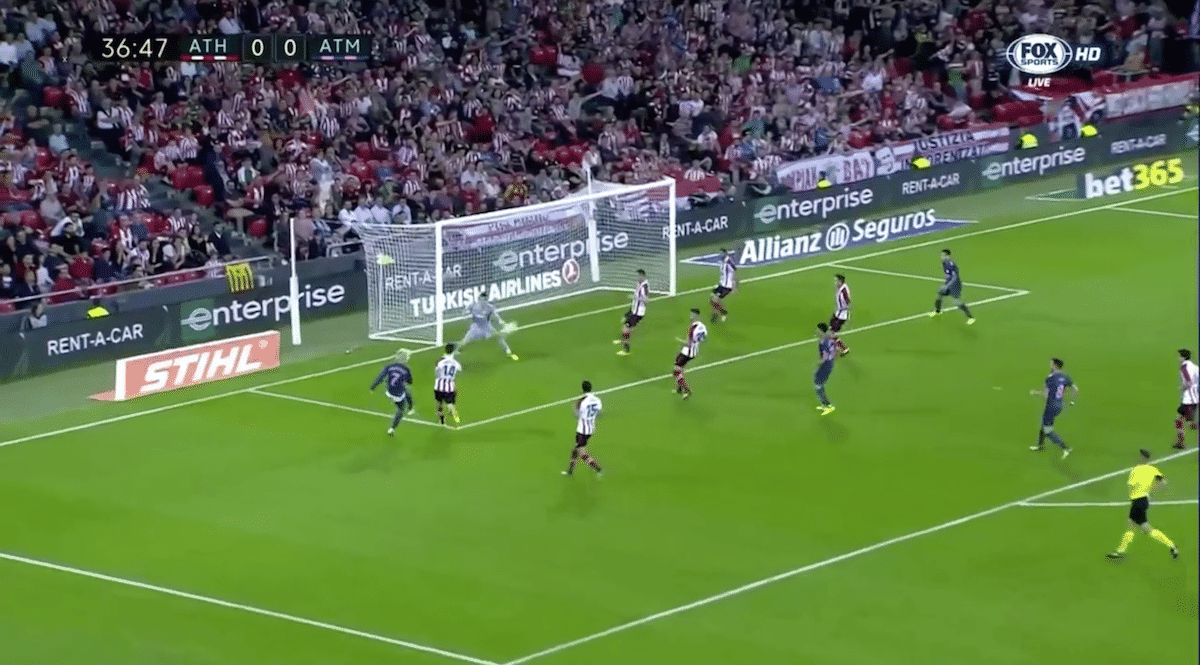 But in the above pictures, taken from Bilbao's match against Atlético Madrid, you see Arrizabalaga staying big initially so not to give Antoine Griezmann more of the net to aim at. He's able to do this because he's not against using his legs to save shots. The French forward drills the shot goal-wards and, to the dismay of Griezmann, the ‘keeper gets his knee to it.

There are question marks over his passing game but that's mainly because for his club side now he regularly looks to play the ball long. However, he does that because it's one of their strengths and what's noteworthy is just how accurate he is with the long passes he plays. There's no reason, when he's that good at spraying passes 60-70 yards, that he could act as a third centre-back for a possession based team.

Clubs should be lining up to sign him in January but not on a pre-contract. Athletic Bilbao have to sell otherwise they lose him on a free. They could make an easy £20million during the winter window and teams will pay that. They're getting a first choice goalkeeper for the next decade and it works out at great value for money.