Sampdoria's reputation for producing promising young players is no new thing. It was there, in the Genoese club's youth academy, that Mauro Icardi honed his craft. Now Italian football's most accomplished marksman, he owes a debt to the education he received at Samp.

So, too, do Arsenal duo Shkodran Mustafi and Lucas Torreira, while Martin Škriniar earned a big-money move to Inter last year after excelling at centre-back for the Blucerchiati during the 2016/17 season.

Such a path is predicted for Joachim Andersen, who is being linked to several of Europe's top clubs following a string of impressive displays for Marco Giampaolo's side in Serie A.

Signed from FC Twente in 2017, the Scandinavian initially struggled to break into the first-team and started just six league games last season.

The current term has been a wholly different story, however, with the Denmark Under-21 international firmly established in the starting XI alongside Lorenzo Tonelli.

His performances have been far from flawless but Andersen has offered compelling evidence that he will soon follow Škriniar out of the Stadio Luigi Ferraris and feature in the Champions League.

When that time comes, he will not be short on suitors. Inter appear to be the frontrunners for his signature, but Manchester United, Tottenham Hotspur and  Borussia Dortmund have all been touted as potential future employers.

Who is Joachim Andersen?

Born in the town of Solrød Strand on Denmark's east coast, he cut his teeth at Greve Fodbold before joining FC Copenhagen's youth ranks in 2009. After a productive four-year spell with Denmark's most decorated club, the young defender moved west to FC Midtjylland.

Although Copenhagen cannot be rivalled in Danish football when it comes to trophies and stature, Midtjylland, whose revered academy had already churned out gems promising players such as Viktor Fischer and Pione Sisto, offered to Andersen the chance to receive a first-class footballing education.

It worked, too, as he flourished in the Danish farmlands, attracting scouts from a host of European clubs. And it was FC Twente, hugely impressed with what they had seen, who won the race for his signature. As one of their prized assets, Midtjylland were loathed to accept Twente's advances but it represented an opportunity for the player to accelerate his development.

Integrated into Jong FC Twente, the reserve arm of the Eredivisie side, he broke into the senior set-up under Alfred Schreuder before cementing his place under René Hake.

By that stage, Andersen had made significant strides in his development to be an impressive ball-playing centre-half with an appetite for self-improvement.

And he continued on an upward trajectory to the point where he became an important figure in the Denmark Under-21 side and prompted Samp to move for him in August 2017. He is now indispensable, having played every minute of the current Serie A campaign.

What are Andersen's strengths?

Standing at 6ft 4ins, he possesses an obvious height advantage over the vast majority of his opponents.

However, he is much more than a mere totem in Sampdoria's back-line. Alongside Tonelli, he has helped shore up a defence that shipped 60 goals in Serie A last season, bringing their goals conceded per 90 down to 1.0 from 1.57.

In the 1-0 win over Atalanta in October, Andersen made nine interceptions and nine clearances as well as winning four out of his six aerial duels, putting in the kind of dominant and mature display that belies his inexperience in one of Europe's top five leagues.

Defending his box, he is sharp and decisive, but his heat map suggests that he is comfortable pushing higher up the pitch and picking out midfielders or runners further forward with his excellent passing skills. As you can see below, Andersen is very active in open play from 30 yards and further out from his own goal. 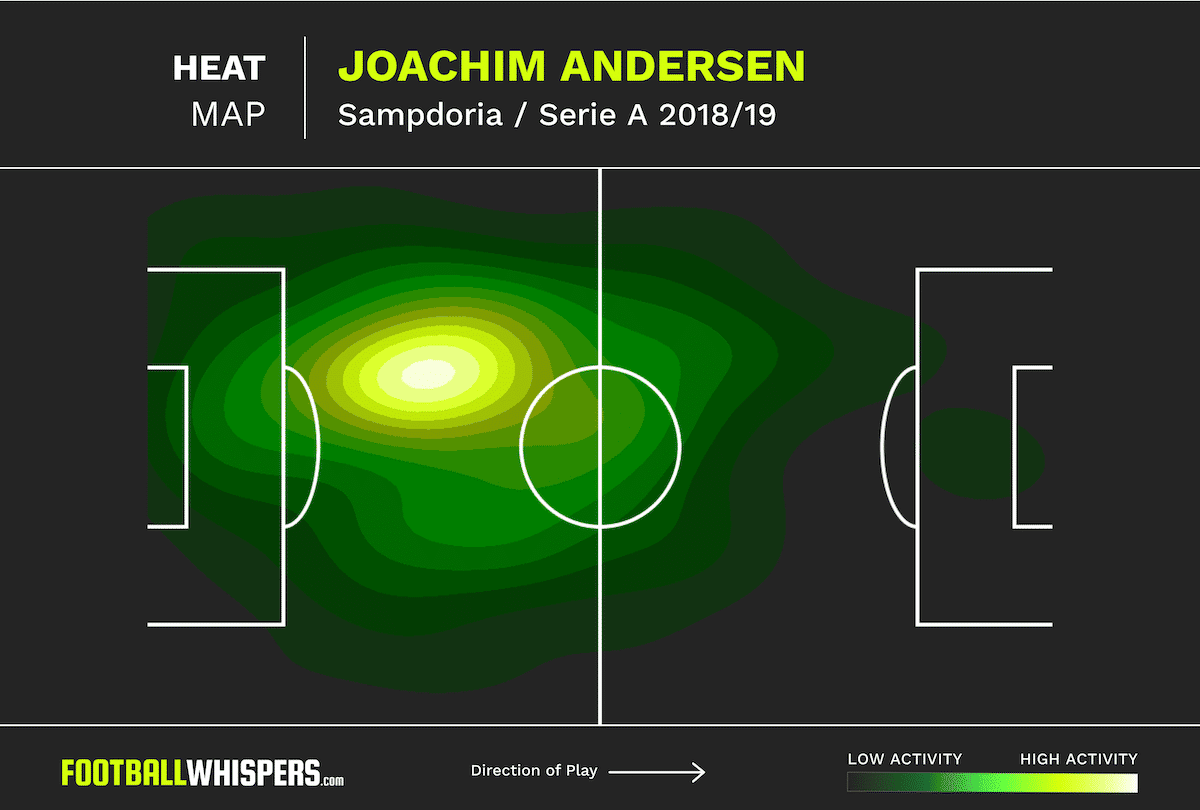 From this base position, he has been able to showcase his abilities as a ball-playing defender in Italy's top flight. He is ranked just outside the top ten for accurate passes per 90 with 54.81 and is also inside the top 20 for forward passes. Strikingly, he averages 9.18 long balls per game too, suggesting that his vision and passing range often allows him to trigger attacks.

While only a mere snapshot, the following sequence captures the confidence and incision with which Andersen passes the ball. In the first image, he drops deep – virtually to the by-line – to offer Samp goalkeeper Emil Audero an outlet. 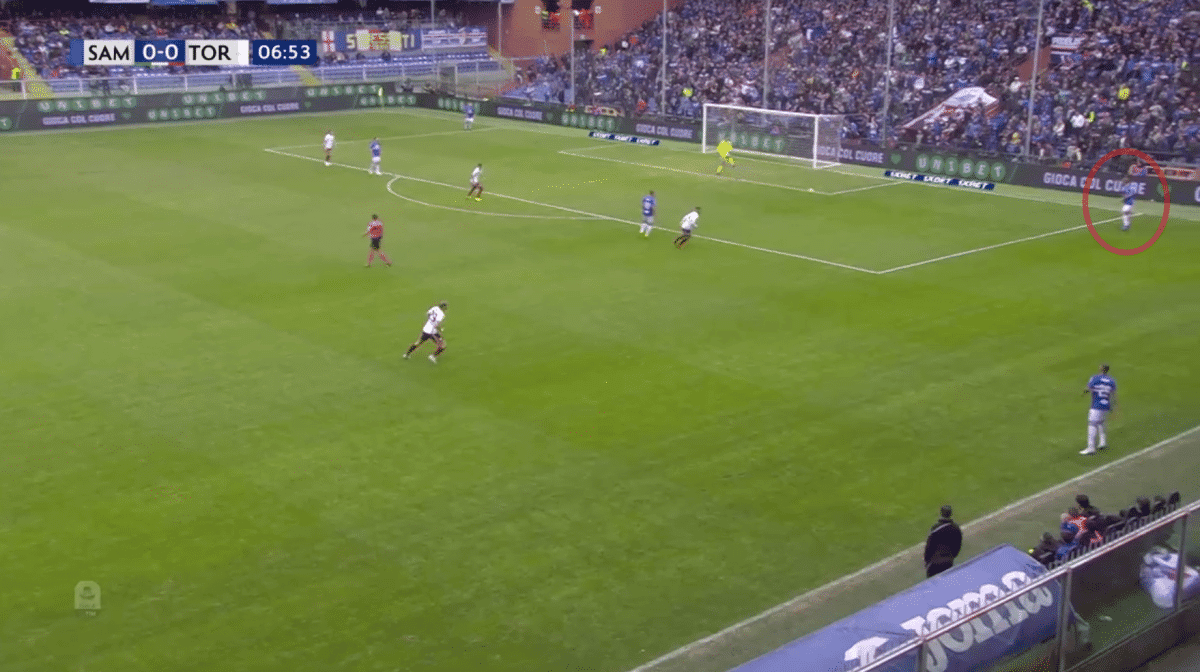 Looking up, he assesses the situation. Seeing that left-back Nicola Murru is covered.

In the below screenshot, he notices his defensive partner Tonelli drift into space on the edge of the box. Despite the presence of three Torino players lurking with intent, Andersen has the composure to fizz a pass across his own penalty area and into Tonelli, who subsequently launches an attack. 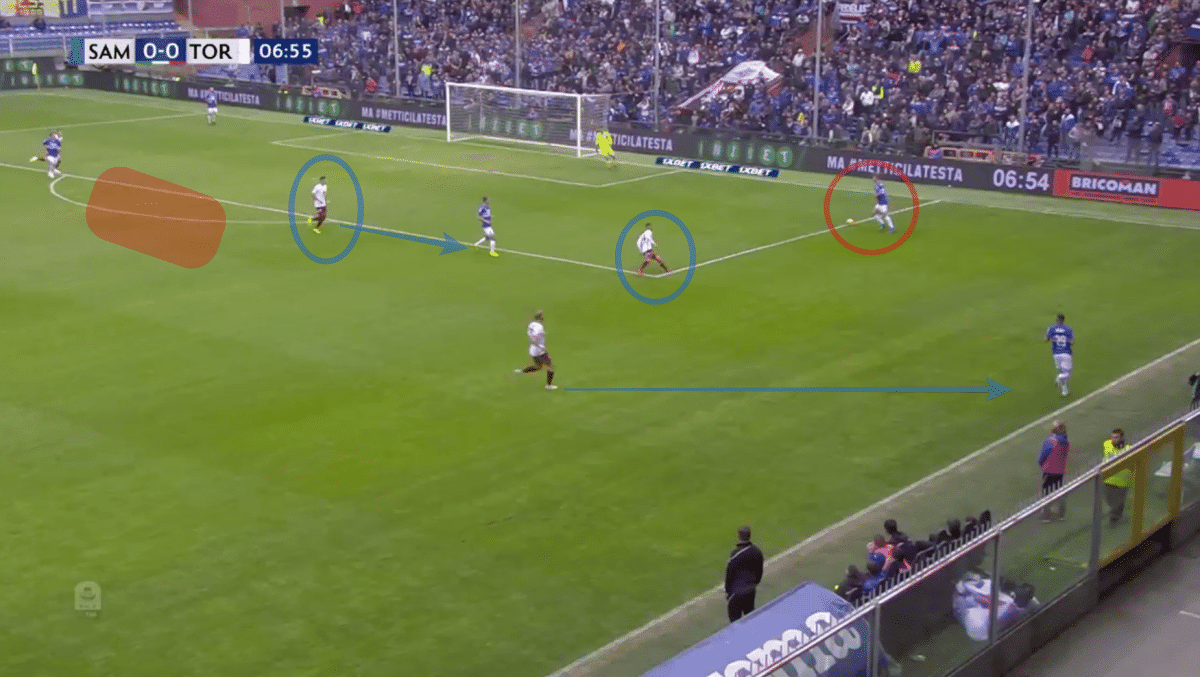 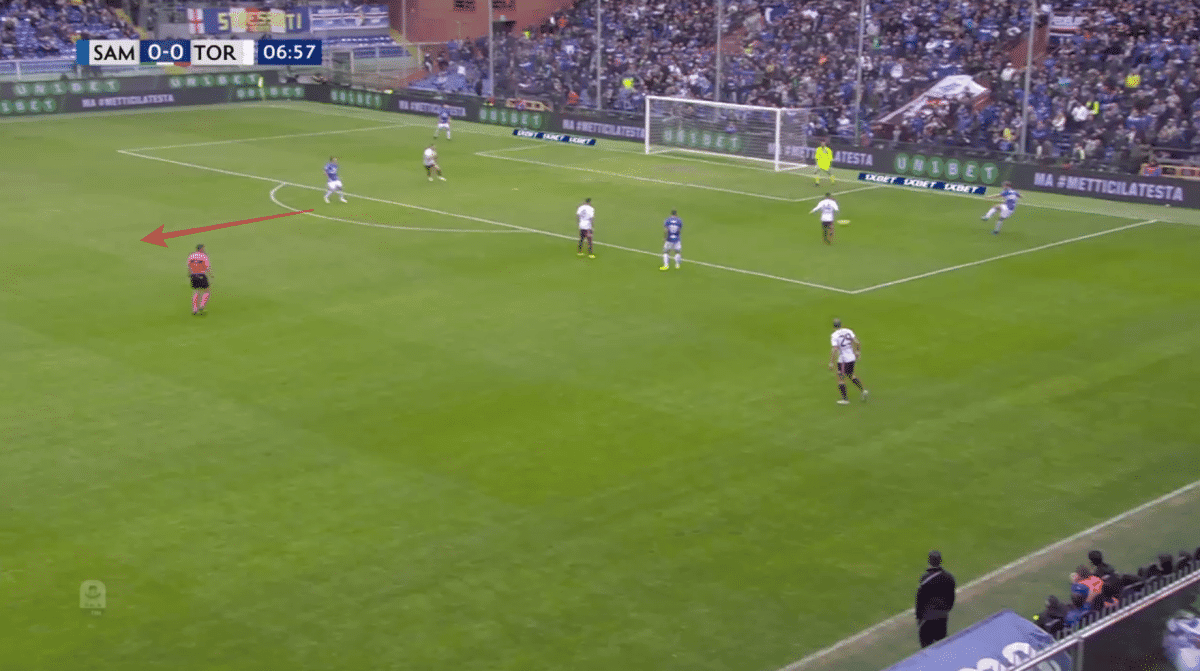 The ability to distribute the ball quickly and intelligently has become increasingly valuable for defenders in the modern era, but the Dane has been honing the technical side of his game from his time at Midtjylland. While some managers dissuade their defenders from taking risks on the ball, others encourage a progressive attitude towards passing.

With that, it's easy to imagine the 22-year-old slotting into a team like Juventus, a unit in which Leonardo Bonucci is afforded the freedom to express himself and find the likes of Cristiano Ronaldo and Paulo Dybala up front with searching balls.

His skillset proves that comparisons to Škriniar have credence to them. They are more than just two defenders who have played for Sampdoria. They are similar, stylistically, in how they read the game, in how they map out sequences in their head before they play a pass.

What are Andersen's weaknesses?

As mentioned earlier, Andersen has been impressive, not flawless. He endured a difficult time in Sampdoria's 4-1 defeat to Torino up against a ruthless strike duo in Andrea Belotti and Iago Falque, who combined to score three goals and notch an assist.

Although not a weakness, he will hope to improve his tackling statistics, with a fairly modest 1.36 per 90 seeing him down in 39th in the rankings.

Not overly quick, the centre-back can sometimes be undone against attackers blessed with a blistering turn of pace, especially if they dart in behind Samp's high back-line.

However, as he has already demonstrated, with astute positioning, a lack of speed will not hold him back. 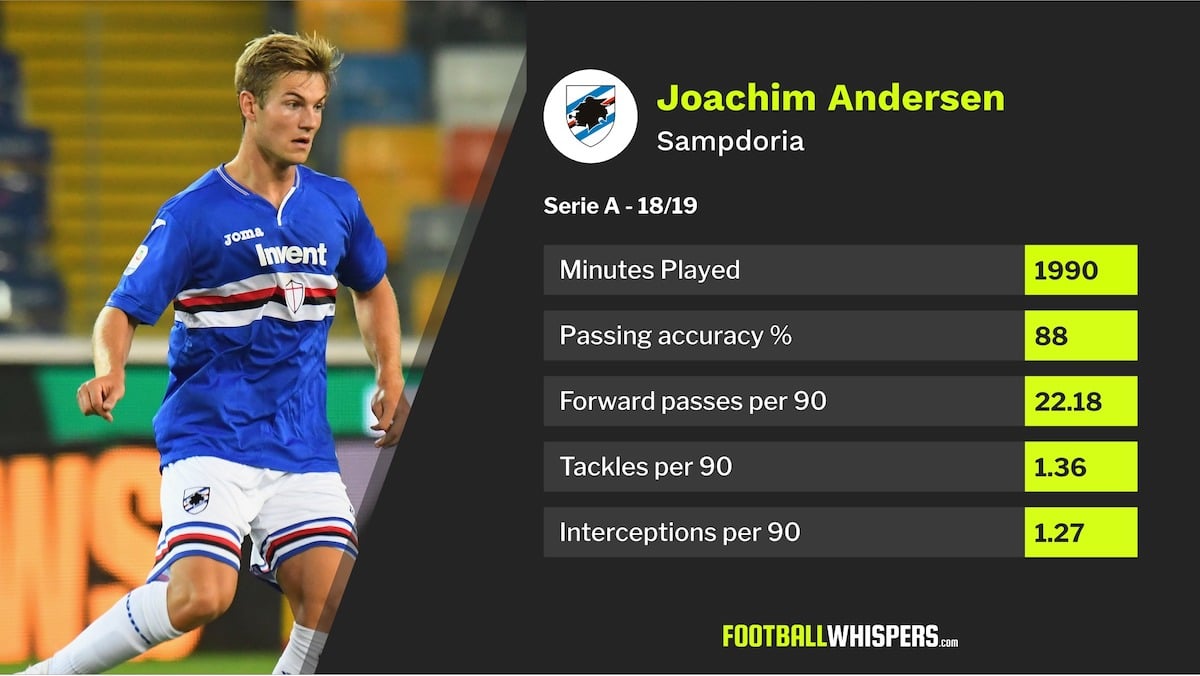 Andersen is a good centre-half; he will soon become a great one. His rise to being one of the most highly regarded prospects in Italy – a land where good defending has always been cherished – bodes extremely well.

Of course, we are, at the time of writing, not even a third of the way into the Serie A season. The key now is to continue in very much the same vein, although his mettle will be tested after that humbling afternoon against Torino in two of the most intimidating fixtures on the calendar: a trip to Roma before his first taste of the Derby Della Lanterna away to Genoa on November 25.

With a host of clubs closely monitoring his progress, his performances in pressure-cooker environments like the aforementioned two games will tell us a lot about his mentality.

Clearly talented, another handful of impressive displays in the heart of the Samp defence and Andersen may be headed to one of Europe's elite clubs before long.