Benfica had been the better side, of that there was no doubt. Yet Sporting had defended stoutly. Attacks were repelled, efforts on goal pushed away by Romain Salin.

Águias boss Rui Vitória had a decision to make. He'd already introduced the talented Andrija Živković but the Serbian hadn't been able to unlock the visitors' defence.

So Vitória went for broke. He made a double change. On came the experienced Haris Seferović and seconds later 18-year-old João Félix, who had played just 13 minutes of first-team football.

Vitória had rolled the dice but his bet was smart. Félix, one of the brightest young players in Portugal, needed just 15 minutes to make his mark.

A pass was knocked out wide to Rafa, who clipped a somewhat hopeful cross into the penalty area. Félix had drifted into the box and was unmarked around the penalty spot. Yet the ball wasn't put in his path.

Instead, he read the flight – the best attackers always do – before the central defenders, peeled off to the back post and headed the home side level. In doing so he made history: at 18 years, nine months and sixteen days old he became the youngest Benfica player to score in their maiden Lisbon derby.

Since that cameo, Félix, having overcome an ankle injury, has gone on to establish himself in the starting XI and has scored four goals in ten Liga NOS games.

Benfica have seen enough to know Félix is a star of the future. Yet so have others across Europe. Chelsea, West Ham United and Manchester City were linked earlier in the season. In October, Monaco reportedly had an offer of in excess of £20million turned down. And Manchester United are also interested, according to the latest reports.

The teenager signed a new contract in November which has seen his buyout clause rise to £105million. Of course, it's unlikely Benfica would hold out for such a fee but it would put them in a strong position. One they will need to lean on as the big offers will come for Félix sooner rather than later.

Who is João Félix?

Born in Visu, a city in Portugal's Centro Region, Félix's talent was recognised at an early age. He joined Os Pestinhas, a football school in Tondela, at which his father was a coach, at the age of four.

“In training, we had to put him with older players,” explained Pestinhas president Carlos Pedro Rodrigues. “And at under-9 he would play with the under-10s, yet wherever he went, everyone talked about him. He always took everything very seriously but was still humble.”

A player of Félix's talent doesn't stay a secret for long and at the age of eight he joined Porto's academy.

The versatile forward spent seven years with the Dragões but in 2014 was released. His talent was obvious but the club doubted whether he had the physicality required to make it at the top level.

A year with Padroense, a club in the Portuguese second tier, followed, in which the teenager grew into his frame, and he joined Benfica in 2015.

Félix's ascent through the academy system was rapid. And, as in youth, he often played with those far older.

He became the youngest player to feature for Benfica B, who play in the Portuguese second tier, when he made his debut at 16 years old. His first Portugal Under-21 call-up arrived when he was 17. And he began training with the first team in February before making his debut in August.

Capable of playing out wide, a No.10, a false 9, or as part of a front two, it won't come as a huge surprise that the Portuguese's biggest strengths are evident when he has the ball.

His technique and vision are flawless and that allows him to either ease beyond opponents or take an entire defence out of the game with a single pass.

The below stills are taken from Félix's second game for Benfica – a ten-minute substitute appearance in a Champions League qualifier against POAK.

The Portuguese side are, somewhat surprisingly, being held but they're on the counter and the teenager is leading the charge. 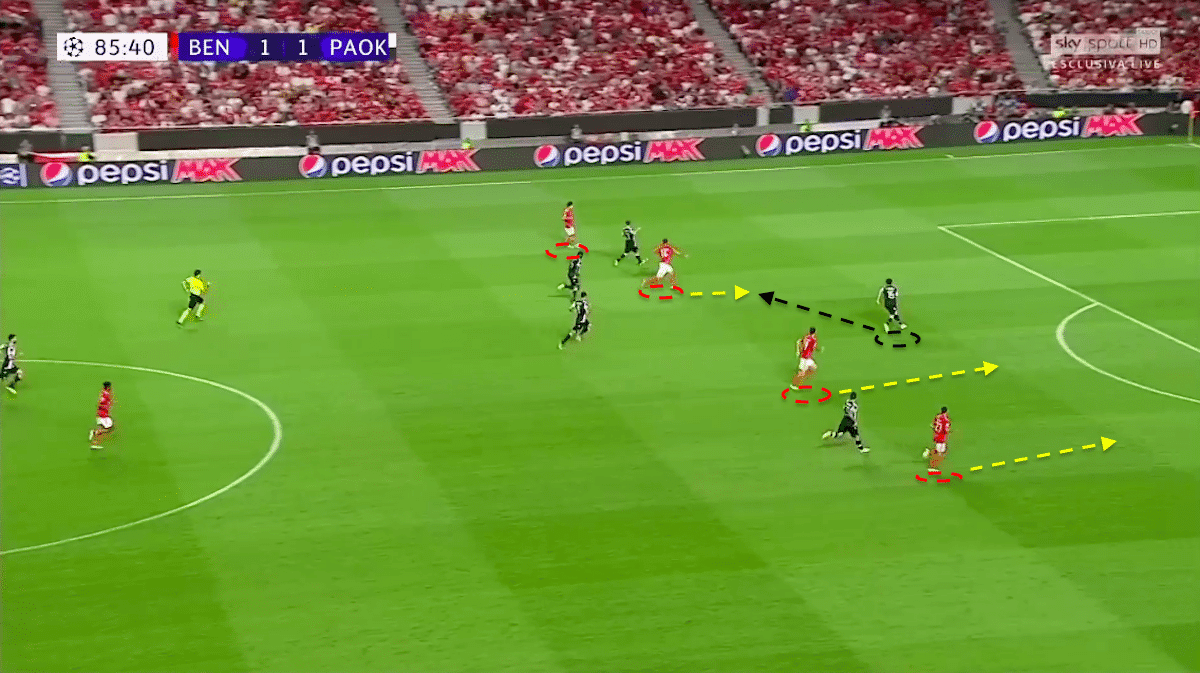 The easy pass would be to slip in Jonas. And the striker is demanding the ball as he breaks forward. Yet the picture in Félix's mind is very different.

Instead, he cuts back on to his right foot and opens up the pitch. He then threads an inch-perfect pass through to Ferreyra and the 27-year-old has a clear chance to win the game. 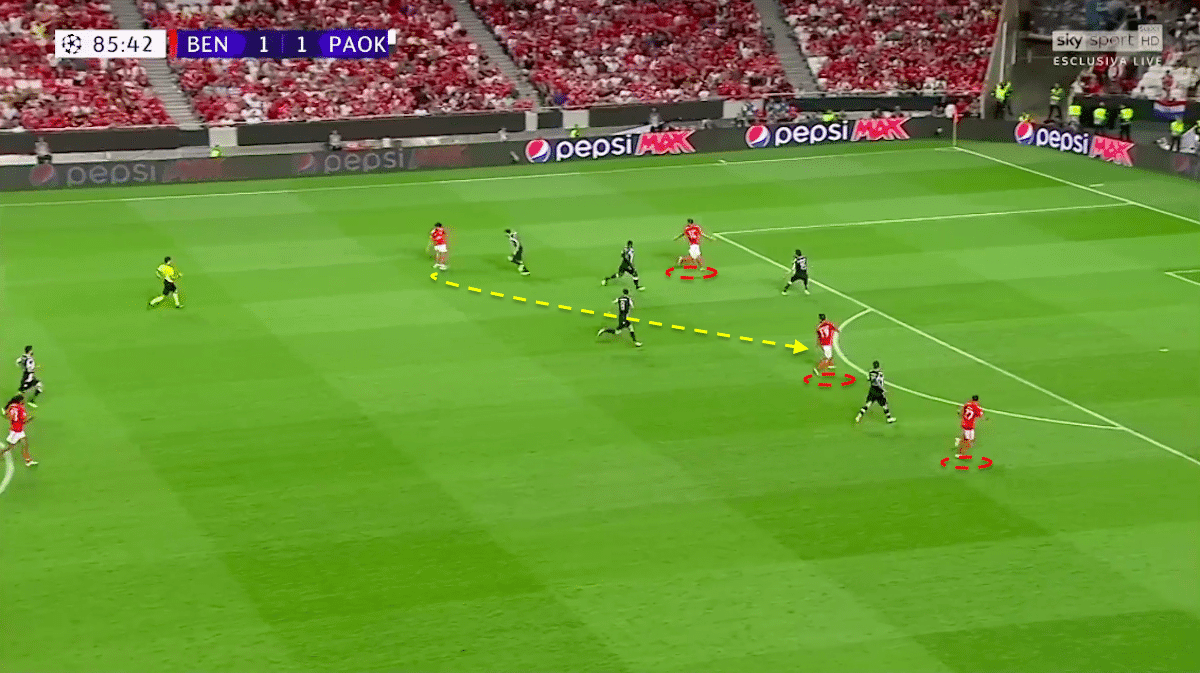 But Ferreyra's finish is poor. He shoots straight at Alexandros Paschalakis and the Greek side are able to clear and hold out for a draw. They were, however, beaten 4-1 in the return leg. 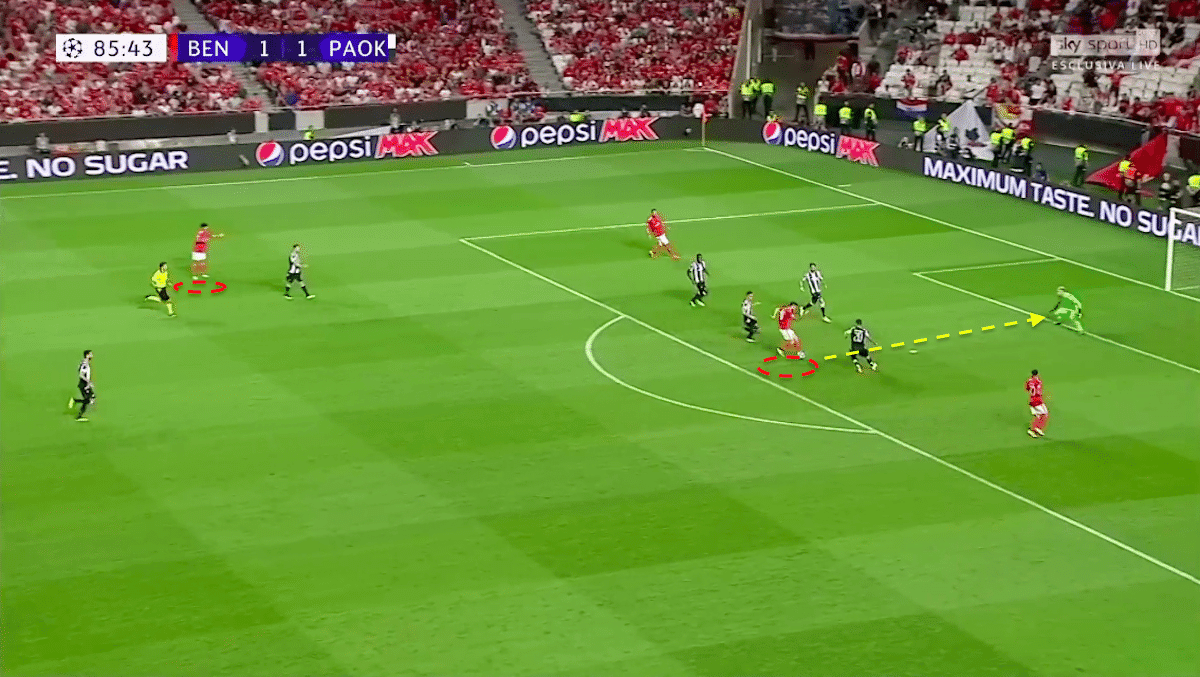 The above is just a snapshot of Félix's vision with the ball. He not only sees passes others don't but also has the ability to execute them. And with age his decision making will only improve.

Yet he isn't only an intelligent passer. He is able to break lines by weaving his way past opponents – you can see why the Silva comparisons were made – and demonstrated that brilliantly against Aves prior to his injury.

He collected the ball out wide but was quickly closed down. Many a player would pass on possession and attempt to find space. But Félix isn't an ordinary player.

Instead, as shown below, he nutmegs the first defender and does the same to the second. With that he is into the box and causing further problems. 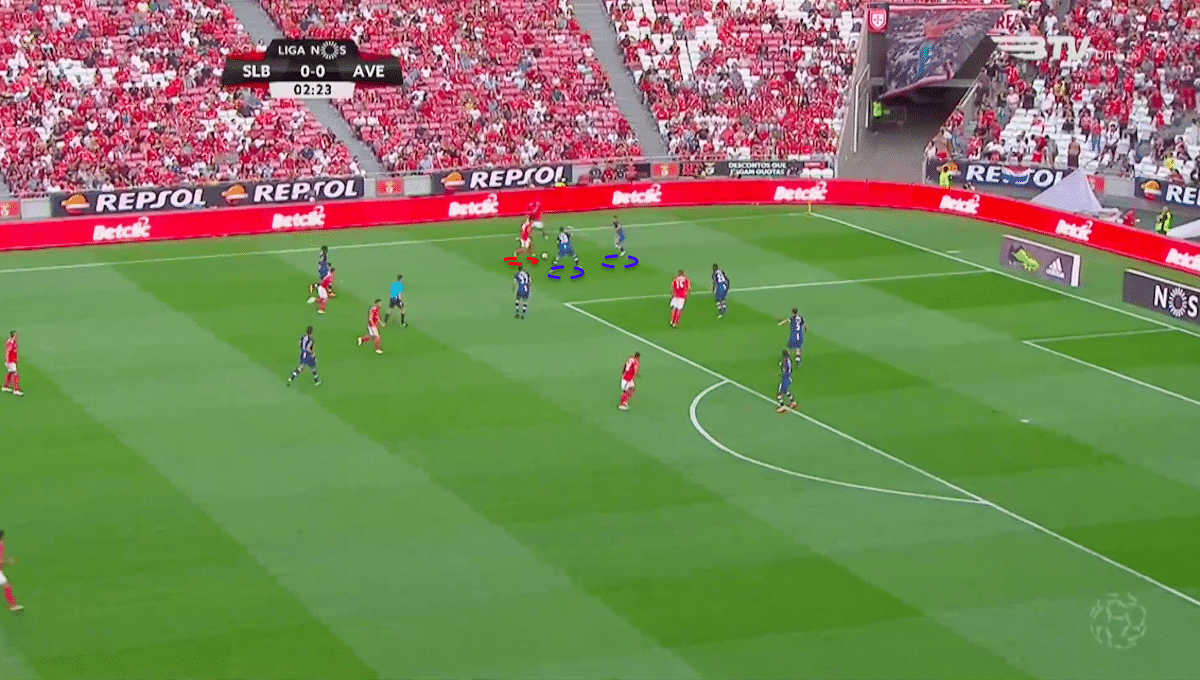 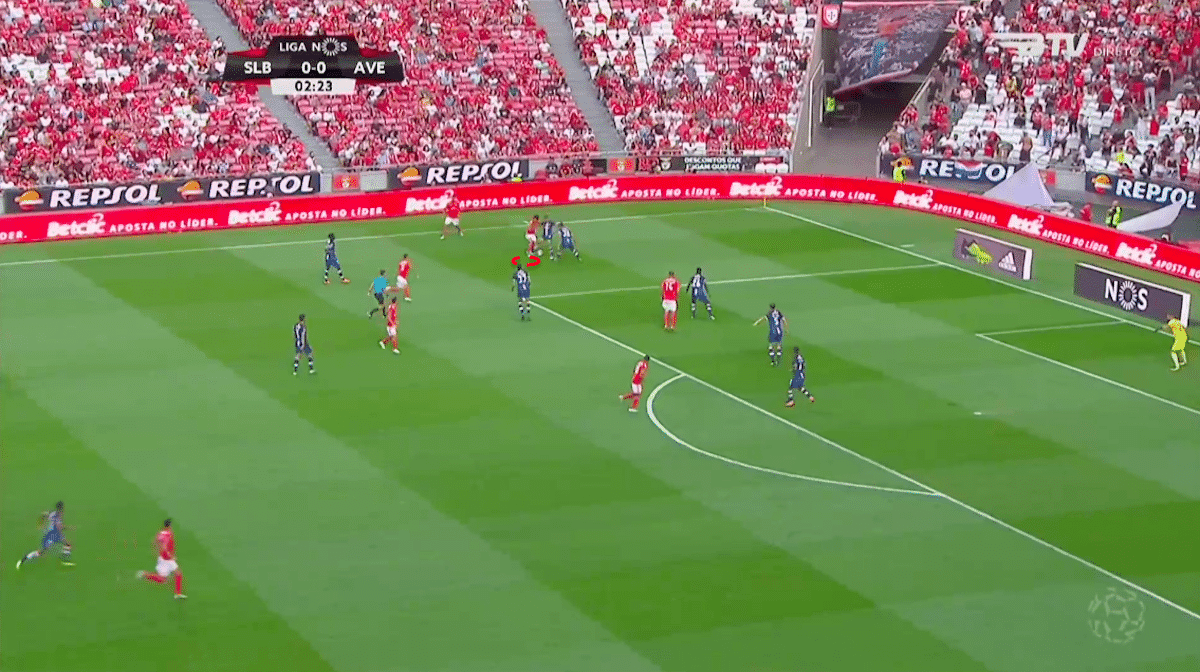 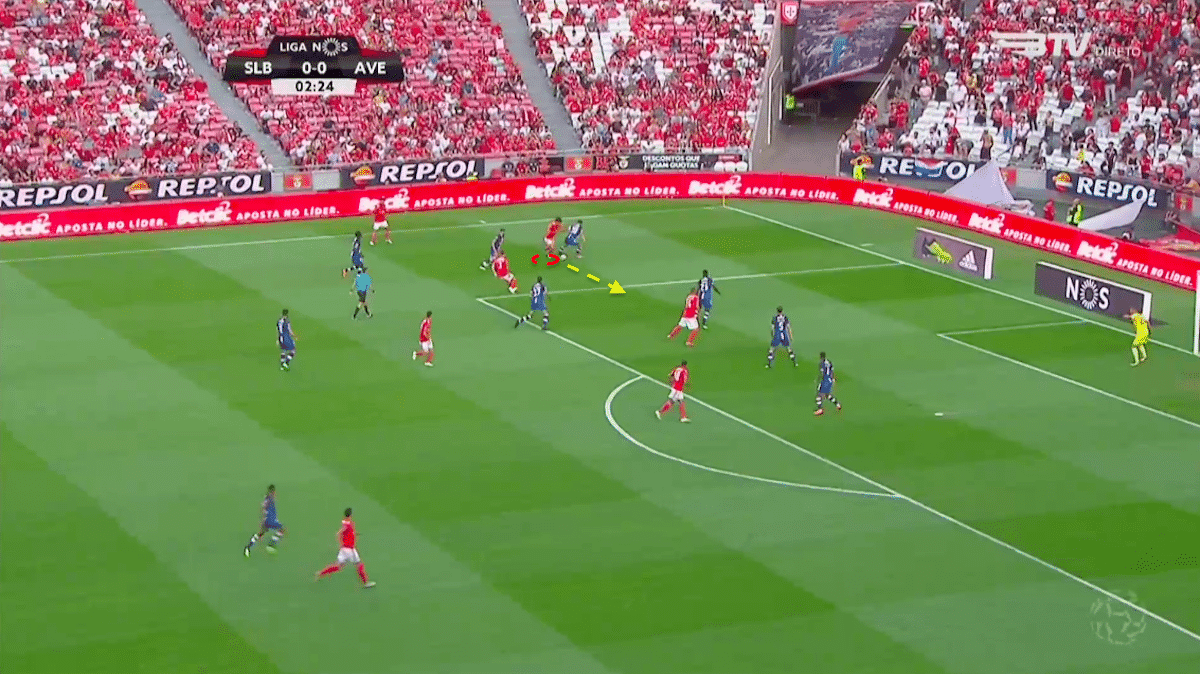 In his early games for Benfica's first team, Félix was used out on the left flank. His natural position is as a No.10 but even then he drifts out towards the touchline so that when he receives possession he can cut in on to his right foot.

Yet his good work isn't just done on the ball. Out of possession he is always moving and searching for space. While if he is further up the pitch, the 18-year-old will look to break behind defences.

He isn't blisteringly quick but his movement is smart, often dropping off the shoulder of a centre-back to make an angle for a pass, and then bursting into space.

Several young players break into a first team and look ready for senior football. They have the physique required to go up against even the most powerful of centre-backs.

Félix doesn't. He is lightweight, whispy. And the fact he has braces does give an impression of a boy among men.

Of course, in time, he will develop further, so it isn't a weakness per se. And his natural ability means defenders do find it hard to use their greater baulk against him as he can nip past them in an instant.

However, if he was to leave the confines of Benfica for a club in the Premier League, he may find it difficult. It's why staying another season or two with Benfica would be beneficial. 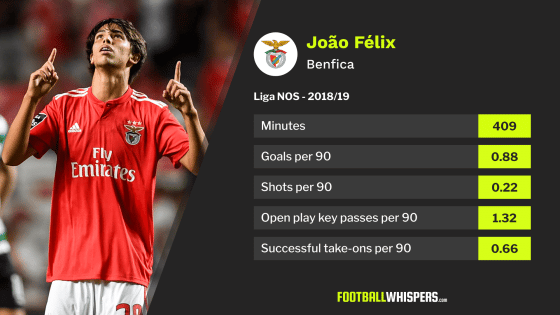 It's clear Félix is a special talent and it's little wonder the interest in him has grown quickly.

However, Benfica have an impressive clutch of young and exciting players in their first-team squad and the club are making an effort to keep that group together for the foreseeable future.

Naturally, a time will come when the youngster will want to depart for a bigger club but that isn't just yet and reports suggest he is going to sign that new deal with Benfica.

It's the smart move. While Félix has talent in abundance he needs regular, top-level game time and at several of the sides who are monitoring him – think Chesea, Manchester City and Manchester United – that simply isn't going to happen.