Arsène Wenger’s prudence is legendary. During his long reign as Arsenal manager, the Frenchman has shown an abnormally laissez-faire approach to the transfer market.

Signing only when absolutely convinced, he has often left it too late to bring in the necessary reinforcements. He has also focused almost entirely on young players.

On countless occasions, Wenger has used the summer transfer window as an opportunity to bolster the club’s youth ranks rather than strengthen his first team.

The Norwegian midfielder is 19 years old and has only been playing regular, top-level football for the past three seasons.

He has spent his career operating in his home country and Belgium with Vålerenga and Genk respectively, meaning he has yet to experience any of Europe’s major fives leagues.

However, despite his lack of maturity and seasoning, Berge is said to be high on Arsenal’s list of transfer targets for the coming months.

We take a look at the youngster and what he could bring to the Gunners squad.

WHO IS SANDER BERGE? 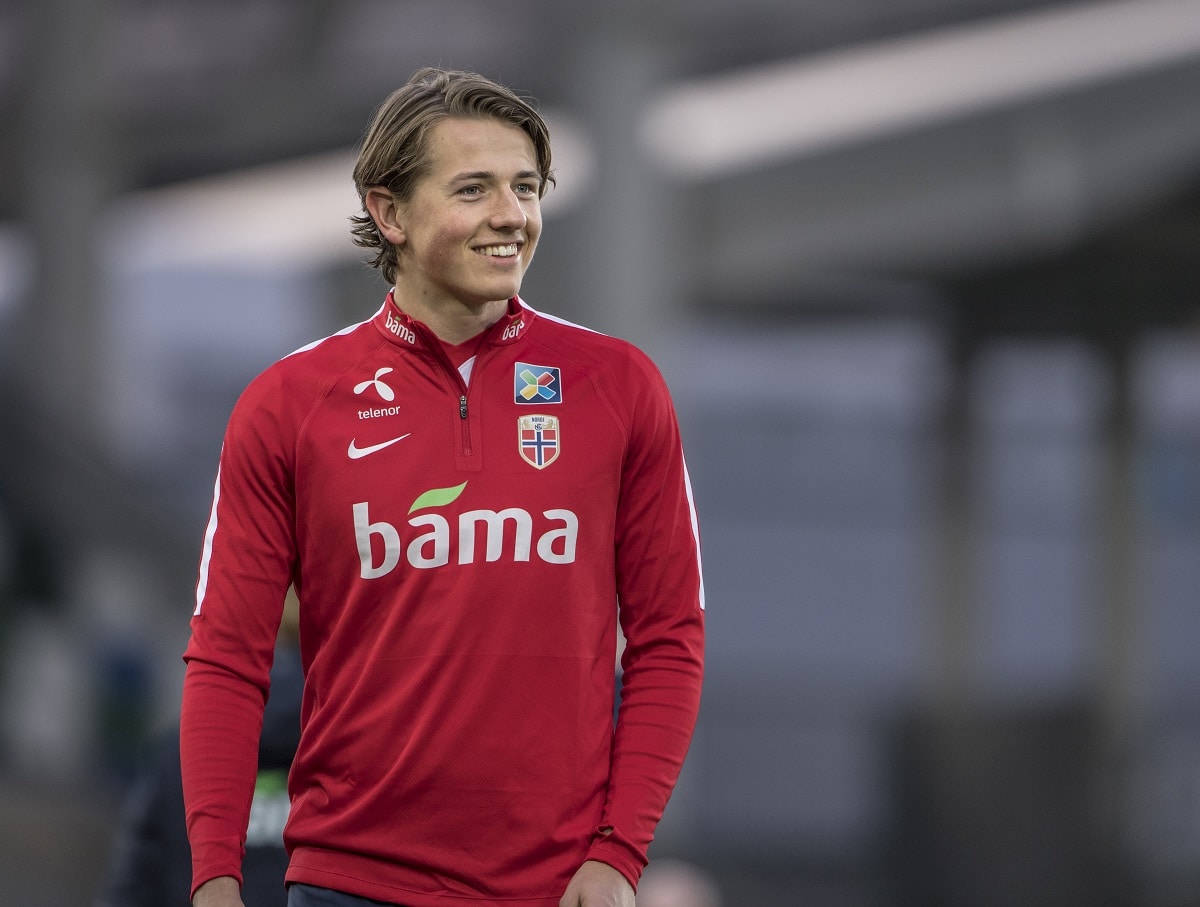 Born in Bærum, Norway on 14 February 1998, Berge came through the youth system of Asker before joining Vålerenga in 2015.

There he broke through into the first team and played regularly in his country’s top tier, attracting interest from clubs abroad.

In January, Genk paid around £1.7million to secure the player’s signature, with the youngster being added to a long list of exceptional prospects that have represented the club.

Berge has had no problem adjusting to football in a new country, transposing his gifts onto a new league, alongside new team-mates.

Primarily a deep-lying midfielder, the 19-year-old is physically not the most dominating of players. However, standing at 6ft 5ins, he is taller than most central defenders.

The youngster doesn’t rely on his height, though, and instead bases his game around intelligence and technique.

In possession, Berge is a subtle but penetrative influence from the base of midfield. He likes to drop deep between the centre-backs to act as a first receiver before turning and looking to play vertical passes through the opposition’s defensive block.

He is comfortable receiving the ball with his back to goal and doesn’t falter easily under pressure, showcasing composure beyond his years along with graceful ball control and an ability to resist pressure using his awareness of space and positioning.

Berge won’t stay deep at all times, however. He does enjoy venturing further forward when appropriate, settling in a higher space to support his team’s possession game as it progresses up the pitch.

He will hold back slightly, as opposed to making forward forays beyond the opposition’s defensive line.

Taking up more of a back-seat, quarter-back role, he will look to take the ball and scan the opposition’s structure in search of holes for through balls to be played.

Defensively, Berge again makes use of brain rather than brawn to win out. He doesn’t dive into tackles, remaining calm even in dangerous one-on-one situations in which he finds himself up against an attacker without nearby support from defensive team-mates.

An astute timer of tackles, he reads the game well and knows when to make his move to dispossess an opponent.

In these situations, he is unafraid to put his foot in or attempt a slide tackle, while he also makes good use of his body to shuffle opponents off the ball. In addition, he takes up good positions to make interceptions and cut-out attacks.

WOULD BERGE FIT IN AT ARSENAL?

Last season, Berge helped Genk into the quarter-finals of the Europa League, where they eventually lost to Celta Vigo.

The player’s head coach, Albert Stuivenberg, said: “At 18 he is already very mature. He is intelligent, reads the game well and takes the initiative. He has the potential to become a future leader.”

Leadership on the field is something Arsenal have lacked in recent years, so such effusive praise of the Norwegian’s potential in this area will no doubt interest the Premier League club’s supporters.

Berge is versatile, as suggested by his statistics per game shown in the below graphic.

He averaged 2.3 tackles and 2.2 interceptions per game in Europa League action while also completing 40 passes at a success rate of 82.1 per cent. On top of that, with the ball at feet, he averaged 0.5 key passes and an impressive 2.2 dribbles.

The youngster’s ability to win possession would be welcomed in an Arsenal midfield lacking players able to combine bite with intelligence.

At the same time, his quality on the ball and ability to retain possession, even when under intense scrutiny, is something that could help Wenger’s side. 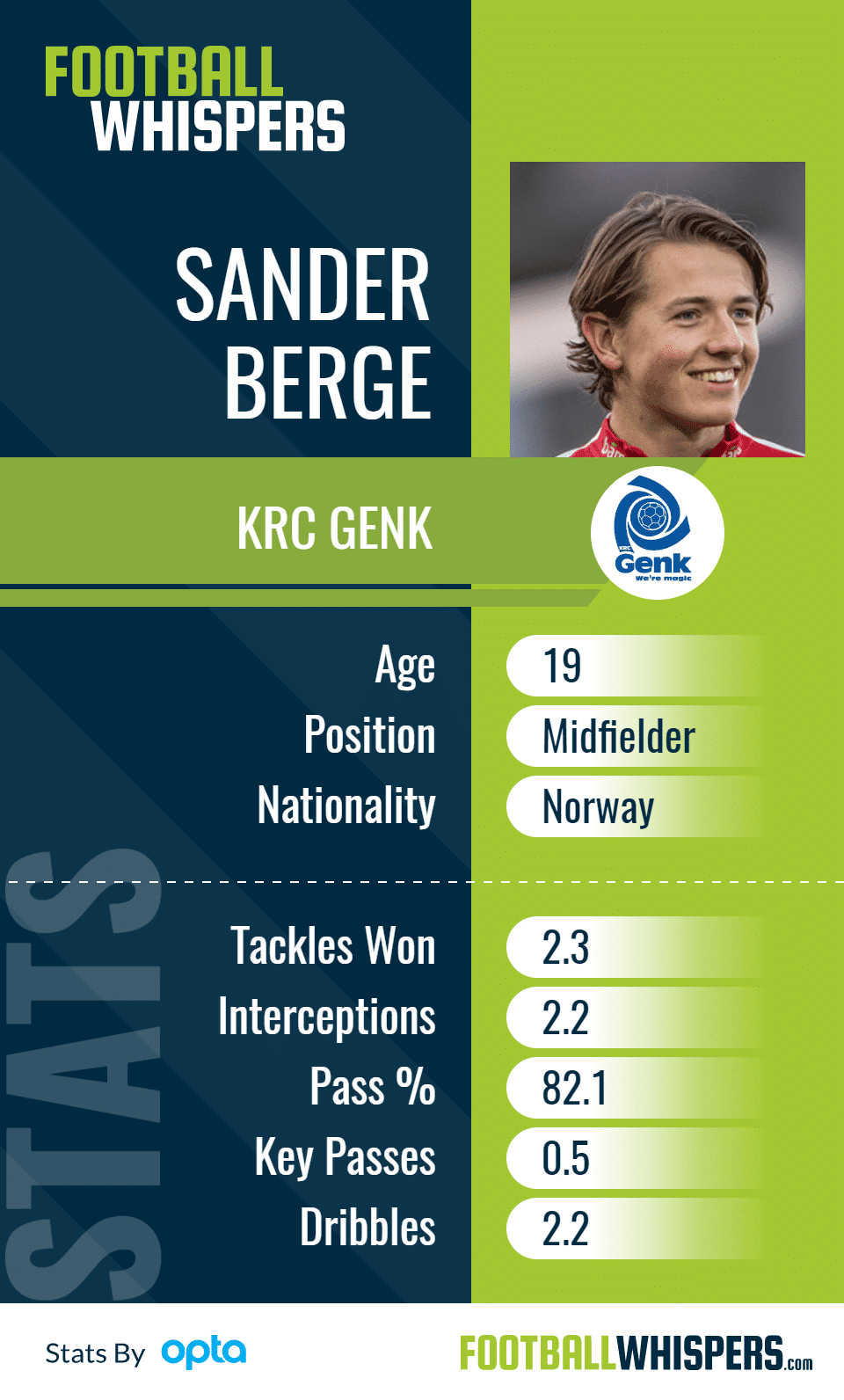 He wrote: “Despite playing with three central midfielders, without any positional directive, only one of them typically drops back to receive a pass from the centre-backs.

Berge has shown a willingness and capability when dropping deep to receive the ball from his deeper team-mates, as well as a good understanding of his position within the team. Both traits would theoretically aid Arsenal in solving their build-up issues.

Norwegian journalist Jonas Giæver tweeted about the potential transfer: “I think Sander Berge has a huge future ahead of him but I do wonder if a move to the Premier League is a bit premature.

“Physically he is huge and his footballing IQ is miles ahead of his age. He picks the right pass, is a great stabilizer and dictates the midfield.

“He only just came to Belgium and even though he has impressed, I think he'd need a full season there for experience. [He has] huge potential, though.”

This will be important to consider if Arsenal do sign Berge, who is also an Everton transfer target.

While he has talent and promise in abundance, he may not be ready just yet to shoulder the responsibility of dictating the tempo for a top Premier League club.