There is a scene in The Dark Knight where a group of Batman wannabes attempt to apprehend The Scarecrow. Unsurprisingly, it doesn't work out and the real Batman comes to the rescue.

As the caped crusader walks away, one of the men asks: “What gives you the right? What's the difference between you and me?!” To which Batman responds: “I'm not wearing hockey pads.”

You imagine this is a scene Lionel Messi can relate to. The Argentine is a genius. A player who produces the incredible on almost a weekly basis. And yet every country has their own Messi.

Sardar Azmoun was the Iranian Messi. Ryan Gauld the Scottish Messi. Walid Soliman the Egyptian Messi. And so on.

Ultimately, much like in The Dark Knight, none of these could match up to the Argentine hero. So what should be made of Abdülkadir Ömür, the Turkish Messi?

The 19-year-old has come to the attention of a wider audience after reports emerged he was a Liverpool transfer target. The Reds quickly played down their interest in the Trabzonspor midfielder, who has also been linked with Manchester City, Arsenal and Tottenham Hotspur.

“Liverpool is a very important club, but the most important thing is Trabzonspor’s interests,” the teenager told CNN Turk this week. “If my club tell me that I can go, I’ll go. If they tell me to stay, I’ll stay. So we will see.

“My priority is Trabzonspor but I have a dream of playing in Europe. I hope I play there one day. My dream is to succeed here and then go to Europe.”

The Turkish club's president, Ahmet Agaoglu, has confirmed there are several sides interested in Ömür. And he added the youngster would not be sold to a “lesser club” even if they were able to pay the reported £27million fee.

It would be a sizable outlay for a player who has only 18 months of regular first-team football under his belt and is yet to represent his country at senior level.

However, Ömür's potential is undeniable. One day he will make it to one of European football's biggest sides.

Who is Abdülkadir Ömür?

It wasn't that long ago that Turkish football was viewed, with some justification, as a refuge for ageing stars. But over the last year, there has been a dramatic change.

The likes of Fenerbahçe, Beşiktaş and Galatasaray didn't spend big last summer. And for three very good reasons, as explained by Emre Sarigul in The Guardian.

“A combination of the weakening Turkish Lira, Financial Fair Play regulations and new policies introduced by the Turkish Football Federation to hold free-spending club presidents accountable for the clubs’ debt has had a dramatic effect.”

It has resulted in the big sides focusing more on youth development, either by bringing players through their own academy system or signing burgeoning Turkish prospects from small clubs.

Trabzonspor, however, were ahead of the curve. Which is why Ömür was able to thrive last season.

He made his debut for the club as a 16-year-old in the Turkish Cup in January 2016. A further six appearances, all bar one of which came from the bench, would follow over the next 18 months.

Ahead of the 2017/18 season, though, Ömür was promoted to the first-team squad. And a 45-minute substitute appearance against Genclerbirligi made the difference.

The then 18-year-old hadn't featured in the first two Süper Lig games of the season and was afforded just two minutes in the third. But his impact against Genclerbirligi, in which he assisted the equaliser in a 3-1 win, was a turning point.

From then on he was in the side and was utilised across the three behind the striker, but usually from the right, in a 4-2-3-1 shape. Ömür made 32 appearances in all competitions, scoring three goals and creating a further six.

This term he has kicked on. After 17 appearances he has netted twice and registered four assists. There is a greater maturity to his game, too. Hence the increased interest from sides across Europe.

Inevitably for a player who has been compared to Messi, it's no surprise that Ömür is left-footed, is an excellent dribbler, and possesses explosive acceleration.

It is what allows him to ease past opposition defenders when he cuts inside from the right flank, and then what enables him to slalom past challenges from cumbersome central defenders.

This ability to evade challenges allows Ömür to break defensive lines and create space to either fashion a chance for a team-mate or have a shot on goal.

The below stills are taken from Trabzonspor's 4-0 win against Kayserispor last season.

The Turkey Under-21 international collects possession in midfield and looks to move forward. But he comes under immediate pressure. 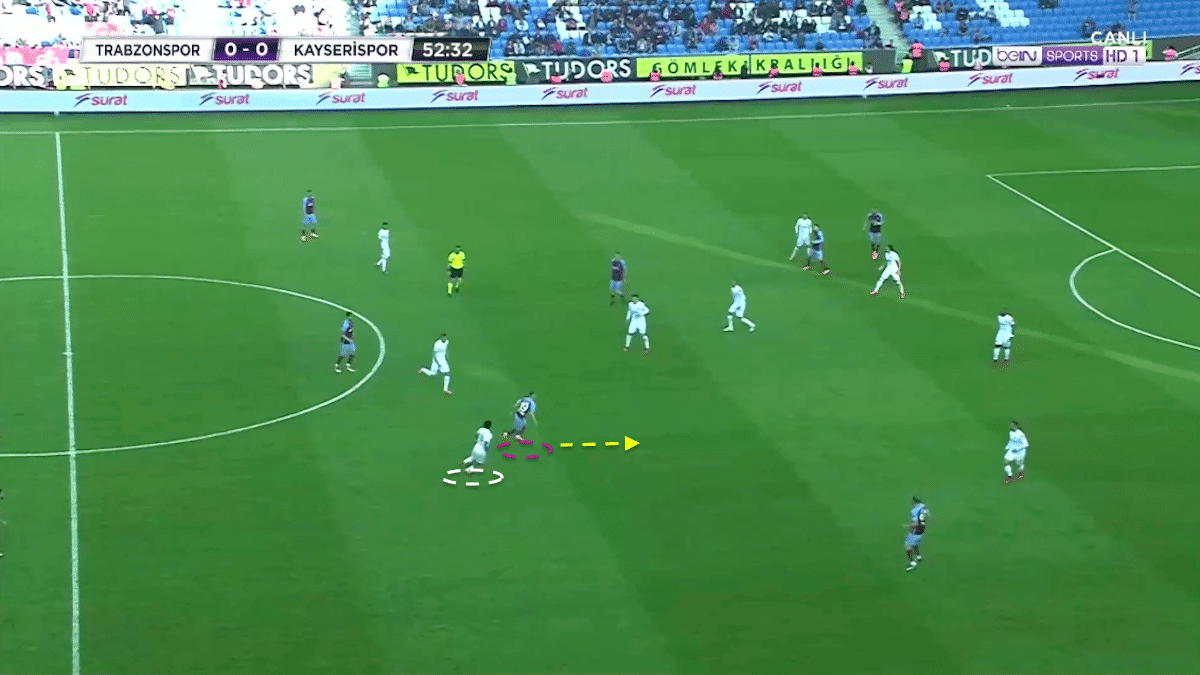 However, despite his slighter frame, he holds off the challenge and knocks the ball past the covering full-back in one motion. From then on he is free to attack the penalty box. 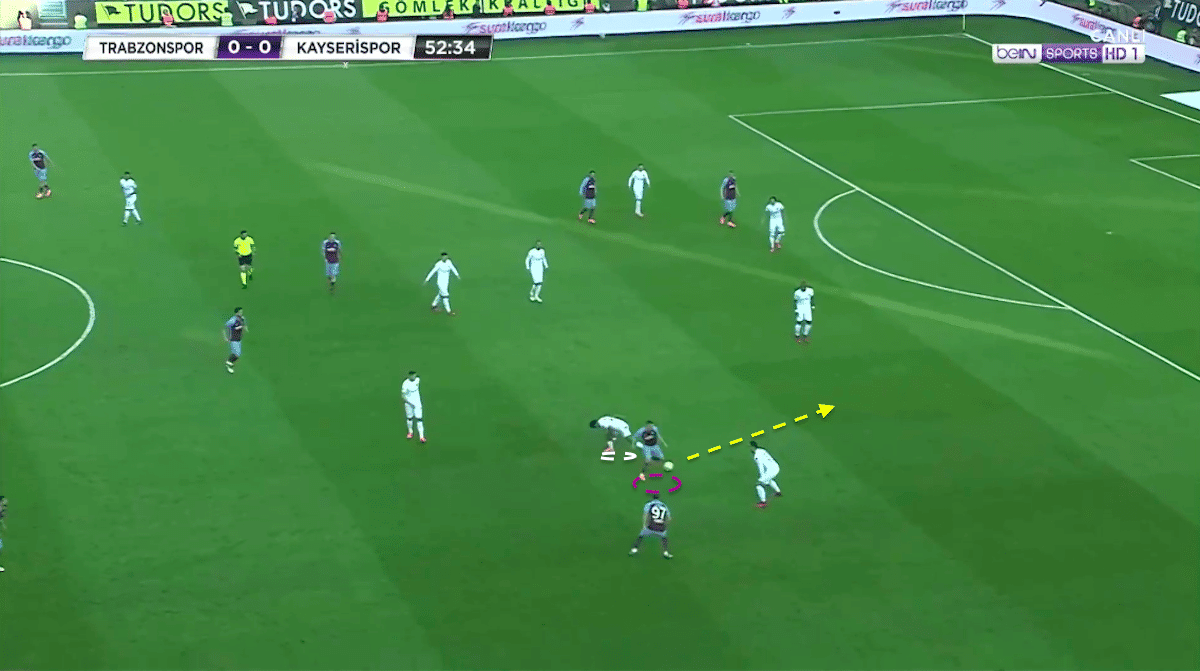 With the ball never out of his control, Ömür scuttles forward in a fashion reminiscent of Liverpool star Xherdan Shaqiri.

He shifts the ball onto his stronger left foot and whips his shot into the far corner. It is a sumptuous goal. 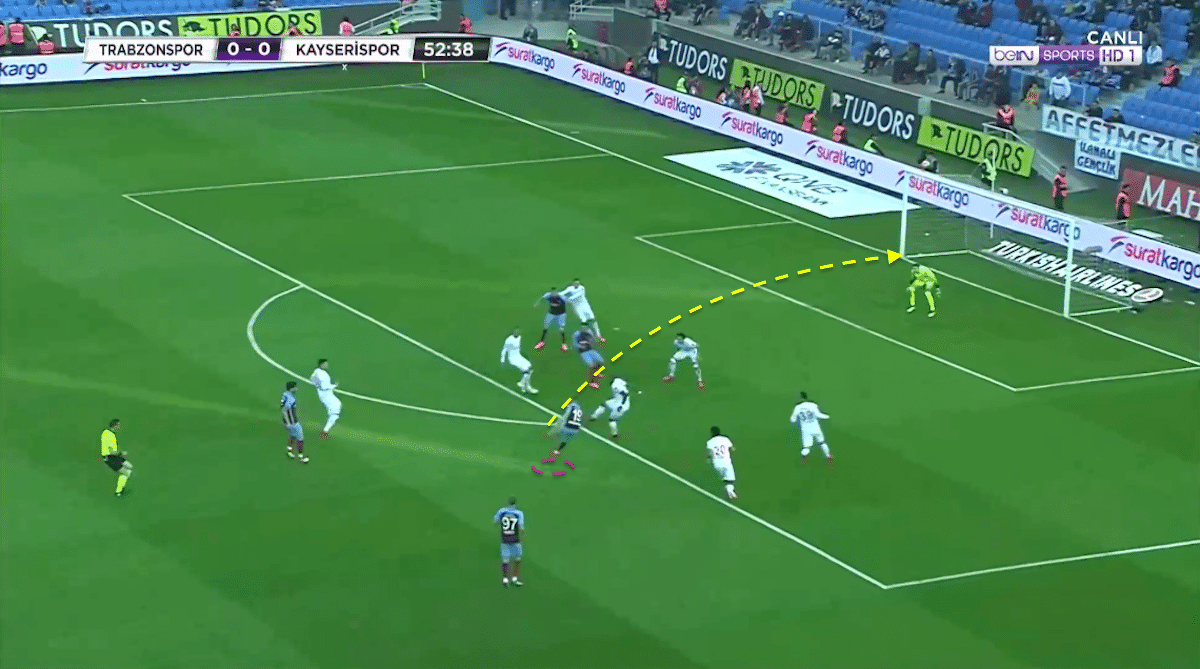 Yet there is more to Ömür's game than high-octane dribbling. He also has finesse and nuance, which is why he is suited to playing as a No.10, to his passing.

That was demonstrated against Fenerbahçe in January. Ömür, at the time only 18 years old, drifts off the right flank and receives possession. Immediately he is closed down. 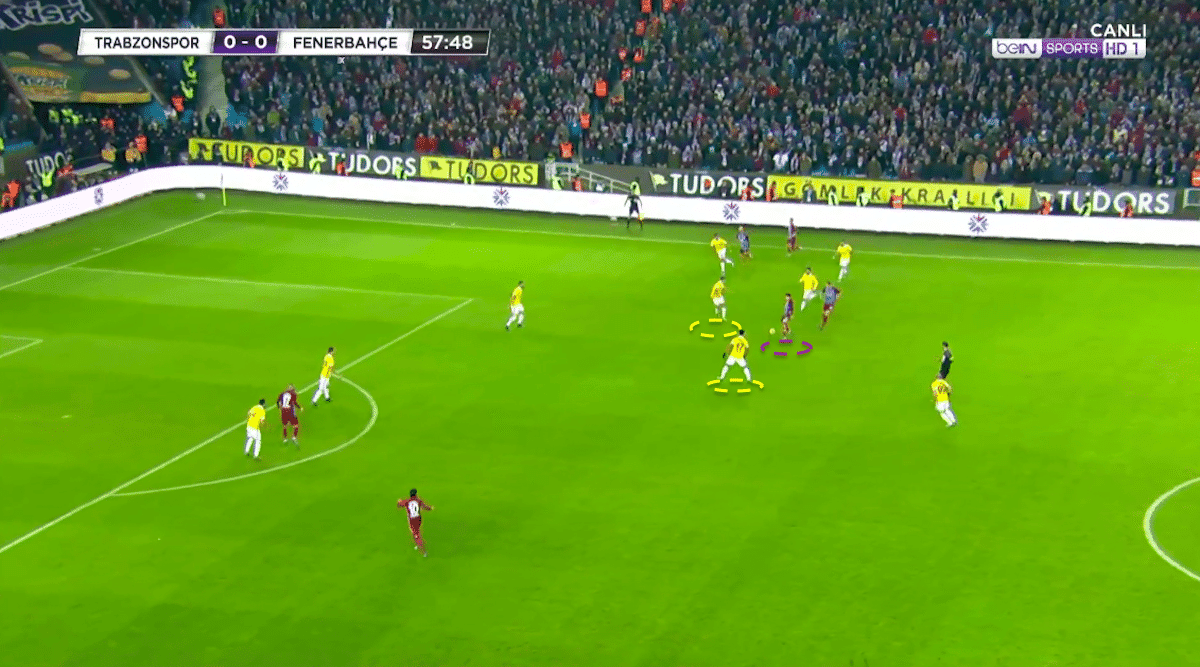 Yet as he brings the ball under control, the teenager looks up and spots Burak Yilmaz between the visiting centre-backs and signalling for a pass. 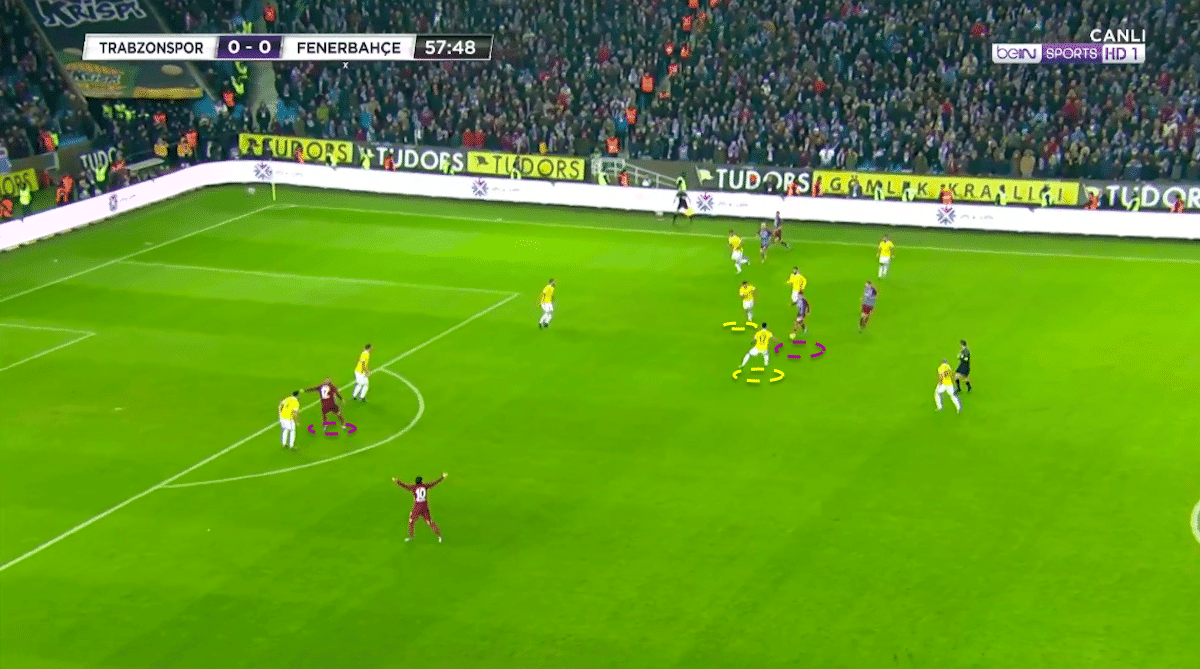 The pass is not an easy one to make, especially under pressure, but Ömür weights it perfectly. 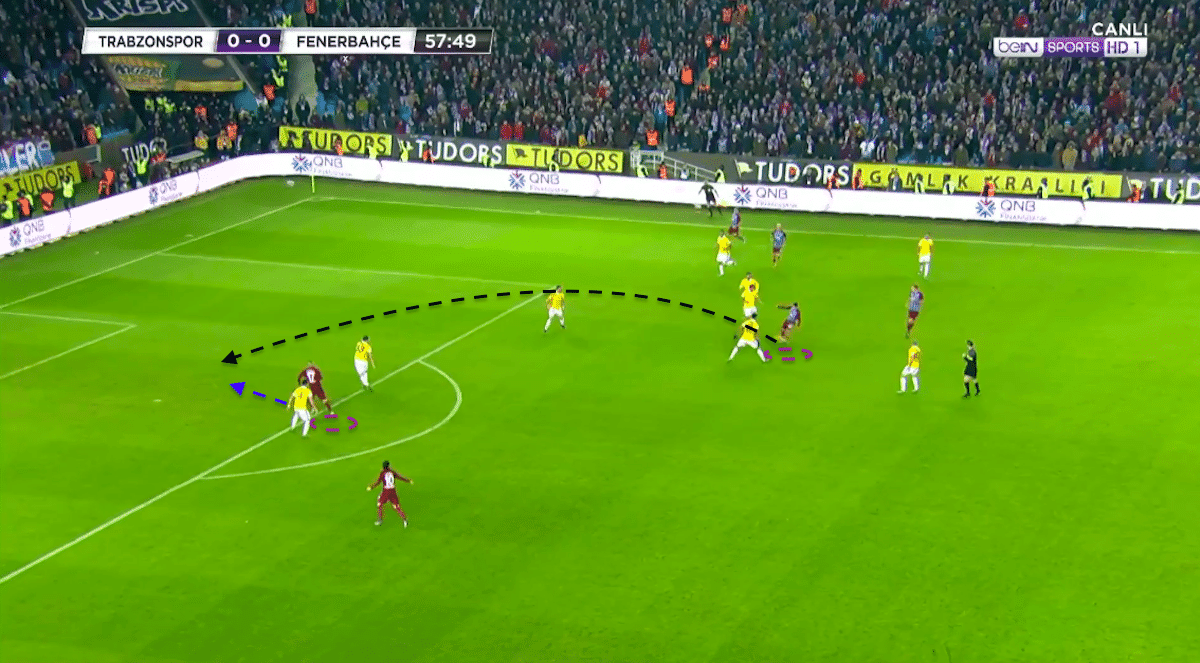 He puts enough on the ball to evade the defenders and find the head of Yilmaz, whose headed finish is an easy one thanks to Volkan Demirel's decision to come off his line.

Ömür has a strong skillset but, like any young player, it needs honing. And that will be achieved by playing games.

Only with that, will find greater consistency. The teenager has become a bigger goal threat this term – he averages 1.31 scoring attempts per 90 compared to 1.16 last season – but his open play key passes have dropped from 1.06 per 90 to 0.80.

His defensive output will need to improve, he averages 1.53 tackles and 0.43 interceptions per 90, if he is to move on to a European superpower given the majority now press opponents high up the field. But that will come with time.

The key is bringing all his undoubted talents together and producing on a weekly basis. Once he can do that then a big transfer is inevitable.

Given Trabzonspor's valuation and Agaoglu's assertion that Ömür won't depart unless it is for a side competing in the latter stages of the Champions League, it is unlikely the teenager will be leaving Turkish football in January.

But if he continues to impress a summer move is on the cards. The biggest clubs in Europe are in a constant battle for the best young talent on the Continent, and Ömür is certainly that.

Liverpool's interest could firm up – the club wanted another midfielder last summer and almost had one in Nabil Fekir – with time while Manchester City may want a replacement for Brahim Diaz, who moved to Real Madrid.

Tottenham and Leicester City have also been linked with Ömür in the past, and a switch to either would more likely yield more regular game time than a move to Anfield or the Etihad.

Then there's Arsenal, and Mesut Özil is a known admirer. He said last year: “Trabzonspor have two young players, Yusuf Yazici and Abdülkadir Ömür, who are incredible talents.”

The Gunners' squad is likely to be shaken up in the summer with Unai Emery putting a firmer stamp on the side. Arsenal have been credited with an interest in another young Turkish star, Cengiz Ünder, a left-footed winger who cuts in from the right flank.

Roma are set to demand around £45million for the 21-year-old, though. Two years his junior, Ömür could prove a smarter acquisition.