Football can be a cruel game for teams in the middle pack. The shelf life of managers and the players at these clubs always tend to be short. Players are dropped and managers are sacked if a team underperforms while bigger clubs poach the same individuals if they overperform.

They are, at times, victims of their own success. It's happened in the Premier League with clubs like Aston Villa in the past – Stewart Downing, James Milner and Ashley Young all left the club after impressing – and more recently with Southampton. It happens abroad, too, with Ajax regularly losing players after clubs put more lucrative offers on the table.

The same thing is about to happen to Hoffenheim. Julian Nagelsmann guided them to a fourth place finish last season, just five points shy of second placed RB Leipzig, and got them into the Champions League play-off round. They lost to five time champions of Europe Liverpool and dropped into the Europa League.

Quite an achievement for a side tipped to be in a relegation battle.

If reports are true the Bavarian giants could return in January to sign striker Sandro Wagner. The manager himself is set to be at the centre of a tug-of-war between the Bundesliga champions and Borussia Dortmund.

Kerem Demirbay was linked with a summer move to Liverpool with Jürgen Klopp reportedly interested in adding the German international to his midfield options. But it's Nadiem Amiri, his midfield partner, who has a host of clubs lining up to sign him if recent reports are true.

Tottenham Hotspur, Arsenal and Manchester United are all keen on bringing the 21-year-old to the Premier League and aren't put off by the £20million price tag that Hoffenheim have slapped on his head.

With the German club in the hunt for a top four finish again this year it's unlikely they'll part with him during the winter window but a summer move is very much on the cards. Amiri's current deal expires in 2020 and if Hoffenheim miss out on a European place this season he may agitate for a move.

His journey so far isn’t as straightforward as his extraordinary talent might suggest it should have been. Born in Ludwigshafen, Germany, it wasn’t always obvious that the man with Afghan heritage would become a professional footballer, for as a boy, he actually preferred Karate.

“I was six years old, and my brother already played at Ludwigshafener SC,” he told Radio Regenbogen.

“I did not want to start with football, because I was actually rather the karate type. But then the coach of my brother told my mother that she should bring me to training sometimes. So I still kept doing karate training and then started with football.”

Before joining Hoffenheim, on top of playing for Ludwigshafener SC and Waldhof Mannheim, he also sandwiched his time with those two outfits with a stint with the well-renowned 1. FC Kaiserslautern but the club didn't see enough to keep him on.

“I was dropped from Kaiserslautern. The manager didn’t want me in his plans. It was hard for me. All together I played for Kaiserslautern for five years. That said, now its motivation for me to show them what I can do,” insisted Amiri.

Joining Hoffenheim as a 15-year-old in 2012, Amiri’s immense desire and ambition to make it to the Die Kraichgauer first team gave him the perfect platform he needed to turn his dreams into reality.

Upon reaching the club’s Youth A side, it was there that the sensation really began to rise to prominence. Under young managerial sensation Julian Nagelsmann, who’s now doing an exceptional job managing the senior team, it didn’t take long for Amiri to demonstrate his exceptional ability.

Despite having to bide his time in the beginning with Nagelsmann’s Under-19s, Amiri’s persistence and hard work eventually paid off, as he quickly becoming an indispensable member of the side.

“With the Under-19s I sat on the bench for most of the first half of the season. We had a very strong team and the results were always good,” he mused while speaking to the DFB website.

“He [Nagelsmann] told me back then that I needed to be patient and that my time would come. He was right. In the second half of the season I was almost always in the team.”

Going from strength to strength working in tandem with the managerial hotshot, the tricky attacker continue to improve steadily and was an integral component of the team that won the national Under-19 title in 2013/2014 and finished runner-up the following season.

Markus Gisdol handed him his debut against Wolfsburg on February 7 2015. He was deployed in an attacking midfield role and continued to play there until Nagelsmann was promoted to first-team manager.

His former youth manager played a 3-5-2 system and used Amiri as a box-to-box centre-midfielder. Similar to what Pep Guardiola has done with David Silva and Kevin De Bruyne. Nagelsmann wanted to make the most of Amiri's ability to play in tight spaces and wanted him to have more of an influence on the team.

This is where he flourished and it's his form in this role that has caught the eye of some of Europe's elite.

He's your modern day attacking-midfielder turned centre-midfielder. He's press resistant and can work in tight spaces, often manipulating the ball in ways you didn't think were possible all while slaloming his way past opponenets. He's got great vision and can execute the more difficult passes.

With him in your team there's always a chance that you'll be able to find your way past even the biggest of parked buses. In the below pictures you see just how creative he is. 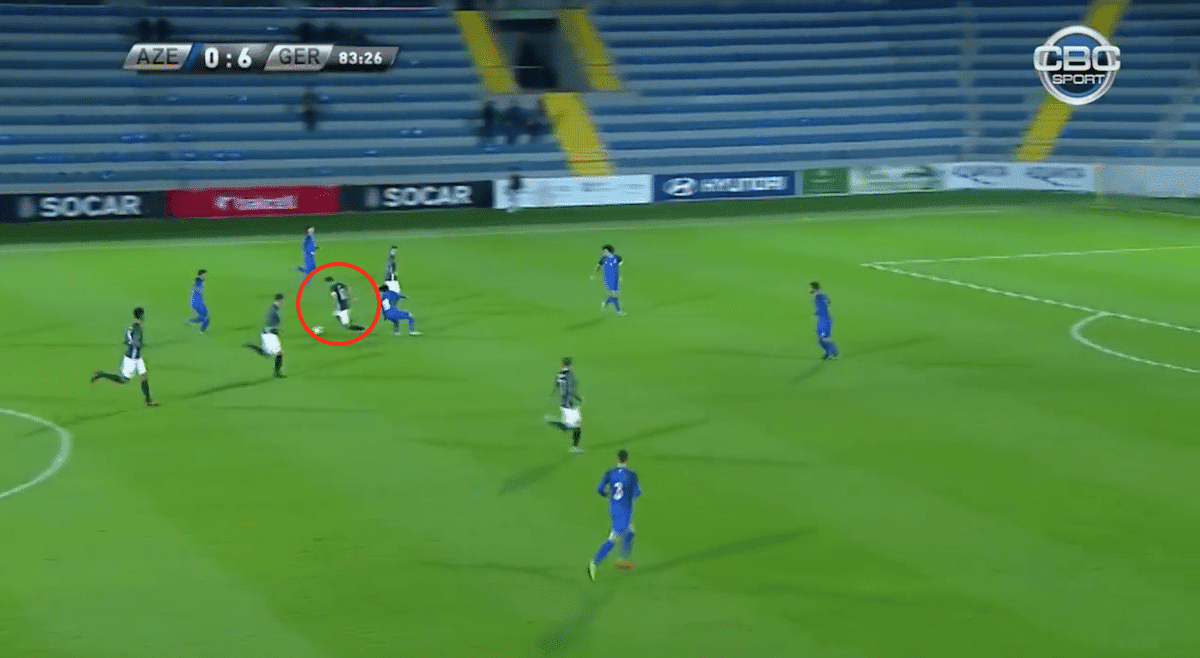 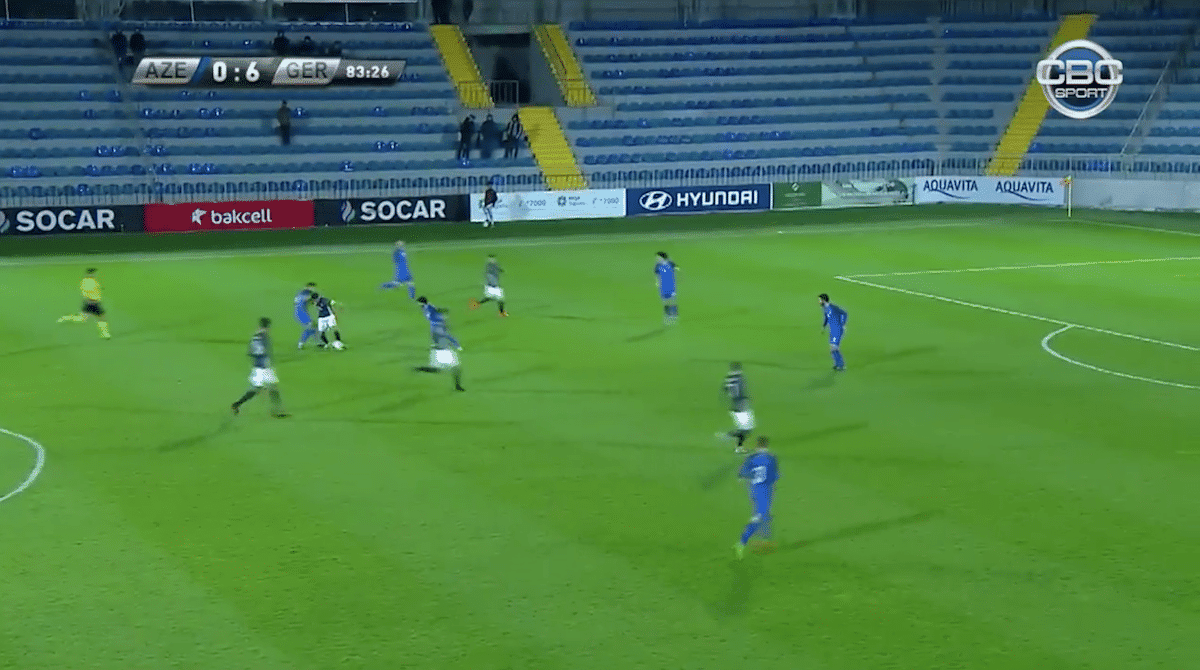 He picks the ball up in the middle third and drives at the opposition. Amiri, circled in red, then turns back on himself and shows great close control to wriggle his way past the second player, keeping the ball under his spell at all times.

The opposition may not be the best but what he's done shows great creativity and intelligence. He slows the play down and creates space for himself. 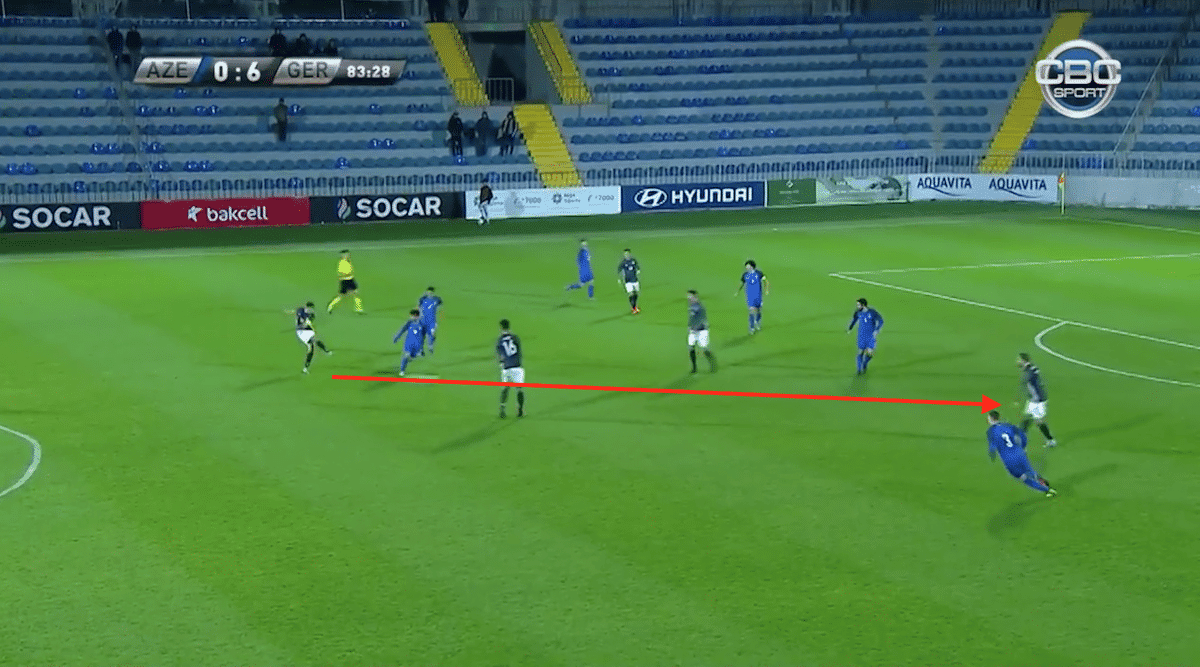 He then plays a pass that nobody is expecting. Straight through the heart of the Azerbijani defence and into the path of his teammate who has positioning himself between centre-back and full-back. You can tell by the way his teammate is standing that even he doesn't expect that pass to be played. He's on his heels and he's facing his own goal as opposed to being on the half-turn ready to receive the ball.

With one moment of brilliance he takes the six players behind the ball out of the game and gets his teammate in on goal.

However, he's not just about those incisive passes. He sees the bigger picture and weighs up the best chance for his team to progress and sustain an attack. 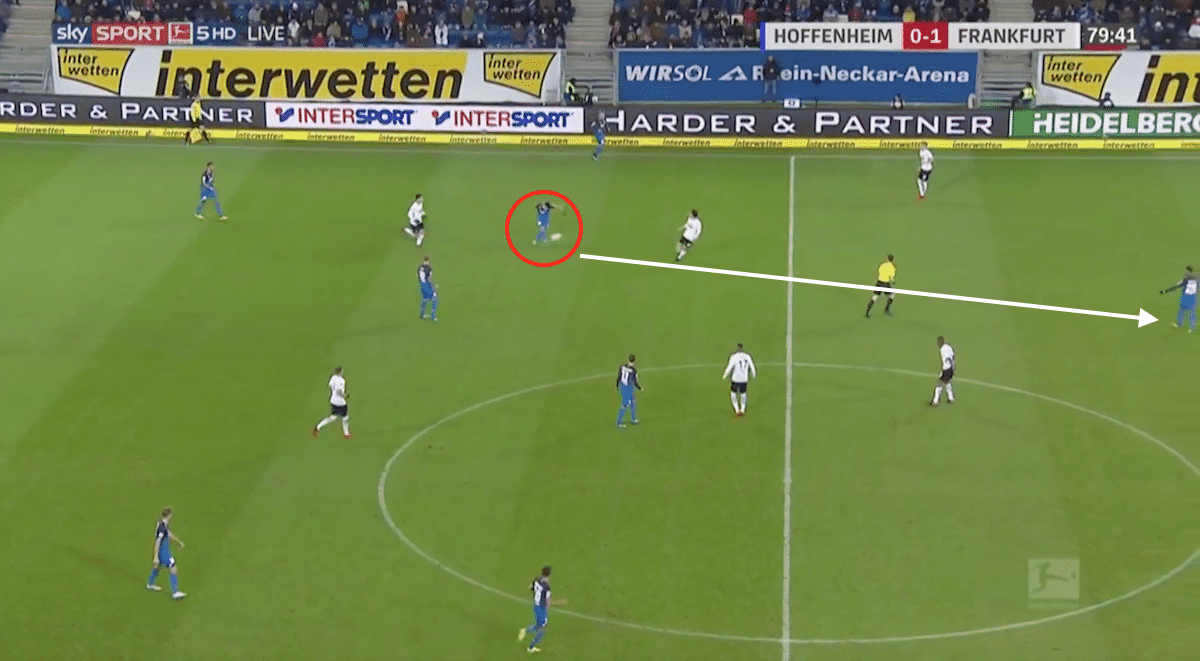 In the picture above you see Amiri, circled in red, lining up a switch of play. Yet there's an obvious pass on, shown by the white arrow, that many others would make. It would be considered to be incisive because it's played down the centre of the pitch and takes a number of Frankfurt players out of the game.

But it's not the best option as you can see in the next picture. 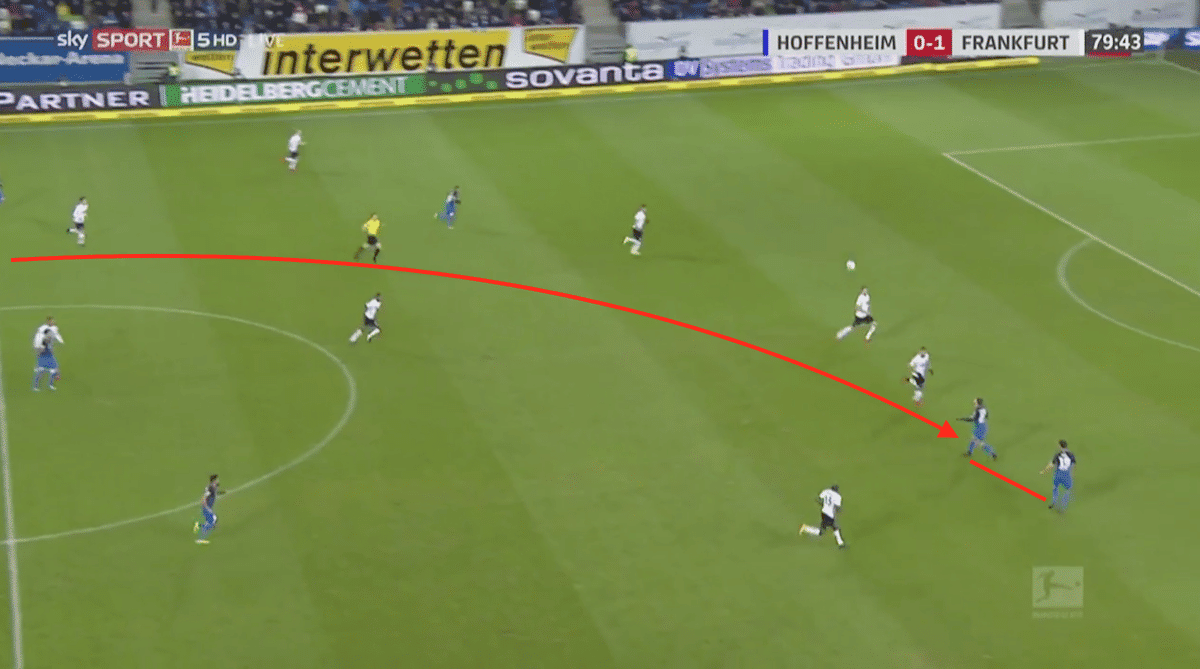 The man he would have passed to, just ahead of the referee, is isolated and in the middle of four Frankfurt players. Chances are the away side would have won the ball back and put a stop to that attack. Instead he switches the play to the Hoffenheim right where Nagelsmann's team have two players.

They're outnumbered there three to two but the chances of them retaining the ball are much higher and it stretches the Frankfurt's team which in turn creates more space for the Hoffenheim midfielders to exploit as they join the attack.

Not only does he have an influence on the attack he also chips in defensively. He's averaging one tackle and 1.5 interceptions per 90 minutes. For context, he's not that far away from N'Golo Kanté (1.9) and Nemanja Matić (1.7) when it comes to interceptions.

Would Amiri suit the Premier League?

The likes of De Bruyne, Silva, Santi Cazorla, Philippe Coutinho and Adam Lallana have all flourished as centre-midfielders despite originally being attacking players. They aren't the biggest of players but they make up for their lack of physicality with their fast feet and even quicker footballing brain.

There's no reason Amiri couldn't do the same and be the creative midfielder in the middle third all top teams need in the modern game. At just 21 there's plenty of room for him to develop into one of the best at what he does.