It was a sunny June evening in 1998. The Stade de France was awash with blue and yellow as John Collins stared down Claudio Taffarel. Collins lingered, hands on hips, as he sized up his opponent before coolly dispatching a penalty into the bottom left. Scotland one, Brazil one. The Tartan celebrated what must have felt like the beginning of an otherworldly adventure. However, two games later, they said goodbye to the 1998 World Cup having been brushed aside by Morocco. And, almost 18 years on, they have not returned to major international competition.

Some will see Scotland’s absence as football’s loss, and they would be right. The passion, noise and kilts are missed. But the feeling is mutual. The last few years have been painful for Scottish fans too. False dawns are now common occurrences; each qualification campaign bringing with it new hope that – either quickly or laboriously – is extinguished. It never ends well but, so established is this narrative, the failure is now generally met with a shrug of the shoulders and an ‘ah well.’ The Scottish national team has become a caricature of glorious defeat as memories of happy football-themed summers in foreign lands become ever more distant.

This year Paris will once again play host to international tournament football but Scotland won’t be there this time; the reason being a particularly sadistic descent from Euro 2016 hopefuls to absentees.

Despite being drawn in a tough group that also contained Germany, Poland and the Republic of Ireland, there was belief that Scotland could finally break the qualification curse. The top two would go through automatically, third-place would yield a play-off. After a strong start, Gordon Strachan’s side looked well positioned. They lost just one of their opening six and sat three points behind first-placed Poland with four games left. Then they lost to Georgia. A more understandable defeat to Germany followed, leaving Scotland four points off third place. The dream was conclusively shattered in the penultimate round of fixtures.

The Republic of Ireland were drawing at home to Germany as, just past the hour mark, Scotland went 2-1 up against Poland. If results stayed the same Strachan’s men were back in business. Then, inexplicably, Germany went behind in Dublin to a Shane Long goal. Scotland’s fate was sealed in the 94th minute after a harmless Polish free-kick bobbled into their penalty area, deflected, bounced off the woodwork and fell to Roberto Lewandowski to tap into an unguarded net.

The absurdity of the exit was almost too much to take. Pure misfortune felt like the only possible explanation at the time, but bad luck is too easy an excuse for something that happens so consistently. Where previous failures were glorious, this was ridiculous. It was wholehearted confirmation that the Scottish national team needed a shake-up.

One of the issues that has blighted Scotland’s hopes in the past few decades has been a lack of forward thinking. A hesitancy to blood younger players born out of a desire to compete and qualify in every single campaign has stunted the national team’s progress. This short-termism has led to an inescapable cycle whereby Scotland are left without players to carry them forward into the future.

Scotland’s squad for their last two Euro 2016 qualifiers, against Poland and Gibraltar, offered a glaring portrait of this issue. Of the 28 players called up over the course of these two fixtures, 11 were in their 30s. Astonishingly, only four were under the age of 25. Furthermore, the current average age of all 27 players that appeared throughout Scotland’s short-lived Euro 2016 campaign was 28. For context the campaign began in September 2014, meaning the average age of this group of players heading into the Euro qualifiers was closer to 27. It’s worth noting that this same group will have an average age of 30 by the time the 2018 World Cup in Russia comes around. 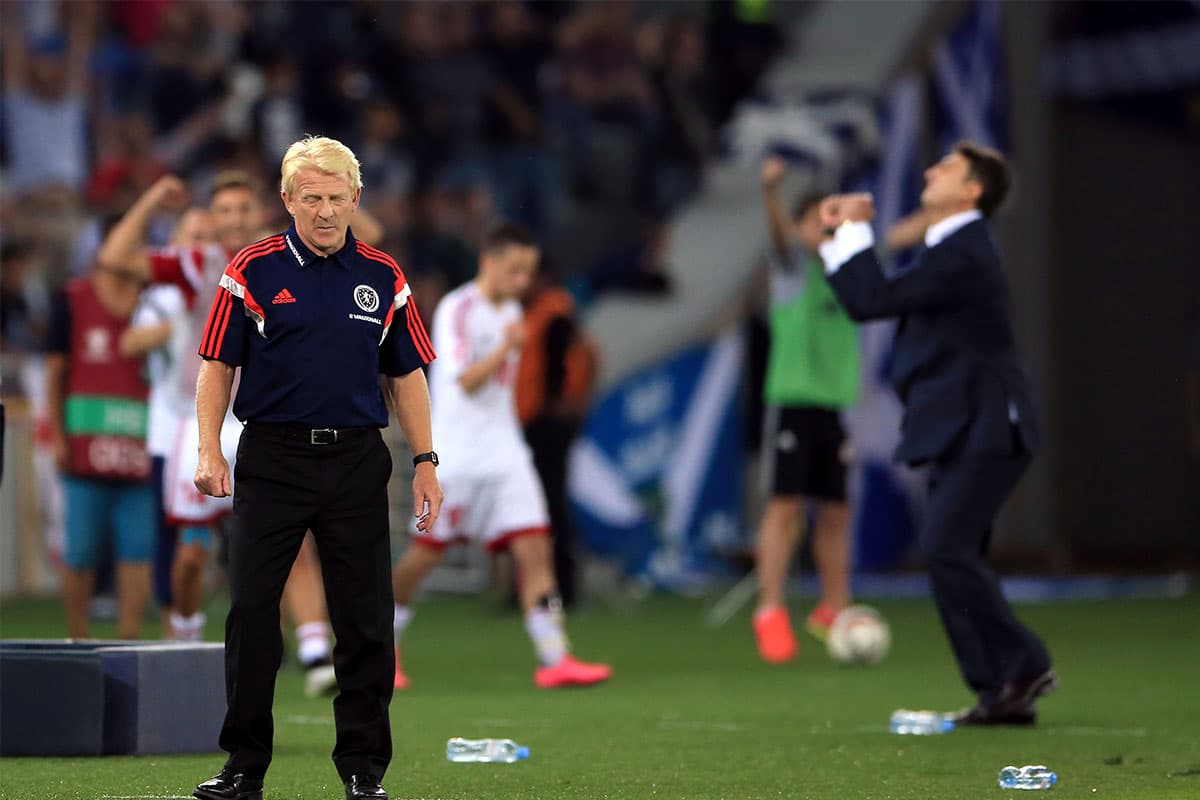 Those numbers tell a story. Scotland are picking players that are either already well into their prime years or past their best. There is little place for youth; teenagers are persona non grata.

Preferring experience over youth isn’t the only selection policy that needs to be queried. Another is Scotland’s constant omission of domestic players outside of the Old Firm. Economic realities dictate that much of Scottish football’s talent is sucked up by the Glaswegian giants or the top two tiers of English football at some stage. This seems to have led to a perception among selectors that players outside of this bubble are unprepared for the rigours international football.

Traditionally there has been some sense to this; not only have Celtic and Rangers been Scotland’s only representatives in the Champions League, they are also the only Scottish sides to have progressed to the latter stages of European club competition over the last few decades. As a consequence, their players have often been more used to competing a high level and thus were more suited to international football. However, this dynamic is outdated. Rangers have spent the last few years working their way back up the Scottish football ladder following severe financial difficulties. While their city rivals have been away, Celtic have progressed beyond the Champions League’s qualifying stages just twice and on one of those occasions they finished rock bottom of their group with five defeats from six games.

Yet – in spite of the decreasing gap between the Old Firm and the rest of Scottish football – of the squad for those final two qualifiers against Poland and Georgia, only six players were based in Scotland and five of them – Craig Gordon, Charlie Mulgrew, Scott Brown, James Forrest and Leigh Griffiths – were Celtic players.

Interestingly, Stuart Armstrong was called into the Scotland squad in 2013 as a Dundee United player but remained uncapped. He continued to thrive in the top tier of Scottish football but was given no further inclusion in the national team setup for several years. That changed in August of last year, when Strachan brought him back into the fold for the qualifiers against Georgia and Germany. Armstrong had signed for Celtic just six months prior to his national team recall.

Armstrong’s case was an example of how the Scottish national team generally refuses to take the lead when calling up young talent, preferring instead to wait for players to join the Old Firm or move south of the border for confirmation of their quality.

Berti Vogts’ reign as manager of the Scottish national team was widely seen as a poor one. The German was notorious for handing out caps to many players while Scotland played out embarrassing draws with the Faroe Islands and Moldova. But amid all the tub-thumping criticism, Vogts’ experimentation did achieve some success. Not only did he lead the team into a Euro 2004 play-off after finishing second in their qualifying group, but he blooded several players that became integral to the national team in years to come.

Vogts capped Craig Gordon when he was a 21-year-old with Hearts and James McFadden when he was a 19-year-old plying his trade with Motherwell. He also brought the likes of David Marshall, Gary Caldwell and Darren Fletcher into the fold as teenagers. He showed little bias to players based on age, experience or employer; it was arguably as close to meritocracy and long-term planning in the selection process as Scottish football has got in the time since they last reached a major finals. Ultimately, Vogts was hounded out after less than two full qualifying campaigns due to a flurry of bad results. 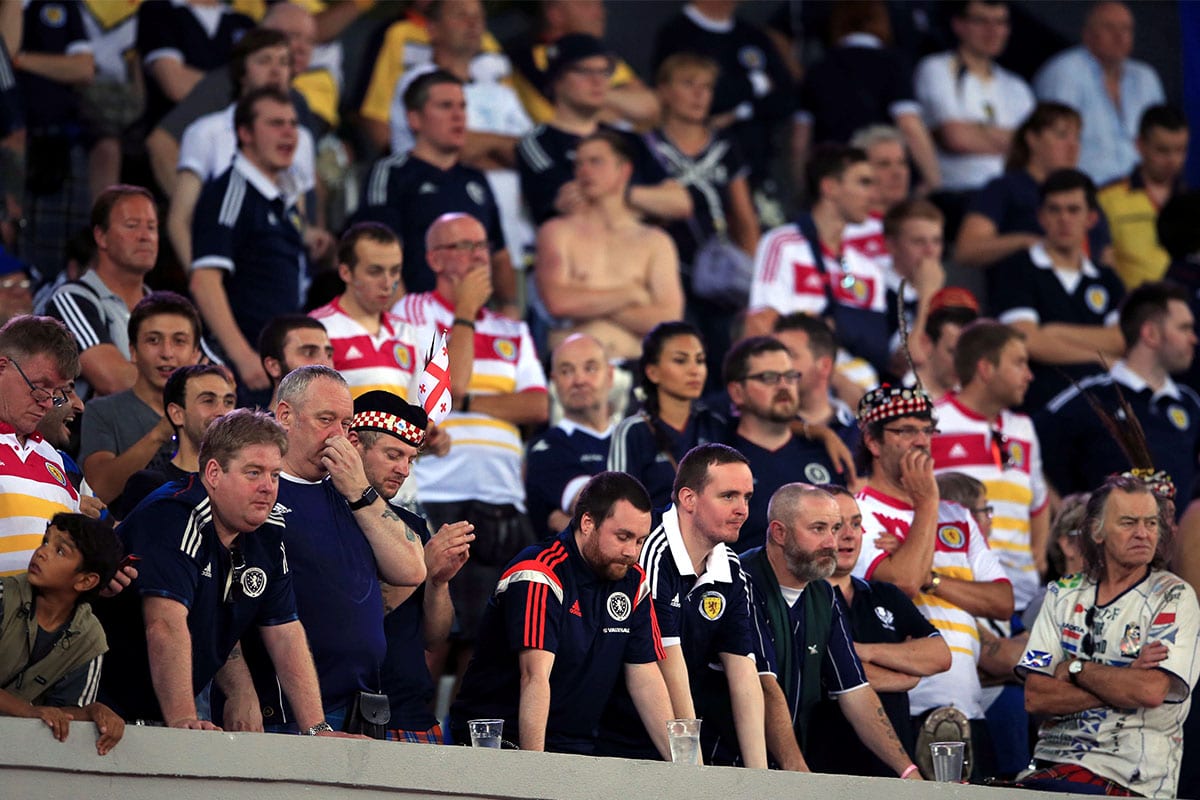 Scotland have chased results since his departure with little to no succession planning. After a ninth consecutive qualifying failure the time is ripe to revive some of Vogts’ ideals, perhaps with more local knowledge in their application. For inspiration, they need only look at Wales’ recent accomplishments.

While Scotland won’t be at Euro 2016, Wales will, fuelled by a generation blooded by John Toshack during his time in charge between 2004 and 2010. In this period he handed debuts to multiple teenagers, most of whom were playing in the second and third tiers of English football. Among Toshack’s debutants were Joe Allen, Gareth Bale, Chris Gunter, Wayne Hennessey, Joe Ledley, Aaron Ramsey and Neil Taylor. All have played a significant role in their country’s footballing rejuvenation.

The pool of talent extends to outside of Scottish league football, too. Ryan Gauld’s technique was so polished that Portuguese giants Sporting Lisbon swooped to sign him from Dundee United as a teen. He is now 20 and developing well but has yet to receive a call-up. He has been seen as the future for many years and Strachan should not let that peter out. In the English Championship there are three players who could fill problem positions for Scotland in Leeds centre-back Liam Cooper (24), Birmingham right-back Paul Caddis and Burnley midfielder Scott Arfield (both 27). All three have been ignored by their national team for reasons unbeknownst to this writer.

The draw for 2018 World Cup qualification has pitted Strachan’s Scotland with England, as well as Slovenia and Slovakia. It’s another difficult group, but Scotland shouldn’t aim to qualify from it. Instead, the next few years must be spent building a young core for the future, with 2020’s European Championships – and beyond – in mind. That means having a more inclusive selection process with more focus on players who play outside of England and Glasgow. It also means looking for younger players to lower the average age of the squad.

One of Scotland’s stereotypical national characteristics is bravery, but its football team has traditionally been risk-averse. Now, on the back of another poor campaign, a change in attitude is necessary. Strachan and his colleagues must be brave enough to forgo short-term results in favour of longer-term objectives such as youth development, succession planning and teambuilding that could see the national team better able to compete in future. The talent is there, Scotland just need to use it.