As Alex McLeish looks to end Scotland’s long wait for a major international finals berth, youth should be a factor. However, only nine of the players called into his national team squad for the upcoming friendly with Belgium and UEFA Nations League match against Albania are aged 25 or younger.

Once again, the onus is on experience and form over promise. While the selection of 21-year-old John Souttar, arguably the best centre-back in the country right now, is a positive, there remains a hesitancy when it comes to blooding prospects.

Here, we take a look at seven young players Scotland should be considering for Euro 2020 and beyond.

Handed his Rangers debut towards the end of the 2016/17 season, Bates was jovially nicknamed ‘The Ginger Sergio Ramos’ during his time in the Scottish Premiership. While at times he struggled within the chaos of Pedro Caixinha’s reign, the 21-year-old centre-back impressed enough to earn a free transfer to German second-tier side Hamburg at the end of last term.

Drafted straight into his new team’s starting XI due to injuries, he has since shown real promise at the heart of a back four. Fast and strong, he also appears to have the capabilities to suit Hamburg’s style of play.

Scotland under-21 boss Scot Gemmill believes the move abroad has already benefitted the youngster. “You can already see his game intelligence has developed,” Gemmill said. “He is…good enough to do what his coaches are asking of him.”

In the Bundesliga II, only Cologne have averaged more possession and completed more short passes per game than Hamburg so far this season. And, as he develops within a possession-based side, Bates could soon join Souttar and Celtic’s Jack Hendry in leading a new era of ball-playing Scottish centre-backs.

Motherwell have earned a reputation for their aggressive defensive style under Stephen Robinson’s auspices. This approach helped them to both domestic cup finals last season, and it also aided them to a thrilling 3-3 draw with Rangers this term in a game where Steven Gerrard’s side simply weren’t allowed to settle.

Campbell is the heartbeat of this strategy, running incessantly and pressuring opponents with an irritating frequency. In the opening four games of this Scottish Premiership campaign, only six midfielders have won more defensive duels per 90 minutes than his 9.62.

The Motherwell academy graduate is a box-to-box midfielder, but his skills are often put to use higher up the pitch when Robinson’s side look to force their opposition into mistakes in their own defensive third. In such situations, Campbell appears Scotland’s answer to Radja Nainggolan or Arturo Vidal.

If the Scottish national team wish to press effectively in advanced areas, calling Campbell into the squad is a must. The possibility of a midfield featuring him alongside the likes of John McGinn and Callum Paterson would be enough to concern the most composed of playmakers.

Henderson has never been one to shy away from the opportunity to play abroad. At the age of 18, he left Celtic for a loan spell with Rosenborg in Norway. And, after failing to establish himself in the first team at Parkhead, he left permanently for Italy in January of this year.

Joining Bari, the 22-year-old playmaker came under the tutelage of Italian former World Cup winner Fabio Grosso. Almost immediately, he became an integral part of Grosso’s team, helping them to a promotion play-off spot with two goals and two assists in 19 Serie B appearances. Then, after Bari were declared bankrupt, he chose to stay in calcio, signing for Verona.

A classy midfield technician, Henderson also proves that experience has nothing to do with age. He has already won the Norwegian league and cup, the Scottish Cup (with Hibernian in 2016), and has played his part in an Italian Serie B promotion chase. He has learned new languages and grown accustomed to different styles. “I think there’s a lot of tactical differences,” he said when comparing Italy and Scotland’s football cultures.

McLeish may have an abundance of gifted midfield creators, including Celtic star Callum McGregor, Fulham’s Tom Cairney and Southampton’s Stuart Armstrong, at his disposal already, but Henderson seems increasingly worthy of consideration.

Despite a minor defensive crisis for Rangers last season, McCrorie emerged with his reputation enhanced. Still a teenager and without any prior top-level experience, he stepped up to the plate and performed admirably in a difficult period.

The 20-year-old now has the opportunity to grow into his preferred position, central midfield, while playing for Gerrard, who was himself an iconic midfielder in his playing days. Discussing the prospect’s future, the Rangers boss suggested a return to centre-back was unlikely, saying: “If you toss them into…Old Firm derbies out of position, there is a risk you can damage people. Thankfully he is a very tough kid. I believe the club have a gem if he is…given the right guidance.”

Since Gerrard took over at Rangers, McCrorie has played either as a lone No.6 or as one half of a double pivot. The role allows him to be more involved in build-up, though he still has much to learn, particularly when it comes to adjusting his position to help the team play out from the back.

At present, the youngster sits behind Ryan Jack in the pecking order at Ibrox. But, given time, he should have the tenacity and control to succeed or partner the former Aberdeen man at club and international level.

Hearts have produced a copious amount of young talent in recent years, with 17-year-olds Harry Cochrane and Anthony McDonald among the most exciting to come into the first team at Tynecastle. However, this season they have been overshadowed by another academy graduate in Morrison.

At 19 years of age, the winger has quickly cemented a spot in Craig Levein’s plans with some outstanding displays both as a starter and when coming off the substitutes’ bench. He possesses real pace and the sort of aggressive dribbling style that is reminiscent of Celtic star James Forrest.

After four league games this term, Morrison is among the top 15 wingers in the Scottish Premiership when it comes to completed dribbles per 90 minutes. While those statistics come from a small sample size, they do hint at the ability he has in 1v1 situations.

Within Hearts’ versatile tactical setup he is likely to play as an out-and-out winger or as a right wing-back, where his mobility and energy help him to cover an entire flank. And, assuming he continues to get game time, he may soon be training alongside fellow speedsters Forrest and Bournemouth wide man Ryan Fraser in the Scottish national team setup.

Neil Lennon has lined his Hibernian side up in a rough 3-5-2 system for every single one of their Scottish Premiership games this season so far. This tactical decision has been enabled by the fast rise of Porteous, a 19-year-old centre-back with a surprising level of maturity.

Two seasons ago, the defensive prospect was on loan at Edinburgh City in the fourth and lowest tier of the Scottish Professional Football League. Now he is a vital component in the back line of one of the country’s top clubs. 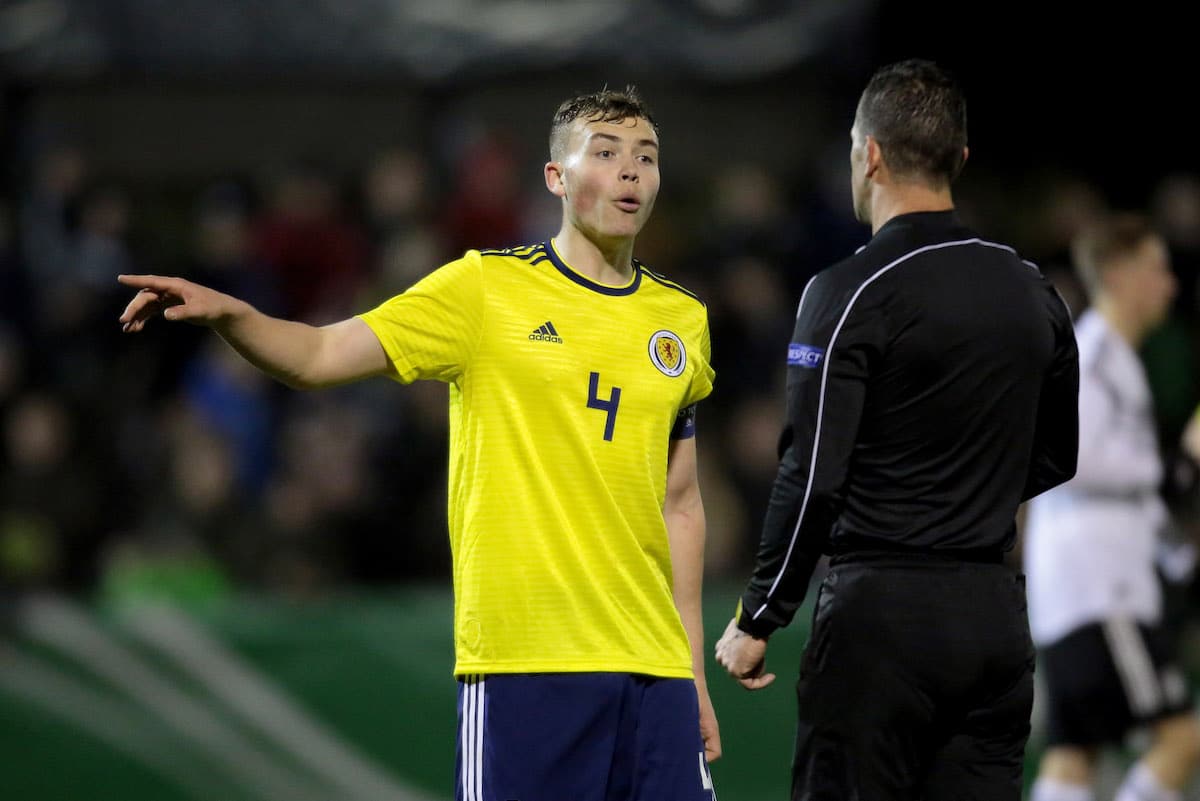 Operating primarily at the heart of Hibs’ back three, with two talented passers in Efe Ambrose and Paul Hanlon on either side of him, Porteous’ role is generally to circulate possession effectively – keep the ball, and keep the attack moving. But he is also a fine distributor over long range, playing the occasional penetrative pass out to the wings or forward to the attacking players.

There is a long line of young ball-playing centre-backs hoping to establish themselves in the Scottish national team, as discussed above. Yet, despite his relative inexperience, Porteous deserves inclusion on the list alongside Souttar, Hendry and Bates.

After top-scoring in the SPFL Development League in 2016/17 with 26 goals, Shaw broke into the Hibernian first team last season. In 16 league outings, he hit the net four times, showcasing a predatory instinct rarely found in young strikers.

Some disputed whether such form could be maintained throughout a full campaign, but so far in 2018/19 the 20-year-old shows few signs of slowing his roll. He has appeared in all four of his team’s league games, starting three, scoring two goals and assisting one. As it stands, he’s in the Scottish Premiership’s top 10 players for goals scored per 90 minutes played.

The problem for him might not be any technical deficiency, but competition for places. Over the summer, Hibs signed Florian Kamberi on a permanent basis and brought Jamie Maclaren back for another loan spell. Unless Lennon decides to start three strikers, Shaw isn’t going to be playing every week.

These circumstances might normally put a national team off but, in truth, now is not the time for Scotland to get picky over finishers. Outside of Swansea City’s Oliver McBurnie and Nottingham Forest’s Jason Cummings, there aren’t a lot of strikers under the age of 25 available for McLeish to consider.