Reliability is hard to come by in football with inconsistency plaguing even the best players. But there are players out there, usually unfashionable ones, who are the definition of consistency. They rarely put in man-of-the-match performances but, at the same time, they won't have a horror show.

They're a manager's dream and a supporters' nightmare, that is until they leave and only they do you fully appreciate that they offered. Think Park Ji-Sung under Sir Alex Ferguson at Manchester United and Dirk Kuyt during his time at Liverpool.

These players are a rare commodity but they do exist. It's why it's bizarre that not  one Premier League club has made a move to bring André Schürrle back to England this month. There have been tentative suggestions he is a West Bromwich Albion transfer target, beyond that, nothing.

It's been three years since the German International returned to the Bundesliga following an 18-month spell with Chelsea. Wolfsburg parted with £22million to bring him back. He took time to adjust but in his first full season at the Volkswagen Arena he nine goals in 29 appearances.

This form resulted in him making the jump to Borussia Dortmund in a deal reported to be in the region of £27million in the summer of 2016.

His time at the Westfalenstadion has been underwhelming. Injuries have resulted in him missing 35 matches and the 2011/12 Bundesliga champions had to find a way to play without him. Because of this, even when he's fit, he's not in their starting XI. The fact they've had three managers during his 18 months at the club hasn't helped.

With uncertainty comes opportunity. Premier League clubs, whether they're in the hunt for a European place or in a relegation battle, need reliability. Schürrle offers that. The 27-year-old may be considered a gamble due to his injury record since his move to Dortmund but, in the current market, he could be a bargain.

He has a point to prove with the World Cup just around the corner. Germany are blessed with many talented players but there is still a dearth of options when it comes to players capable of leading the attack. Though primarily a wide forward, Schürrle is versatile enough to play as a lone forward. He also operated in central midfield for Dortmund under Thomas Tuchel.

Playing time has been limited for the former Mainz player in recent seasons but he's still delivered when called upon. He's not an elite chance-getter but he's one of the most underrated in Europe as you'll see in the graphic below. 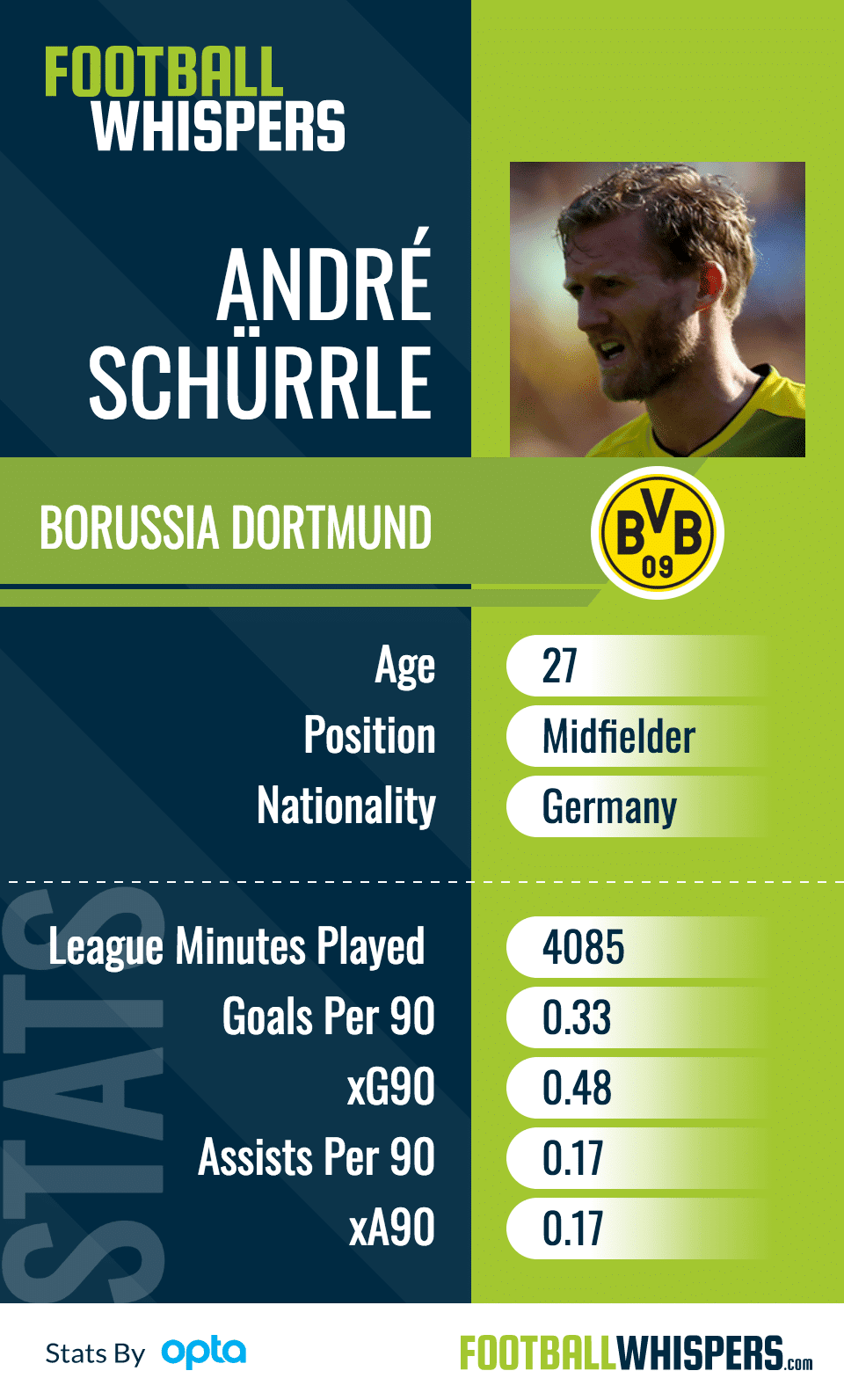 We've taken a look at Schürrle's last three-and-a-half seasons as a player. It includes his final six months at Chelsea before his move to Wolfsburg. The above stats are averages apart from the league minutes played. That's there for context. He's played the equivalent of 45 full 90-minute matches.

For starters, Anthony Martial, Christian Benteke and Sadio Mané, this season, all have a lower xG90 score than Schürrle's average over the past three-and-a-half campaigns. Different leagues, different clubs, different managers and different systems, yet he's still able to get himself into dangerous areas on a regular basis.

For greater context, his highest xG90 was during his final six months at Chelsea when he was averaging 0.68 per 90. That's higher than the averages for Raheem Sterling, Romelu Lukaku and Alexandre Lacazette this term. Furthermore, he's averaged a goal every three matches since the 2014/15 season, making him a reliable goalscorer.

As well as that, his xA90 is higher than Manuel Lanzini and James Ward-Prowse this season, two players often praised for their creativity. Not only does he find himself on the end of high-quality chances, he's already creating them.

Many claim that there is no value for money in the January transfer market but in Schürrle there is just that. He has a point to prove and he already knows the Premier League. Chances are scarce for those below the top six and he's the sort of player you want on the pitch if you're in need of a goal. He has a knack for being in the right place at the right time.

Tottenham Hotspur have taken a gamble with Lucas Moura, why haven't one of the teams near the top made a move for Schürrle? If West Brom do manage to bag him then they've upgraded their attack this month and should comfortably navigate their way away from a relegation battle.