Amine Harit’s burgeoning career has already required him to show adaptability and flexibility on and off the pitch.

His willingness to take on new challenges has catapulted him to a position where he’s part of one of Europe’s most lauded teams, and should also see him feature at this summer’s World Cup.

Harit was a key part of the Schalke side during an 11-game unbeaten run which has given them a platform to challenge for Champions League qualification.

Under inexperienced Italian coach Domenico Tedesco, the attacking midfielder has featured regularly in a side which has raised a few eyebrows across Europe this season.

The 32-year-old head coach has built his side around a formation which uses three centre backs and relies on wing-backs to provide the width as they assist in the attack and also help out in defence.

In the centre of the park the formation changes to suit the opposition, and Harit’s versatility in attacking midfield positions has seen the 20-year-old become a regular member of the continent's most impressive and recognisable teams

From Paris to Gelsenkirchen via Nantes

Born in the Northern Paris suburb of Pontoise, Harit has left his home city and even the nation of his birth to help find his identity as a footballer.

Having spent his youth playing for a number of Paris sides, including Red Star, Paris Saint-Germain, and Esperance 19th, he eventually moved west to Nantes in order to find his feet as a senior professional.

Harit's appearances there, plus some eye catching displays for the French youth teams at international level saw his reputation rise.

Playing beside Jean-Kévin Augustin, Lucas Tousart, and Kylian Mbappé, Harit was named in the team of the tournament when France won the UEFA European Under-19 Championship in 2016.

In the summer of 2017, Harit moved to Schalke for a fee worth up to €10m, which could prove to be a bargain. He was one of Tedesco’s first signings at the Bundesliga club, and the manager revealed the reasons behind their choice of player.

“Amine is a technically experienced player with strong dribbling skills who is also good in defense,” he said.

“He often looks for offensive solutions and can therefore make the difference.”

As well as moving from France to Germany at club level, Harit also switched countries at international level, opting to represent the country of his parents’ birth, Morocco, rather than France.

“I think it's important for me to thank the France team and the French Football Federation,” he said after making the decision.

“If I'm where I am today, it's thanks to the French national team.

“I wanted to explain my decision, it wasn't easy for me. My parents are Moroccan, I have my family and a lot of people in Morocco.

“I've gone to Morocco ever since I was a child to see my family. My choice today goes to Morocco, thanks or because of my family, because it was important for me to represent my family as they deserve.”

France’s loss is certainly Morocco’s gain, and they take an exciting team to the World Cup this summer where Harit will be hoping to play a pivotal part in any success they have.

They will by managed in Russia by Hervé Renard, another Frenchman, who will try to harness the talent in his squad as they look to progress from a difficult group which contains favourites Spain and Portugal, plus Iran.

The world will hopefully get to see what Schalke fans and Bundesliga followers witness week in, week out.

Harit has been working on his all round game since arrive in Germany, but his natural talents lie in a quick burst of movement on the ball, which he uses to create extra space. From these positions he’ll then beat the defender himself or use the channel he’s created to find a better placed team mate.

Good acceleration and abrupt changes of direction are accompanied by enough pace and dribbling skill to see him drive forward through a midfield, and decent ability with both feet despite being right footed can help increase his options.

This ability to roam and find the spaces on the pitch for himself and others can see him pop up anywhere in the opposition half, making him difficult to mark.

This touch map, , is taken from Schalke’s 2-2 draw with FC Köln, which was one of his better games this season, and shows his blanket coverage in attacking midfield areas. 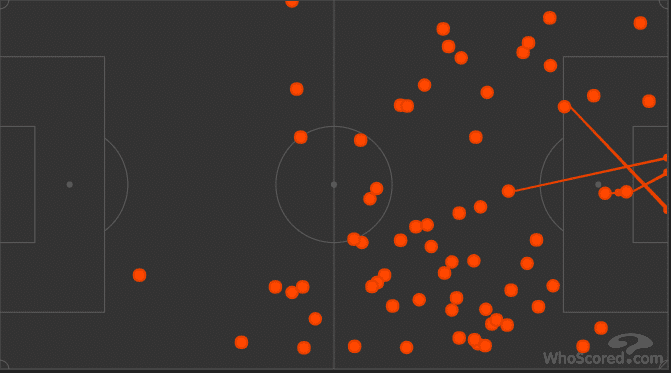 Harit also played a key part in one of the games of the season so far, when he and Leon Goretzka were introduced just after the half-hour mark following a disastrous opening 25 minutes which had seen Borussia Dortmund take a 4-0 lead in the Revierderby.

A derby match is always a good game to make in impression on fans, and Harit was able to do just that as Schalke went on to score four unanswered goals of their own which earned an unlikely point.

Harit proved too hot to handle for the Dortmund defence, scoring a goal of his own and winning six fouls for his side, fully justifying Tedesco’s bold first half substitutions.

He is also very effective at using a burst of speed off the ball, and has become a key part of Tedesco’s high pressing when the Gelsenkirchen side set up in such a manner.

Schalke have hit the rocks somewhat of late, but they remain in the running for the top four in the Bundesliga battle behind Bayern Munich, the runaway league leaders.

They have one of Europe’s best young talents on their hands in Harit, and while they’ll be wishing him every success in the World Cup this summer, if he impresses at the tournament there could be a queue of clubs ready to bid for him ahead of next season. Schalke could be set to make a tidy profit.