Still only 23, Atlético Madrid star Saúl Ñíguez has been regarded as one of the best midfielders in Europe for some time now, having burst on to the scene with Los Colchoneros in the 2014/15 season, helping Diego Simeone's men reach a second successive Champions League final.

Ever since, the Spanish playmaker has been linked with big-money moves to some of Europe's biggest clubs, including Barcelona and Chelsea, with Manchester United believed to hold a long-standing interest in the player and plotting a summer move, according to The Sun.

Who is Saúl Ñíguez?

Saúl was born in Elche and spotted by Real Madrid scouts at an early age, moving to the capital to join Los Blancos when he was just 11.

However, his time with the 12-time champions of Europe was short-lived, cast aside by the Bernabéu giants at 13. Determined to prove he could cut it at a major club, Saúl joined Real's great rivals Atlético Madrid and progressed through their youth ranks.

By the time he was 17, the young midfielder had become a regular with Atleti's B team, playing in the third tier of Spanish football, and a debut with the senior side came in March 2012, featuring in the last six minutes of a Europa League win over Beşiktaş.

The 2013/14 season, in which Atlético became La Liga champions, saw Saúl loaned out to Rayo Vallecano to gain senior experience. The then-19-year-old starred for the relegation-threatened side, even turning out at centre-back and excelling, showing he was physically and technically ready for a prominent role at the Vicente Calderón.

Saúl has now racked up more than 150 appearances for Atleti, playing in a number of roles – be it wide on either flank, as a defensive midfielder or as a No.8 with attacking license – and has become one of Diego Simone's key players.

What are Saúl's main strengths?

Saúl's main strength is pretty much whatever he decides to turn his hand to. Like the kid at school who seemed to dominate every athletic pursuit with ease, the 22-year-old has excelled in every role he has turned his hand to, expertly carrying out various tactical and technical tasks.

He can sit at the base of midfield and act as either destroyer or creator; he can play wide and add width and invention despite not being blessed with tremendous pace and he can conduct play and score goals when unleashed further forward.

One of Saúl's key attributes is his ability to find and exploit space, whether that's with an intelligent pass for a team-mate or a forward foray of his own. 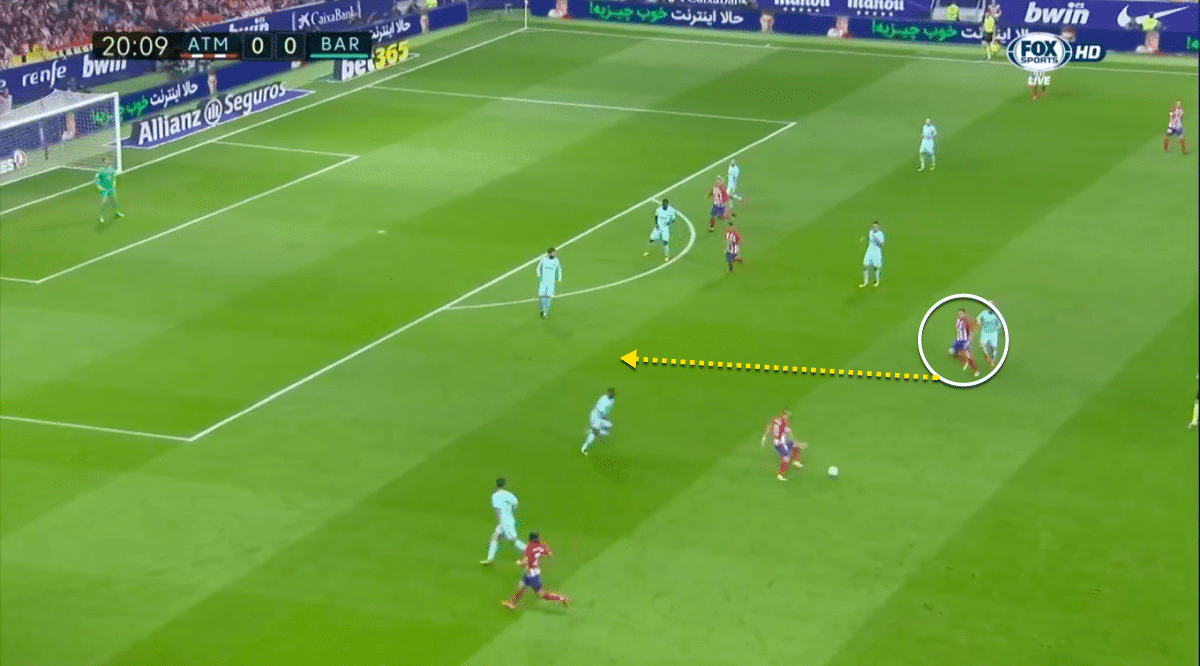 Above, taken from a recent game against Barcelona at Atlético's new Wanda Metropolitano stadium, Saúl's ability to find space between the lines was in full effect.

Breaking ahead of his marker, Ivan Rakitić, the Spaniard spots a pocket of space behind the Barça midfield and in front of the away side's defence. 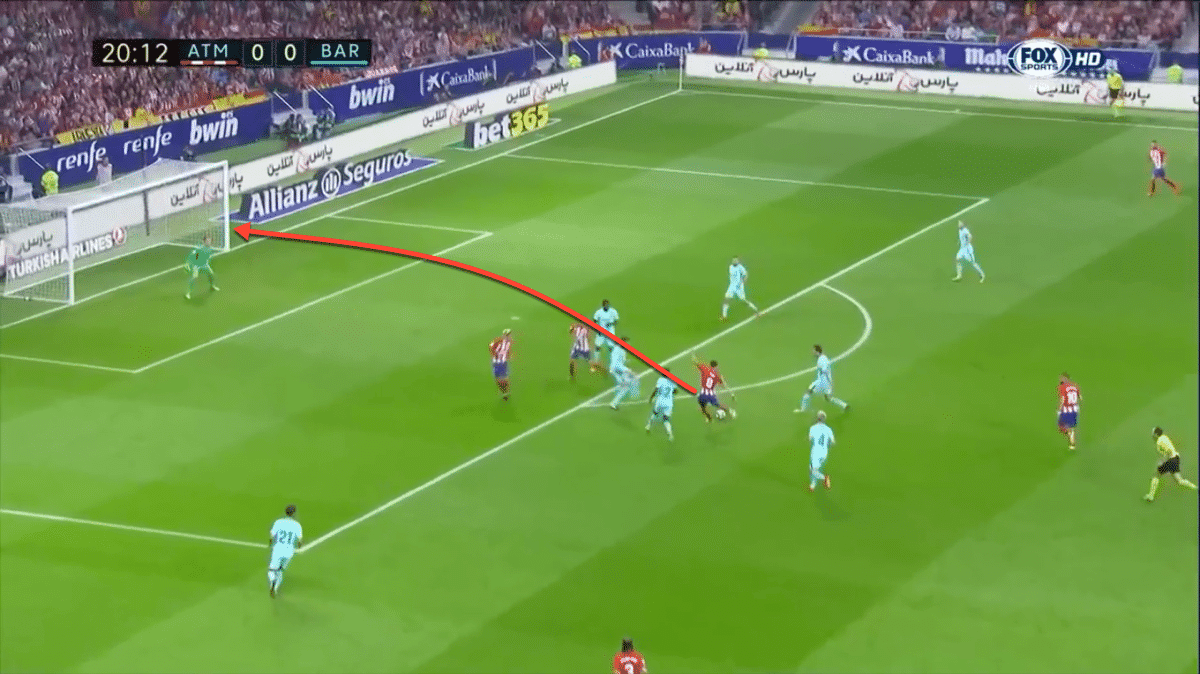 Picked out by a pass into feet, he quickly realises that Barcelona have numbers to his left and shifts the ball on to his weaker right foot to buy himself an extra split-second of time.

Then, with breathtaking technique, he bends the ball beyond Marc-André ter Stegen and into the bottom corner from 20 yards.

Saúl has a wonderful range of passing and is able to spread the ball across distance with either foot, but some of his finest work is done in confined spaces in the attacking third, as evidenced by his stunning solo run and finish in the Champions League semi-final against Bayern Munich two seasons ago, and this wonderfully inventive cross to assist Antoine Griezmann against Barcelona. 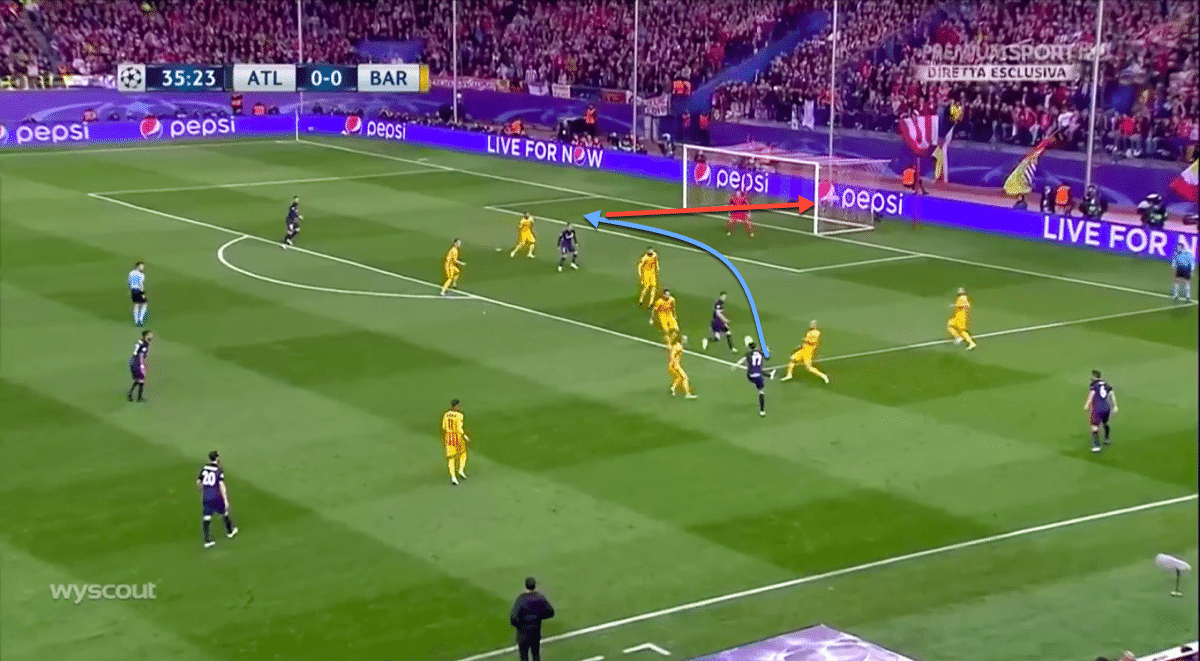 Receiving a bouncing ball on the corner of the penalty area, with little time to think, Saúl controls the ball with his thigh before using the outside of his left boot to swerve a sumptuous cross into Griezmann's path, playing the ball into the ‘corridor of uncertainty', where the keeper is unable to come to collect and the defenders fear deflecting the ball goalwards.

What are Saúl's main weaknesses?

In truth, despite that fact that, frighteningly, he is still getting better, Saúl has no obvious weaknesses. It could be deemed somewhat of a weakness that there is still some debate over his optimum position, and he may be in danger of becoming a Jack of all trades and master of none unless he settles into a single role over the next two or three years.

But the six-cap Spain international should hardly be criticised for the fact that he is so good in a multitude of positions.

If there is one aspect of his game that could do with further refinement, it is his tackling. By and large a fine ball-winner, Saúl occasionally goes to ground unnecessarily when attempting a tackle, leaving himself liable to being beaten by an astute dribbler and taken out of the game. 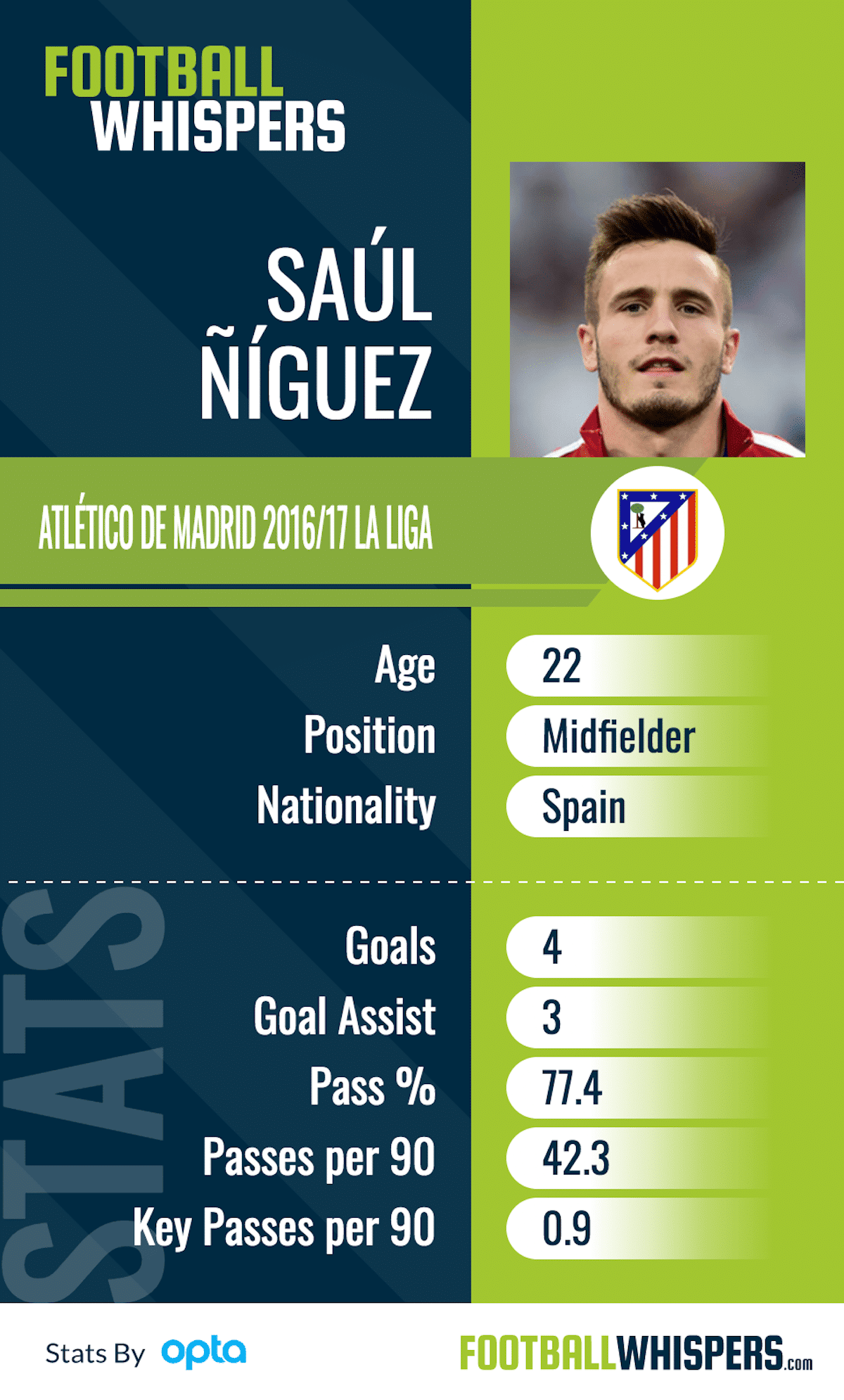 Saúl's raw stats don't leap out as being especially impressive, with a respectable yet not particularly high number of passes per game and pass accuracy, as shown in the above graphic for the 2016/17 La Liga season.

But this can largely be explained by the style of play espoused by Simone's men, with defensive rigidity prioritised and Atleti often happy to cede possession for large chunks of games and play on the counter, especially against high-calibre opposition.

How much is Saúl worth?

A new Atlético contract penned last summer took Saúl's release clause up to an eye-watering £134million, with Los Colchoneros in no mind to negotiate a lower fee for their prized midfield asset.

It is possible that figure could be reduced if Saúl becomes unsettled and sets his sights on a move away from the red and white side of Madrid, potentially upsetting the apple cart to force a move, but that seems unlikely at this stage.

However, in the current market, where prices in excess of £100million look set to become commonplace, splashing such a sum on a player of Saúl's age, ability and almost unlimited potential may just come to represent value, perverse as it seems.

Arsenal's soft centre has been costing them dearly for several seasons. Aaron Ramsey is performing superbly, but the same cannot be said of Granit Xhaka and the soon-to-be-out-of-contract Jack Wilshere, with Mohamed Elneny a reliable back-up but lacking the quality to start weekly.

Signing a player of Saúl's unquestionable quality would be a huge statement of intent from the Gunners, instantly upgrading their middle third and sending a message to rivals that they will not be lying down and accepting a place outside the top four for years to come.

And, at an athletic 6ft, Saúl fulfil's physical requirements of the Premier League. He's the total package as a central midfielder and could transform Arsenal's fortunes.