The opening weeks of the 2018/19 season have been kind on Chelsea fans.

Their side is playing entertaining attacking football under a forward-thinking manager. Eden Hazard is in the best form of his career at Stamford Bridge. And an unlikely tilt at the Premier League title seems possible.

And yet there is one fairly large area of concern for Blues supporters; the lack of goals from their strikers.

We're almost two months into the campaign and Álvaro Morata and Olivier Giroud have a solitary strike between them, which was netted by the former against Arsenal on August 18.

Results haven't been affected as yet. The Blues are unbeaten in the top flight, largely thanks to the brilliance and increasing goal threat from their No.10. But it's not sustainable if the Blues are to mount an unlikely title bid.

New Blues coach Maurizio Sarri was asked about the his side's dependency on Hazard after the Belgian struck his sixth goal in seven Premier League games in the 1-1 draw with Liverpool.

“Maybe [we're dependent], but I think by the end of the season, we can have four or five players on more than ten goals,” he said. “It is not only Hazard. Hazard is the top but Pedro, Willian and Morata will score more than ten.”

The omission of Giroud by Sarri shouldn't be dwelt on as it's likely to be a simple oversight on the Italian's part. But his faith in Morata is clear, and that is despite the Spaniard having only netted four times in all competitions from the turn of the year.

Is that belief justified, however? Can Giroud and Morata chip in wth ten plus goals this season across all competitions? We have looked into their early season form to find out.

Sarri's side servicing the strikers

Given the attacking verve of Sarri's Chelsea side, the starting frontman, be it Giroud or Morata, is rarely starved of the ball.

But the two do play different roles when picked. The Frenchman is often a facilitator for Hazard, creating space for the Belgium international to wreck havoc.

When he does threaten the goal, though, it's often from inside the penalty area, as the below shot map highlights. 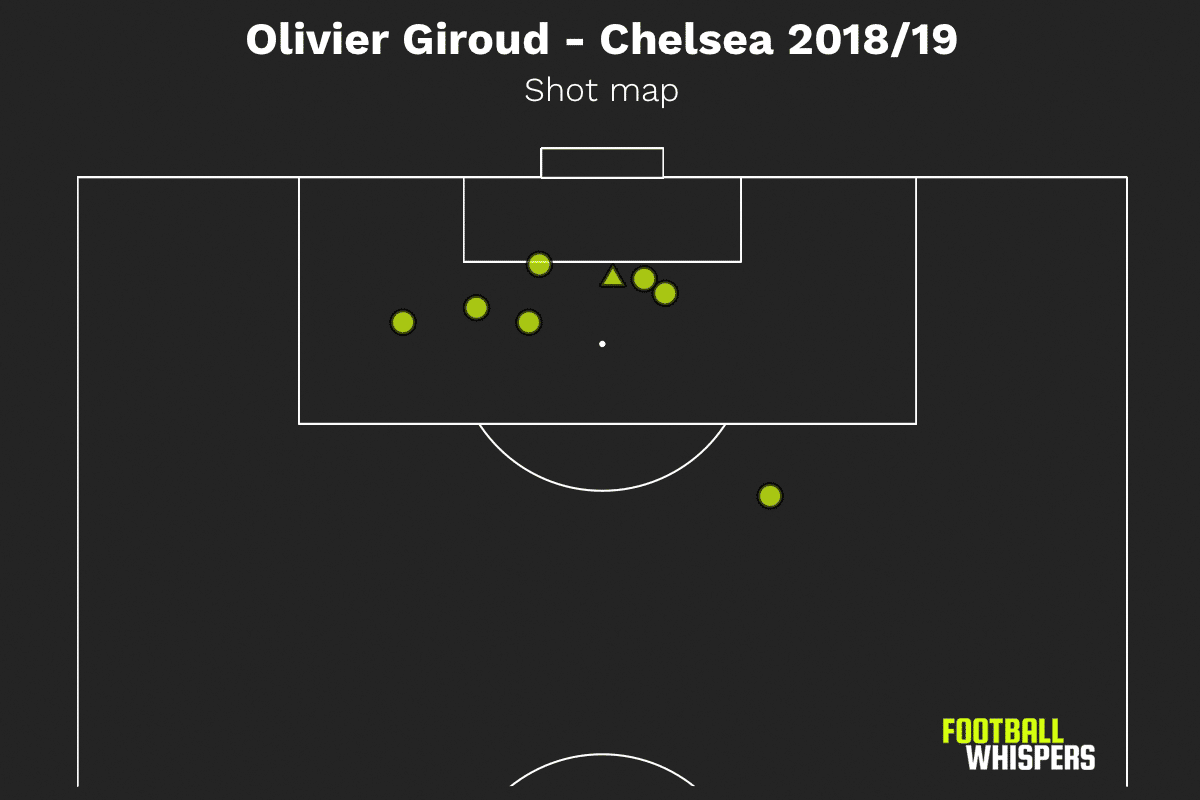 For those wondering, the triangle indicates a headed opportunity. Many associate Giroud with being aerially dominant so it's something of a surprise to see that the former Arsenal star has only threatened goal once with his head.

The Frenchman at Chelsea isn't used as a battering-ram target man – long passes forward and crosses aren't played for him to attack. Instead it's the nuance to his game that is leant on.

His xG per 90 isn't too shabby either, at 0.5. So the only problem, so far, is that Giroud hasn't been clinical when opportunities have fallen his way. Something he must change.

Morata, stylistically, is very different. He is far more likely to stretch defences and attempt to dribble past opponents. So naturally he will find himself in different areas of the pitch than Giroud.

And his shot map, below, is far more varied – or, if you were being harsh, erratic – than Giroud's. 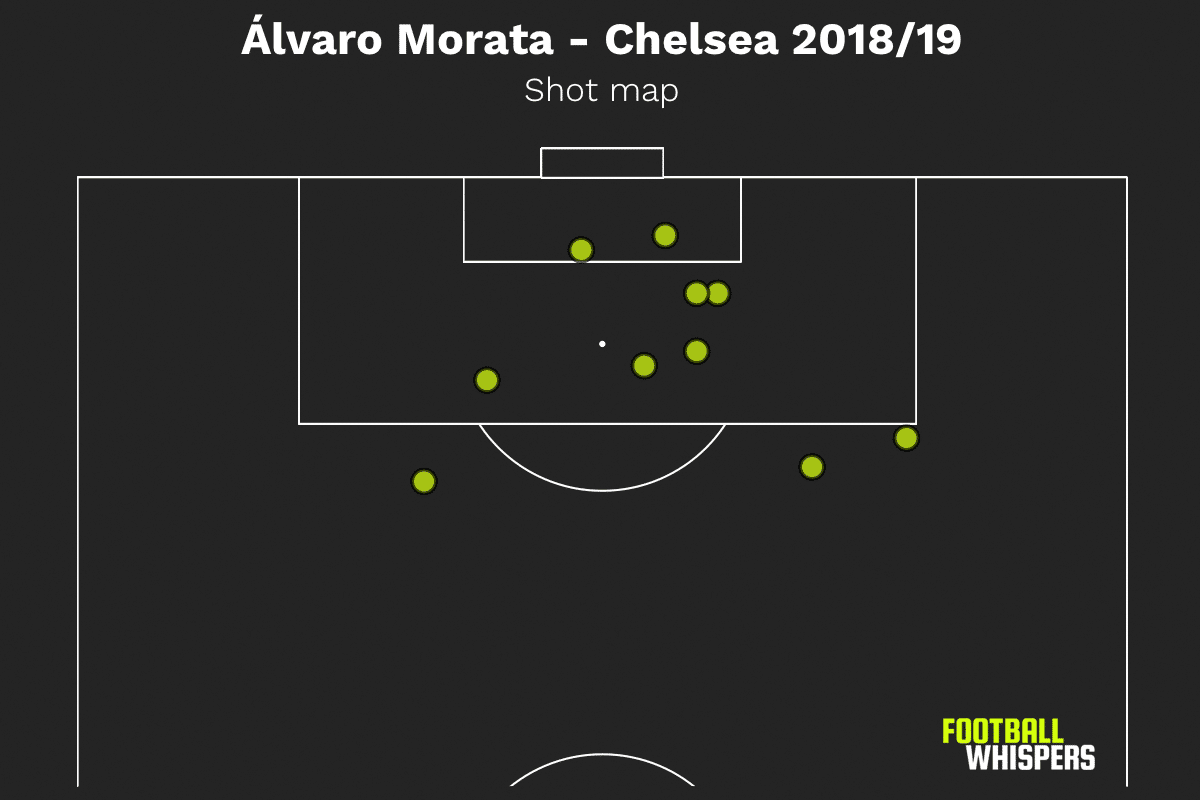 Such a random shot selection often indicates a striker short of form and confidence, which Morata certainly is. Yet his underlying xG is, slightly, ahead of Giroud, although he has played 50 more minutes in the Premier League.

The Spain international's xG per 90 for the top-flight campaign is at 0.54, so he is getting more chances, marginally, than his teammate. But exactly like Giroud he isn't taking them.

Profligacy in front of goal can be tolerated if, for example, a striker is supporting his teammates effectively. It's what Giroud does better than most, at club and international level.

But Morata's xA90 is a measly 0.01 while his passes per 90 is 15.3. Simply put, if the former Real Madrid man is not scoring regularly – as is the case at the moment – then he's doing little else. It's why he has found himself playing second fiddle to Giroud.

Ultimately, however, goals are the currency in which strikers deal. And both are at the moment are cash poor. While it's early in the campaign Sarri, while unflinching in his support publicly, will know more is required from his front two.

The Italian's system is built to bring the best out of a frontman. At Napoli, Gonzalo Higuaín and Dries Mertens were prolific and led the club's assaults on the Serie A title.

Morata and Giroud are, bluntly, not of the same quality as the aforementioned pair. But they are still good enough to be making more of an impact, even if the duo are lacking confidence.

If they fail to improve in the coming weeks, however, then Sarri's side are likely to falter. Hazard can't carry the goalscoring burden alone, nor should he be expected to.